Making sense of the orthoptic assessment
By Joe Smith

Following the Specialty Trainee article on this topic in the February/March 2020 issue, Joe Smith provides a more detailed breakdown of the orthoptic report.

Orthoptists investigate, diagnose and manage a wide variety of patients with varying problems. In this article, I will discuss the common tests orthoptists perform and how you can interpret the findings.

This should be assessed with the patient wearing their most up-to-date refractive correction and uniocular VA recorded if possible. It is also important to assess binocular VA in conditions such as nystagmus and convergence / accommodative spasm. Near VA should also be assessed in patients with accommodative problems, nystagmus and those that are undergoing amblyopia treatment. If a head posture is present, vision should be tested with this and noted down. A range of tests other than the standard LogMAR and Snellen charts are used to test the vision of babies, children and those with specific needs.

Often with babies and non-verbal patients, we will check their fixation, and ability to follow a light and target. Another test is observing any objection to occlusion of a particular eye, as this may indicate reduced vision if they object to only one eye being covered. If possible, we will also perform a vision assessment with Cardiff acuity cards or a forced-choice preferential looking (FCPL) test. FCPL tests are done by observing whether the patient looks at a blank side or a side with stripes / pictures, and their level of vision is recorded in cycles per degree. Although these tests are age appropriate, they can overestimate VA. A crowded test is more sensitive at identifying amblyopia, therefore, once a patient is capable they should be tested using a crowded picture or letter test (with a matching card if required).

The CT is used to identify the presence of a phoric or manifest deviation. An alternate CT will help identify any phorias’ and a cover-uncover will identify manifest deviations. The patient should be asked to fix on a light and then accommodative target, to identify any accommodative deviations. Appropriate time should be given to allow the patient to fix on the target and allow dissociation. The CT should be completed at near (1/3m), in the distance (3-6m) and at a far distance (>6m). The CT should also be performed with and without spectacles, and with and without compensatory head posture, with any changes documented. Orthoptists use a range of abbreviations for their findings, the commonly used terms are included in Table 1.

If a patient has a squint, the eye with the squint should be noted along with the size of the deviation and whether diplopia is present, for example, small right esotropia without diplopia. A comment should be made about their fixation. For example, can / cannot take up central fixation and if fixation is held for how long. If a patient cannot take up central fixation this may indicate severely reduced VA or a mechanical restriction. Similarly, if a patient can hold fixation this may indicate good VA, whereas amblyopia is indicated if fixation cannot be held. If a patient has a phoric deviation, a comment will be made about their ability to control it. For example, if well controlled it may be good or rapid recovery, if slightly reduced it may be fair, and if they become manifest or get diplopia it may be delayed or poor.

The OM assessment is used to identify any muscle weaknesses or eye movement disorders.

Figure 1: The patient should follow the light into all eight of these
gaze positions, and versions and ductions assessed.

Smooth pursuits are tested with a light held approximately 50cm away from the patient and with the patient’s head stationary whilst they follow the light into eight positions (Figure 1). Versions are tested by asking the patient to follow the light and observing the eyes for any change in deviation and performing an alternate cover test in each position. Ductions should also be tested by occluding one eye and assessing the degree of further uniocular movement. In neurological conditions the duction movement will be greater than the version, however, in mechanical cases, there will be an equal degree of movement.

Orthoptists record muscle over-actions as plus numbers, and under-actions or limitations as minus numbers. Movements are graded from -4 to +4, with zero representing a normal movement. If a movement into a specific position is limited / restricted it will be recorded as a shaded area, this indicates that the duction is not full. Table 2 highlights the things you should be observing and asking during your ocular motility assessment, and Figure 2 shows how some common conditions would be diagrammatically recorded.

Table 2: Observations and questions during the ocular motility assessment. 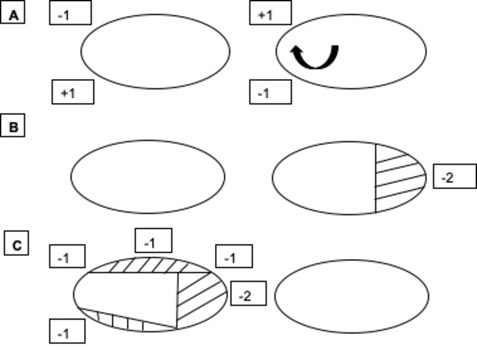 Saccades are tested by asking the patient to make a fast eye movement from one target to another. This is done by holding two targets either side of the visual axes and asking the patient to look quickly between the objects. The best way to compare the saccades is to look at the patient’s nose whilst assessing saccades. This test should be performed horizontally and vertically, and can also be done obliquely but this is less common. The speed, latency and accuracy of movement in each direction should be noted. Any fatigue should also be documented as this may indicate myasthenia. When assessing saccades a patient’s head should not be held still initially, as head movements may indicate a problem with the initiation of saccades, for example, ocular motor apraxia.

Saccades are of particular use in the differential diagnosis of neurological and mechanical conditions. Mechanical conditions will never cause the speed of a saccade to be reduced, whereas, in neurological conditions, the speed will be reduced. However, the speed of a saccade will only remain reduced in the acute phase for peripheral palsies (unlike central palsies). Wong et al [1]. showed that in cases of peripheral sixth nerve palsy velocities became normal, within two months of onset, despite persisting abduction limitations. Saccades may, therefore, be of less use to the differential diagnosis of long-standing cases.

Dolls head or vestibular-ocular reflex testing is tested by getting the patient to fix on an object whilst their head is moved horizontally and vertically. A normal result for Dolls head would be the patient remaining fixed on the object, by their eyes making equal movements in the opposite direction. This test is particularly useful in the differential diagnosis of supranuclear conditions, in which the degree of movement will increase when tested. The test is also useful in the differential diagnosis of infantile esotropia and sixth nerve palsy in young children, in cases of infantile esotropia abduction will be full when tested.

The optokinetic system can be tested by using the OKN drum. This test is particularly useful to look for convergence-retraction nystagmus in cases of suspected Parinuad’s syndrome, and the drum should be rotated downwards to exhibit the nystagmus and inaccurate saccades on attempted elevation.

Convergence is a disjugate eye movement that is required to maintain binocular single vision (BSV) whilst fixating on a target that is moved towards the nose. The near point of convergence is routinely tested in all patients during an orthoptic assessment. This may be tested with an accommodative target or more objectively with the RAF rule. There is a range of possible responses:

There are different stages to BSV that orthoptists will examine during their investigations. These are simultaneous perception, superimposition, fusion and stereopsis.

Simultaneous perception and superimposition are tested by using the Bagolini or the Worth Four Light Test. If a patient can do both of these tasks, they will have sensory fusion, however, in cases of strabismus, a patient may suppress one eye or give a diplopic response. In these cases, the patient’s angle of deviation should be corrected in free-space, and their ability to achieve sensory fusion noted.

Motor fusion is the ability to maintain BSV whilst making vergence movements. This is assessed by performing a prism fusion range (PFR). The PFR is performed horizontally (base out and base in) and vertically (base down and base up) using prism bars, and recorded in prism dioptres (PD). This is particularly useful in the differential diagnosis of long-standing and recently acquired fourth nerve palsies. In cases of long-standing palsies, the vertical fusion range will be extended.

Stereopsis is the ability to perceive the relative depth of objects in a 3-dimensional structure. There are a range of different stereopsis tests available in the UK. Commonly, the Lang is used for young children and the Frisby or TNO Stereopsis Test for adults. The result will be recorded in seconds of arc (“), and a smaller number indicates a higher grade of stereopsis.

If a patient has a manifest deviation and they are unable to demonstrate any stage of BSV in free space, then the synoptophore is used. All stages of BSV can be tested on the synoptophore by correcting the patient’s angle of deviation. If BSV cannot be achieved, then it is essential to perform the post-op diplopia test (PODT). This is assessed by using prism bars to fully correct the angle of deviation, and then by under- and over-correcting the deviation by 20PD. However, if the patient’s angle of deviation is >45PD, it is more accurate to correct the deviation using botulinum toxin, to assess the risk of diplopia [2].

Phoric and manifest deviations are measured by using the prism cover test (PCT). The PCT is performed with a prism bar whilst performing an alternate cover test on the patient. This strength of the prism is increased until no movement is seen on the cover test. The test should be completed with and without spectacles, to identify any accommodative deviations, a difference of 10PD between these measurements indicates an accommodative deviation.

The test should also be completed at near (1/3m), in the distance (3-6m) and at a far distance (≥6m). These tests will help classify any distance specific deviation. For example, intermittent distance exotropia’s and sixth nerve palsies will measure more at distances >3m. In some cases a PCT is not possible, for example, patient’s with VA <1.0LogMAR, eccentric fixation and young children unable to fixate on a target. In such cases, measurements can be obtained by the use of corneal reflections, however, as these tests are not dissociative the full angle of deviation is often not measured.

The measurements can also be completed on lateral gazes, elevation and depression. In these different positions, spectacles should be removed so they do not prevent adequate fixation. An increase in the angle of deviation in a specific direction of gaze will help assist in the diagnosis. For example, if the patient’s eso-deviation increases of left lateral gaze, this helps support the diagnosis of left sixth nerve palsy but it does not confirm it, as it could also increase due to a mechanical restriction.

The upright-supine test should also be performed to differentially diagnosis a vertical deviation from a skew deviation. This is assessed by performing a PCT in the upright- and supine-positions. A positive result indicating skew deviation is a reduction in the deviation by ≥50% [4].

The angle of deviation can also be measured in nine-positions of gaze using the synoptophore. As well as measuring the horizontal and vertical angle of deviation, torsion can be measured using the synoptophore. This is particularly useful in cases of fourth nerve palsy, if the patient cannot achieve BSV in free-space or if they are going to have surgery. Alternatively, torsion can be measured using Maddox double rod or torsionmeter. 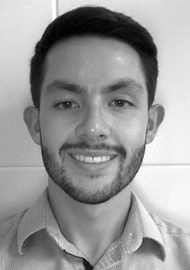