A few months ago a retired lady presented for second eye cataract surgery. I noted on the pre-op ward round that the outcome of her first eye’s surgery looked like a refractive surprise as her spherical equivalent in that eye was more than +2 diopters. This rendered her anisometropic and indeed asthenopic with her other eye being moderately myopic around -2.50D.

Although I noted the less than favourable outcome, it was my consultant who immediately spotted why this had happened. The intraocular lens (IOL) that was circled on the IOL master was not the one that we routinely used in this hospital. Our standard IOL that was implanted instead with that circled power was therefore too weak, unintentionally rendering the patient hyperopic in this eye.

How can this event and others of the like – which in the current debate at the Royal College, are termed a ‘never event’ – be prevented in the future?

One would think that if only one IOL type was on the print-out of the IOL master, this confusion may not have arisen. But although before every operation this department runs through a World Health Organisation (WHO) checklist, including a cataract specific IOL check, a mistake still happened.

Nowadays, when we drive into the unknown it is mostly with the comfortable assistance of a GPS device that tells us where to take turns so that we can actually enjoy the journey, putting an end to the tiresome fights with our other halves we used to engage in when his or her map reading was incorrect. Similarily, would it not be nice to free our minds from the worry of having chosen the right IOL and instead be guided to the right IOL by some sort of a GPS during surgery?

This is indeed what some authors claim would be possible with intraoperative wavefront aberrometry (IWA) during cataract surgery, especially in challenging cases, like after previous corneal refractive surgery [1].

Building on the pioneering work of Heinrich Hertz in the 19th century we know that light is composed of electro-magnetic transversal waves, the outermost layer of which is called a wave front. Passing light through the human optical mediae, a WA device can calculate the respective refractive error by looking at how the wave fronts get aberred, hence the name wavefront aberrometry (Figure 1). 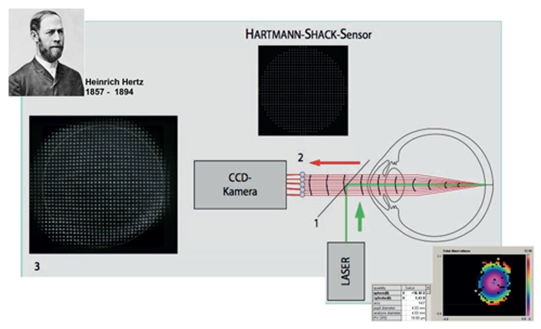 In the Hamburg refractive research group, of which I am a member, we wanted to find out how reliable such intraoperative refraction really is and how well it could be applied to calculate the right IOL on the table during surgery [2]. IWA refraction with a Hartmann-Shack prototype that was attached to the operating microscope was recorded at seven defined measurement points during standardised cataract surgery in 74 eyes.

Interestingly, measurements succeeded only in little more than every second attempt. The average quality score over these measurements was 42.49% (SD 18.18%). However, the limits of agreement of repeated aphakic spherical equivalent (SE) readings, being +0.66D and -0.69D, seem too large if one wanted to base an intraoperative IOL calculation on WA.

With regression analysis we generated two IOL formulas to predict the emmetropic IOL, only based on the IWA refraction (formula i) and additionally on the axial length (formula ii). The refractive outcomes we achieved with these were better than when we put our data into three existing aphakia formulas, which were derived from autorefractive retinoscopy [3-5], but not as good as conventional biometry with the Haigis formula. Impacting factors on the vulnerable IWA readings are, in our view, topical anaesthesia, corneal and vitreous hydration, eye movements, and most importantly, varying anterior chamber (AC) depth, corneal curvature and axial length during surgery. We argue that more efforts are required to improve the precision of measurements before IWA can be used to inform the surgical refractive plan in cataract surgery.

Coming back to our patient, she herself was not aware that a mistake had been made but realised that her new glasses, although things looked clearer in the operated eye, caused a headache. I was impressed by how the consultant handled the situation as he bluntly admitted that we made a mistake, explaining it in full detail and offering his sincere apologies. He did this in such a gentle and diplomatic manner that the patient did not even seem to contemplate complaints or litigation. She didn’t object to needing glasses, so after further discussions and a rescheduled operation aimed to match the first eye’s refraction, she has excellent vision in both eyes, albeit with bilateral moderate hypermetropic correction.