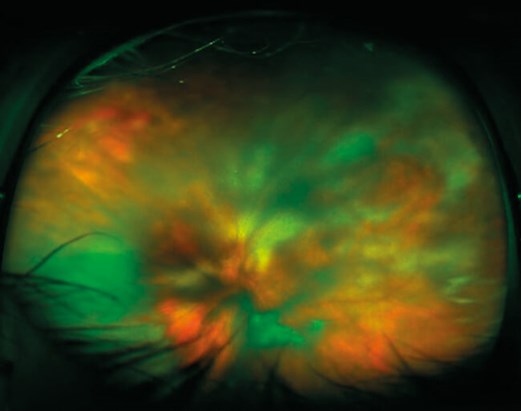 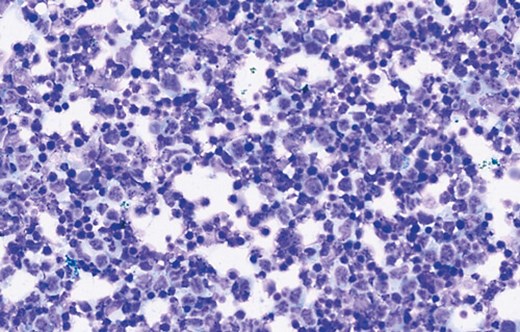 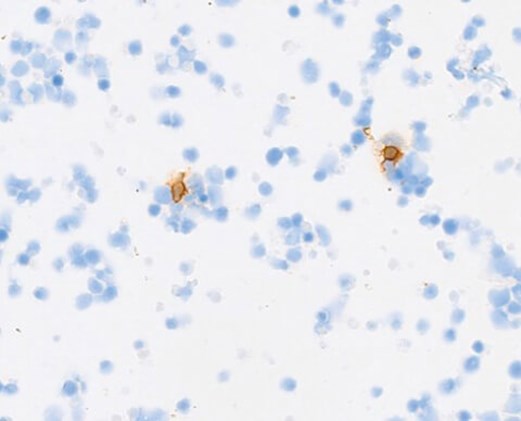 1. The cytospin shows numerous blasts (black arrows) with large atypical nuclei and prominent nucleoli on a lytic background. The appearances are consistent with a high-grade lymphoma. Note: scattered background pigment can be seen as the lymphoma cells disrupt the overlying retinal pigment epithelium (RPE).

3. Representative panels show the neoplastic B-lymphocytes (blasts) staining positively for CD20. There are very occasional reactive T-cells (CD3+) and macrophages (CD68+) seen in the background. The histomorphologic and immunohistochemical features are those of a DIFFUSE LARGE B-CELL LYMPHOMA. Furthermore, immunoglobulin heavy chain (IGH) and immunoglobulin kappa light chain (IGK) gene analysis by polymerase chain reaction (PCR) revealed a monoclonal B-cell population. Approximately 70% of vitreoretinal lymphomas are reported to harbour a MYD88 mutation. Although this was not undertaken in this case, it is increasingly being performed in diagnostic labs (Bonzheim I, et al. High frequency of MYD88 mutations in vitreoretinal B-cell lymphoma: a valuable tool to improve diagnostic yield of vitreous aspirates. Blood 2015;126:76-9). The patient was referred to the haemato-oncology team and received three courses of bilateral intravitreal methotrexate injections. Chorioretinal atrophy was noted, with no new / active chorioretinal lesions, at the last follow-up.