Usefulness of gonioscopy to investigate cause of corneal oedema after cataract surgery
By Jack Bradbury, Corrado Gizzi and Anant Sharma

A 72-year-old man with ocular hypertension presented three months after routine right phacoemulsification and toric intraocular lens (IOL) implantation with a two-week history of an irritated right eye and a sudden deterioration in right vision. His preoperative spherical equivalence was emmetropia, and the nuclear cataract was moderately dense. 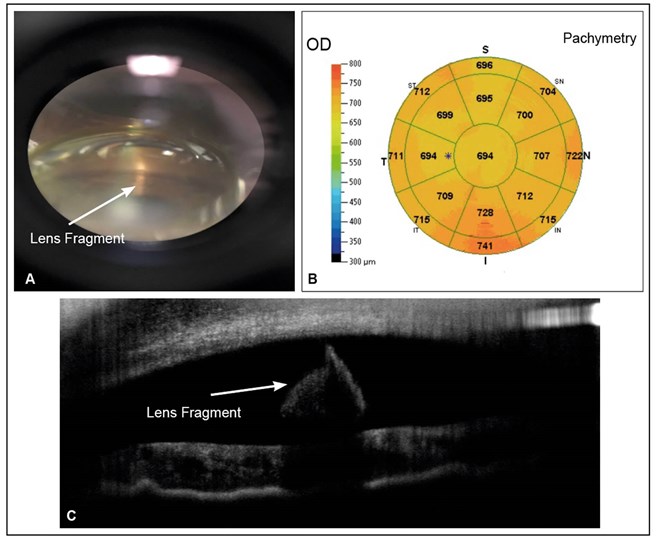 Ocular examination showed significant generalised corneal oedema of the right eye, with visual acuity reduced to 6/36 unaided from 6/7.5 postoperatively. On slit-lamp examination, the anterior chamber appeared deep and quiet. Intraocular pressure (IOP) of the right eye was elevated (30mmHg) but was normal for the left eye (15mmHg).

Gonioscopy revealed a small retained lens fragment inferiorly as a possible cause of this patient’s corneal oedema, consistent with the pachymetry which showed the inferior corneal oedema was greatest. He was initially given a short course of Virgan (ganciclovir) as viral endotheliitis was a differential diagnosis, and he was started on Maxidex (dexamethasone) drops hourly and Cosopt (dorzolamide + timolol) twice a day.

The fragment was planned to be removed surgically, but it resolved after three months of Maxidex drops. Maxidex was stopped and the patient’s oedema did not return. However, he remains on Cosopt to control his ocular hypertension.

This case highlights some key learning points. When a patient presents after routine cataract surgery with evidence of reduced visual acuity or corneal oedema, a retained lens fragment should be considered.

Retrospective studies of patients with retained lens fragments have shown that reduced visual acuity and corneal oedema may be seen in over 40% of cases [1,2], and anterior chamber inflammation is present in the vast majority of cases [1]. In these studies, retained fragments were identified by slit-lamp examination most commonly, but some required gonioscopy. Even large fragments in the angle may not be seen on direct slit-lamp if, for example, corneal arcus or scarring are obscuring the view.

In these studies, the time between cataract surgery and identification of the retained lens fragment ranged from one to 182 days postoperatively, with a mean time of 38 days according to Hui et al. [1].

Importantly, each of these retrospective studies [1, 2] report that every patient identified was refractory to medical management, including with intensive steroid drop regimens. Most of these patients required lens removal, and in the majority of cases a good outcome was achieved, visual acuity improved, and corneal oedema resolved. Our case improved with medical management only without need for surgical intervention and this may be because it was a small fragment.