Lacrimal drainage system tumours are rare and lymphomas account for less than 10% of these tumours [1]. Most patients presenting with lymphoma infiltration of the lacrimal drainage system have a history of previously diagnosed lymphoma elsewhere. We report a case of lymphoma presenting as non-resolving dacryocystitis in a patient without any prior history of lymphoma. Our case is an unusual presentation of a rare disease which illustrates important history and examination features that can be used to identify worrying features in the general assessment of lacrimal lesions.

A 66-year-old woman presented to the eye emergency department with a one month history of swelling over the right-side of her nose. The patient had also noticed a small lump in front of the right ear. On direct questioning the patient also reported a one month history of right sided epiphora. The patient did not report any history of blood stained tears or nasal congestion. Examination revealed a raised, erythematous, slightly tender swelling over the lacrimal sac which did not extend above the medial canthal tendon. There was also evidence of a pre-auricular lymph node swelling. The impression was that of right dacryocystitis and the patient was treated with oral co-amoxiclav, warm compresses and she was referred to the lacrimal clinic.

The patient again presented to the emergency eye department four weeks later. She reported that the swelling, although showing some improvement at first with the treatment, had now enlarged. The patient did not report any pain and was systemically well. Examination revealed a tense, large, erythematous swelling and enlarging of the pre-auricular lymph node. The impression at this time was that of severe dacryocystitis with lacrimal sac abscess and drainage was attempted through the skin with a 21 gauge needle. No fluid could be aspirated and the contents were firm. 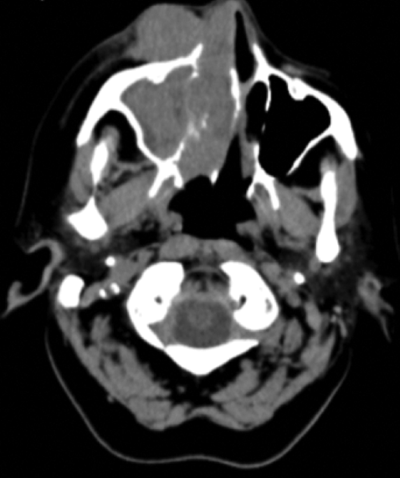 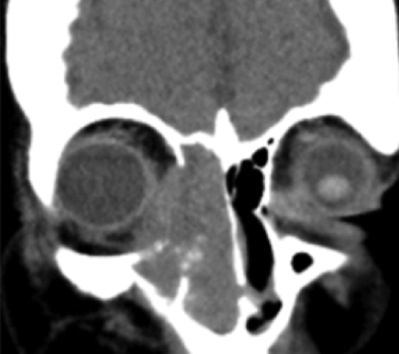 The patient was further investigated with CT head and orbits. The scan showed an intraorbital soft tissue mass with extension into the right maxillary, sphenoid and ethmoidal sinuses and into the medial orbit (Figure 1). A biopsy of the right nasal mass was taken and reported as large cell non-Hodgkin’s lymphoma on histopathology examination. The patient underwent CHOP chemotherapy (cyclophosphamide, doxorubicin, vincristine, prednisone) followed by local radiotherapy.

This case is an uncommon presentation of large B cell lymphoma presenting with what was thought to be dacryocystitis. The case illustrates potential worrying signs and symptoms that should alert the clinician to an alternative diagnosis.

The mucosa of the nasolacrimal drainage system is similar to mucosal-associated lymphoid tissue (MALT) in which lymphoma cells can infiltrate [2,3]. There have been few cases of lymphoma infiltrating and blocking the nasolacrimal system and often in these cases the patient is known to have previously diagnosed lymphoma elsewhere. In one study 10 out of 11 patients who had a positive lacrimal biopsy for lymphoma or leukaemia had a previous history of lymphoma or leukaemia [2].

Diagnosing tumours originating in the nasolacrimal system is often delayed due to the rarity of the condition and because it is often first misdiagnosed as dacryocystitis. The patient in this case was first diagnosed with dacryocystitis but due to the progressively increasing size of the swelling over the lacrimal sac and the pre-auricular lymph node and other atypical features discussed below, an alternative diagnosis was considered.

“Diagnosing tumours originating in the nasolacrimal system is often delayed due to the rarity of the condition and because it is often first misdiagnosed as dacryocystitis.”

The swelling associated with dacryocystitis is usually soft and fluctuant and with pressure or drainage expresses purulent discharge. The swelling in this case showed signs of inflammation and tenderness which indicates an infectious / inflammatory pathology. A major clue which triggered further investigation in this case was that on attempted aspiration of the swelling nothing could be aspirated and the lesion was noted to be firm. Tumours of the lacrimal sac grow progressively and are usually firm on palpation. Transillumination of the lacrimal sac lesion can also sometimes help to give an indication of its contents although this was not done in this case. Ultrasound assessment of the lesion would also be useful in order to identify if the structure is cystic or more homogenous in nature.

Another indicator of more worrying pathology in this patient was the nature of the lymphadenopathy. Lymph node enlargement is recognised as a common sign of infections. In this case, however, the progressive enlargement of the pre-auricular lymph node, which became more firm and fixed, was another clue for further investigation.

Although not demonstrated in this case, the index of suspicion would be further raised if the mass extended superior to the medial canthal tendon, if tears became blood stained [4] or if there was spontaneous bleeding from the punctum [5]. Although these features were not present in this case the atypical features discussed above were enough to warrant further investigation. Another important examination technique in assessment of lacrimal lesions and epiphora is a nasal speculum examination which, if done on first presentation in this case, would have likely revealed a nasal mass and warranted further investigation.

Lacrimal sac swelling caused by non-Hodgkin’s lymphoma infiltration is rare, more so in a patient with no previous history of the disease. There are usually significant delays in diagnosing lacrimal sac tumours due to the rarity of the condition and the overlap with the presentation of infectious dacryocystitis. This case, however, illustrates that following a thorough history and examination there are often enough clues to indicate that a more worrying pathology may be the cause.