A 40-year-old Caucasian male presented with a four-day history of redness and progressive painless reduction of vision in the left eye. His visual acuities were 6/4 in the right and 6/36 in the left. The left eye showed circumciliary injection with 2+ of cells and 1+ flare in the anterior chamber. There was low-grade vitreous activity. He developed mutton fat keratic precipitates later but did not have any hypopyon. 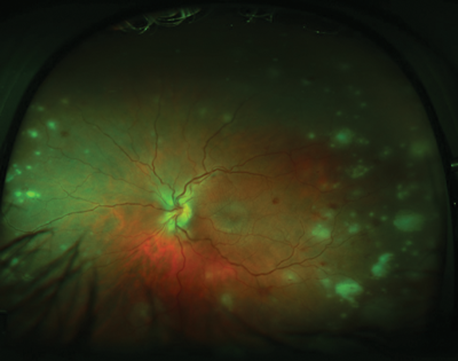 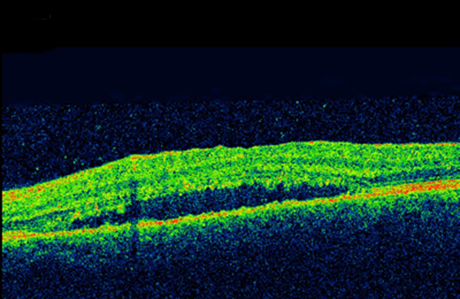 Further dilated ophthalmoscopy examination of the retina revealed hyperaemic, swollen disc and multiple discreet yellow placoid patches of necrotising retinitis on the retinal periphery. On the temporal side, a few lesions extended within the vascular arcades. There were a few retinal haemorrhages, and patches of arteriolitis in the periphery (Figure 1). The right eye was quiet. Macular optical coherence tomography (OCT) demonstrated sensory macular detachment without any cystoid macular oedema (Figure 2). The fundus fluorescein angiography illustrated early hypofluorescence with delayed hyperfluorescence. There was no focal or diffuse leak in the macular area. He was otherwise fit and well. 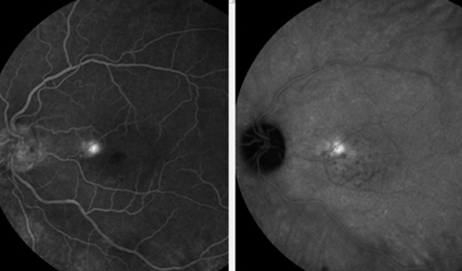 A working diagnosis of acute retinal necrosis (ARN) was made. The natural history of ARN is circumferential progression and development of retinal detachment with a guarded prognosis and as such, he was urgently commenced on intravenous acyclovir for two weeks. After the initial 48 hours of IV antiviral treatment oral prednisolone was also started. After this period, the IV acyclovir was switched to oral valacylovir. He also had prophylactic barrage Argon laser retinopexy to the retinal lesion. Nevertheless, despite clinical improvement of the peripheral lesions, the sensory macular detachment persisted and deteriorated. At this stage, additional fundus fluorescein angiography (FFA) and indocyanine green (ICG) angiography studies revealed a focal leak (hot spot) reminiscent of an inkblot appearance due to central serous retinopathy (Figure 3). Therefore, oral steroid was weaned off. Consequently, the subretinal fluid (SRF) was reduced and after six weeks, his vision improved to 6/6.

The diagnosis of ARN was made based on clinical triad of marked anterior and posterior inflammatory reaction, multifocal retinitis and periarteritis [1], but presence of some atypical features such as multi-focal lesions, posterior pole involvement and serous macular detachment (SMD) did cause a diagnostic dilemma and expanded the differentials to include acute posterior multifocal placoid pigment epitheliopathy (APMPPE) where SMD is a well recognised feature [2]. SMD is commonly seen in variety of inflammatory conditions such as Vogt-Koyanagi-Harada (VKH), posterior scleritis and non-inflammatory central serous retinopathy (CSR). Macular pucker and cystoid macular oedema (CMO) are known to occur in ARN [3], but SMD has not been reported before.

We hypothesise that early in the course of the disease, subretinal fluid accumulation might have been due to inflammatory injury to the retinal pigment epithelium (RPE) and breakdown of RPE pump. However, persistence and worsening of SRF despite complete resolution of all other inflammatory parameters was then thought to have been exacerbated by systemic corticosteroids. Angiography of the macula was unremarkable at presentation but showed ‘ink blot’ appearance of focal leak later after resolution of the retinitis. Rapid tapering of corticosteroids led to complete resolution of subretinal fluid with improvement in visual acuity to 6/6. Two possible mechanisms for corticosteroid associated CSR are increased in intracellular cAMP resulting in RPE pump dysfunction or by altering the permeability of the blood aqueous barrier and disrupting the outer blood retinal barrier [4]. There is a possibility that concurrence of SMD and retinitis was coincidental but we would have expected to see focal leak in FFA at the presentation. In addition, we did not identify any trigger factors such as prior use of steroids, hypertension, type A personality and sleep apnoea in this patient.

Classic ARN involves retinal periphery, one subset of ARN known as multifocal posterior necrotising retinitis has 50% macular involvement at presentation [5]. In this regard, our case showed a mixed picture of both retinal periphery and posterior pole involvement.
ARN with posterior pole involvement is usually associated with poorer visual prognosis due to involvement of macula from the outset and due to higher incidence of retinal detachment as compared to peripheral involvement. Our patient did well because retinitis did not directly involve fovea and perhaps because we were able to apply timely barrier laser.

This case report describes some atypical features of acute retinal necrosis due to varicella zoster infection. Additionally, it highlights that in retinal disease management corticosteroid use may be complicated by development of CSR as co-morbidity, usually responding well to rapid discontinuation of corticosteroids when feasible.

This work was presented at Yorkshire Retina Society meeting 2014, Leeds. 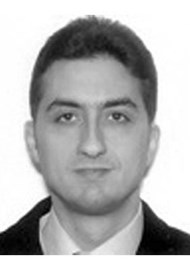