One of the side-effects of the coronavirus pandemic is that suddenly everything is now done on Zoom. In case anyone is fortunate enough to have no idea what this is, Zoom is an app that allows virtual meetings to take place between multiple participants all over the world. There is much talk about how brilliant Zoom is, how we need never go to a real meeting again, how when all this is over Zoom will rise triumphant from the ashes of global viral hysteria and will then be the way things are done for decades to come.

It is undoubtedly true that 90% of any meeting is a waste of time. Meetings are meant to be held to make decisions but there is so much diplomatic fluff surrounding these decisions that the process drags on, people make totally irrelevant speeches about peripheral issues and sometimes the all-important reason for the meeting is never actually addressed at all. Instead of discussing the future provision of some treatment in line with new guidance, we have 30 minutes of Mr X going on about how this treatment was never needed in the 60s, Mr Y making jokes about a senior politician and three or four others talking about a problematic trainee. Or a new brand of biscuits. Sometimes no decision is ever reached about anything, even about when to have another meeting to revisit the problem. So when ‘proper’ meetings became impossible suddenly there was a chink of light through the darkness that this virtual meeting thing Zoom would focus everyone’s attention and suddenly solve the meeting problem forever. 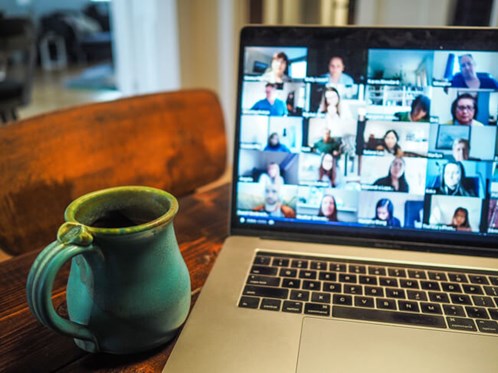 I doubt it will. I have had many Zoom meetings now and there are recurring themes. Firstly, it’s rare that everyone present understands the technology and can get things working in a reasonable time. How fun it is when 50 or so people are trying to listen to a speaker and there are various interjecting sounds from some of the participants who don’t know how to mute their microphones. Sometimes it is an ear-piercing beep as an email arrives, sometimes the sound of dogs barking or children arguing and, very occasionally, a brewing domestic argument in the background tantalisingly high enough in volume to make out the odd word. Then the host will plead with people to turn their microphones off, some participants will advise the host that they can do it remotely and the host becomes flummoxed in a cycle of sadness over how to mute people. Even the Welsh Health Minister got into hot water over the mute function by being loudly overheard swearing about a Labour Party colleague in the belief that nobody was listening.

Then there is the video function. Some speakers will elect to switch their video off and you can never be sure that they’re there at all. Perhaps they’re making tea, kissing their co-worker or recording everything for The Daily Mail. The black screen participant gives me the heebie jeebies. Then there are those who carefully choose their backgrounds. Having just done a Training the Trainers Zoom meeting, I noticed that some participants chose a fine backdrop of symmetrical stately bookcases, some chose a study setting with an anglepoise lamp or a nice view next to a window, while one participant chose to sit in front of a cabinet displaying a few cups and trophies. Those holding phones can be a bit of a problem as the shaking view of a stable face can make that square look a bit like The Surprising Adventures of Sir Digby Chicken Caesar. Best of all are those who choose their background from a list of photos to make them appear to be on the Great Wall of China, in the Alps, or even in space and are calmly talking to people about the number of free COVID-19 beds. If I was in any of those places I would not be talking about COVID-19 bed occupancy.

Network glitches come next. In real life you don’t get people freezing mid-sentence, sometimes multiple times in the same sentence, and who periodically make electronic buzzing noises as they talk. “Oh dear, we seem to have lost so-and-so.” That could be the tagline for Zoom. But worry not, that person usually comes back as loud and as electronically buzzing as ever, usually in the middle of someone else saying something. These virtual meetings do indeed cut down on unnecessary discussion, mainly by cutting down on all discussion. It is possible to make it easier with large crowds by putting participants into smaller groups for a short while. Usually in these real-life small groups people introduce themselves, discuss things using verbal and non-verbal cues and some form of human interaction takes place. On Zoom the time is spent teaching the person in the bottom right who is obviously unfamiliar with things that if they want to talk they must unmute the microphone while at the same time that same person mimes on endlessly in a manner that is not entirely convincing that they have heard you either.

Virtual participants in a meeting that is also taking place in real life can feel excluded. Mainly as they can’t seem to hear anything and when they do talk only about half of what they say is audible and the real life participants are too polite to point that out to them, so they end up saying something neutral like “that’s an, ahem, interesting contribution there” and the charade continues. You have to be careful with names too. These are the names that appear in your box on our modern-day version of Celebrity Squares. Most names are the actual names of the participants, some will have ‘JOJones iPhone’ or something similar but one or two might have something truly unexpected such as ‘bulbasaur’ or ‘honeybunch.’ I’m not sure of the mechanism that causes this to happen, but it is amusing to see a venerable pillar of the medical establishment contribute to a meeting in a box alongside the words ‘LoveDOC’.

There are some benefits. In real meetings it is impossible to openly play solitaire in front of everyone, to read a book or drink tea. In the world of Zoom the laptop can be arranged in such a way that your novel can be hidden just underneath the screen and your partner can bring you food and drink to your heart’s content. If out of the blue you’re caught unawares and someone has asked you a question you hadn’t grasped as you were trying at the time to work out how to get out of a situation where you’re running out of moves whilst desperately trying to protect your 48 win streak in solitaire, you can just say “sorry you’re breaking up there what did you say?”

Personally, I don’t think these benefits are worth it. It’s nice to have reasons to make meetings, teaching encounters and courses more focused and relevant, but I cannot see virtual encounters replacing the real thing. Most communication is body language. I like the older generation of ophthalmologists rocking up late to teaching, giving a few pearls of wisdom, making a few passive aggressive comments about a presentation then peeling off with another colleague to discuss something in private. I like the interaction. Being social. I don’t think I will ever be at home in the same way with a bunch of people in squares struggling to understand each other with audio and background distractions that melt away the sense of unity a real gathering brings. But if Zoom is the future I will have to invest in some home improvements in order not to feel embarrassed, or else do my own meeting from Mount Everest again.

The views expressed are those of the author and do not represent those of the editorial team or the publisher.