Great Britain Hockey player Sam Ward, described as one of the “deadliest attackers in world hockey” [1], sustained a sight-threatening injury after being struck in the face by a ball during the Olympic qualifying match against Malaysia this November [2]. Despite helping to secure an Olympic qualification, there is concern that this match might be his last time playing at international level. Sam has undergone surgery to fix his facial fractures, however, the damage to his retina has resulted in partial irreparable slight loss in his left eye. However, the forward player appears to be making good progress and is hopeful that his “brain will be able to adjust.” He is remaining positive about the thought of playing in Tokyo Olympics 2020 [3].

Outrage broke out across Japan following the introduction of a ban on women wearing glasses in certain workplaces this November [4]. From the beauty industry to the airline sector, reasons for the spectacle ban included glasses obscuring the customer’s view of the female’s make-up for those working at a make-up counter or even glasses being deemed as a safety risk for airline workers [5]. Some women in Japan are fighting for their right to wear glasses at work and have protested by tweeting images of their glasses. Control over body image by the authorities is an ongoing battle for Japanese women following a recent petition to bring an end to the heels-at-work rule.

The first female Olympic champion, Nicola Adams, has had to hang up her gloves following fear of losing her sight [6]. The 37-year-old announced this December that continuing her boxing career will have serious consequences on her vision. She was advised that ongoing blows to her eye may ultimately result in irreversible damage and permanent loss of vision [7]. Nicola Adams has had a very successful career including winning two Olympic gold medals as well as the WBO championship belt. Unfortunately, the impact of this extreme sport has taken its toll and Nicola has accepted it is time to retire from the ring in order to protect her vision.

The impact technology has on a child’s development is an ongoing debate. Recently there has been a concern over the relationship between screen use and children’s eye health [8,9]. Dr Alice Lin, a Paediatric Ophthalmologist from America, has noted a rise in dry eye disease in children, which is usually a condition that affects adults and is associated with office screen work [9,10]. Interestingly, Dr Lin is seeing more children with dry eye symptoms and states it is likely related to the increased screen time, and therefore reduced blink rate, sustained by children. She advises reducing screen use time, as well as being aware of distance between the child and the screen. She also recommends “old-fashioned sunlight” and staring into distances as ways to allow children’s eyes to rest.

Claire Willis, a mother of two, suffered a nasty surprise whilst holidaying in Turkey [11]. Following a shower, she went to dry her face with a towel and heard a “popping noise”. The last thing one would expect following patting your face dry would be to perforate your own cornea! Unfortunately, this was the case for Claire and within hours she made her way back to the UK for urgent ophthalmic review. Initially the doctors had tried to save her eye, but unfortunately it became apparent that the only option for Claire was evisceration of her eye. Happily, she is adjusting to living with only one functioning eye and has managed to return to work. An ophthalmologist from the hospital where she was treated said: “This lady had particular circumstances that led to a thinner than normal cornea in her case.”

Kezia, a 23-year-old Londoner, has been struggling with her vision due to neuromyelitis optica. She is sadly still battling for access to specialist funding [12]. Due to her diagnosis, she knew that applying for jobs would not be straightforward and that she would need specialist support in order to be trained for a job she could undertake with poor vision. She applied to The Royal National College for the Blind (RNCB) which supports people with visual impairment to gain skills for work. However, her local authority had refused the funding she requires. She was advised to explore other options, such as taking an apprenticeship or attending a local college. It appears that certain local authorities are unable to fund students for places, and this is likely due to the limitation of their special needs budget. In turn, this has impacted the RNCB, which relies on the local funding system. The RNCB has now taken up Kezia’s case, however, the future of the College is “in the hands of those who govern it and the local authorities that require student places.”

Who says running is healthy? An oregan woman was running in the Carme Valley area in California when she encountered a swarm of flies. Not an uncommon occurrence, as I can attest to the occasional insect meeting an untimely death in my inferior fornicies whilst out for a run. This lady, however, felt irritation in her eyes a month later, and when she flushed her eye out with tap water found a roundworm that fell out of her eye. Upon closer inspection, she discovered there were more worms in her eye. The worms were sent to the Centres for Disease Control and prevention, who determined this was Thelazia gulosa, a species of roundworm which usually infects cattle [13]. Maybe some eye protection needed for my next jog! 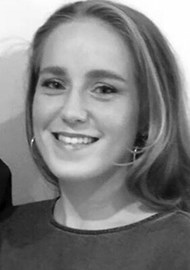