Orbis announces new research demonstrating that correctable vision problems among commercial bus drivers are a significant contributor to the high rate of road crash fatalities in Bangladesh. The study is published in a special issue of the Asia Pacific Journal of Ophthalmology on the prevalence and impact of near- and farsightedness in the Asia Pacific and globally.

“Many of us rely on public transportation to go about our daily lives, but there are very few studies that provide data on vision and traffic safety among the sector’s drivers,” said Munir Ahmed, Country Director for Orbis Bangladesh. "While our study showed high rates of unaddressed visual impairment among bus drivers, in the vast majority of cases, it could be easily and inexpensively corrected. This has significant implications for reducing traffic fatalities not only in Bangladesh, but also in other low- and middle-income countries, where 93% of road traffic deaths occur.”

Findings of the Study

The road crash fatality rate per capita in Bangladesh is three times higher than that of the South Asia region, with bus crashes being a notable contributor to that trend. In a recent three-year period, approximately 50% of fatal crashes in the Dhaka metro area involved buses, compared to less than 1% in the US and the UK.

The clarity of one’s vision is a key parameter commonly measured when applying for a driver's license, but studies suggest that uncorrected vision problems are common among commercial drivers in low- and middle-income countries. Orbis set out to determine how common such vision problems were among bus drivers in Bangladesh and whether their presence was associated with a history of motor vehicle crashes reported by drivers. 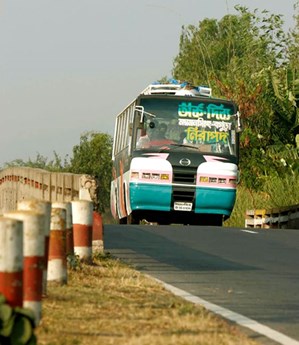 Nearly 1 in 5 drivers did not meet the standard of clarity for distance vision that is required to obtain a commercial driver's license in Bangladesh.

To do so, Orbis Bangladesh worked together with local partner the Grameen GC Eye Hospital to carry out free eye health screenings at 10 bus terminals in seven districts across Bangladesh during a three-month period in 2019.

A majority of bus drivers screened were found to be near- or farsighted. Additionally, nearly 1 in 5 bus drivers did not meet the standard of clarity for distance vision that is required to obtain a commercial driver's license in Bangladesh; nearly 90% of these cases could be improved with readily available treatments, such as glasses.

These findings underscore important recommendations for policymakers, including ensuring that specific vision standards are not only set for licensure, but also enforced by rigorous testing of all applicants, particularly those responsible for the safety of numerous other road users. Additionally, given the very high proportion of drivers with vision impairment due to readily treatable causes, referral for affordable and accessible care must be made for all those failing screening.

Given these implications, road traffic safety improvement is highlighted in targets within two of the United Nations Sustainable Development Goals (SDGs). One calls to halve the number of global deaths and injuries from road traffic crashes by 2030, while the other calls for improved road safety by expanding public transport, with special attention to the needs of vulnerable users, including women, children, persons with disabilities and the elderly.

Orbis’s study shows an important link between improved access to vision screening and quality eye care and the ability to improve road traffic safety concerns in the areas most affected by them and to meet the SDGs. Besides benefits at the individual level from a reduced burden of road traffic crashes, a reduction in crashes in low- and middle-income countries has also been shown to be associated with increases in gross domestic product.