Results of a trial published in Lancet Global Health on 14/10/21 could pave the way for significant improvements in treatment for glaucoma in Sub-Saharan Africa.

The eye condition glaucoma is the second leading cause of blindness in adults worldwide. Rates in Sub-Saharan Africa are the highest for any world region and are predicted to nearly double by 2040. The study, conducted through a research partnership between Kilimanjaro Christian Medical Centre (KCMC) in Moshi, northern Tanzania and the International Centre for Eye Health (ICEH), funded by international disability charity CBM and Seeing is Believing, shows that laser treatment could be significantly more effective than eye drops in managing glaucoma, and can be affordable in low-income settings.

This study is the first randomised controlled trial into the use of the laser treatment Selective Laser Trabeculoplasty (SLT) for patients with advanced glaucoma in Sub-Saharan Africa. It found that SLT, already widely used in high-income countries, successfully reduced eye pressure for significantly more patients in Tanzania in comparison to the standard treatment of timolol eye drops.

Glaucoma is usually caused by fluid building up in the eye, which increases intra-ocular pressure. Prompt and effective treatment is vital to prevent damage to the optic nerve and irreversible sight-loss. The treatment trial, based at KCMC, looked at effectiveness of SLT compared to timolol eye drops, currently the main treatment option in Sub-Saharan Africa. 201 people with moderate or advanced glaucoma were enrolled; half were treated with eye drops (timolol) and half with SLT. For those treated with eye drops, treatment was successful in 31% of eyes after one year. For those with SLT, this rose to 61%.

The trial was led by Dr Heiko Philippin, an ophthalmologist who was based at 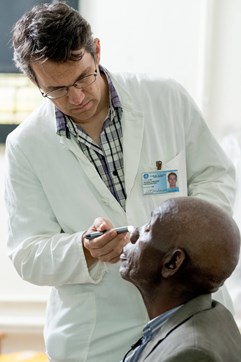 “Glaucoma requires life-long treatment and follow up to save a person’s sight, but this is very challenging in many settings. Currently, most people are treated with eye drops but many struggle with taking them regularly or accessing new bottles, for example due to cost or distance to the nearest clinic. These study results are exciting because they show that we can treat glaucoma more successfully with a one-off or occasionally repeated outpatient laser treatment to reduce eye pressure at least for one year, compared to the most commonly used eye drops in lower income regions. We are grateful to all participants and our colleagues for their commitment and hope that these findings will improve glaucoma care for many people at risk of becoming blind.”

The study also considered the affordability of SLT, finding that in spite of the initial cost of the laser equipment, at hospitals dealing with high volumes of glaucoma patients the treatment could be offered as inexpensively as for an annual supply of eye drops. Recognising that costs of maintaining and repairing equipment can be significant, the authors point out that the SLT laser used at KCMC has not required maintenance or repair in its four years of use.

Dr William Makupa, Head of Ophthalmology at Kilimanjaro Christian Medical Centre, says: “In our setting glaucoma is diagnosed late, and some of the patients after some time decide to ignore or just stop using eye drops. If we can establish an alternative effective means of arresting the disease, we would bring about a positive impact on the quality of life of these patients.”