A recent study by Contact Lenses UK has revealed that women have better colour vision than men. 13% of women scored the highest colour vision, compared to 10% of men. Over 2000 UK-based customers participated in the research, which delved into how age, eye colour and gender can impact eye health nationwide. Men took the lead when it comes to depth perception, with 11% scoring the highest possible score compared to 10% of women. 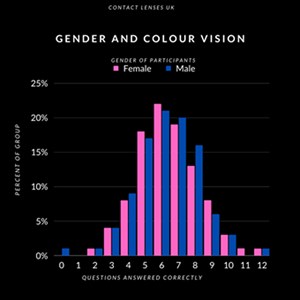 A common misconception states that age can play a part in the deterioration of eyesight and vision. Members of the older generations notbaly performed better in depth perception reserach carried out, game with 33% of 70-79-year-olds finding 80% of the items involved in the research test. In comparison, just 23% of 18-29-year-olds scored in the top 80%. This raises questions concerning Generation Z and Millenial's eye health.

In comparison, a younger group scored higher in the colour vision test, but only by a small margin. Only 2% of 18-29-year-olds answered all questions correctly whereas 1% of the groups aged 30-69 scored full marks. No one in the 70-89 bracket scored full marks. The reasons for vision deterioration can vary, and it is not just age. Medication, screen time, incorrect prescriptions and diet can all impact eye health. 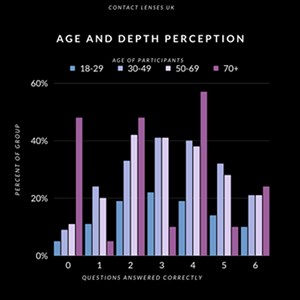 Sleep is crucial to replenish the eyes and function well throughout the day. In both tests, those who did not sleep did not perform as well as those who slept well, or only partially struggled sleeping. In the colour vision test, only 1% of those sleeping poorly found 11 images or more. 54% of the poor sleep group couldn’t find more than six, well over half of the group compared to just 33% of those who slept well.

Lack of sleep doesn’t just affect colour vision, but also depth perception. Only 9% of the poor sleep group spotted all six items. Significantly, both the poor and good sleep groups had the same percentage of those who could not find any image (4%). 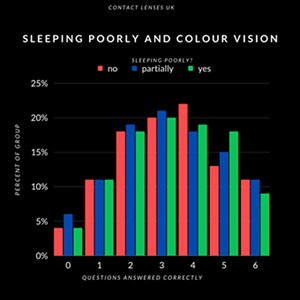 While most people would not expect eye colour to have any influence, there does seem to be a winner in each test. In the colour vision eye test, hazel eyes performed the best, whereas in the depth perception test grey eyes scored highest, although it was very close in both tests.

In the depth perception test, 13% of grey participants found all six items, narrowly beating 12% of brown-eyed participants but still coming up top. 32% found five or more items, 5% more than brown, which was in second place, with 27% finding five or more items. Green eyes scored the worst in the test overall, with 18% of participants finding one or less items, although 1% more of hazel eyes couldn’t find any items at all. 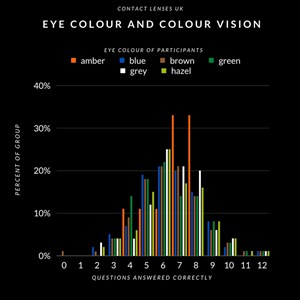 Founded in 1996, Contact Lenses UK is an online contact lens retailers. With a loyal following in the UK, the operation aims to carry out further research into eyesight in aid of its customer base.