Royal College of Ophthalmologists Annual Congress 2019, Glasgow - First presented and discussed on Monday 20 May 2019, with a further presentation of results during Retina Subspecialty Day on Thursday 23 May 2019.

The primary endpoint was change in best corrected visual acuity (BCVA) Early Treatment Diabetic Retinopathy Study (ETDRS) letter score from baseline to 100 weeks in the study eye of all patients.

Study design and clinical outcomes were described as robust. A linear mixed effects model was used for statistical analysis and both the intention to treat (ITT, all randomised) and per protocol (PP, eligible and sufficiently treated) populations needed to show non-inferiority (no worse) for this to be concluded. The predefined non-inferiority margin was -5 letters.

Study follow-up through the duration of the study in both the ITT and PP populations was good: 87.9% in the ITT analysis and 86.4% in the PP analysis completed the 100-week visit.

For the management of macular oedema due to CRVO, ranibizumab, aflibercept and bevacizumab provided substantial and sustained improvement in visual acuity throughout the study, said Mr Hykin.

At least 8-weekly follow-up and prompt treatment in the second year maintained first year visual acuity gains and significantly fewer injections were required with aflibercept compared with ranibizumab and bevacizumab through 100 weeks. No new safety concerns were identified and the number of adverse events was generally low across study arms. There was one case of endophthalmitis in the bevacizumab group.

For routine treatment of macular oedema due to CRVO, clinical effectiveness data from the LEAVO study do not support bevacizumab as being interchangeable with aflibercept and ranibizumab for this indication, concluded Mr Hykin.

Six monthly loading injections from baseline are required to provide maximal early improvement in visual acuity and at least bimonthly monitoring and timely injections are subsequently required to sustain the early visual gains.

Extension of treatment intervals beyond 8 weeks is likely to lead to loss of vision, cautioned Prof. Sivaprasad.

Table 1. Outcomes from the LEAVO study* 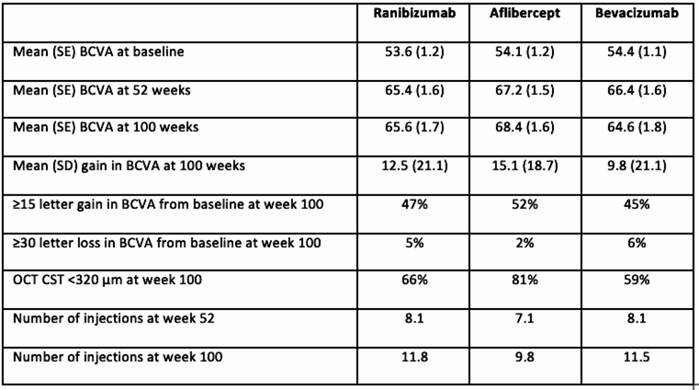