Ophthalmologists, nurses, and eye health workers in Ethiopia defied the odds to treat millions with trachoma-fighting antibiotics and surgeries - despite cuts to UK Aid assistance threatening eye care. This World Neglected Tropical Diseases Day Orbis, the international eye care charity, are celebrating the achievements of its medical teams who have been working in Ethiopia for 23 years.

More than 12 million people have now been treated with the antibiotic Azithromycin across 102 districts in Ethiopia’s Southern Nations, Nationalities, and People’s Region (SNNPR) and the new Southwest Region, where the burden of trachoma remains particularly high.

Over 1.7 billion people live with Neglected Tropical Diseases, which includes trachoma – the world’s leading cause of infectious. Globally, an estimated 1.9 million people are blind or have vision impairment due to trachoma and women are most at risk of developing trachomatous trichiasis - the most advanced and painful stage of the disease.

Repeat and untreated trachoma infections can lead to trichiasis and 70% of those living with trichiasis are women. It can be addressed with surgery but faced with the difficult decision of which gender to treat in families, it is often women and girls – who are less likely to be working– who are left waiting for medical care.

Trachoma infection is easily treatable with antibiotics. The COVID-19 restrictions meant the Orbis Ethiopia team of medics and healthcare workers had to treat people face to face, doubling the length of time to treat the numbers needed to stop the spread. But despite this, in December alone, 9 million doses reached communities. And 16,000 surgeries were performed for trichiasis in 2021.

The achievements come a year after, the World Health Organization announced its plans to eliminate trachoma by 2030.

“This World Neglected Tropical Diseases Day, Orbis is proud to join the WHO and more than 300 other organizations coming together to combat Neglected Tropical Diseases. We know this work is integral to the achievement of Sustainable Development Goal 3 around good health and well-being. Our team has remained committed to continuing to distribute sight-saving antibiotics, even as we’ve faced hurdles – from the pandemic to recent events in Ethiopia – because we know how restoring vision changes lives and communities.”

Prime Minister Boris Johnson, in a video to mark Neglected Tropical Diseases Day in 2021, announced his full support for the World Health Organization’s plans to eliminate trachoma by 2030. The Prime Minister stated there is nothing inevitable about the avoidable suffering of millions affected by Neglected Tropical Diseases. But the recent cuts to UK aid assistance will leave millions at risk of avoidable blindness and a rapid return or trachoma in Ethiopia and much of Sub-Saharan Africa where 35% of the global burden of disease resides.

“If the UK Government is serious about eliminating Neglected Tropical Diseases including trachoma, communities cannot wait for treatment. Beating trachoma is a race against time and cuts to aid threaten the efficacy of years of hard work. These interventions can radically change lives. Without them livelihoods are lost, children miss school and families and communities’ risk being plunged into further poverty and isolation. While we recognise it’s a challenging time for the UK Government and that budgets need to be carefully considered, we also know that 90% of the world’s vision loss is avoidable with simple, cost-effective surgeries and treatment. The UK Government has historically been an important contributor to aid assistance, and we urge them to make provisions for sight-saving eye health in their forthcoming International Development Strategy.”

“My name is Yishamu. I am one of the first Health Extension Workers trained through the Ministry of Health ten years ago. The main role we have as a Health Extension Worker is to help women and children improve their health and hygiene. We visit each and every member of our community as assigned to teach them about various health issues, including eye health care. We mostly focus on prevention. We have also had various additional training organized by Orbis on personal hygiene, trachoma identification, and referral systems. 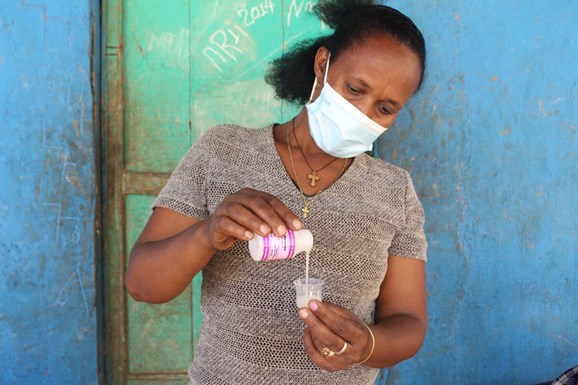 Yishamu was one of the first Health Extension Workers trained through the Ministry of Health ten years ago.
She has been a part of the Mass Drug Administrations for the past five years. Image: Orbis.

My team and I have been trained and tested to qualify us to handle this Mass Drug Administration this year. I have been part of Zithromax distribution campaigns for the past five years. However, the last two rounds of MDA have been different due to the pandemic. For this, going home-to-home carrying our population registration books as well as enough Zithromax drugs for the day has been challenging as it is takes time and is tiresome.

Even though we are here to distribute the drug, we also use this opportunity to assess the eye health of our community. When we come across someone who has trachoma, we immediately send them to the nearest health center for better eye health service. We are also teaching our community how to protect themselves from COVID-19.

We have enough PPE for our team, thanks to Orbis. Before continuing to the next household, we always stop to clean our materials as well as our hands. We do this consistently to avoid spreading the virus or infection.

Despite the challenges, we are very happy to be able to contribute to the improved health of my community. We are working on prevention, which is satisfying itself.”

Silele, 50, is a mother of eight children. Her husband is a farmer. They also help raise some of their grandchildren at their house. She came out of her house to take the yearly azithromycin drug distribution. She took the drug without hesitation. Before she took the drug, the team explained why they were standing outside her house. When she realized that the drug was for her eyes, she said that her eyes were badly hurting. The team examined her eyes and diagnosed her with trachomatous trichiasis, which can only be treated through surgery. 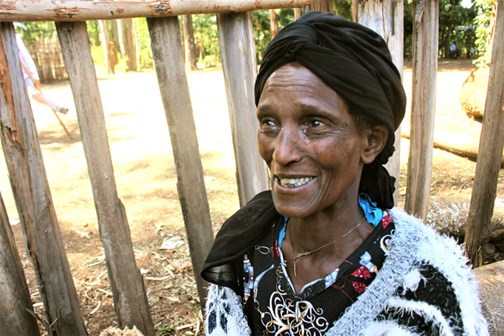 She said: “My eye is causing me so much pain. I cannot remember when exactly it started. I have had several eyelashes epilated to get some relief. It was both eyes when it started. Six years ago, I went to the health center and got surgery for the left eye. I was supposed to be back at the health center to get the other eye operated on. But I could not go back because I am usually alone as all of my children are away.”

When she cannot bear the pain in her right eye, Silele goes to a traditional healer to get lashes epilated. This gives her temporary relief. Thanks to the team going home-to-home, they were able to learn about Silele’s condition. One of the distribution team members, who is also a Health Extension Worker, sat with her to explain the need to get her eyes operated on for permanent relief. The Health Extension Worker told Silele that she would take her to the health center herself.

To find out more, visit: