Liverpool is steeped in history, from its mercantile history, home to Cunard and the White Star line, to the Merseybeat and Derek Hatton. Not to be outdone at their annual meeting in the city, the Royal College of Ophthalmologists made history with their first day dedicated to emergency eye care. The Emergency Day was the brainchild of the British Emergency Eye Care Society, an ophthalmology led multidisciplinary group. So what is emergency eye care? A useful definition is “any eye condition that is of recent onset and is distressing or is believed by the patient, carer or referring health professional to present an imminent threat to vision or general health” [1].

Billed as a multidisciplinary day, I think I was the only practising optometrist, perhaps the only non-doctor. Brilliantly led and co-chaired by Seema Verma (Moorfields, the first Ophthalmic A&E Consultant) and Stella Hornby (Oxford Eye Hospital) the day was pretty much entirely clinical and apolitical. Placed forefront was the patient, with the first presentations detailing the problems arising from the demographic change and patient expectations.

The potential perception of inaccessibility due to ever increasing specialisation and subspecialisation of medicine and ophthalmology was also highlighted. There has been a struggle within the RCOphth to give emergency eye care a higher profile – a job just for juniors, with only the occasional ‘stop the clocks’ true emergency – no longer.

As well as community optometry, primary eye care also encompasses ophthalmic A&E, whether that is 24-7 (Moorfields and bigger units), 9-5 (with on-call ophthalmology accessed via A&E out of hours) or nurse-led walk in centres and even phone triage. It seems a working definition is: access without referral. We truly are all in it together. Both early speakers (Seema and Stella) were keen to espouse the role of the Independent Prescribing (IP) optometrist. Their only regret being that when they got their Hospital Eye Service (HES) optometrists trained, they rapidly got purloined by glaucoma, medical retina or research. They felt that when IP placements are provided, the medical teams reap more benefit than cost.

The point was made that optometrists represent the only practical group existing in any real numbers not requiring huge investment in training. But even with an IP qualification, the consensus is that an optometrist probably needs 18 months of regular exposure to disease to become confident and semi-autonomous.

Detailing the scale of the problem, John Buchan (St James’s University Hospital, Leeds) presented the evidence behind the Royal College of Ophthalmologists Way Forward project [2]. Although there has been some input (covering glaucoma, cataract, and age-related macular degeneration (AMD)) from hospital optometry, this is absent from the Emergency document. Occurring only at commissioning council level in England, I do wonder if a unified approach, including community optometry, might yield more benefits.

It may not be what we optometrists want to hear, but there is a legitimate concern that we may be generating an increasing unmet need, as opposed to taking workload away from ophthalmic A&E. Clearly there is a cognitive dissonance if investment in Clinical Commissioning Group (CCG) funded community eye care schemes, e.g. Primary Eye Care Assessment & Referral Service / Minor Eye Condition Service (PEARS/MECS), does not produce an immediate visible drop in A&E attendance. Another concern was that although optometrists were seen as a capable and well trained resource (and yes they absolutely get the ridiculous fragmented General Ophthalmic Services (GOS) system in most of the UK which works against a better scope of practice), we may end up just being another step in the pathway. The subtext here is that optometrists must not see PEARS and MECS as an end game, but more of a stepping-stone towards a more integrated approach to eye care.

The Way Forward criticises the accessibility of optometrists providing PEARS/MECS in that practices are scarce in areas of significant deprivation. The concern is that, colloquially, PEARS may generate increased input from those in less deprived areas. To be honest, in comparison to centrally located hospitals, I would have thought that accessibility to optometry practices was wider than that of GPs; they are found in high streets and shopping centres. However, it is certainly possible that the less well-equipped optometrists may be closer to the deprived areas. This issue is not unique to optometry, as it affects community pharmacies and dentist’s practices. Unlike the other primary care contractors though, NHS subsidy is not available to community optometrists to support practices in these most deprived areas.

An interesting perspective on GP involvement was that GPs love PEARS/MECS so much they delegate its signposting to their receptionists. This means that once it is up and running they delegate everything eye related to optometry. Whilst this is great for the schemes and for the patients, in a tiered cost system it must be remembered that although we may be cheaper in unit cost than ophthalmology, we are certainly not cheaper than a seven minute (if you are lucky) GP exam.

John detailed the process of researching the project (200 telephone interviews with ophthalmologists across the UK). Part of the issue with increased numbers arose with the change in GP contract in 2004. This released GPs from a responsibility to maintain out of hours service with commensurate effect on patients, thus A&E became a preferred route for access. Ultimately we are in a world described by Professor Carrie McEwen as “a perfect storm of increased demand, caused by more eye disease in an ageing population requiring long-term care”.

I came away with a new understanding of the nuances to the constructive objections that optometry negotiating groups might meet when a Clinical Commissioning Group engages with local ophthalmology. An interesting quote in The Way Forward seemed to make sense to me: “It has to be better for our patients to see someone with a four-year training, and many years’ experience with the eye, who has a slit-lamp and possibly an OCT, rather than seeing a GP practice nurse or someone in A&E who may have only a few hours training in the eye.”

Much was made at the meeting of having access to senior clinical staff when the going gets tough. We optometrists must remember that even when working as IP in casualty, we are not trained on a medical model. Though rare, there are enough challenging conditions, ophthalmic and systemic, that can creep up and bite. In my opinion, this is not promoted enough in the IP courses. Did you know, for example, that TB and syphilis are more common than you might think? A quote that stuck in my mind was that there is more TB in Brent than in the whole of Malawi!

Current optometry guidance is NOT to initiate treatment if there is any doubt about diagnosis [3]. In reality there could always be doubt. Stephen Tuft (Moorfields) had an interesting perspective on initiating treatment in primary care. He felt that if treatment failed and ultimately required referral, he would still expect to attempt to culture, but the results might take longer. He did not give the impression that every keratitis lesion should be referred to secondary care for management. Ultimately, all of us in primary care must remember that the back-up and resources for complex anterior segment management (culture, microbiology, confocal imaging etc.) is merely a referral away. It is a common reflection in medicine that there is no such thing as a risk-free diagnosis.

The day finished with an extremely elegant presentation by another of the Moorfields A&E team, Badrul Hussain. During his presentation, he issued a warning relating to the trend towards telemedicine. He used the term ‘veterinary ophthalmology’ to describe ophthalmologists running virtual clinics looking at images only. A bit unfair on vets perhaps, but the point was well made, suggesting that other aspects of the history, appearance or demeanour of the patient might get missed.

I attended the meeting with Ben While, the newest Consultant Ophthalmologist at Hereford. Time does fly – I was welcomed to Hereford as a new optometrist by his father Adrian, with whom I worked on many primary care developments. Ben takes emergency eye care seriously and uses optometrists as part of the team. From a starting point of zero, Hereford Victoria Eye Unit now has four sessional optometrists providing support in outpatients and casualty. The hospital staff have been amazing; for a small unit to have provided placements for seven IP optometrists is a great achievement. The investment in training has been worthwhile. In the past three years Hereford has reversed the trend of growing ophthalmic A&E attendance and is now seeing a 5% year on year reduction.

Optometrists should look out for more meetings where the Royal College is engaging with primary care. It was an excellent opportunity to meet ophthalmology colleagues and I learnt huge amounts to support my own practice. I certainly believe that such shared learning will deliver significant value in the future. 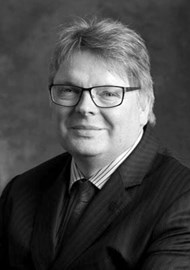