Diabetic macular oedema (DMO) is a common complication associated with diabetic retinopathy, and the most common cause of visual impairment in diabetes [1]. With predicted rising levels of diabetes (in England by 2025 the estimated population with diabetes will be five million) [2], the prevalence of visual loss from DMO is set to increase with increasing burden to healthcare services.

It is hoped that this increase will be somewhat curbed by improved detection of diabetes, better treatments for diabetic retinopathy and improved effectiveness of the National Diabetic Eye Screening Programme [3].

Sustained hyperglycaemia causes a multifactorial cascade of physiological processes, involving increased permeability, cytokine activation, altered blood flow, hypoxia (from vasoconstriction and capillary loss) and inflammation. Vascular endothelial growth factor-A (VEGF-A) is a major contributor to the inflammatory process and to angiogenesis and permeability [3,4]. It is the disruption of the inner and outer blood-retinal barrier that leads to the increased vascular permeability and the accumulation of fluid within the intra-retinal layers of the macula causing the macula oedema [1] (see Figure 1). 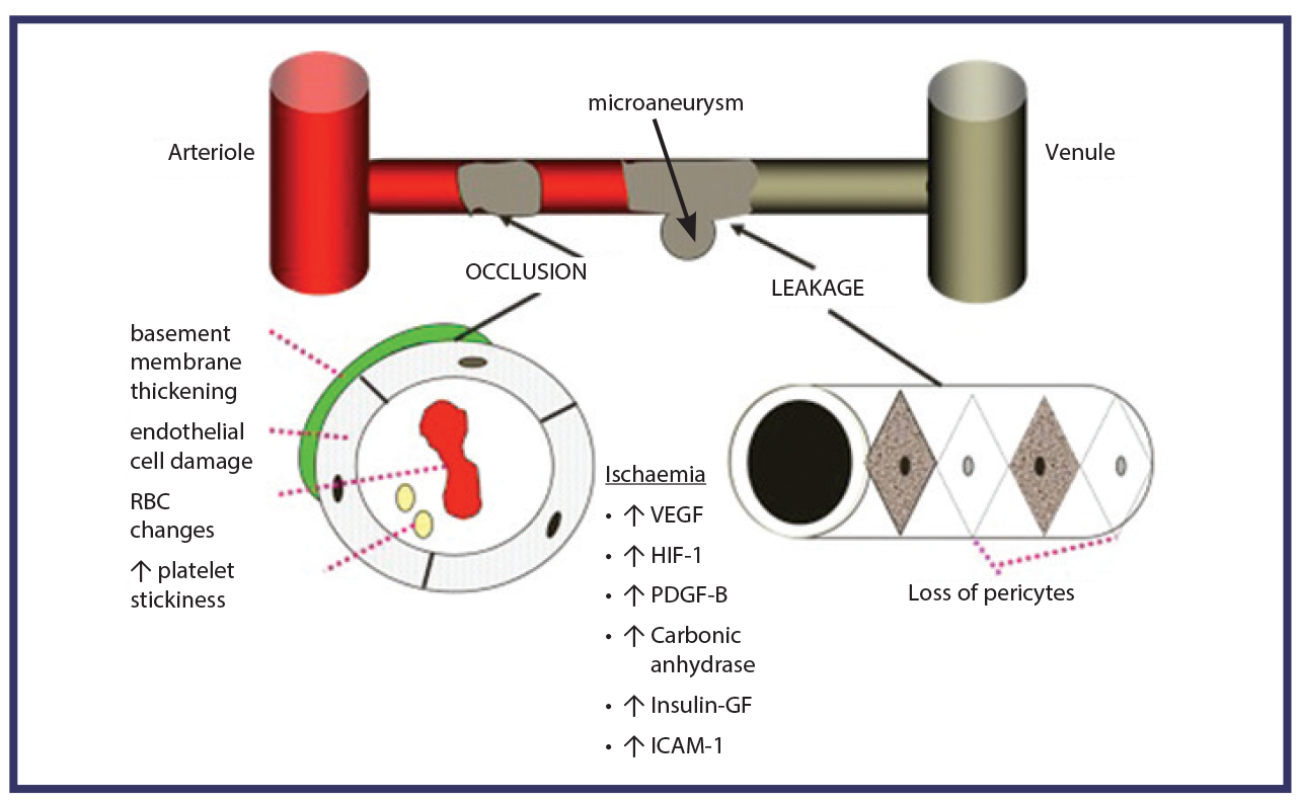 Figure 1: Diagrammatic representation of changes to vasculature in diabetic retinopathy and cytokines involved.

Clinically CSMO occurs where there is a threat to central vision and is defined as all or any of the following:

DMO can also be classified as either focal or diffuse. Focal DMO is characterised by well-defined, discrete areas of leakage from microaneurysms often seen clinically, in comparison to diffuse DMO, where the areas of leakage are more generalised caused by extensive capillary dilation and can be seen as diffuse leakage on fluorescein angiography [1].

The diagnosis and monitoring of DMO has been facilitated and modified by the advent of optical coherence tomography (OCT) scanning which allows the measurement of central retinal thickness (increasingly used to make treatment decisions), macular volume, retinal morphology and vitreo-retinal interface changes [7]. 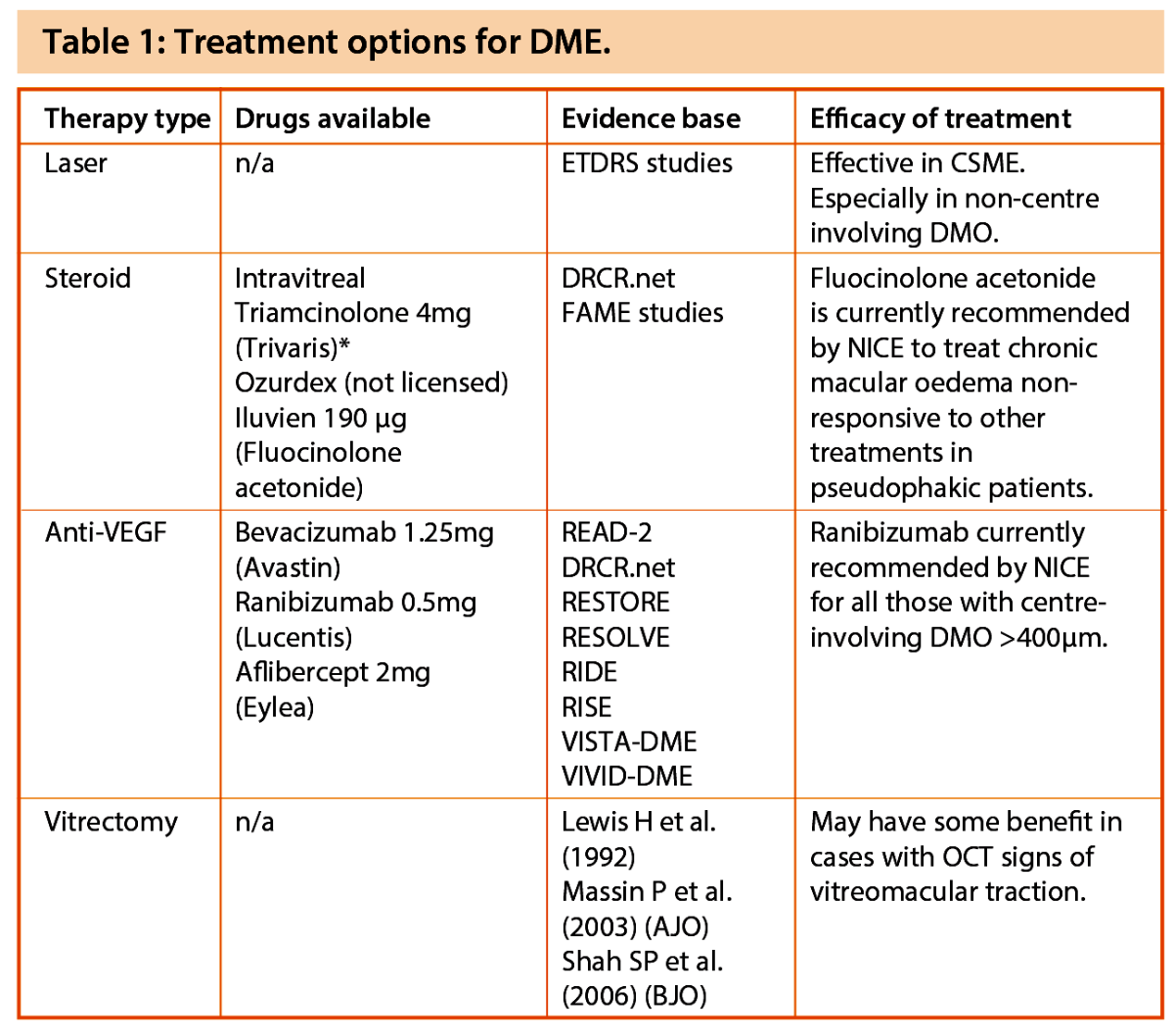 Since the EDTRS trials, a myriad of treatment options have become available for the treatment of DMO (see Table 1). It is now the clinicians’ responsibility to sift through these various trial data, to determine which treatment option or combination to use to get the best results for our patients. These treatment options can be broadly divided into the following:

The EDTRS report 2, sets out clear criteria for the treatment of focal leaks and diffuse oedema, recommending fluorescein angiography when treating diffuse areas [5]. Focal leaks should be treated with direct treatment when 500µm from the centre of the fovea when associated with thickening. Leaks between 300µm and 500µm should preferably not be treated at the first sitting or if the vision is better than 20/40 or if the edge of the perifoveal network is not intact. Any areas outside 2DD from the centre of the macula only need to be treated if the areas of thickening extend into the central area. The aim of treating focal leaks is to create closure and obliteration of the leaks to reduce the oedema long-term. Burns of 50-100µm spot size can be used with a duration of 0.05-0.1s to create a whitening or darkening of the microaneurysm and / or a whitening of the retinal pigment epithelium (RPE) beneath the microaneurysms. In the modified EDTRS protocol, a change of colour of the microaneurysm was considered less important but a mild greying must be present beneath [7]. The newer multi-spot lasers use lower burn durations of 10 to 20ms.

When treating areas of diffuse leakage, a ‘grid’ must be applied (1 burn width apart) to all areas of leakage and areas of capillary drop-out within 2DD from the centre of the macula (including the papillomacular area). The burn spot size can vary from 50-200µm and areas within 500µm of the centre of the macula are not recommended to be treated. Areas of flame or blot haemorrhage should also be avoided [5].

Treatment according to this regime could reduce the risk of moderate visual loss from 24% to 12% over three years [5]. The benefits of focal / grid laser were also confirmed in a three year DRCR.net study comparing laser treatment to 1 and 4mg intravitreal triamcinolone. Although initially after four months it was felt that the steroid group were doing better, this benefit subsequently diminished and the laser group achieved a better mean visual acuity at both two and three years. This was predominantly due to the induction of cataract in the steroid group [8]. Laser treatment, although less utilised now, certainly continues to have a role to play in early CSME not involving the fovea. This treatment may also be used in combination with other agents and have lasting effects.

The exact mechanism of action of laser photocoagulation induced resolution of DME is unknown.

Another theory proposes that the beneficial effect of laser photocoagulation is due to restoration of a new RPE barrier. The RPE cells may respond to the injury in several ways: if the lesion is small, the RPE defect can be filled by cell spreading; if the defect is larger, the cells can proliferate to resurface the area, and the RPE can produce cytokines (e.g. TGF-b) that antagonise the permeabilising effects of VEGF. Although conventional laser photocoagulation that uses high intensity light has been beneficial for the treatment of DME, it can be associated with complications such as choroidal neovascularisation, subretinal fibrosis or symptomatic scotomata. These complications can cause symptomatic visual loss [1]. With the use of modern day lasers, the duration and power of burns can be reduced, thus lessening side-effects, but it is important to still produce an effective burn.

Steroids have always been an attractive option for the treatment of DMO due to their anti-inflammatory and anti-VEGF properties. Several trials have investigated the effects of triamcinolone (Kenalog) even though it is not licenced for use in the eye. As discussed above, the DRCR.net investigated the use of triamcinolone 1mg and 4mg (Trivaris – this formulation is not available in the UK) against focal / grid laser but was unable to show a sustained benefit after the first four months [8]. Limitations of this drug include the risk of sterile endophthalmitis (especially with the Kenalog formulation), cataract formation and raised intraocular pressure (IOP). Other groups such as Haller et al. investigated dexamethasone DDS implants (350µm and 700µm) for diabetic macular oedema with promising results in improving visual acuity and reducing macular oedema [9].

The development of intravitreal implants has allowed sustained release formulations such as fluocinolone acetonide (Iluvien, Alimera Sciences) and dexamethasone (Ozurdex, Allergan). The FAME study group [10] were able to demonstrate long-term benefits from sustained release inserts releasing 0.2µg/d (low dose) or 0.5µg/d (high dose) fluocinolone acetonide (FA) over three years in patients with DMO. At month 36, the percentage of patients who gained ≥15 in letters was almost 30% in the FA insert groups compared with almost 20% (P=0.018) in the sham group. The sub group with chronic oedema (>3 years) appeared to have the most benefit (34% vs. 13.4% improving by ≥15 letters). Side-effects in the trial included most phakic patients requiring cataract surgery (>80%), almost 40% requiring pressure lowering drops and almost 5% in the low dose group requiring incisional glaucoma surgery [10]. Although now licensed for use and recommended by National Institute for Health and Care Excellence (NICE) for pseudophakic patients with chronic DMO, its use is likely to be limited in view of the side-effects. Ozurdex has yet to be licensed for the treatment of DMO at the time of writing.

Elman and colleagues, as part of the DRCR.net study, evaluated intravitreal ranibizumab (0.5mg) or triamcinolone (4mg) combined with focal / grid laser compared with focal / grid laser alone for the treatment of DME [12]. They included 854 eyes of 691 patients with a visual acuity of 20/32 to 20/320 and DME involving the fovea. They compared prompt (within 3-10 days of injection) with deferred laser (≥24 weeks) and the main outcomes were evaluated after one year. The one-year mean change in the visual acuity letter score from baseline was significantly greater in the ranibizumab + prompt or deferred laser group (+9, P<0.001) but not in the triamcinolone + prompt laser group (+4, P=0.31) compared with the sham + prompt laser group (+3). In the pseudophakic group, triamcinolone and prompt laser appeared comparable to the ranibizumab groups, however, elevation in intraocular pressure was more frequent in this group. There were also three cases (0.8%) of endophthalmitis in the ranibizumab groups, reminding us that anti-VEGF injections do have risks associated with them.

Since then a plethora of other trials including RESOLVE, RESTORE, RISE and RIDE have all studied the efficacy of ranibizumab (0.3mg and 0.5mg) and more recently, VIVID-DME and VISTA-DME are investigating the efficacy of Aflibercept (0.5mg-2mg)in DME. This is a soluble VEGF receptor fusion protein which binds VEGF and placental growth factor and has been shown to increase BCVA by 10-12 letters at 1 year with 2 monthly dosing after the loading phase. All trials have concluded that anti-VEGF treatment is superior to sham or laser treatment with significant improvements in BCVA [3].

The RESTORE study was a 12-month, double-masked, multicentre, phase III study where 345 eligible patients were randomised to ranibizumab alone, ranibizumab and laser or laser alone and evaluated over 12 months [13]. The results of this study showed that ranibizumab injections alone and combined with laser were superior to laser monotherapy in improving BCVA letter score over 12 months (+6.1 and +5.9 vs. +0.8; both P<0.0001).

A meta-analysis of both RESTORE and DRCR.net has shown that the visual acuity of eyes randomised to ranibizumab plus laser was approximately twice as likely to improve by 10 letters than the visual acuity of eyes randomised to laser photocoagulation alone. In terms of loss of vision, the study showed that eyes treated with ranibizumab plus laser were over three times less likely to lose 10 letters in visual acuity (relative risk=0.28, 95% CI 0.15 to 0.53, P<0.001) [14].

The RESTORE study [13] additionally showed an increased efficacy of ranibizumab in those with a central retinal thickness >400µm, which has led to the NICE recommendation.

It is now recommended to treat those with visual impairment due to DMO with a central retinal thickness of >400µm with ranibizumab [14]. Anti-VEGF agents have therefore become the mainstay of treatment for significantly thickened DMO affecting the central macular area. The RESTORE study also confirmed its safety and did not show any increased risk of cardiovascular or cerebrovascular events and had no cases of endophthalmitis.

It is likely that patients with DMO will require an average of seven injections during the first year (RESTORE study data) reducing to four in the second year and three in the third to sustain results and improved visual acuity [14]. Aflibercept, although not yet authorised by NICE at the time of writing, has been shown to be very effective in DME and has a favourable safety profile. It is likely to become more utilised in the future in view of the less frequent dosing schedule.

If anti-VEGF treatment fails or is contraindicated such as after a recent cerebrovascular accident or myocardial infarction, the clinician will need to decide if steroid implants such as fluocinolone acetonide will benefit the patient with all their inherent risks.

The mechanisms for the potential benefit of vitrectomy are relief of vitreomacular traction, transvitreal oxygenation and improved growth factor diffusion away from the premacular retina. There are five small published randomised controlled trials on this subject with limited evidence to suggest a benefit from surgery [15]. Those with OCT signs of traction such as an epiretinal membrane or taut thickened hyaloid have been reported to be associated with a modest improvement in vision in prospective studies, but this has not been subjected to a controlled study. Vitrectomy for DMO therefore, if considered, should be restricted to those with OCT signs of traction.

In recent years several of these newer treatment options have become available to ophthalmologists to treat their patients with DMO. Although they have been shown to be clinically effective, their expense and need for regular treatments does not make them long-term viable options. The search for longer term therapies with fewer side-effects therefore continues.