The International Council of Ophthalmology: what is it and is it useful for UK ophthalmologists?
By Simon Keightley

ICO Director for Examinations and Assessments, Simon Keightley, explains the history and role of the organisation today, as well as outlining recent changes to the ICO examinations.

Prior to July 2008, International Federation of Ophthalmological Societies (IFOS) was the official name of the organisation, with the ICO serving as the executive body. But over the years the ‘ICO’ became better known than IFOS, leading to considerable confusion and a proposal to adopt a single name.

The names for the separate parts of the group are now combined under one name, the International Council of Ophthalmology.

The ICO Mission Statement is as follows: “The International Council of Ophthalmology works with ophthalmologic societies and others to enhance ophthalmic education and improve access to the highest quality eye care in order to preserve and restore vision for the people of the world.” 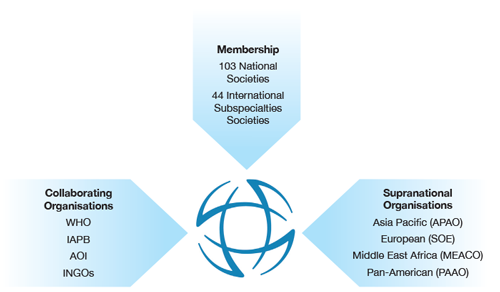 As an organisation, the ICO acts as a coordinating body and central point for global ophthalmology by collaborating with three groups of organisations (see Figure 1). It has 143 national, regional and subspecialty member societies from around the world. These are all members of the ICO and include the Royal College of Ophthalmologists. In addition, other collaborating organisations including the World Health Organisation (WHO) and the International Agency for the Prevention of Blindness (IAPB), as well as the supranational ophthalmic organisations, are all linked with the ICO.

The ICO has three linked programs in order to achieve its goals:

In Enhancing Eye Care, the ICO helps to define and share information on appropriate eye care. It supports the establishment of a universal high standard of quality for ophthalmic professional services to improve access to affordable, quality eye care for all people worldwide. Examples of this include publishing clinical guidelines appropriate for worldwide use in diabetic retinopathy and glaucoma, as well as assisting the WHO in defining the global standards for the International Classification of Diseases. It is compiling a worldwide database of ophthalmologists in practice and training in order to enhance the distribution of such expertise across the world. In 2017, the ICO collaborated with the Magrabi Eye Institute to open the Magrabi – ICO Cameroon Eye Institute in Yaounde, Cameroon as a regional training centre to educate the next generation of ophthalmic leaders in Francophone Africa.

Advancing Leadership requires the ICO to collaborate with member societies to identify future leaders of the profession in those countries. It runs a World Ophthalmology Roundtable on Leadership Development (WORLD) to bring leaders of ophthalmological societies and educational institutions together for a number of relevant meetings to exchange information and ideas that will help them develop effective organisations and programs to enhance ophthalmic education and access to eye care. In addition, a primary commitment of the ICO is to foster cooperation and coordination of strategies and activities to improve eye care with non-governmental organisations (NGOs) and other professional societies and institutions committed to eye health.

Refocusing Education is a longstanding goal of the ICO. To fulfil this goal, the ICO offers a large number of educational programs and initiatives including examinations to invigorate and support ophthalmic education, especially in developing countries. The remaining part of this article will focus on this aspect of the ICO’s work in more detail.

The ICO organises the increasingly popular World Ophthalmology Conference. The WOC is the longest running continuous international medical meeting, first held in 1857. It is held in a different region every two years and provides an international audience with a variety of lectures, symposia and workshops addressing a large number of relevant ophthalmological and related topics. At its last incarnation in 2016 in Guadalajara, Mexico, 7545 delegates attended from 119 countries. The next meeting will be held in Barcelona, Spain on 16-19 June this year, with Cape Town, South Africa being the next meeting in 2020. It is becoming very popular, with large numbers of ophthalmologists, as well as allied health professionals, attending.

The ICO is committed to improving ophthalmic education by ‘teaching the teachers’ – offering conferences, courses, curricula and online resources via e-learning and virtual classrooms to anyone involved in ophthalmic education. It has established an Ophthalmic Educators forum and provides symposia and many national and supranational meetings for anyone interested in education and teaching. The ICO has produced curricula for ophthalmic assistants and refractionists, as well as a comprehensive curriculum for ophthalmology trainees and residents. This forms the basis of the ICO examinations. Over the last three years further curricula have been developed in ophthalmic subspecialties to prepare those ophthalmologists interested in developing a subspecialty interest.

The ICO Fellowships programme started in 2001, initiated by the then ICO Treasurer, Balder Gloor, from Switzerland. The programme’s aim is to help promising young ophthalmologists from low-resource countries improve their practical and clinical skills in order to broaden their perspectives of ophthalmology. Fellows are expected to bring the acquired knowledge and skills back to their home countries and take part in local programs to preserve vision and prevent blindness. The ICO offers a number of three month and one-year fellowships to those ophthalmologists from low-resource countries who wish to apply. Since 2001 over 1000 fellows from 83 countries have passed through the programme, which is offered by 111 training centres in 19 subspecialties around the world.

As might be expected, this is a very popular programme and unfortunately many aspiring fellows have to be rejected from the process due to a lack of suitable training centres. The UK as a whole has been sadly remiss at providing such facilities for these very keen ophthalmologists. Only Liverpool and, more recently, Moorfields Eye Hospital have been accommodating. It would be good to see more institutions in the UK offer their services for this very worthwhile programme.

“The ICO works with ophthalmologic societies and others to enhance ophthalmic education and improve access to the highest quality eye care in order to preserve and restore vision for the people of the world.” 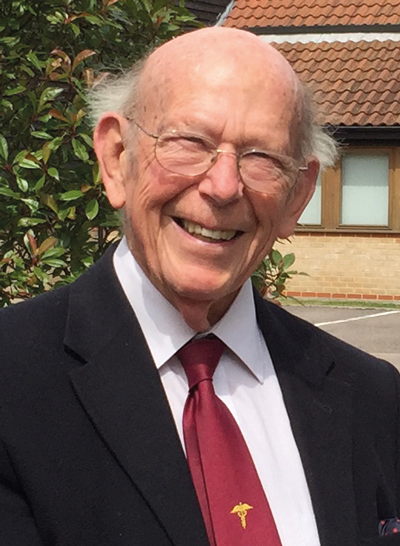 These examinations are unique, being the only worldwide medical specialty examinations. Since they started, over 53,000 examinations have been taken by candidates in over 80 countries. Initially the examinations consisted of a basic science paper and an optics and refraction paper only. These were joined in 1997 by a clinical sciences paper. These examinations ran as theoretical multiple choice question (MCQ) papers, very much along the lines of the original FRCOphth Part 1 examination.

In 2010, a new advanced examination was offered to those ophthalmic trainees / residents who had done at least four years of ophthalmology. Success in this exam in addition to a successful independent face-to-face examination held in the individual country entitles the candidate to a Fellow of International Council of Ophthalmology (FICO) post-nominal.

In 2013, a foundation assessment was launched. This consists of an online MCQ assessment very much along the lines of basic science, optics and refraction and clinical sciences papers (now combined as the ICO standard examination), but run as an open-book revision assessment, available free of charge to anyone booking a standard examination. A complementary ICO App is also available free of charge from the Apple App Store and Google Play, allowing ad hoc revision from mobile phones and tablets.

From 2017, the ICO has introduced subspecialty examinations in glaucoma, paediatric ophthalmology, anterior segment and external eye disease, oculoplastics, retina (surgical and medical) and neuro-ophthalmology. These are all blueprinted to the new ICO subspecialty curricula and have proved popular in several countries, especially in the Indian subcontinent.

From the outset, the ICO examinations office has been run from the UK, initially from a shed in Peter Watson’s back garden! Subsequently it moved to a small office at the Institute of Ophthalmology, but due to ever-increasing numbers, it moved again in 2015 to a purpose built office on the outskirts of East London. ICO examinations have always been modelled on the Royal College of Ophthalmologists (RCOphth) FRCOphth exams, but have always remained as theoretical MCQ examinations with no practical or face-to-face component being included as yet. Like the FRCOphth examinations, each MCQ is a single-best answer question from four options. There is no negative marking. All questions are rigorously standardised by criterion-referencing blueprinted to the various ICO curricula and under the guidance of a dedicated educationalist – very similar to RCOphth methods. It is because of these rigorous standards that the ICO examinations are now being regarded as very prestigious and reflect the very highest standards in ophthalmology assessments. However, the ICO stresses that success in any of these examinations is by no means to be regarded as a licence to practice.

It is up to individual countries and member societies to use the examination as they think fit for the licensing or accreditation of the individual ophthalmologist in that country. Some countries, such as the Dominican Republic and Yemen, are using ICO examination results as a basis for such a qualification and several more, especially in South America, are considering it.

It is disappointing, though not surprising, that very few homegrown UK ophthalmologists take ICO examinations. There are a number of overseas trainees training in the UK that will sit the examinations in the UK, but anyone who wishes to practice in the UK as a consultant is obliged to abide by GMC regulations and take the FRCOphth examinations or their equivalent only, and although ICO examinations are very rigorous they do not include a clinical face-to-face component and therefore are not deemed as equivalent. This is entirely understandable, but it is gratifying that ICO examinations have now developed some degree of reciprocity with the Royal College of Physicians and Surgeons of Glasgow and the Royal College of Surgeons of Edinburgh. Success in the ICO basic science and optics and refraction exams allow exemption for the Part 1 FRCS(Glas) and the Part A FRCS(Ed) exams and vice versa. This has encouraged a large number of overseas ophthalmologists to consider taking ICO exams as a means to getting a FRCS qualification, which is seen as a valuable asset in many countries. It is also encouraging to note that the FICO post-nominal is becoming more of a cachet in many countries.

The ICO is also continuing to further relationships with the Royal College of Surgeons of Edinburgh, who are looking to revise the delivery of FRCS(Ed) examinations overseas. This may benefit both parties, as well as ophthalmology as a whole, by the development of mutual inter-organisational clinical face-to-face examinations, as well as using the considerable expertise of the ICO examinations office with the delivery of written examinations across the world. This may open the door to the use of ICO examinations as a licence to practice in many countries, an ambition that the ICO would be delighted to achieve.

It is hoped that this article has clarified the role of the International Council of Ophthalmology for the reader. Its mission statement has high values to improve the lot of the vision-impaired throughout the world. There is a large amount of work being done for this along with the IAPB and Vision 2020, as well as many other global organisations. As we approach the target of 2020, we must all hope that the Right for Sight for the elimination of avoidable blindness is achieved and our role as ophthalmologists continues for the good of the global population we serve. 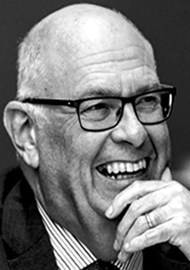