The bionic eye – behind the headlines
By Rod McNeil 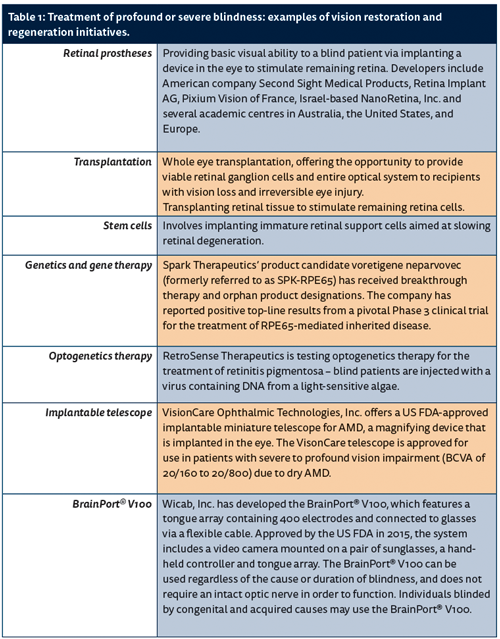 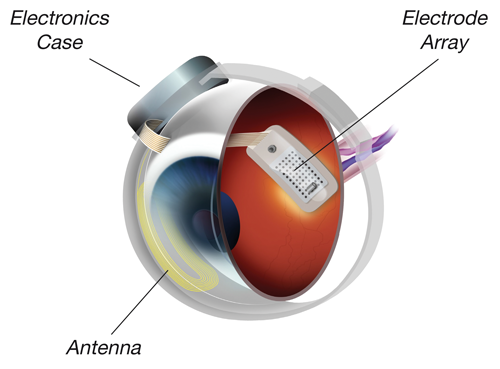 The Argus II retinal prosthesis system secured regulatory approval in the European Economic Area with CE mark certification in 2011 and US Food and Drug Administration (FDA) approval in 2013. The Argus II system was developed to restore some visual function in patients blind as a result of retinitis pigmentosa or outer retinal degeneration and has been implanted in over 210 patients.

“The holy grail of prosthetic vision is face recognition, a breakthrough that we hope may well be attainable with wireless subretinal photovoltaic technology.”

The Argus II system comprises implanted and external components, providing direct stimulation of the relatively preserved inner retina via epiretinal microelectrodes, thereby replacing the function of the degenerated photoreceptors. Implanted components are secured to the eye with a scleral band and sutures, and the 60-electrode array is tacked over the macula. Visual information from a glasses-mounted video camera is converted to a pixelated image by an external processor, before being transmitted to the microelectrode array at the macula. Elicited retinal responses are relayed via the optic nerve to the cortex for interpretation.

Key technical and other features include:

Five-year safety and performance results from the international Argus II clinical trial, involving 30 enrolled participants in 10 centres in the United States and Europe from both pre- and post-market approval implantations, confirm the long-term safety profile and benefit of the Argus II system for profoundly blind retinitis pigmentosa patients [1]:

Measures of functional vision performance on objectively scored real-world tasks show improvement in orientation and mobility, target localisation, shape and object recognition, and reading of letters and short unrehearsed words have been shown. There is nonetheless wide variability in the functional outcomes amongst the patients [2]. The Argus II Study Group concluded that long-term outcome data demonstrate that the Argus II system has an acceptable safety profile, and may allow for durable, stable and reliable restoration of some basic visual function for patients with retinitis pigmentosa who have bare light perception or less.

Grégoire Cosendai, European Vice President of Second Sight, commented: “These long-term follow-up data confirm that the vast majority of patients implanted with the Argus II system experience an objective improvement in visual function that remains stable through five years. A similarly durable benefit has been observed out to 10 years after implantation with the original Argus I system.

“We have reported clear daily life benefits: the way the patients integrate visual function benefit in their daily life. We can demonstrate, for example, how patients can attempt to safely cross the street with and without the system – they are successful 18% of the time with the system off and 65% of the time with the system on [3]. This is a real life change in a task that is extremely difficult to achieve if you’re blind, but is demonstrably and significantly more successful with the Argus II.”

Mr Cosendai continued: “Since 2011 we have introduced 15 upgrades to the Argus II system, and in early 2017 we plan to introduce enhanced external hardware, including a new and significant update to the video processing unit (VPU) that may feature a novel face detection system, as well as 3D vision with stereo cameras mounted on new eyewear to provide for improved obstacle detection and navigational capabilities. The new VPU will possess processing power over 25 times greater than the current Argus II system and will enable enhanced image processing, including contrast enhancement and electronic zooming, and retinal stimulation protocols. Development is underway on achieving improved resolution by adjusting retinal stimulationW protocols.”

Last year the company launched a pilot study (n=5) in the UK to evaluate the utility of the Argus II system in patients with severe to profound vision loss due to dry age-related macular degeneration (AMD). Preliminary results are positive, and if subsequently confirmed, Second Sight plans to conduct a larger pivotal study in Europe and the US to demonstrate the safety and effectiveness of Argus II in dry AMD. The company is also developing a visual cortical prosthesis named Orion I visual prosthesis system, designed to restore vision with cortical stimulation to treat profound blindness from eye trauma, optic nerve disease and other causes. 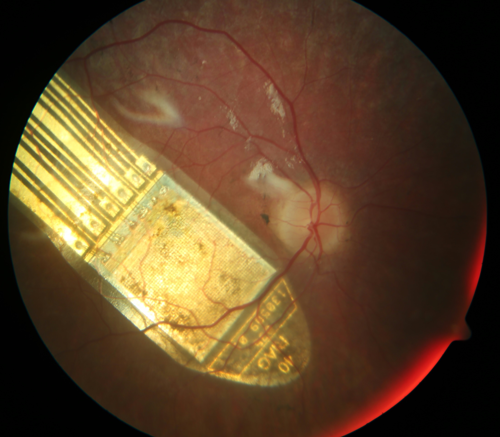 Retina Implant AG received CE marketing approval for its new wireless subretinal Alpha AMS neuroprosthetic implant in March 2016, the next generation of the Alpha IMS device CE marked in 2013. The latest Alpha AMS technology has been evaluated in clinical trials in Germany and at Oxford University since 2014. To date, 52 patients have been implanted with a Retina Implant AG subretinal visual prosthesis, 15 receiving the latest Alpha AMS model.

The Retina Implant Alpha AMS system consists of a subretinal microchip (multiphotodiode-array) on a polyimide foil, both placed subretinally, and a power supply and signal control cable, ending in a receiver coil, housed together with electronic circuits in a small box placed subdermally at the temple and retroauricular region behind the ear. The Alpha AMS light-sensitive 1600 photodiode-array is positioned in the layer of the degenerated photoreceptors, and stimulates the bipolar cell layer at the retinal input, using the processing power of the neuronal network of the inner retina. The transchoroidal implantation procedure is more challenging than the epiretinal insertion approach for Argus II, entailing a two-part surgical procedure with a typical duration of between five and eight hours.

An interim clinical trial report published in 2015 provides proof of principle that the subretinal Alpha IMS visual prosthesis can restore reliably measurable visual function and potentially useful vision in low-vision or very low-vision range in selected patients with end-stage hereditary retinal degenerations [4]. Findings during up to 12 months’ follow-up of 29 blind patients with outer retinal degeneration implanted with the Alpha IMS device include:

Improvement of visual function from blindness to a low-vision or very-low vision range can provide considerable benefit for participants who become blind from progressive degeneration of the retina, added study authors. Most participants in this international multicentre clinical trial were able to localise objects with a good contrast within their own environment, although technical failures of the implants limited the number of participants who performed evaluation tests in later follow-up visits.

Benefit in daily life experience for around half of implanted patients

Professor Eberhart Zrenner, co-founder of Retina Implant AG and co-author of the 2015 interim clinical report, commented: “We cannot predict which patients will benefit most in terms of visual perception after implantation. Clinical experience shows that approximately one quarter do not benefit in daily life, due to advanced retinal degeneration, while another quarter experience improved light perception but cannot recognise shapes or details. Around 50% of implanted patients experience useful new daily life experiences with the implant, with one quarter being able to recognise and read letters.

“The best result of measured grating visual acuity is 20/546. The time necessary for relearning vision is relatively short, with patients often able to localise objects or details within a few weeks after implantation.” 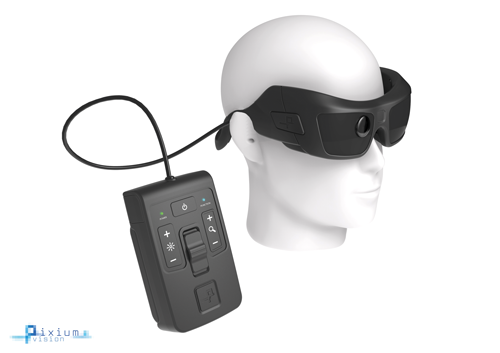 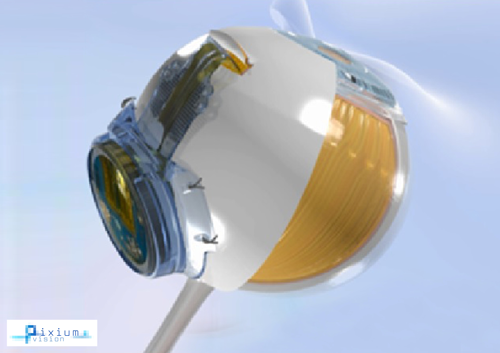 Paris-based Pixium Vision obtained CE mark certification of its IRIS®II bionic vision system in July 2016. The ‘Intelligent Retinal Implant System’ V2 is a 150-electrode epiretinal implant equipped with a bio-inspired camera designed for people with vision loss from outer retinal degeneration. IRIS II features an explantable design. The electrode array is secured on the retinal surface by a patented support system intended to allow for explantation so as to facilitate future next-generation replacements or upgrades to hardware and / or software. Another distinctive feature is a bio-inspired camera intended to mimic the functioning of the human eye by continuously capturing changes in the visual scene with its time independent pixels.

Khalid Ishaque, CEO of Pixium Vision, explained: “The median implant surgery time for IRIS II is approximately two to two and a half hours, which compares favourably with other CE-mark approved bionic prosthetic vision systems. We have also focused on increasing the number of electrodes to 150 from the earlier 49-electrode model, to increase the likelihood of better visual outcomes overall, with better resolution. The explantable design offers patients the possibility of benefiting from future system or technology enhancements through modular upgrades, via hardware and / or software.”

The IRIS II clinical trial, underway across multiple European centres, is an open label, non-randomised prospective study designed to assess longer-term performance of the IRIS II bionic vision system as a treatment to compensate for blindness in patients (n=10) with retinal dystrophy (retinitis pigmentosa, cone-rod dystrophy, or choroideremia). Efficacy is measured using functional vision and visual function tests before and after implantation as well as with the system on and system off, with follow-up through to 36 months.

“Preliminary interim data evaluating functional vision and visual acuity following implantation of IRISII suggest outcome benefits that are similar to, and in some instances better than, those published with Argus II through 18 months’ follow-up,” noted Khalid Ishaque. “Patient experience emphasises the benefit of additional orientation guidance indication provided by the bionic vision implant, with patients reporting that they feel empowered to be more independent and to navigate with greater confidence.” 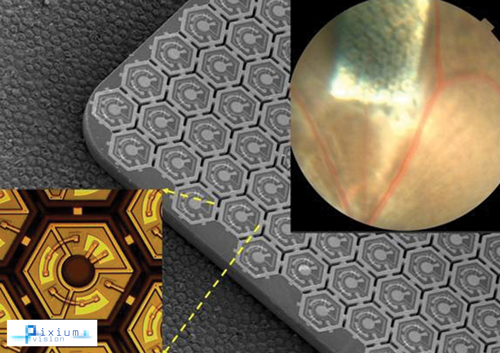 Can we do better? Photovoltaic technology advances towards clinical testing

Pixium Vision is developing a second retinal bionic vision system named PRIMA in partnership with Daniel Palanker and his team at Stanford University. This is a miniature, wireless subretinal photovoltaic prosthesis for vision restoration in patients with dry (AMD). Currently in preclinical development, Pixium Vision will launch clinical trials evaluating PRIMA in Europe later in 2016.

The photovoltaic subretinal prosthesis directly converts light into pulsed electric current in each pixel, stimulating nearby inner retinal neurons. Vision information is projected onto the retina by video goggles using pulsed near-infrared light. Researchers at Stanford developed the photovoltaic arrays with pixels down to 70µm in width, and tested prosthetic vision ex-vivo and in-vivo [5]. Tests in animals blinded by retinal degeneration showed the implant restores visual acuity to an equivalent of 20/250, five times greater than the visual acuity of up to about 20/1200 observed with existing retinal prostheses in humans, according to researchers. The modular design of these wireless arrays allows scalability to thousands of pixels, and combined with ease of implantation with an implant surgery time goal of sub one hour, offers a promising approach to restoration of sight in patients blinded by retinal degenerative diseases.

“The holy grail of prosthetic vision is face recognition, a breakthrough that we hope may well be attainable with wireless subretinal photovoltaic technology,” added Khalid Ishaque.

Factors to consider when selecting an appropriate bionic eye implant for an individual profoundly blind due to retinitis pigmentosa or other hereditary retinal disease include complexity and duration of implantation procedure, long-term stability of vision benefit after implantation, short- and long-term complication rates and functional performance and reliability as a chronically implanted device. Patients expect upgradeability as technology evolves, together with provision of vision rehabilitation and learning support from artificial vision specialists or multidisciplinary centres.