Surgical options for the treatment of hyperopia
By Allon Barsam

The modern refractive surgeon has a variety of options available to treat patients with hyperopia who wish to be independent of spectacles and contact lenses. Unlike in low myopia where presbyopic patients may have the ability to see well for close work without spectacles, hyperopia confers no such advantage and the successful treatment of the presbyopic hyperope can be particularly rewarding for both patient and surgeon alike. However, despite the array of available options, the surgical management of this condition remains one of the greatest challenges in refractive surgery.

It should be noted that all of the surgical options described in this article could also be combined with treatment to correct any coexisting astigmatism in these hyperopic patients. The specific surgical considerations for astigmatism treatment will be covered in a subsequent article. This article has not considered thermal treatments such as conductive keratoplasty as most surgeons have abandoned these techniques as the rate of regression of effect and the potential for induction of irregular astigmatism are unacceptably high.

The overall prevalence of hyperopia is around 10%, affecting approximately 14 million people in the US [1,2]. Hyperopia may be classified by the degree of refractive error: low hyperopia is +2.00D or less; moderate hyperopia ranges from +2.25D to +5.00D; and high hyperopia is +5.25D or more.

There are several reasons why the surgical management of hyperopia can be particularly challenging. Firstly, hyperopic patients who are not yet presbyopic may have a significant disparity between their manifest (dry) and latent (cycloplegic / wet) refractions. This means that a refractive treatment targeted on their manifest refraction, while being the best option for immediate restoration of good unaided distance vision may result in regression of effect when the patient approaches presbyopia and the residual hyperopia which may have been untreated becomes unmasked. Secondly, hyperopes often have different anatomy to myopes in terms of corneal shape, anterior chamber depth and axial length; this has implications for the feasibility and safety of laser refractive surgical correction, implantable collamer lenses and accurate lens calculations for pseudophakic intraocular lenses [3,4]. These factors will be discussed in more detail for each individual treatment in turn.

Surface laser excimer ablation goes by a variety of different names including: photorefractive keratectomy (PRK), laser epithelial keratomileusis (LASEK), epi-LASEK and advanced surface ablation. The outcomes and risks are essentially the same. The advantages of this technique over laser in situ keratomileusis (LASIK) are the avoidance of the potential for flap-related complications. However, in hyperopia there are several unique considerations. Some of these considerations are also of relevance for hyperopic LASIK [5]. 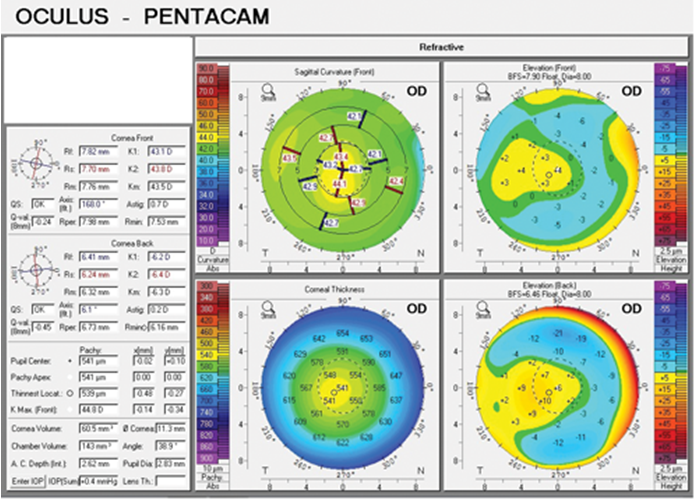 Hyperopic excimer laser refractive surgery relies on laser pulses applied in an annulus around the mid corneal periphery in order to induce central corneal steepening, increase corneal power thereby reducing hyperopia (Figure 1). More laser pulses and a greater amount of tissue ablation are necessary in a hyperopic treatment than for the equivalent myopic patient. Furthermore, the location of the laser activity in the mid-periphery of the cornea, rather than in the centre as in myopia, makes surface treatment more susceptible to the induction of corneal haze. Some regression of effect is well described in all hyperopic laser refractive surgery, as the mid-peripheral location of treatment is more susceptible to stromal remodeling than the central cornea; this is particularly true of hyperopic surface laser treatments as the removal of the epithelium triggers a more profound wound healing response. For this reason, most surgeons reserve surface laser treatments only for low hyeropia in patients where LASIK is not possible or unadvisable, such as in those with thin corneas.

LASIK remains the treatment of choice in patients with low hyperopia who are not yet presbyopic, providing patients fulfill the standard safety criteria for laser vision correction such as a normal corneal topography and an adequate tear film.

The LASIK flaps make wound healing and regression of effect less of an issue here than with surface laser treatments.

The author’s personal preference is to treat up to 4.00D of hyperopia but not more due to risk of regression of effect and residual hyperopia when treating higher levels. Hyperopic presbyopes can still be treated with LASIK providing the degree of hyoperopia is low enough to accommodate the extra treatment required for a laser blended vision treatment (mini-monovision). For example, if the non-dominant eye of a 60-year-old refracted to +2.00D then in order to aim to leave this eye -1.50D spherical equivalent postoperatively would require a +3.50D hyperopic treatment.

Another consideration is the predicted postoperative corneal keratometry that will still allow good quality of vision and in general most surgeons prefer not to leave the cornea more than 50.00D postoperatively. Hyperopic treatments are more prone to quality of vision issues if the laser treatment is decentred at all so for high hyperopic treatments targeting the laser on the corneal vertex rather than on the pupil may be preferable. Finally, as laser pulses are applied more in the periphery of the cornea and a larger corneal flap is required, hyperopic laser treatments tend to be more prone to dry eye postoperatively.

For many of the reasons described thus far some surgeons have a lower threshold for recommending refractive lens exchange in hyperopic presbyopes than in myopic presbyopes.

There have been several studies published recently looking at combining hyperopic LASIK with corneal crosslinking [7], as well as studies looking at different modalities of laser vision correction such as small incision lenticule extraction (SMILE) [8]. As yet there is not evidence for superiority of these treatments in long-term randomised controlled studies.

In patients who are already experiencing the symptoms of presbyopia, refractive lens exchange (RLE) represents a good surgical option [9]. The procedure involves removing the natural lens of the eye and replacing it with an intraocular lens. Advantages include: no regression of refractive effect; no long-term risk of dry eye; removal of the risk of angle closure glaucoma in eyes that otherwise have a predisposition to this; and avoiding the risk of cataract in the future. The main disadvantage of this over laser eye surgery is the risk of sight loss due to bleeding or infection, which is estimated to be around 1:2000 [9], whereas the risk of significant loss of vision (more than two lines of best corrected visual acuity) in laser eye surgery is much lower [10]. There is also a long-term risk of retinal detachment [11].

There are several lens options for providing uncorrected distance, intermediate and near vision. These include: monovision; accommodating lenses; multifocal lenses of various powers and types; and extended depth of focus lenses.

RLE is not a good option for pre-presbyopic patients, as they will perceive a significant loss in quality of their intermediate and near vision even with the advanced lens options described earlier. Furthermore, the risk of retinal detachment makes this an inferior choice to phakic intraocular lenses for these patients.

Phakic intraocular lenses are the treatment of choice for patients who are pre-presbyopic or unsuitable for laser eye surgery but satisfy the anatomical requirements for safe placement of the lenses. The operation involves placing an intraocular lens into the eye without removing the natural lens of the eye. The advantage of this over RLE is the preservation of normal accommodative function and a much lower risk of retinal detachment. There are three main options:

Each of these options has various advantages and disadvantages. The author’s preference is the Visian ICL as this causes the least endothelial cell loss and, in fact, long-term endothelial cell loss beyond the first few years is thought to be negligible. It can be used to treat hyperopia with lens powers up to +21.00D. The main disadvantage of the ICL is that there is a slightly higher chance of developing cataract with this lens. However, with the newest centraflow technology to allow normal circulation of aqueous over the anterior lens this risk is now also thought to be very low indeed. Furthermore, this risk is also lowered by not using this lens in patients who are well into the presbyopic age range. All three options require an adequate anterior chamber depth for safe implantation.

Long-term follow-up on the Visian ICL phakic IOL (STAAR Surgical, Monrovia, California, USA) has shown excellent results. A study followed a group of hyperopes with preoperative spherical equivalent of +4.80D for three years [12]. Mean UDVA was 20/23 at three years, with 69% achieving at least 20/20. Manifest spherical equivalent was -0.13D at three years. Similarly, 8% lost one or two lines of CDVA with mean endothelial cell loss of 5% and no reported adverse events.

A 47-year-old patient with a manifest refraction of +7.00D and cycloplegic refraction of +8.00D in each eye has become intolerant of her contact lenses and wishes to be completely independent of spectacles. On examination her anterior chamber depth is 2.6mm in each eye. Otherwise her ocular examination was unremarkable. What is the most appropriate surgical option for her, if any?

This patient is not suitable for laser eye surgery on account of her high hyperopia and need to be completely independent of spectacles. Her anterior chamber depth is a contraindication to phakic intraocular lenses. The best surgical option for her is bilateral RLE with a multifocal intraocular lens. Although this option is preferred in patients who are further into the presbyopic age group, given the level of refractive error and that she has a dioptre of latent hyperopia she will most likely have been experiencing symptoms of presbyopia to a significant degree already.

There are several multifocal intraocular lens options available. For patients who wish to be completely independent of spectacles for all activities then the add power in the IOL plane will need to be more than 3.00D. The author’s preference is a trifocal IOL which provides distance vision as well as an intermediate power of +1.66D in the IOL plane and a near add of +3.33D in the IOL plane. Patients need to be counselled about the risk of glare and haloes at night although adaptation is usually achieved after six to 12 weeks. Postoperatively it is important for patients to have a healthy tear film and clinicians should have a low threshold for recommending a YAG laser posterior capsulotomy as these patients are exquisitely sensitive to any thickening in the posterior capsule.

This article has reviewed the main evidence-based surgical options for hyperopia. There are several excellent options with the optimal choice of procedure being dependent on the level of refractive error, age of the patient and the unique anatomical factors in each case. 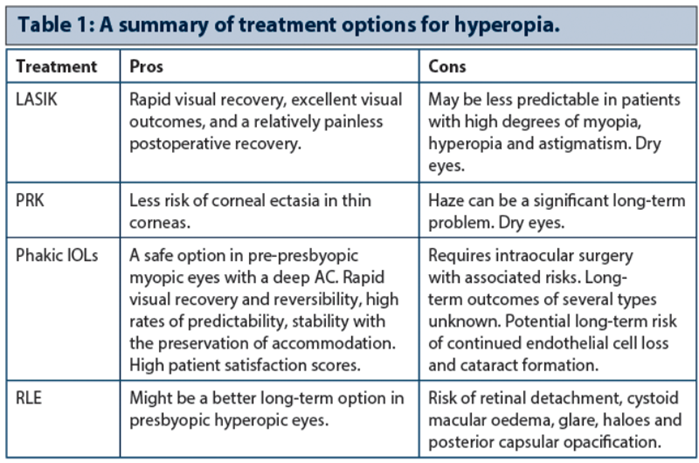 Mr Barsam’s article originally appeared in the Journal of the Association of Optometrists: Optometry Today 2016;56(2):76-80. www.optometry.co.uk 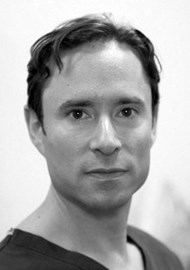