Should we move towards procedure-specific consent forms?
By SZ Tan, M Arunakirinathan, A Rajasekaran, and SA Sadiq

The consent process represents the patient’s acceptance of the information provided to them and an agreement to undergo an intervention as suggested by a health professional. Effective doctor-patient communication, ensuring the succinct delivery of the necessary points in a way that is understood by the patient is central to the consent process. It is paramount that patients are facilitated through the consent process by their clinicians, earning their trust and subsequently maintaining this throughout the duration of their care [1]. Consent must not be viewed as simply the signing of a form; rather it is a process in which the dialogue necessitates “time, clarity of explanation and patience” as specified in Good Surgical Practice, 2008 [2].

Written consent does in no way equate to a binding contract, rather it simply serves as evidence of the completed consent process. Clinicians can refer to the Reference Guide to Consent for Treatment and Examination (Department of Health, 2009) if any doubt during the consent process arises [3]. Discussion of risks is one of the most crucial points to be discussed with a patient and a critical element of informed decision or consent. The term risk refers to any adverse outcome, side-effect or complication, and no statistical threshold of risk exists to determine whether it should be discussed with the patient or not [4,5]. It is more important to warn patients of risks, however rare, that pose substantial life-changing consequences [3].

With an increasing number of medical litigation cases everyday, the consent process needs to be improved. There have been guidelines produced by the Royal College of Surgeons, and its sister Colleges for each speciality to facilitate the consent process. However, not every clinician is fully aware of the guidelines and there is a lack of consistency in documentation of risks and complications for a specific procedure that can lead to medical litigation. Theoretically, procedure-specific consent forms (PSCFs) for common surgical procedures, where specific risks and complications are pre-printed on the consent forms, can improve the level of standardised information delivered to patients compared to generic consent forms, which tend to rely on individual doctors’ experience, memory and training. 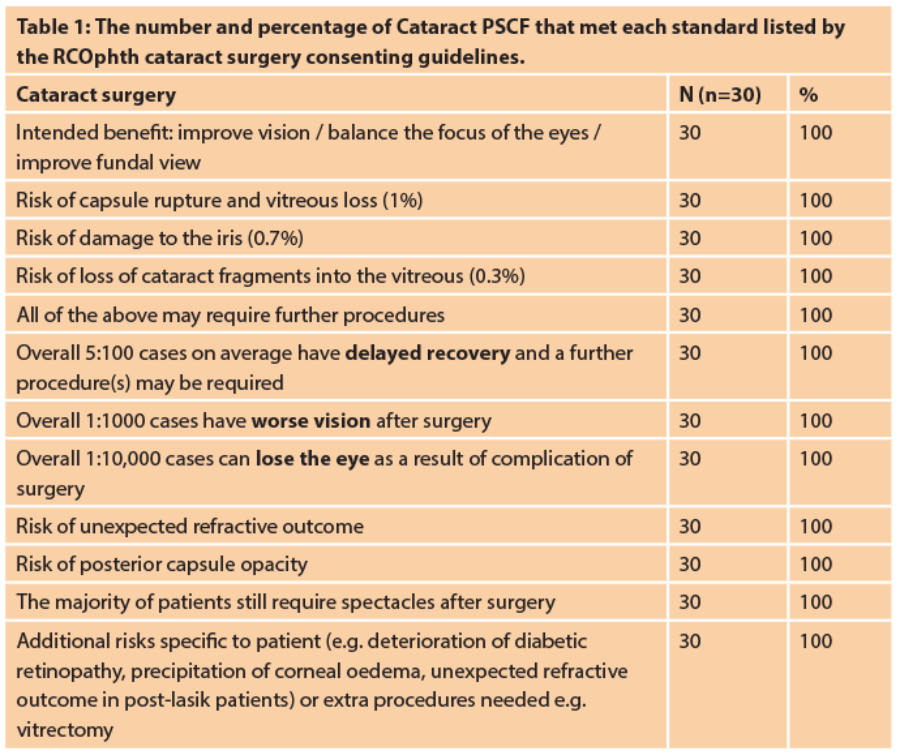 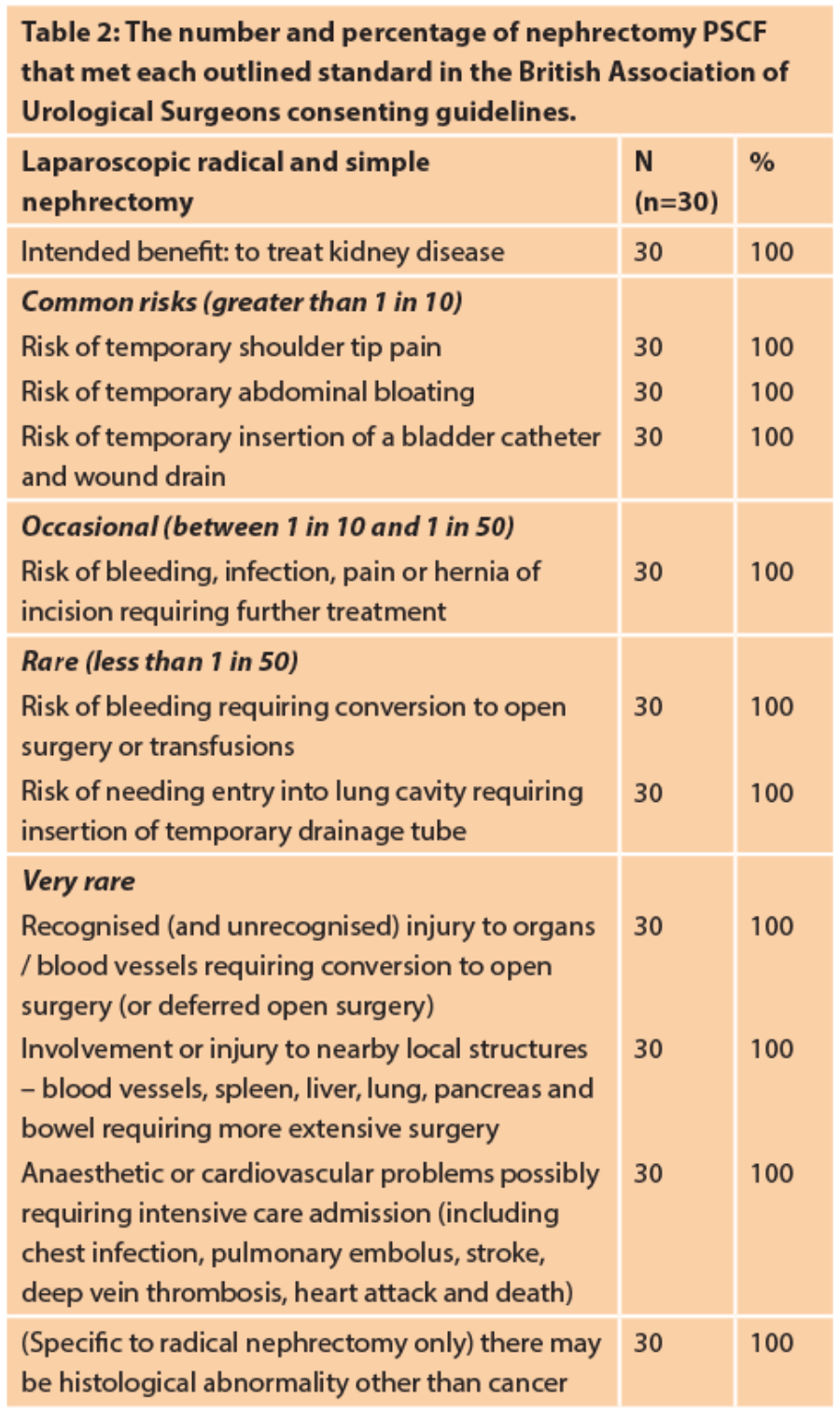 We found that the intended benefit and all 11 major risks outlined in the RCOphth guideline [4], whether common, occasional, rare and very rare were met in 100% of the cataract surgery PSCF (Table 1). One hundred percent adherence to the listed standards set by British Association of Urological Surgeons (BAUS) [6] was also found in the laparoscopic nephrectomy PSCF (Table 2). The intended benefit and 10 named risks were outlined to the patient in all consent forms in a clearly pre-printed and well-presented format. For the generic consent forms, the results from circumcision compared to the consenting guidelines set out by (BAUS) [7] are presented in Table 3. The procedure and purpose were recorded correctly in 100% of consent forms. The common risk (greater than one in 10) such as ‘swelling’ was not mentioned in any of the 30 forms. 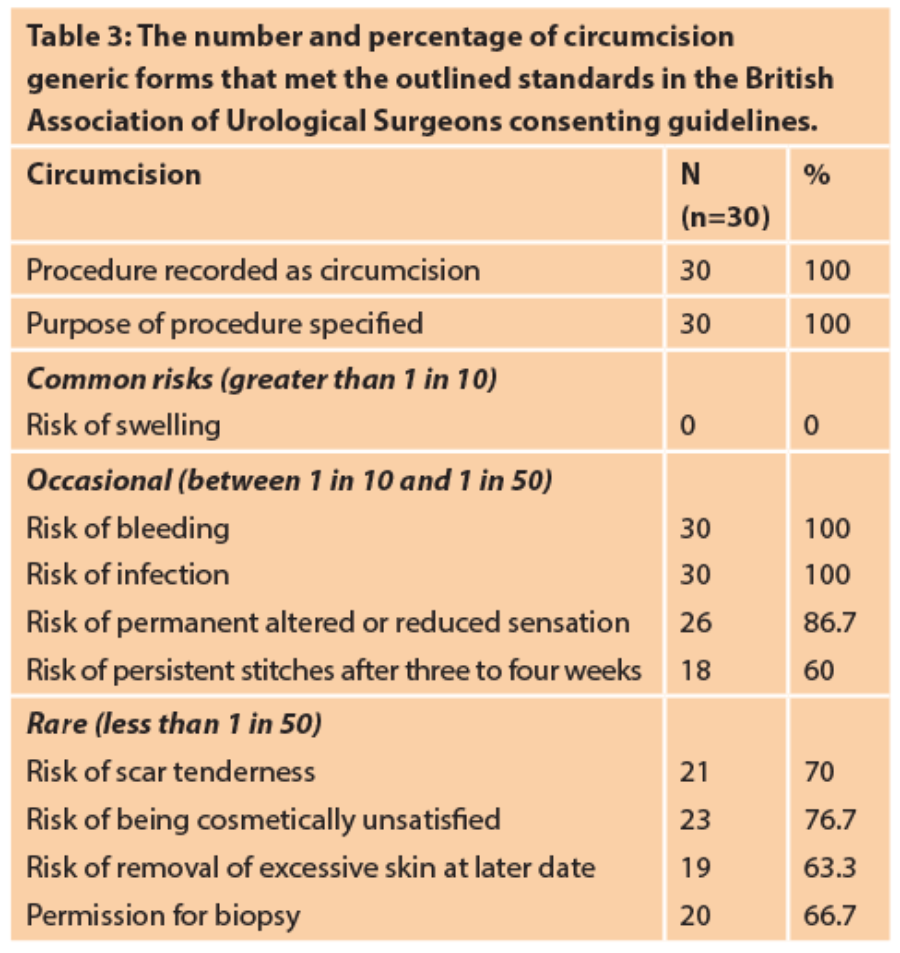 The occasional risks (between 1 in 10 and 1 in 50) as defined by the standards such as ‘bleeding’ and ‘infection’ were specified in all consent forms without fail. On the other hand, other occasional risks, such as ‘altered or reduced sensation’ were only specified 86.7% of the time, and ‘persistence of stitches’ was mentioned in 60% of the cases. Other rare risks were less often mentioned: scar tenderness (70%), cosmetically unsatisfied (76.7%), removal of excessive skin at later stage (63.3%), and permission for biopsy (66.7%). The results of laparoscopic tubal sterilisation generic forms compared to the consenting guidelines set out by the Royal College of Obstetricians and Gynaecologists (RCOG) [8] are presented in Table 4. 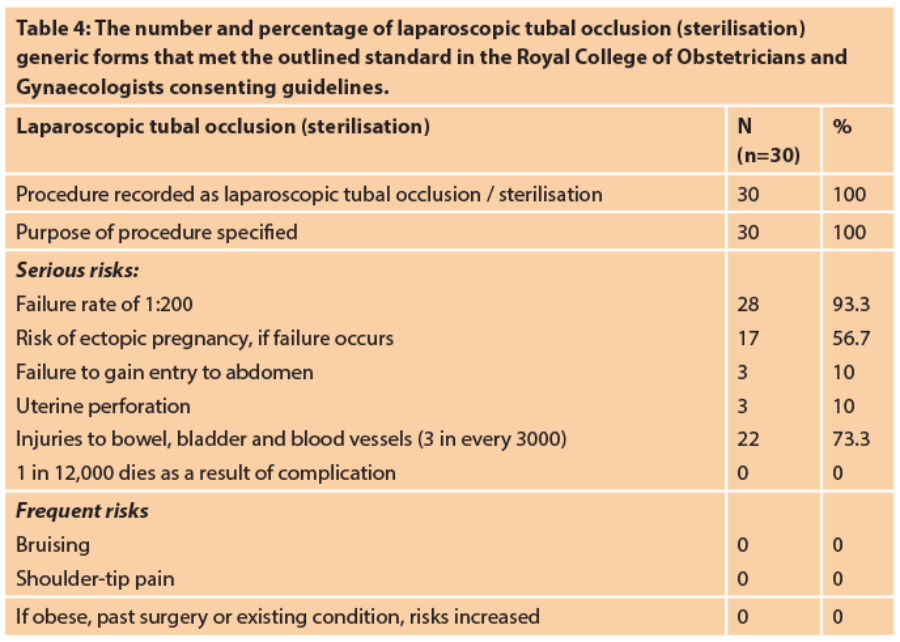 In all cases, the procedure and intended purpose was defined. Of the six serious risks clarified by the RCOG, only the ‘risk of failure’ was mentioned in 93.3% of the consent forms. The rest were less frequently mentioned: risk of ectopic pregnancy in the case of failure (56.7%), failure to gain entry to abdomen (10%), uterine perforation (10%), injuries to bowel, bladder and blood vessels (73.3%). An incorrect rate of ‘1:300’ risk of failure was quoted in one consent form instead of one in 200 as found in the the guideline. Surprisingly, the one in 12,000 serious risk of death as a result of complication was not mentioned in any of the consent forms. Frequent risks of ‘bruising’ and ‘shoulder-tip pain’ were not listed as risks in all cases nor was it ever specified if patients were warned that these quoted risks would increase if they were obese, had undergone previous surgery or had a pre-existing condition, despite the presence of case notes containing consent forms from previous surgery, such as Caesarean sections.

We demonstrated in our study that PSCFs used in cataract surgery and nephrectomy achieved 100% adherence to appropriate Royal College recommendations. This was not a surprising finding as procedure-specific consent forms were designed with reference to the guidelines. The common, occasional and rare risks of the two procedures were all legibly printed on the consent forms and patients consented for treatment received standardised information across the Trust, independent of the clinicians involved in the care.

On the other hand, generic consent forms used in the case of circumcision and laparoscopic tubal occlusion had less favourable results. In circumcision, common risks such as postoperative swelling were not mentioned in any of the 30 consent forms and rare but potentially life-changing complications such as scar tenderness and unsatisfactory cosmetic results were only mentioned in around 70% of the consent forms. It is clear that the consenting clinicians were not always made aware of which important risks to include in the consenting process. In laparoscopic tubal occlusion surgery, a one in 12,000 risk of death was not mentioned in any of the 30 consent forms. Although rare, the risk of death is considered a serious complication and it is important for patients to understand the risk before consenting to surgery [3]. The generic consent forms also demonstrated the lack of consistency in the complication figures quoted amongst clinicians in the same trust and this can be confusing for patients and patients’ friends and families who may have received similar treatment in the Trust or elsewhere.

There is a trend of moving towards PSCFs in common surgical procedures due to their recognised advantages for both patients and doctors [4]:

However, PSCFs are not without issues. Although general risks and benefits apply to most patients, there will be certain risks that are unique to individual patients. There may not be space on the form to adequately express these specific risks as well as other important factors for decision-making including the alternatives to and the consequences of not having a procedure. PSCFs run the risk of involuntary automatism where clinicians may be less likely to explain the pre-printed risks and benefits on the form and tailor them to individual needs. It is important to bear in mind that having the important information on the form does not mean that patients understand them, hence better documentation on PSCF does not always relate to the quality of the consent process as a whole. Where possible, patients should also be given information leaflets or videos regarding the procedures to ensure understanding of the written information on the consent forms.

This study compared the use of PSCFs versus generic consent forms in commonly performed procedures. PSCFs list both specific as well as general complications in a printed form, unlike generic consent forms that have to be filled in by hand and often lack consistency in the complications that are detailed. The study demonstrates the limitations of generic consent forms in terms of delivering standard and pertinent information to our patients. However, the study has its limitations. The grade of doctor taking consent was not recorded. Hossein M et al. showed that there was variation in consenting practice at different grades of consenters in their study [9]. We did not collate this information as the main aim of the study was to have an overview of how each speciality was performing in the consent process using different consent forms, and not to assess individual doctors’ competencies in this process. Furthermore, the consent process should be standardised across a department regardless of the grade of doctors and this study reflects what happens in everyday clinical practice.

The other limitation in this study is that it compared different operations. The study would have been more robust if it compared PSCFs and hand written forms for the same operations. However, this was not possible as the Trust took a decision to use PSCFs for those procedures from a certain date and it may compromise patient safety to withdraw them for the purposes of this study, or ask the consenting doctor to return to generic forms during the study. Furthermore, there will also be a risk of introducing bias if the latter were done, as the doctor will know there is a reason for returning to generic forms and may make a conscious effort to be more thorough during consent. Despite the limitations, the study is still important in providing us with a general idea of how generic consent forms fare compared to PSCFs in common procedures across different specialities and serves as a pilot for any future prospective study looking at a different procedure where PSCF is being developed and the use of PSCF is not yet part of the Trust’s policy.

“Claims for medical negligence within the NHS amount to over half a billion pounds a year and of these the cost for consenting errors runs into millions.”

Claims for medical negligence within the NHS amount to over half a billion pounds a year and of these the cost for consenting errors runs into millions [10]. It is imperative to make clinicians aware of all aspects of the consent process and that it is much more than just filling out a form as this form will be perceived as evidence that the process has been conducted efficiently. In conclusion, we believe that implementing procedure-specific consent forms for common procedures would reap greater rewards as authoritative information with quoted risks and figures from the Royal College guidelines is clearly relayed to the patients. However, clinicians should always aim to tailor the PSCFs to individual needs and the PSCFs should have adequate space for additional comments.