Ischaemic optic neuropathy (ION) is the commonest adult optic neuropathy encountered today in our ageing population, is a common cause of irreversible visual loss and is usually associated with underlying vascular disease.

The condition is classified as follows:

The aetiological process can be:

This review deals only with the commoner nonarteritic anterior ischaemic variety of the disease best designated NA-AION as used throughout Hayreh’s recent textbook [1] and in previous papers by the present author [2]. The annual incidence of NA-AION is reported [3] as being 2.3-10.2 per 100,000 population over 50 years, the mean age at onset being 57-65 years in various studies with significantly higher frequency in Caucasians.

The ONH is divided into three layers: 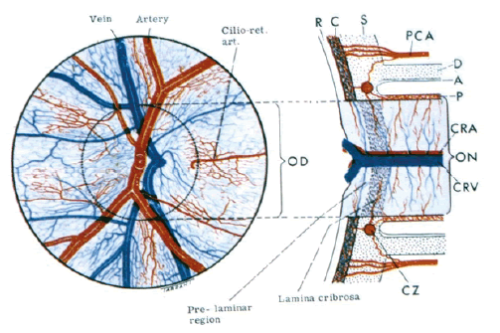 Furthermore, there is an anastamotic link between the medial and lateral short posterior ciliary arteries, forming a complete intrascleral circle of Zinn Haller from which pial vessels arise to supply the retrolaminar ON [4]. 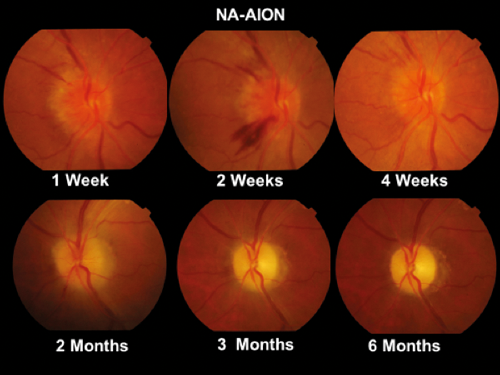 The clinical presentation in a patient with NA-AION is of acute painless visual loss, usually affecting the lower visual field (for explanation of lower field involvement see discussion below) and often occurring on waking or arising in the morning. Visual acuity is normal in 40% of patients, some of whom may complain of mild periocular discomfort and many do not notice the visual field defect unless this extends to fixation. A relative afferent pupillary defect (RAPD) is always present and the optic disc is hyperaemic and oedematous, sometimes with flame shaped haemorrhages at the margins (Figure 2). Examination of the visual field will show an inferior type defect in 75% of cases (Figures 3 and 4). The disc oedema resolves in three to six weeks and the disc is usually flat at three months, and at six months the process is complete with no subsequent change occurring in the disc appearance or visual function. Disc cupping does not develop as is commonly the situation in the arteritic variety of AION. 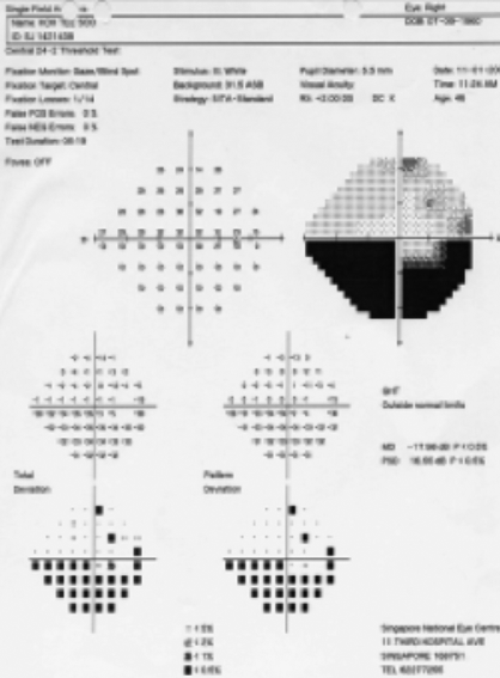 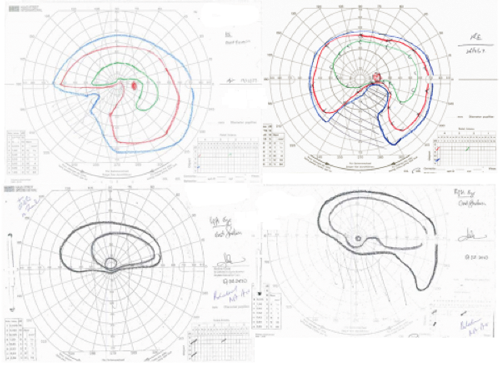 The most important feature at outset is that the disc is hyperaemic not pale, despite this being an ischaemic process, thus often mistaken for anterior optic neuritis. The standard textbook [3] states: “The optic disc edema in NAION may be diffuse or segmental, hyperemic or pale, but pallor occurs less frequently than in the arteritic form.” The Wills Eye Manual [5] records: “pale disc swelling (often segmental).” Hayreh and Zimmerman [6], however, say the disc is never pale at outset (‘never’ a dangerous word in neuro-ophthalmology) thus one can see how confusing this issue remains.

Significant improvement in visual function is not to be expected, acuity improvement being reported in less than 10% [2], though some higher incidence reported may be due to the patient’s alteration of fixation. Visual field improvement occurs in only 10-15% of patients and there is never complete recovery of both acuity and visual field.

The condition is usually seen in patients with a small optic disc, so-called ‘disc at risk’, and the commonest associated medical conditions are systemic hypertension reported in 34-50% and diabetes in 5-25% [3]. Hyperlipidemia was found in 50.9% of patients in a recent Asian study [2]. The condition is usually stable by six months and ipsilateral recurrence is extremely unusual, but contralateral eye involvement was reported in 14.7% in the US study [7]. Sleep apnoea is also a suggested aetiological factor and there is an increased risk of ischaemic stroke following an episode of NA-AION [8].

There is no proven effective treatment [3] other than that of any underlying medical condition. Hypertensive patients should be instructed not to take their medication late in the day. As the condition is not thrombotic, embolic nor inflammatory, there is no place for corticosteroid, aspirin or anticoagulants in management. Neuroimaging is not required unless the case is atypical and if performed it should be noted that the optic nerve in NA-AION does not enhance as it does with inflammatory and infiltrative optic neuropathies. 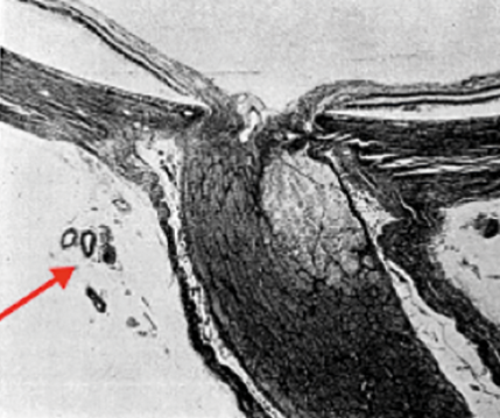 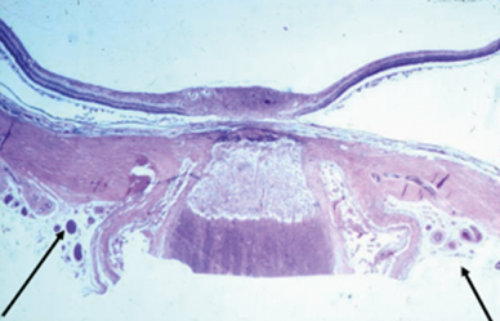 In contrast to the situation with the arteritic variety of AION, there is no convincing pathological report with associated clinical history of acute NA-AION. A specimen in Cogan’s book [9] shows a clear retrolaminar infarct in the presence of a patent posterior ciliary circulation (Figure 5a). The pathology of arteritic AION as shown in Figure 5b, in contrast, shows the infarcted ONH and retrolaminar ON with extensive inflammatory involvement of the posterior ciliary vessels by giant cell arteritis (GCA).

There are two important elements in relation to NA-AION which need to be explained. Firstly, the ONH is hyperaemic at the outset of NA-AION and will only become pale as the oedema subsides after three to six weeks. This initial hyperaemia often leads to an incorrect diagnosis of anterior optic neuritis, but in the latter central vision is primarily involved. The question, therefore, is that if NA-AION is an ischaemic process associated with ischaemia /non-perfusion of the ONH why is the disc hyperaemic at outset? A recent proposal is that vitreous traction on the disc may be an important causative factor in the aetiology of NA-AION. The authors of this proposition are even suggesting that the condition be renamed ‘papillary vitreous detachment neuropathy (PVD-N)’ [10] and it is difficult to ignore this suggestion coming from such an eminent authority as WF Hoyt. Hayreh [11] in reply as expected vigorously refutes this suggestion and insists that ischaemia / non perfusion is the key factor in aetiology. However the actual mechanism of the disc hyperaemia at the onset of NA-AION remains uncertain but as the infarction is incomplete the remaining uninvolved branches of the ciliary vessels may undergo compensatory dilatation and produce this hyperaemia.

“The management of patients with NA-AION is not easy in elderly patients who experience this acute visual loss involving their important lower visual field.”

The second element which needs to be explained is the regular involvement of the lower visual field at outset. There is an anastomotic link between the medial and lateral short posterior ciliary arteries encircling the posterior ONH [4], and the upper anastomosis may appear less proficient than the lower one so that with a drop of perfusion pressure the upper anastomosis will be the watershed area and its occlusion will lead to loss of the lower field. Furthermore, as the visual loss frequently develops on the patient assuming the erect posture hydrostatic pressure may be an additional causative factor.

The management of patients with NA-AION is not easy in elderly patients who experience this acute visual loss involving their important lower visual field, especially when there is no proven effective treatment other than control of any underlying systemic medical problem. It is important in the presence of hypertension to keep the blood pressure up in the evenings and lowering the intraocular pressure (IOP) may also help to improve perfusion in the optic nerve circulation; thus one might consider the use of Brimonidine tartrate eye drops, which have neuroprotective and IOP lowering actions. This would seem a logical measure to consider and at least in the circumstances the ophthalmologist will be prescribing some treatment. It is also important to emphasise to the patient that recurrence of the condition is uncommon.