The Tecnis Eyhance IOL (Johnson & Johnson Vision), model ICB00, is a next-generation monofocal IOL that extends the depth of focus, improving vision for intermediate tasks while providing similar distance vision to that of a standard aspheric monofocal IOL (Figure 1) [1]. Data show a low incidence of halo, glare or starburst comparable to that reported with the Tecnis 1-piece IOL. 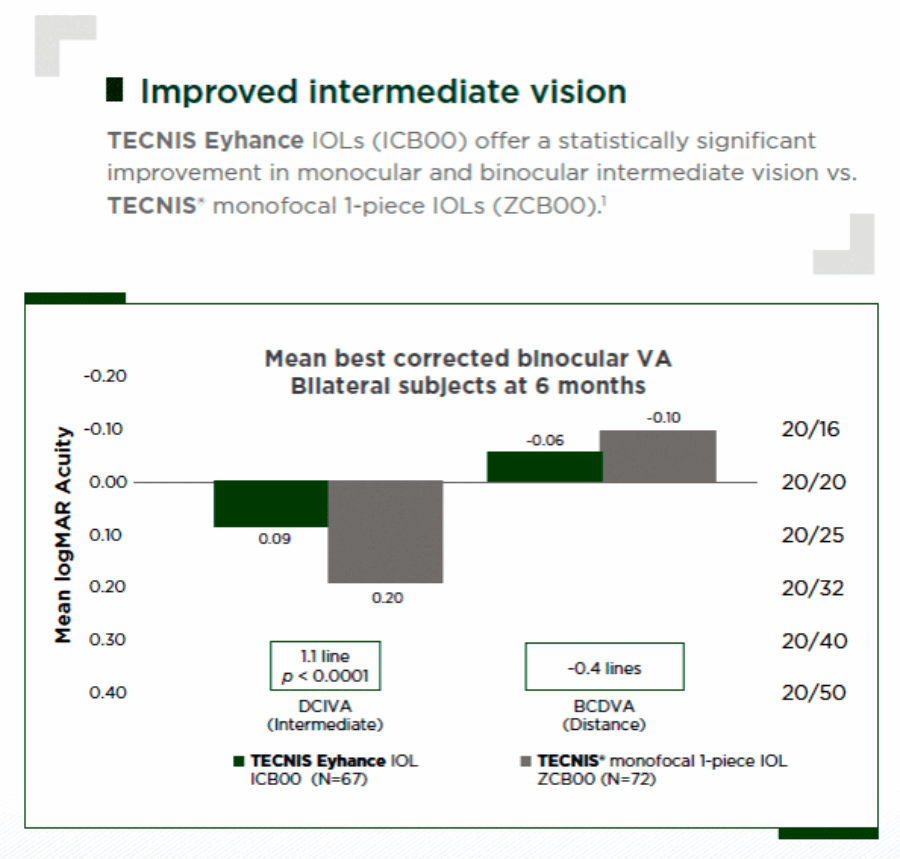 “One of the major problems with monofocal IOLs is that we do not always hit the refractive target despite meticulous biometry and power calculation,” explained Dr Findl. “The Tecnis Eyhance IOL provides a two-fold surgical benefit with respect to refractive outcomes. Due to its geometry and optics, this IOL has a larger landing zone and is therefore more forgiving, providing the patient with very good uncorrected visual acuity even if the outcome is a little off from emmetropia. Secondly, if you do achieve emmetropia, then the patient will have good intermediate vision, an additional benefit not seen with most current monofocal lenses.

“Preliminary impressions of visual performance from my own case experience implanting the Tecnis Eyhance IOL is that uncorrected visual acuity is better than that typically associated with other monofocal IOLs and that patients experience good intermediate vision when emmetropia is achieved.”

ASPIRA-aXA (HumanOptics) is a monofocal IOL combining a 7.0mm optic with cut-out haptic design for added stabilisation for reliable refractive results. The enlarged XL optic allows for an extended view of the fundus, represents a promising approach to minimise dysphotopsia and is a particularly suitable treatment option for large pupils.

Multifocal IOLs can improve vision at all distances, with a high percentage of spectacle independence

Compared with standard monofocal IOLs, multifocal IOLs offer the benefit of improved vision at all distances and correct the symptoms of presbyopia after cataract surgery, increasing the likelihood of spectacle independence. Trifocal IOLs produce good visual acuity at all distances and consistently better intermediate vision than bifocal IOLs. Trade-offs with multifocality include night vision problems and an increase in glare, halos and / or starbursts in comparison with standard IOLs.

A Cochrane systematic review concluded that multifocal IOLs are effective at improving near vision relative to monofocal IOLs, adding that there was uncertainty as to the size of the effect [3]. Distance acuity achieved with multifocal lenses was similar to that achieved with monofocal lenses. The authors observed that ‘motivation to achieve spectacle independence is likely to be the deciding factor’ in considering whether the improvement in near vision outweighs the adverse effects of multifocal IOLs.

A 12-month multicentre study demonstrated that patients (n=145) implanted with AcrySof IQ PanOptix trifocal IOL showed visual acuity of 20/25 or better in both corrected and uncorrected conditions across near, intermediate and distance visions [4]. A prospective, multicentre, randomised post-market clinical study evaluated the visual performance of AcrySof IQ PanOptix and the AT LISA tri 839MP presbyopia correcting IOL following bilateral implantations in 180 patients. Results showed that both IOLs improved visual acuity while the AcrySof IQ PanOptix group had better uncorrected near (40cm) and intermediate (60cm) vision at six months compared with the AT LISA tri IOL group (Figure 2 and Figure 3) [5]. 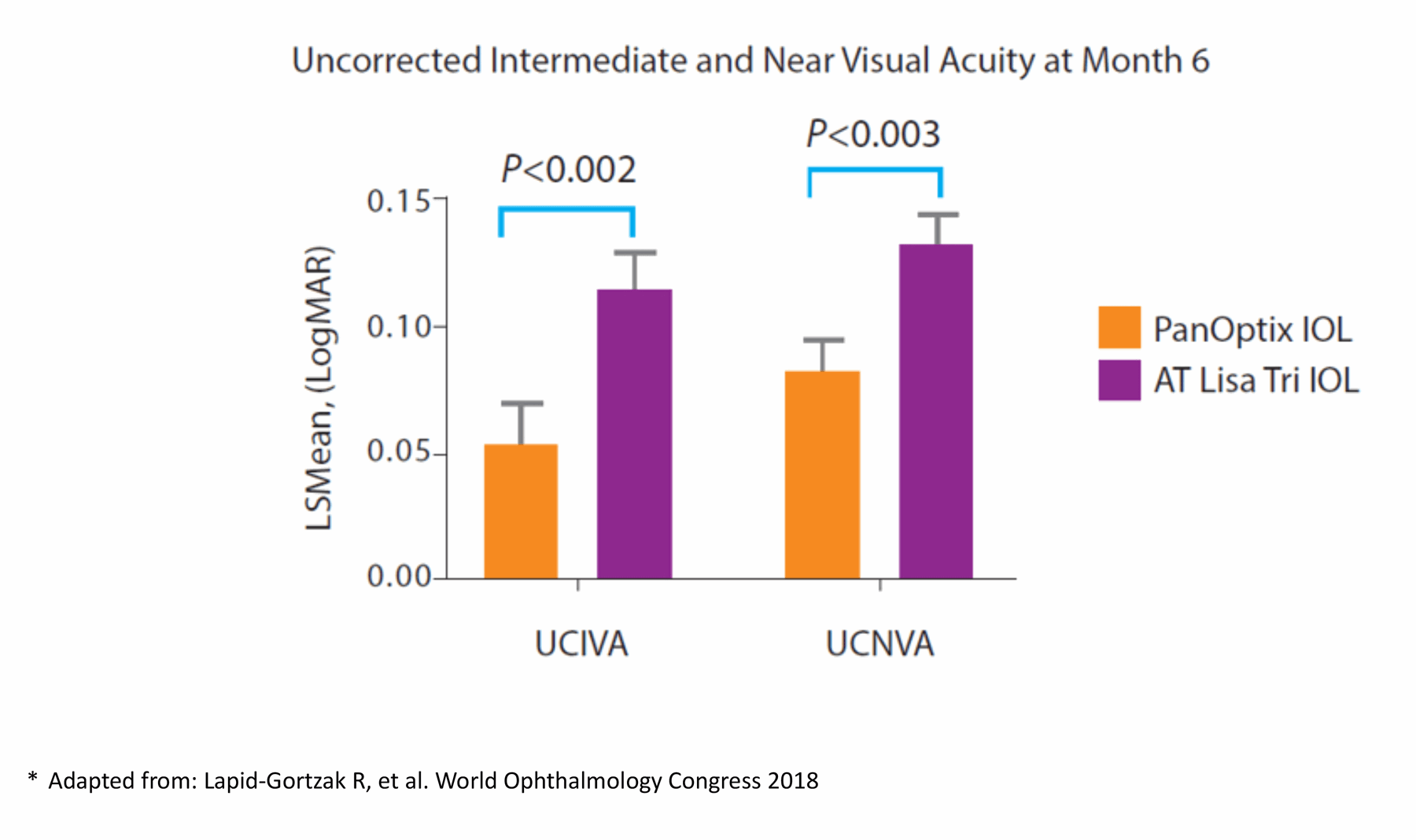 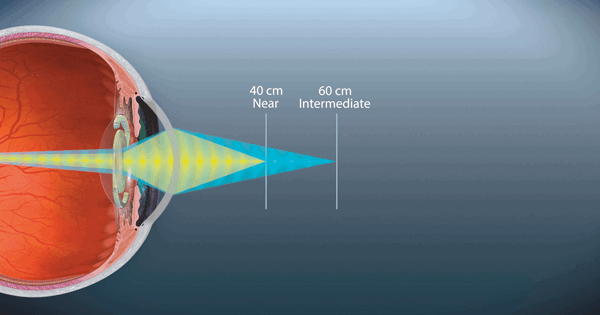 Brief description of lens design and features: Aberration neutral, acrylic IOL with a Continuous Transitional Focus (CTF) optic designed for the correction of presbyopia. Hybrid hydrophobic and hydrophilic monomers. The transitional zones of the CTF optic offer a full range of vision from near to infinity with a smooth continuous transition.

Brief description of lens design and features: Bioanalogic IOL, incorporating a design and material developed to resemble the properties of the natural crystalline lens. Designed to deliver premium visual acuity at all distances, with 9mm optics minimising dysphotopsias.
WIOL-CF is suitable for any patient with cataract or presbyopia who expects excellent far to intermediate visual acuity and keep or restore near vision for reading newspapers, books or electronic media and can eventually accept correction by spectacles for very fine near vision.

Brief description of lens design and features: A progressive extended depth of focus aspheric IOL, with three optical concentric zones and a continuum of foci.

A range of EDOF IOLs utilising various approaches for correction of presbyopia are available, several detailed in Table 1. The underlying technology is based on utilising an optical design that provides for reduced near addition of the IOL while maintaining a continuous range of functional vision across intermediate and near distances [8].

Studies show that EDOF lenses may provide satisfactory near and intermediate vision with reduced incidence of optical phenomena often experienced by patients implanted with multifocal lenses [9].

A study involving 57 patients found that EDOF IOL Mini Well (SIFI) performed similarly to a distance-dominant diffractive multifocal IOL (ReSTOR SV25T, Alcon) at distance and near but was associated with better visual acuity at intermediate distances [10].

A retrospective cohort study comparing Tecnis Symfony EDOF IOL targeted at micro-monovision to a monofocal IOL targeted at binocular emmetropia (176 eyes of 88 participants) found that the EDOF IOL demonstrated superior range of visual acuity and spectacle independence compared with the monofocal IOL [11]. At postoperative review (5+ months), 93% of the EDOF IOL group reported spectacle independence at near distance compared with 33% of the monofocal group. Extended depth of focus IOL ZEISS AT LARA is based on a diffractive optical platform (Figure 4). 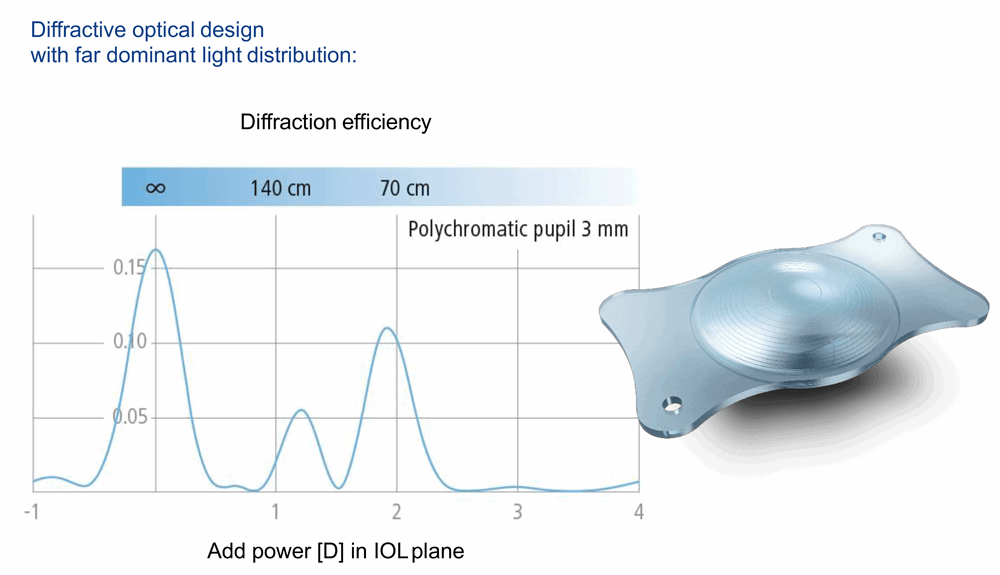 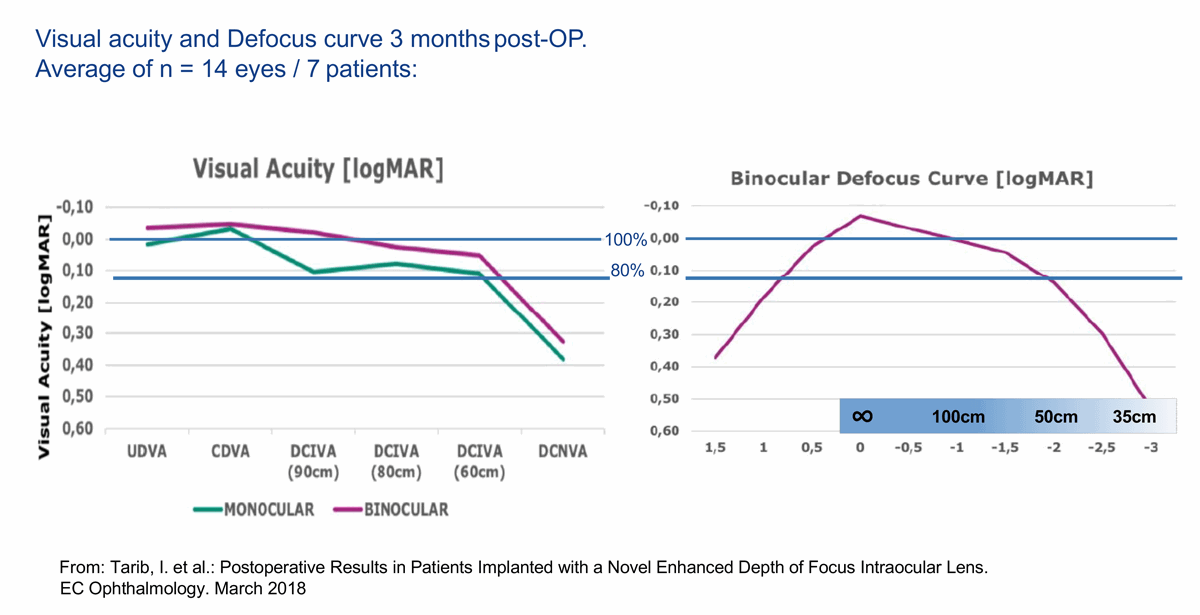 The IC-8 small aperture IOL (Acufocus) extends depth of focus by combining small aperture optics with an aspheric monofocal lens, and is designed to deliver a natural range of vision with greater spectacle independence for presbyopic and cataract patients [13]. Studies have shown that the IC-8 delivers reliable extended depth of focus with high levels of patient satisfaction [14]. 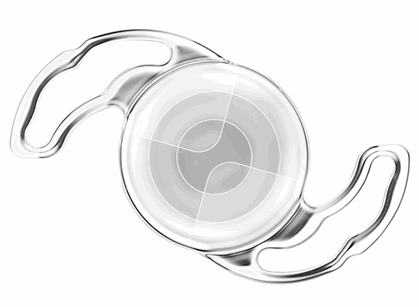 Precizon Presbyopic and Precizon Presbyopic Natural Visual Acuity (NVA) are two new acrylic IOLs from Ophtec for the correction of presbyopia, providing alternatives to regular multifocal IOLs (Figure 6). These IOLs incorporate an aberration-neutral continuous transitional focus (CTF) optical design, with an anterior surface having multiple segments for far and near and designed for ‘natural’ vision at all distances while reducing unwanted glare and halos [15]. Continuous transitional focus lenses can provide focus within the entire depth of field, which means that the image more closely mimics the visual experience of the natural lens [15]. The lens is designed to be pupil independent and to allow patients to enjoy better vision at different distances.

Newer toric IOLs for cataract surgery are available that effectively reduce levels of postoperative astigmatism and with reducing levels of spectacle dependence compared with non-toric lenses.

Kessel et al. previously demonstrated the superiority of toric IOLs compared with monofocal IOLs with or without corneal relaxing incisions, although patients randomised to toric IOL implantation had to undergo significantly more secondary surgical procedures because of IOL rotation and retinal tears [16]. Evidence from numerous randomised controlled trials (RCTs) demonstrate better uncorrected distance visual acuity, lower levels of postoperative astigmatism and less spectacle dependence for distance viewing in people that received a toric IOL than those implanted with a non-toric IOL, with or without limbal relaxing incisions.

A majority of cataract patients with significant corneal astigmatism undergoing toric IOL implantation can be expected to achieve reduced cylindrical correction and improved unaided visual acuity (UVA), although patients should be counselled about the risk of lens rotation, according to findings from an evaluation of real world refractive outcomes in a UK NHS setting [17].

In this study of 32 eyes of 24 patients who received a toric IOL implant (Tecnis Toric, AcrySof Toric or Rayner T-flex) over a 10-month period at Oxford Eye Hospital, postoperative UVA was superior to preoperative best corrected visual acuity (BCVA) in 81% of eyes, unchanged in 16% and inferior in 3%, with a median improvement of 0.20 logMAR. Previous vitrectomy was identified as a common risk factor in two thirds of cases of significant IOL rotation.

At three years’ post-cataract surgery, the overall incidence proportion of Nd:YAG capsulotomy was 6.4%. For the different cohorts implanted with AcrySof, non-AcrySof hydrophobic and non-AcrySof hydrophilic IOLs, the incidence proportions of Nd:YAG capsulotomy at three years following cataract surgery were 2.4%, 4.4% and 10.9%, respectively [18]. The same trend was observed in single-piece IOLs only.

Principal investigator and lead author Mr Paul Ursell, Epsom & St Helier University Hospitals NHS Trust, Epsom, UK, explained: “There is no doubt from the evidence collated from multicentre clinical practice in the NHS that choice of IOL material for lens implantation during cataract surgery has an overriding effect on the subsequent odds of undergoing an Nd:YAG capsulotomy procedure. The study found that implantation with non-AcrySof hydrophilic acrylic IOLs was associated with an almost fivefold increased odds of undergoing Nd:YAG capsulotomy at three years after cataract surgery compared with hydrophobic AcrySof IOLs.”

“Particularly in the case of premium IOLs, patients may have high expectations with respect to refractive outcomes after the lens is implanted,” added Dr Findl. “We know also that patients implanted with multifocal IOLs are more likely to undergo IOL exchange than those receiving monofocal implants. It is important therefore to ensure that patients have realistic expectations before surgery and in my opinion, surgeons are encouraged to follow the motto ‘underpromise and overdeliver’.”