The management of neovascular age-related macular degeneration (nAMD) has advanced dramatically over the past seven years, with the introduction of targeted new therapies that successfully maintain or improve vision in a majority of affected individuals.

Inhibitors of vascular endothelial growth factor (VEGF) now represent standard of therapy for multiple malignancies in several tumour types. There has also been a dramatic benefit in intraocular neovascular diseases, such as exudative or wet AMD, following treatment with ophthalmic anti-VEGF therapies ranibizumab, aflibercept and unlicensed intravitreal bevacizumab. Indeed, nAMD may no longer be the leading cause of blindness in people over the age of 50 years where access to ophthalmic VEGF inhibitors is available.

The European Society of Retina Specialists (EURETINA) has prepared fresh guidance for the management of nAMD. Prof Ursula Schmidt-Erfurth, from Austria, outlined principal recommendations from the planned guidance in a scientific session presentation during the 13th EURETINA congress in Hamburg, Germany, 26th September, 2013.

Most patients with nAMD who are treated with intravitreal anti-VEGF therapy are successfully controlled. Study data show a 50% reduction in the incidence of AMD-associated legal blindness in Denmark from 52.2 to 25.7 per 100,000 in people aged 50 years or older over the 10 years to 2010, with a marked and sustained decline from 2006, coinciding with the EU marketing authorisation of intravitreal ranibizumab [1]. Incidence of legal blindness attributed to other causes decreased by 33%, most of the decline occurring between 2000 and 2006.

Despite clear benefit, studies of real-world clinical practice suggest undertreatment and undermonitoring of nAMD. In an observational study involving 551 patients followed by 16 ophthalmologists, 12 months of intravitreal ranibizumab treatment induced an overall mean visual acuity gain of 3.2±14.8 letters, with 19.6% gaining more than three lines of vision [2]. Less than 40% of patients received the recommended loading dose of three initial monthly injections. Only 4.4% of patients had regular follow-up and none were monitored monthly as stipulated in the guidelines. The average visit number was 8.6, with an average injection rate of 5.1. Poor compliance with treatment recommendations was reflected in mediocre outcomes, noted Lumiere study authors.

While highly effective, anti-VEGF therapy for nAMD requires repeated re-treatment activity in a life-long strategy. The aim of the updated EURETINA guidance is to provide efficient, practical and economic recommendations for managing nAMD, including diagnosis and therapy, applicable for the entire population and all subgroups, at all times and locations. Anti-VEGF therapy is the first-line therapy in neovascular AMD, notes EURETINA guidance. The following subsections summarise headline opinion and evidence regarding specific anti-VEGF treatments, as well as recommendations on diagnosis and follow-up [3].

Bevacizumab
The best results using unlicensed intravitreal bevacizumab are obtained with a fixed monthly treatment regimen. There is a slight decline in visual acuity gains with PRN dosing, while monthly monitoring is mandatory. Evaluation of secondary endpoints, including absence of fluid on OCT and change in lesion size over 24 months, significantly favoured ranibizumab therapy and a monthly regimen. For equal results, more bevacizumab injections are needed.

Aflibercept
Pivotal phase III clinical studies demonstrate that, by 52 weeks, the efficacy and safety of aflibercept 2mg every eight weeks (2q8, after three monthly loading doses) was comparable to that of ranibizumab 0.5mg every four weeks. Non-inferiority of aflibercept compared to ranibizumab for prevention of moderate vision loss was established. Treatment with intravitreal aflibercept was found to be well tolerated across all dose groups through week 96. Following 52 weeks’ proactive treatment, efficacy was largely maintained for the remainder of the study using a modified quarterly retreatment schedule. The data suggest that, after one year of aflibercept therapy, it may be possible to extend the treatment intervals based on patients’ individual visual and anatomic outcomes. That said, continuous dosing may provide the best vision outcomes.

Results of the pivotal VIEW studies show that, at 96 weeks, aflibercept and ranibizumab were equally effective in improving BCVA and preventing BCVA loss [4]. The 2q8 aflibercept group was similar to the ranibizumab-treated group in visual acuity outcomes during 96 weeks, but with an average of five fewer injections overall.

Efficacy and durability differ slightly
All intravitreal anti-VEGF substances (ranibizumab, bevacizumab, aflibercept) are efficient in the treatment of nAMD. Efficacy and durability differ slightly, noted Prof Schmidt-Erfurth. This was summed up in a concise but controversial appraisal: aflibercept > ranibizumab > bevacizumab. That said, it was observed that, with a bi-monthly dosing strategy, these modest differences are ‘irrelevant’. There is a slight loss in benefit with PRN approaches; all PRN strategies reduce visual gain, despite monthly monitoring. Morphologic biomarkers help to indicate prognosis and management needs. Timing is crucial and treat-and-extend approaches represent an approximation only. Geographic atrophy was seen in 28% of nAMD patients treated on a monthly basis.

A multicentre cohort study (SEVEN-UP) assessed seven-year outcomes in 65 ranibizumab-treated patients originally enrolled in the phase III clinical trials ANCHOR and MARINA and the open-label extension trial HORIZON [5]. Approximately seven years (mean 7.3 years) after trial entry, 37% of study eyes met the primary endpoint of 20/70 or better BCVA. Compared with baseline, almost half (43%) of eyes were stable, whereas one third declined by 15 letters or more. These findings indicate that even following long-term anti-VEGF treatment, nAMD patients are still at risk for substantial visual decline.

While a fixed monthly dosing and monitoring regimen of ranibizumab has shown to provide good visual acuity (VA) gains, results from different clinical trials demonstrate that monthly monitoring and individualised dosing can produce similar VA results with lesser dosing. A post-hoc sub-analysis of the EXCITE study suggests that early visual response to ranibizumab therapy may predict future treatment requirements [6]. This analysis categorised patients based on VA response after three months of treatment, to determine if early response to ranibizumab will be able to predict any differences in month 12 treatment outcomes in patients receiving monthly versus quarterly dosing.

Irrespective of subsequent monthly or quarterly dosing of ranibizumab, patients from categories one and three maintained the initial VA gain achieved at month three. However, in the overall study population, the proportion of patients with no worse than a four letter reduction was larger in the monthly dosage group (77%) compared with the quarterly dosage group (65%; p=0.034). In patients who gained ≥15 letters at month three, there was little difference that suggested additional benefit of monthly dosing over the quarterly dosing with respect to the 12 month VA outcome. Early VA losers, however, showed better VA stabilisation with continued monthly dosing, indicating that such patients may require more intensive follow-up and retreatment whilst on ranibizumab treatment than those who demonstrated good initial VA response. 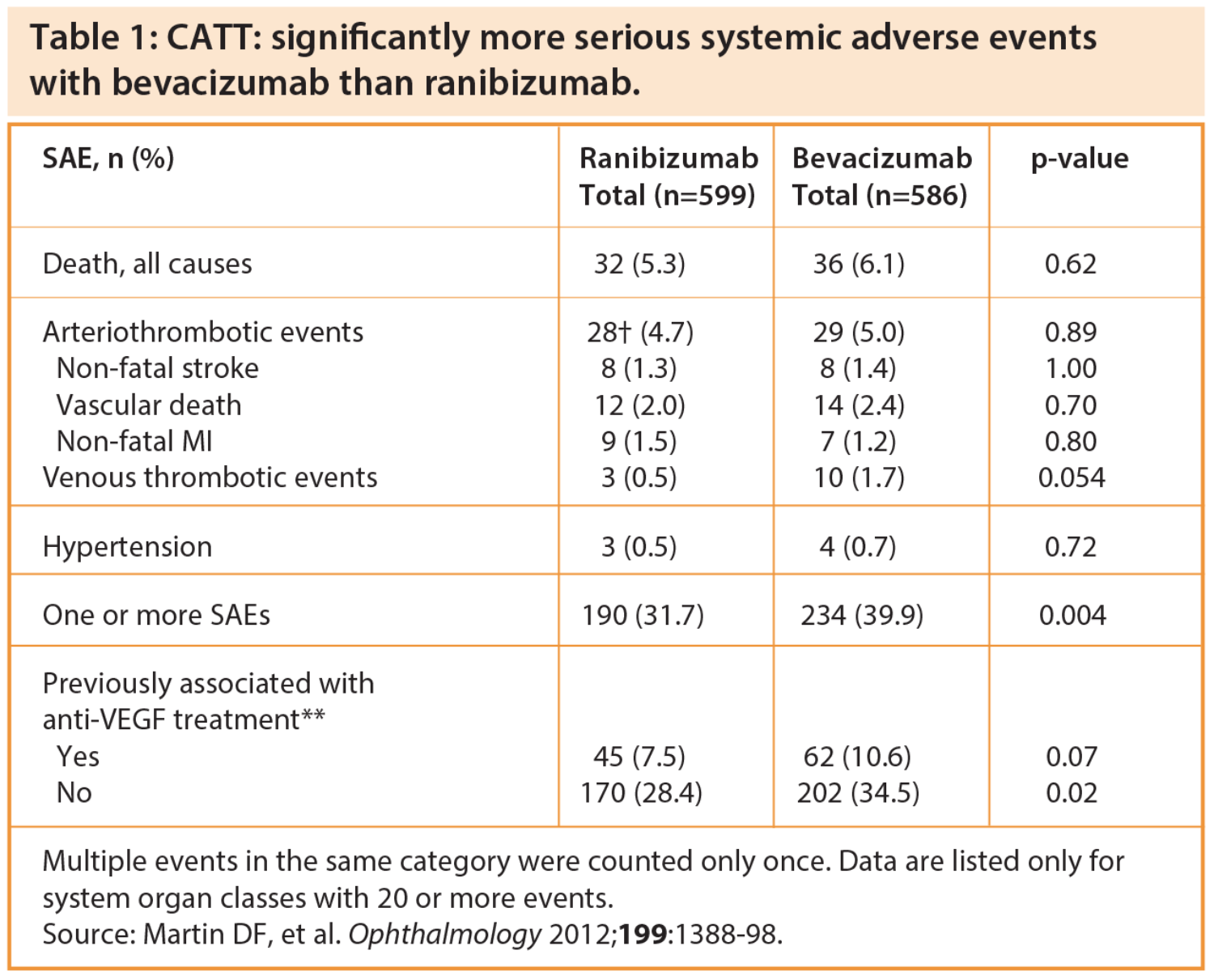 The Comparison of Age-related Macular Degeneration Treatments Trial (CATT) highlighted significantly more serious systemic adverse events with bevacizumab than ranibizumab in nAMD patients (Table 1). Based on these data, noted Prof Schmidt-Erfurth, for every 12 patients treated with bevacizumab instead of ranibizumab, one patient would experience a serious systemic adverse event (number needed to harm = 12.2 [95% CI, 7.3-36.3]). There have also been geographic reporting clusters of severe ocular adverse events associated with intravitreal bevacizumab treatment.

Patients with AMD may be at increased higher risk of certain systemic adverse events such as stroke or arterial thromboembolic events (ATEs). Trials evaluating ranibizumab in the treatment of AMD suggest a possibility of increased stroke risk with intravitreal anti-VEGF treatment, particularly in patients with a history of stroke. Anti-VEGF compounds bevacizumab and aflibercept contain Fc (fragment crystallisable) portions and are associated with increased systemic exposure compared to ranibizumab. Intravitreal bevacizumab is associated with significant reductions in plasma VEGF levels. Additional studies involving large patient populations and extended follow-up are necessary to better assess serious but infrequent adverse events such as stroke or endophthalmitis.

A pooled safety analysis of more than 4,000 patients with nAMD, drawn from clinical practice registries in Germany, the Netherlands, Belgium and Sweden, found that ranibizumab has a low rate of events related to the potential (systemic) effects of VEGF inhibitors or the injection procedure [7]. The most frequent overall ocular events of particular interest were retinal pigment epithelial tears (27 patients; <1%) and intraocular pressure-related events (12 patients; <0.3%). There was a low annual incidence of stroke across all registries (0.0-0.5%).

Through two years, there was no difference between bevacizumab and ranibizumab in rates of death, myocardial infarction or stroke (APTC events), noted Daniel F Martin, CATT Study chair, in a keynote lecture at the 2013 Retina Day meeting ahead of the Royal College of Ophthalmologists’ annual congress in Liverpool.

Imaging assessment using fluorescein angiography (FA) is mandatory for the primary diagnosis of neovascular AMD, when not contraindicated. It is also advisable in cases of unexplained vision loss or no morphologic response. Fluorescein angiography is also useful to help exclude retinal angiomatous proliferation (RAP) and polypoidal choroidal vasculopathy (PCV) lesions. Indocyanine green angiography (ICGA) helps in diagnosing RAP and in documenting the stage of the neovascularisation process; it reveals the focal area of intense hyperfluorescence within the retina, arising from the deep capillary plexus forming the initial angiomatous lesion, which later on will form anastomosis with the choroidal circulation [9].

Mokwa and colleagues compared colour fundus photography, FA and SD-OCT for the detection of AMD, CNV and CNV activity in a study involving 120 eyes of 66 AMD and control patients (Table 2) [8]. Investigators found that CNV lesions and activity may be missed by photography alone, but is of use in identifying drusen and pigmentary changes. SD-OCT was found to be highly sensitive for the detection of AMD, CNV and CNV activity, but cannot fully replace FA in the management of patients with CNV. Fluorescein angiography presented high sensitivity and specificity as a diagnostic tool for AMD and CNV if compared to SD-OCT. Both FA and SD-OCT revealed equal sensitivity to detect CNV activity, while colour fundus photography was high specific but non sensitive (Table 2). 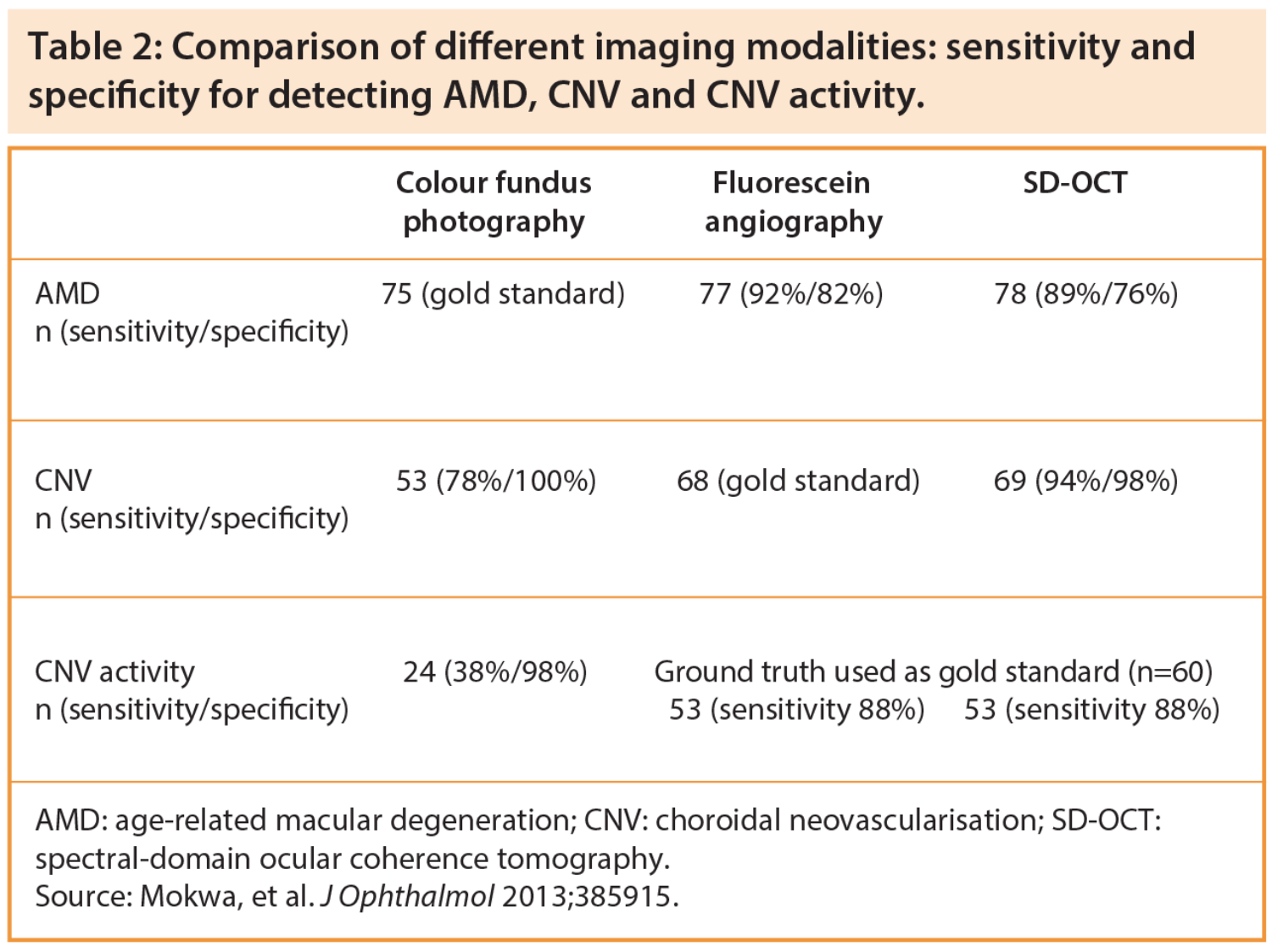 In another study involving treatment-naïve eyes with nAMD, investigators found that atrophy of the outer retina is an important correlate for lower visual acuity in nAMD [10]. Quantitative analysis of SD-OCT retinal parameters revealed correlations between visual acuity and retinal and subretinal morphological changes in nAMD. Decreased VA after one year correlated with decreased volume of the photoreceptor layer (R=0.4, p<0.05). In the SEVEN-UP study, evaluating seven-year outcomes in ranibizumab-treated patients, macular atrophy was detected by fundus autofluorescence in 98% of eyes, with a mean area of 9.4mm2, and the area of atrophy correlated significantly with poor visual outcome (p<0.0001). 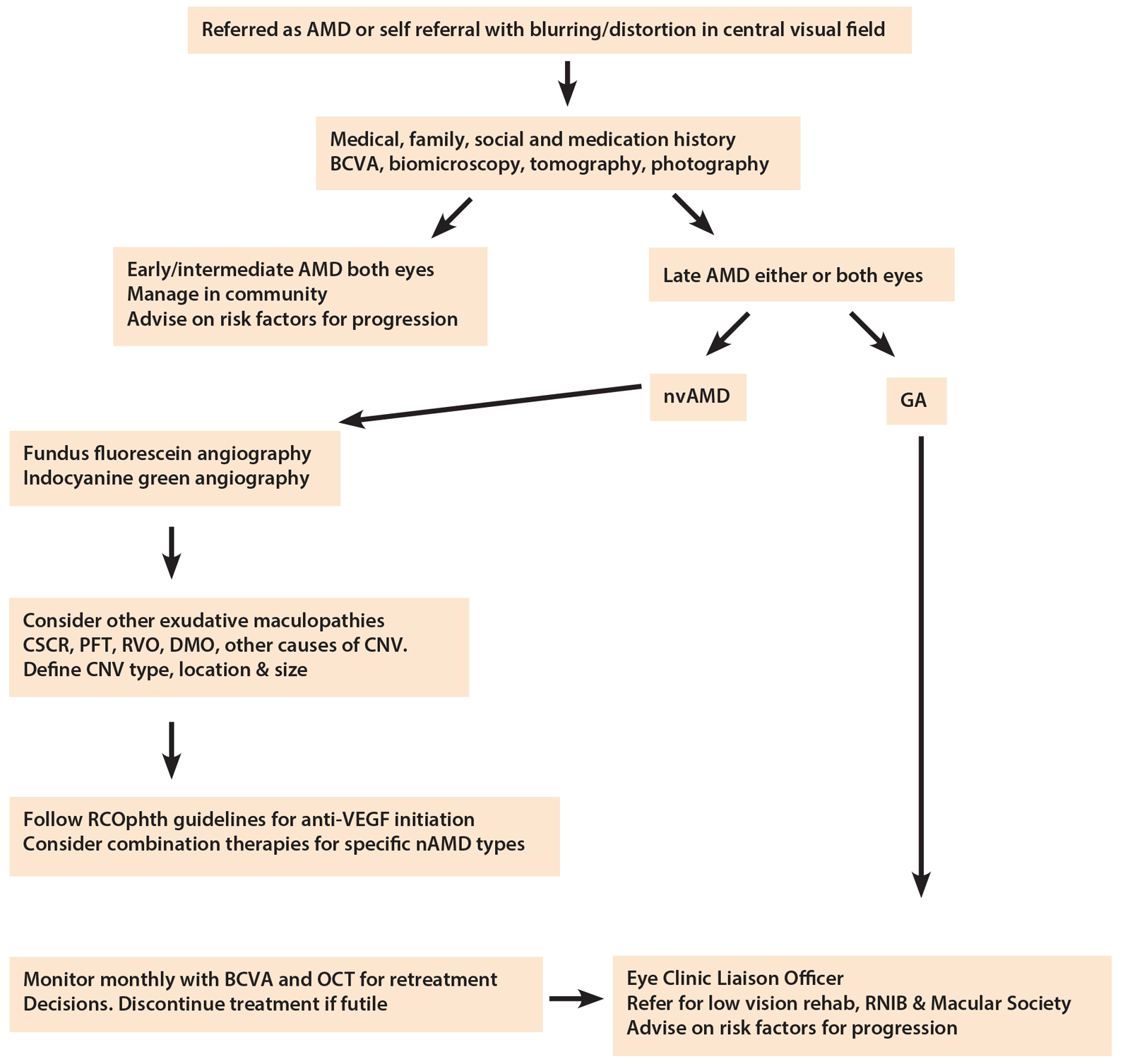 New guidelines on treatment delivery in the UK’s NHS

The Royal College of Ophthalmologists also issued in September 2013 updated guidelines for the management of age-related macular degeneration, intended to set the standards of best practice in the UK’s National Health Service and in the private sector (Figure 1) [11]. These include practical ABC recommendations on diagnosis, treatment and treatment delivery for neovascular AMD, outlined below:

a) Baseline investigations to ensure a definitive diagnosis of CNV should include BCVA, FFA and OCT:

b) The treatment aim is the improvement or stabilisation of visual symptoms; the treatment recommendations should be guided by patient characteristics, type of lesion and logistics:

c) To ensure maximum benefit, treatment must be undertaken without delay and preferably within two weeks of initial development of symptoms or detection of a treatable lesion:

The role of VEGF is well-established in pathologic vascularisation, including ocular neovascularisation. However, chronic VEGF neutralisation may lead to unanticipated side-effects and anti-VEGF therapies should thus be administered with caution.

Emerging new therapies under investigation as treatments for nAMD include mRNA or tyrosine kinase receptor inhibitors, as well as complement and integrin inhibitors. New modes of drug delivery, including sustained release solutions, are also under clinical evaluation. Experts comment that strategies to stop retinal pigment epithelium (RPE) loss appear to be as important in nAMD as in geographic atrophy.