A 65-year-old man presented with a week’s history of binocular diplopia (in all directions of gaze) and a right partial ptosis. He was systemically well. His past medical history was unremarkable except for vitiligo.

At presentation acuity was 6/6 bilaterally. He had an exotropia (corrected by 25 dioptres base in prism) with a slight right hypotropia. There was a right-sided partial ptosis (lid margin almost to the visual axis) associated with reduced levator function. Pupil reflexes and examination of the globe itself was normal. Ocular movements were abnormal with reduction of right adduction, elevation and depression. Right abduction appeared to be spared, suggesting normal function of lateral rectus. 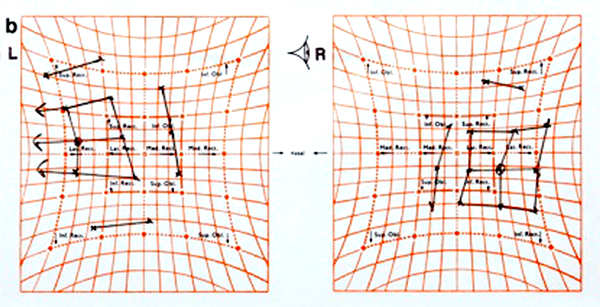 Figure 1: Hess Chart demonstrating under-action of the right ocular muscles with reduced adduction, elevation and depression. Right abduction appears spared. Note the centre of the box in the right eye is shifted outwards temporally and depressed, highlighting the right exotropia and hypotropia.

The patient was reviewed two weeks later and new findings were noted. He had a left partial ptosis (the right ptosis had almost recovered) and his diplopia had altered, being worse at the end of the day. Levator function was poor; however, there was no Cogan’s lid twitch and no fatigue after one minute of up-gaze. He denied any systemic symptoms. Acetylcholine receptor antibodies were positive and a diagnosis of ocular myasthenia was made. A computed tomography (CT) thorax excluded a thymoma. Treatment included corticosteroids and acetylcholine esterase inhibitors and within one week the ptosis had resolved with full ocular movements.

Myasthenia has previously been reported to mimic ocular cranial nerve palsies [1]. Myasthenia can mimic the ocular movement disorder seen in a third nerve palsy [2], and this case report highlights that this can be documented on a Hess chart to fit with a typical third nerve palsy, and furthermore, be associated with a simultaneous ptosis which gives a very convincing but false impression of a third nerve palsy.

Since myasthenia is rare it is unsurprising that it is still under diagnosed in the UK, especially in the elderly [3]. This case emphasises the need to always consider myasthenia in cases of apparent third nerve palsy (once life threatening aneurysms have been excluded). The history of other autoimmune disease is consistent with myasthenia in this case. If diagnosed early the prognosis is excellent, and the risk of progression from ocular to generalised myasthenia and mortality are low.

The authors would like to thank the patient for allowing the publication of their story.