My COVID-19 songs
By Anna Maino 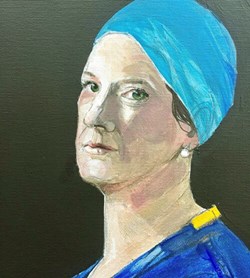 A portrait of Anna by Tamara Jovandic-Everson as part of #portraitsforNHSheroes.

I am a consultant eye surgeon and these are my COVID songs.

First of all, I have not even had time to digest the past six months, partly because I have been lucky. I have not been as frontline as many heroic colleagues and I am lucky to be alive.

I am a strabismologist – it’s a cerebral type of surgery which attracts geeky types who think in algorhithms. I loved the comfort of numbers and calculation. I loved being able to make a massive difference to someone very quickly. I am ridiculously lucky to have found my ikigai (my reason of being): I do something that I love, that I am good at, that earns me a living and that makes a difference to society (https://www.forbes.com/sites/chrismyers/2018/02/23/how-to-find-your-ikigai-and-transform-your-outlook-on-life-and-business/#56d42e982ed4).

The highlight of my week were my two surgical sessions. As I changed into scrubs, I assumed a different identity. As I washed my hands, I washed away all my worries. The whole process was almost ritualistic and full of symbols – it is called a ‘theatre’ and it became my show. I shared the stage with Ken, who is a consultant anaesthetist and a massive music fan. He is the one who chooses the music. Actually, that is not correct – he is the one who reads me like a book and chooses the best music for the day.

Nobody knew how life would have changed by the end of February. I am sure BBC 6 Music played:

around that time. I liked the song, but it was not life-changing, just a pleasant background shimmy to my operating. I chose this song to visualise the quotidianity, the calm before the storm.
Then it all changed. The virus became real. I saw a lot of confusion and mixed messages. The first reaction was fear, fear, fear and the most scared were actually those at the top. And when you don’t know what it going on and your leaders don’t show any true leadership, it goes all awry. 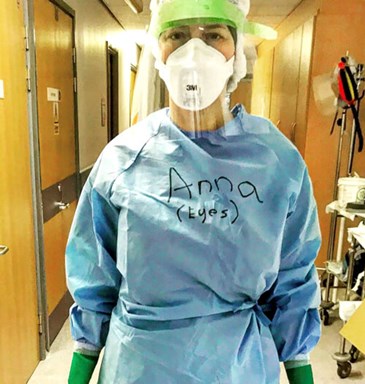 I have been through a few challenges in my life, and I have always been powered by music.

Songs resurface in my head, sometimes from the past, sometimes songs I have heard that morning on the radio – usually with a fairly obvious message.

I am sure you have heard all about the PPE scandal, and how healthcare professionals and care workers had very little PPE at first. We had to find / buy our own kit. We were not persuaded that Public Health England guidelines were based on science.

In the midst of all this, you have two types of people: the heroes and the villains. My excellent trainee was severely reprimanded by a manager for wearing scrubs while moving between two areas of the hospital. To this day, it makes me angry that she had nothing better to do than pick on someone, while herself going home at 2pm. That is the problem of the NHS – very rarely the bosses are on the frontline.

All my life I have had people telling me what to do / think / say. I am still a rebellious teenager at heart so I’d let it all out with:

I was scared. I was angry, I was told to go and help out in medical wards even though I had not used a stethoscope for over 20 years. I am sure you have seen some funny memes on WhatsApp along the lines “stay at home, unless you want to be intubated by an ophthalmologist”. Well, that was real. I spent hours and hours reading up, practising, doing online modules and trying to be as prepared as I could. I could have kept a low profile, as it was not compulsory to go to the wards. But by doing so, I would have behaved in the same way as that manager. I wanted to give the juniors and the nurses a clear message: your lives matter. Your lives matter to me. Your lives are just as important as mine.

One day in April, I was driving to work. I was still scared and angry. I was not in a happy place. And then, this song came on:

As I drove, I pondered that I had gratefully received weekly claps, free food and other kind gestures from the public but I did not want to be a hero. I wanted to do the job I trained for. I did not want to be idolised, as the public opinion is fickle and it would not be long before right-wing tabloids would spin their narrative.

‘Runaway’ has a tempo that stabilises your breath. When the strings came in, I could not hold back the tears. I had to pull over and I just cried for 10 minutes solid. My destiny was sealed – I would not run.

So it began. I did just over two weeks, because after that I was asked to return to ophthalmology to be first on call again. During those long residential shifts, I had to find a way to use my time productively so I brought with me my guitar and I practised. My teacher massively overestimated my abilities assigning to me:

And even if it was not a conscious choice, it captured the mood of those days. 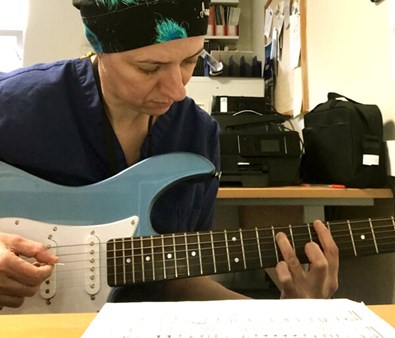 So where are we now?

As I write, the numbers are low-ish. Everyone is bracing themselves for a second spike in winter and a Greater Manchester lockdown is looming.

Ophthalmology is the specialty with the greatest number of outpatient appointments so I literally had no time to process what was happening, I was given a list of hundreds of patients to triage and contact over the phone and told to get on with it. I have been asked to redesign my clinics, while there are no plans in place for surgery. Urgent, sight-saving surgery never stopped but squint surgery is not that urgent so I am feeling like a broken puppet. It is six months and counting that I have lost my reason for being.

My last song is:

I have been through dark times before, and I can tap into significant powers of regeneration. I will rise again, even though, right now, I feel purposeless. 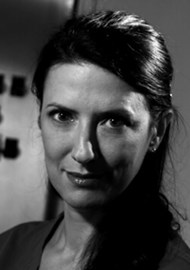 Consultant Eye Surgeon with a special interest in strabismus and paediatric ophthalmology.