Age-related macular degeneration (AMD) is the leading cause of blindness in the developed world. Primarily associated with ageing, genetic factors and lifestyle choices such as smoking also play a contributory role. Patients with early AMD, characterised by the development of small- and medium-sized drusen or retinal pigment epithelial abnormalities, and those with intermediate AMD, characterised by medium and large drusen and / or geographic atrophy not involving the centre of the fovea, are often asymptomatic.

It is usually the two forms of late AMD; geographic atrophy involving the fovea and neovascular AMD, that are most strongly associated with symptomatic vision changes. These symptoms consist of a reduction or loss of central vision with or without distortion which commonly manifests as a difficulty in reading or recognising faces. In recent times, the management of wet or neovascular AMD has been revolutionised with the introduction of intravitreal injections of anti-vascular endothelial growth factor (anti-VEGF) such as ranibizumab (Lucentis) or bevacizumab (Avastin) and more recently aflibercept (Eylea), resulting in the delayed progression of visual loss if not improvement of vision. Although the processes in non-neovascular AMD are not fully understood, a number of different treatments are being investigated which either act to prevent the loss of photoreceptors and retinal pigment epithelial cells (e.g. visual cycle inhibitors) or to suppress inflammation (e.g. complement inhibitors).

The Age Related Eye Disease Study (AREDS) has demonstrated beneficial effects in terms of reducing the risk of progression with oral supplementation of antioxidant vitamins and minerals in those with intermediate AMD and those with late AMD in one eye. Assuming that any future therapies will be more effective if administered early in the disease process, it becomes all the more important to possess a test that is sensitive to the earliest changes in AMD, while at the same time displaying good repeatability in order to better monitor its progression.

Why the need for a new visual acuity test?

The conventional test of visual function in AMD is high contrast visual acuity (VA) measurement. Traditionally this was done using the Snellen chart, which consists of rows of black-on-white high-contrast letters with an unequal number of letters on each line and an unequal change in letter size between lines. As more treatments became available for AMD, the necessity of being able to accurately detect and monitor for a change in visual function became more significant and testing using charts employing a Logarithm of Minimum Angle of Resolution (logMAR) design has become a requirement.

The Early Treatment Diabetic Retinopathy Study (ETDRS) chart using single letter scoring is considered to be the current gold standard. Every row is comprised of five letters, sized and spaced such that each letter contributes a score of 0.02 log units. A logMAR visual acuity score of 0.00 means that the eye can resolve detail that subtends 1/60 degrees of visual angle (i.e. one minute of arc), equivalent in size to a 6/6 letter on the Snellen scale. Visual acuity of 1.00 logMAR indicates that the eye is resolving detail subtending 10 minutes of arc, equivalent in size to a 6/60 letter (Figure 1). 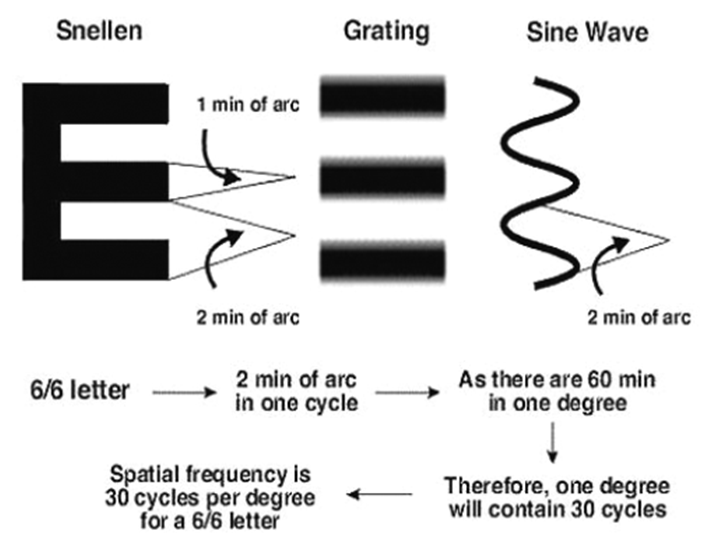 The problem with measuring visual function using these charts in AMD is that VA often remains normal, even in advanced disease until the fovea is observably affected. Conventional letters are ideal as targets to measure errors of refraction since they are particularly vulnerable to the effects of spurious resolution caused by optical defocus as a result of phase reversals within their rich spatial frequency spectra, resulting in the letter quickly becoming harder to resolve with decreasing angular size. However, these letters appear to be much less sensitive in indicating visual loss as a result of neural processes in early and intermediate AMD with studies reporting a decrease in VA of only two or fewer letters in patients displaying early AMD lesions. It seems that only a weak relationship exists between the severity of retinal changes and VA, influenced by the location and extent of the lesion in addition to the pathology stage.

Traditional VA tests provide an indication of the highest spatial frequency that can be resolved by the visual system at high contrast. Other tests of visual function in AMD have been investigated including reading speed, photostress recovery, foveal flicker sensitivity and microperimetry. Low contrast VA measurements can also provide additional information by reporting the highest spatial frequency that can be resolved at low contrast. These tests, however, have demonstrated poor repeatability, possibly owing to the acute angle at which a stimulus modulating in spatial frequency strikes the contrast sensitivity function in the low contrast part of the curve. It is important to be able to assess visual function that is specifically sensitive to the neural changes in AMD whilst also displaying good repeatability. Additionally, the test must be easily understood by patients and be simply and quickly administrable in routine clinical settings.

In an attempt to investigate and address this problem, our team at Moorfields has designed a pseudo high-pass letter VA chart which is more sensitive to the early signs of AMD. Addressing a high priority for research as identified by the 2013 Sight Loss and Vision Priority Setting Partnership, the project was funded by Fight for Sight and the Special Trustees of Moorfields Eye Hospital NHS Foundation Trust. The results have been published in the British Journal of Ophthalmology [1].

What is the difference between the new chart and existing ones?

Howland et al. [2] described letter stimuli in which large inter-letter legibility differences are effectively overcome by removing the low spatial frequencies. These high-pass filtered letters, each made up of a black core and white surround are presented on a grey background, the luminance of which is equivalent to the mean luminance of the letter. As the letter reduces in size to the threshold acuity level, the high spatial frequencies beyond the resolution limit of the retina are filtered by the optics of the eye.

The result is that under foveal viewing conditions, the detection and recognition thresholds coincide such that when a letter can no longer be recognised, it cannot be detected either, hence their alternative name as vanishing optotypes. Conventional letters do not behave in the same way since their luminance difference to the background results in separate values for the detection and recognition thresholds. Under peripheral viewing conditions, however, the two thresholds for vanishing optotypes also separate and previous studies have confirmed that resolution of these stimuli is determined by neural sampling density rather than optics [3,4].

Employing these stimuli instead of conventional black-on-white stimuli in a VA test may allow for better sensitivity to the neural changes associated with AMD. Furthermore, initial studies with these letters demonstrated that VA measured with these letters displayed lower variability [5,6] whilst also demonstrating a greater robustness to the effects of optical defocus in normal subjects [7]. In order to investigate their usefulness in a clinical acuity test several preliminary studies of the five-year project led to the eventual design of the Moorfields Acuity Chart (MAC). This chart is based on the gold standard layout of the ETDRS chart with five letters per line in 0.10 logMAR steps, but replacing the conventional letter design with the high-pass filtered letters (Figure 2). 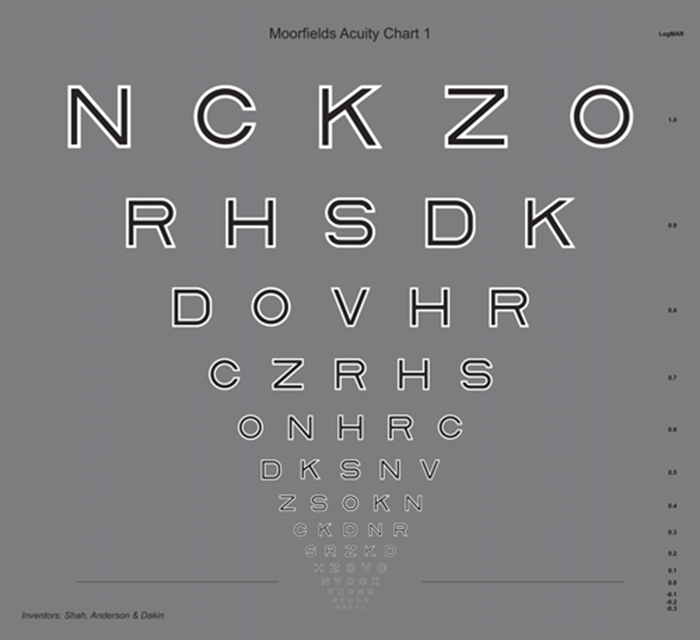 VA measurements were compared for 38 normal subjects and 80 patients with a range of VA owing to AMD. The mean VA was measured to be 0.00 logMAR (range -0.12 to 0.26 logMAR) and 0.45 logMAR (range -0.02 to 1.20 logMAR) for the normal subjects and AMD patients respectively. Each participant underwent baseline refraction at 4m and ocular examination to exclude any other significant pathology. VA measurements were then taken on two different conventional black-on-white logMAR charts (C1 and C2) and two different MAC charts (MAC 1 and MAC 2). Bland-Altman statistics and linear regression were used to analyse the data. The difference in VA measurements attained between the two different chart types gives an indication of the bias. The difference in VA measurements between the same chart types gives an indication as to the repeatability of the measurement with that chart type with test-retest variability (TRV) expressed as the 95% limits of agreement.

“With the projected number of people with AMD worldwide predicted to be 196 million by 2020 and with an increasing number of treatments becoming available, the ability to detect AMD earlier is absolutely vital.”

What the results suggest

Unsurprisingly, conventional letter chart measurements gave ‘better’ VA scores than the MAC chart in normal subjects since the low spatial frequency information remains available for letter identification. This difference was around 1.5 lines. However, for AMD participants with good VA levels similar to those of normal subjects, the ‘deficit’ in MAC chart VA was considerably larger, with a mean difference between the two chart types (C1 and MAC 1) of approximately 4.5 lines. For AMD subjects at the poorer acuity end, the difference was approximately 2.5 lines. This suggests that the MAC chart is able to detect functional loss owing to AMD at levels where conventional acuity remains relatively unaffected, particularly in its earlier stages. However, whilst the MAC may result in a stronger disease signal, this is of little value if it is lost in the test variability. TRV was found to be similar for both charts in both the normal and AMD groups, ranging from +/-0.09 to +/-0.12 logMAR.

Why should the MAC display higher sensitivity to visual loss in AMD?

Simulations suggest that, as photoreceptors ‘drop out’ as AMD develops, resolution of the high-pass filtered letters on the MAC chart suffers more from the effects of neural under-sampling than it does for conventional letters. For conventional letters, a larger proportion of photoreceptors must become dysfunctional before the loss causes resolution to fail compared to vanishing optotypes in AMD. As the fovea becomes more involved, recognition of both charts suffers in a more equal fashion, explaining why the difference in acuity loss between the two charts becomes smaller. In other words, with conventional letters which contain a range of spatial frequencies, the visual system is able to shift to using the lower spatial frequencies and these are more robust to undersampling. With the MAC chart, acuity is affected sooner with undersampling since the only available higher spatial frequencies can no longer be resolved and the letter quickly becomes unidentifiable.

With the projected number of people with AMD worldwide predicted to be 196 million by 2020 [8] and with an increasing number of treatments becoming available, the ability to detect AMD earlier is absolutely vital. Whilst other tests of visual function in AMD exist, high contrast VA measurements remain the only internationally accepted endpoint for clinical trials. Results with the MAC test thus far suggest that it may be an effective tool with which to achieve this, whilst also being simple to administer routinely in a clinic environment and easily understood by patients. The chart is produced commercially under licence by Peter Allen and Associates and we are preparing for a larger clinical trial in AMD patients in order to be able to build up a normative database of VA results with the MAC chart at different stages of the AMD disease process. Whilst the MAC chart will not replace the normal chart for refraction, its seeming sensitivity to neural damage means that a patient’s comparative results between the conventional and MAC charts may yield invaluable insights and could become a commonly used tool in detecting and monitoring AMD. These results will also be very important and potentially translational to other disease processes such as diabetic retinopathy and further studies will be needed to investigate this. A recent exploratory study incorporating these vanishing optotypes in a letter recognition task in perimetry testing suggests these may also be able to offer a suitable patient friendly test to obtain a sampling-limited measure of ganglion cell density in glaucoma patients.

Declaration of competing interests:
The authors are co-inventors of the Moorfields Acuity Chart, which is produced commercially by Peter Allen Associates. 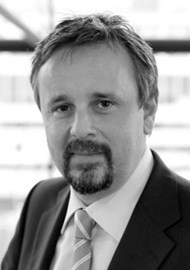 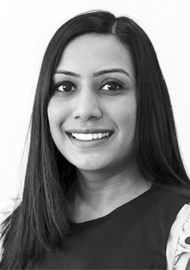