There is continuing debate on the merits of pan-retinal photocoagulation (PRP) for severe pre-proliferative and proliferative DR versus the newer therapies that inhibit vascular endothelial growth factor (VEGF). This has been hotly debated [1] following the publication of findings from DRCR.net’s Protocol S. This showed that visual acuity in eyes treated with the anti-VEGF drug ranibizumab was non-inferior to PRP at two years and some 48% of eyes in the anti-VEGF arm improved by ≥2 steps in DR severity, which was double that observed in the laser arm.

These arguments for the benefits of pharmacotherapy which potentially avoid the destructive effects of pan-retinal laser have now been extended to steroid therapy.

Three different steroid drugs have been evaluated in patients with diabetic macular oedema (DMO), in which severe pre-proliferative DR also existed, and so it is possible to examine their protective effects. The first steroid, triamcinolone (TA), has been used in two DRCR.net trials [2,3]. The first trial [2] had three arms: macular laser versus TA 1mg versus TA 4mg. At 36 months, the TA 4mg arm slowed (P=0.02) the progression from NPDR to PDR compared with laser (30% versus 37%, respectively). An effect that was not seen in the TA 1mg arm (P=0.73). The second TA trial [3] assessed DR severity score (DRSS) worsening in patients with PDR. A benefit was shown at three years in patients treated with TA and laser versus laser alone (P<0.001; 12% versus 40%, respectively), but was not observed in patients without baseline PDR. An observation that the authors attributed to the extraction of the cataract during the follow-up period. The 0.7mg dexamethasone implant (Ozurdex) has also been studied and in the MEAD trials in DMO patients (European Medical Agency: Ozurdex European Public Assessment Report. EMA/ 492068 2014) no significant effect (either two or three-step changes in DRSS or two-step progression of DR) was observed versus sham control.

The fluocinolone actonide (0.2µg/d FAc) implant has also been tested in DMO patients in the FAME trial [4] with 16.7% of chronic DMO patients experiencing a two-step improvement in DRSS in the 0.2µg/d FAc implant group versus 8.3% in the sham group (P=0.042). The FAME study also showed the time to first PDR event (presented as the cumulative probability of progression to PDR in Table 1) was significantly greater in sham control treated patients than the 0.2µg/d FAc implant treated patients and was consistently observed irrespective of whether patients were classified as chronic DMO or not.

Further analyses of the FAME trial compared the progression to PDR, taking into account the baseline DRSS level and retinal capillary non-perfusion (baseline characteristics are shown in Figure 1). Sixty percent of which were found to have NPDR and the majority (40.2%) had a DRSS level between 47 and 53 (moderately severe and severe NPDR DR, respectively) and represent the most at-risk population for progression to PDR (DRSS level ≥60) [5]. Analysis shows that at month 36 significantly more patients (P=0.002) had progressed to PDR in the sham arm than in the 0.2µg/d FAc arm (35% versus 18%, respectively). Similar analysis was used to determine the impact of capillary perfusion and non-perfusion as in the FAME trial 36% of patients had capillary non-perfusion at baseline (Figure 1). Results showed that the number of patients progressing to PDR was significantly higher in the sham control group than the 0.2µg/d FAc group and that the difference between the treatment and sham control was greatest in the subgroup with capillary non perfusion at baseline (51% versus 29%) (Table 1). 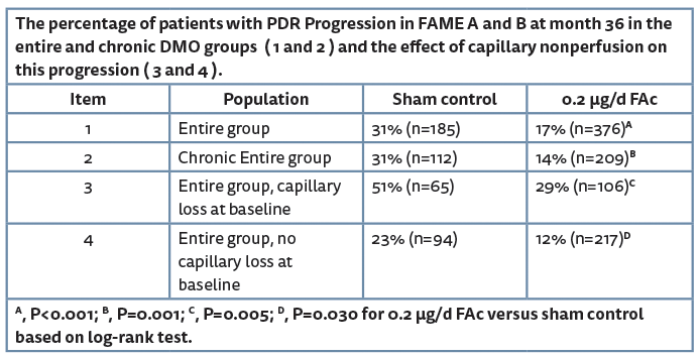 The continuous, long-term steroid exposure over 36 months resulting from ILUVIEN during the FAME trials provided a unique opportunity to address the clinical question of the impact of corticosteroids on progression of PDR. The FAME data set consisted of eyes with vision loss due to DMO and which had a mean of 1.3 injections of 0.2μg/d FAc over three years. Significant reduction in progression of PDR from 31% to 14% was seen in the overall group as well as the subgroup of patients with chronic DMO and was similar in effect size to that observed in the RIDE and RISE studies which used monthly injections of ranibizumab [6]. In the FAME trials these secondary analyses also found statistically significant reductions in the proportion of eyes progressing to PDR among eyes with moderately severe or severe NPDR (DRSS levels of 47 and 53) and eyes with retinal capillary non-perfusion.

The persistent disease modifying effects on DR seen with ILUVIEN are likely linked to the continuous release of the corticosteroid fluocinolone acetonide over three years. The magnitude of the treatment effect is similar to that seen with monthly injections of anti-VEGF therapy. The importance of continuous therapy to maintain disease modification of DR has been highlighted in the recently published open label extension from the RIDE/RISE clinical trials, where the percent of patients that maintain two-step improvement in DR reduced from 46.0% to 27.2% with the 0.3mg dose and 44.4% to 35.6% with the 0.5mg dose, when patients were transitioned from a monthly injection regimen to a PRN regimen with a mean of 3.8 injections per year [7]. Pharmacotherapy treatments for DR have made significant advancements over the last decade with respect to treatment options for DMO. Now, pharmacotherapeutic options are advancing to slow progression and even reverse the effects of DR. The analysis presented here highlights the importance of continuous therapy to maintain disease modification achieved with pharmacotherapeutic interventions and the value of corticosteroid treatment as an important option for the treatment of DR and DMO.

This article is based on the author’s presentation at the Retina Sub-Speciality Day, 23 May 2016 at the ICC, Birmingham, UK. 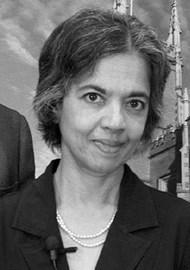