As COVID-19 rips through the country, it is – of course – imperative that we stay at home to try and prevent the virus spreading through the whole community.

We are all aware of the need to take special care of those who are vulnerable, but one section of the population appears to have been forgotten – or, more likely, not even recognised. These are the people in the UK of all ages – children too – who are living with over 60% of sight loss and the vivid, silent, visual hallucinations which make up Charles Bonnet Syndrome (CBS). The sight loss can have occurred from any one of the eye diseases, stroke, cancer, accident, diabetes or another condition which has damaged the optic nerve.

Stress, isolation and fever are known to exacerbate the episodes of CBS. Over the last few weeks, I have spoken to and received emails from people who – up to now – were coping admirably with their condition, but the added stress of the current situation and the extra isolation have caused an upsurge in the number and frequency of hallucinations with which they live. Some people have reported a change in what they see. CBS hallucinations can range from disturbing to terrifying and it seems that more frightening images are appearing or images of words, patterns, maps and musical notes, which cover everything. Fear and frustration are creating a further downturn in quality of life.

We know that what is seen depends on which part of the brain is firing at that moment but why the brain choses to produce a particular image at a particular time is a question I am asked time and again but, as yet, have no answer.

Living with CBS causes stress and loneliness by itself but now – particularly for people who are self-isolating alone, with no chance of company – this is a vicious circle.

I was interviewed last week by a radio journalist in Denver, USA. He lives with CBS and told me that his hallucinations had ‘gone berserk’ in the short time that the USA has been in lockdown. He had found my website, but the USA is far behind us, with no awareness campaign and no research. I direct all calls and emails from across the pond to a psychologist in Louisville, Kentucky, who works exclusively with the visually impaired. His name is Gary Cusick and his contact details are on my website under the USA flag. He is a lone voice.

Support in the UK can be found via my Helpline, which is still being answered for me by the Eye Health Team at the RNIB – 020 7391 3299 – and if the caller would like to speak to me, I am always happy to return the call. If someone who lives with CBS is preferred, the caller can be referred to Retina UK’s CBS Buddy Scheme. The Macular Society runs a group telephone counselling service for people who live with CBS. For this particular group, people with any eye condition (not just macular) can join. The number is 0300 3030111.

Other information and coping strategies which I have gathered from people with live with CBS are available from my website – www.charlesbonnetsyndrome.uk – or by email to me on esmesumbrella@gmail.com

Several people have contacted me to say that eating ginger is helping to alleviate their hallucinations. It would be worth a try.

I know that all the Eye Clinic Liaison Officers and Rehabilitation Officers for the Visually Impaired are well aware of CBS and will support patients who are still attending eye clinics. However, when I contacted all the local and national low vision charities to ask them to check on their members with CBS, I discovered that there is concern among them that making such calls would be deemed as ‘cold calling’.

This is not so. The Information Commissioner’s Office has made it clear that, during the crisis, the data protection laws have been relaxed. This is the link: https://ico.org.uk/for-organisations/data-protection-and-coronavirus/

I suspect that one of the problems is linked to GDPR, because the regulations about keeping data mean that it is not always possible to retain the information on the IT system. Consequently, these charities may not have a list of people who live with CBS. It would be excellent if the ICO could take a look at that particular regulation and remove it permanently.

In March of this year, we marked the 300th birthday of Charles Bonnet and I had hoped to announce the new pieces of research for which I have sourced funding. This was not to be but, once we are through this crisis, I will be doing just that and, by then, we should also have the results of the research which has been carried out by Kat da Silva Morgan – under the direction of Dr Dominic ffytche (King’s London and my medical adviser) – at Newcastle University.

We will be announcing the recipient of the small grant award funded by Esme’s Umbrella and Blind Veterans and another award funded by Fight for Sight and the Welsh Government.

Already underway is the survey of paediatric ophthalmology clinics to establish the prevalence of CBS in children. This has been funded by Thomas Pocklington Trust and is led by Dr Mariya Moosajee, Consultant Ophthalmologist at Moorfields and Great Ormond Street Hospitals.

The Medical Detection Dogs – so much in the news at the moment because of the COVID 19 detection work they will be doing – has also begun some CBS research for Esme’s Umbrella. This will be to identify the change in the body of someone just before a CBS episode occurs. It has been discovered that, at least, two guide dogs are warning their owners to prepare for an hallucination. If we can establish what the dogs are detecting and feed that information into the other research, who knows what we might find.

In the meantime, I would urge all healthcare professionals – many of whom are working in different areas of the NHS at the moment – and all those who answer the support helplines, to be aware of CBS and how the current crisis is affecting those who live with the condition. For them it is a true nightmare. 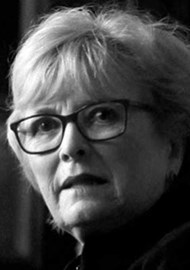