Could the sclera be key to glaucoma?
By Craig Boote

The glaucomas are a group of conditions characterised by optic neuropathy and associated visual field defects. Of these, chronic open-angle glaucoma (COAG) – diagnosed on the basis of progressive structural changes to the optic nerve head (ONH) and nerve fibre layer (NFL) – is the most prevalent and the second leading cause of blindness worldwide. COAG currently affects an estimated 65 million people globally, and this is predicted to double over the next three decades.

In 2003 it was estimated that the annual economic burden of COAG to the UK alone was £38 billion – the bulk of this being attributed to indirect, non-treatment costs. While this figure understandably received much media attention at the time (http://news.bbc.co.uk/1/hi/health/3113019.stm), it likely underestimated the true societal burden given evidence that, in some ethnic groups, as many as one half of COAG sufferers may go undiagnosed [1].

Although the pathophysiology of COAG is still not fully understood, fluctuations in intraocular pressure (IOP) appear centrally important in triggering the degeneration of retinal ganglion cells (RGCs) that ultimately results in irreversible loss of vision. However, while elevated IOP is a major risk factor [2], glaucomatous vision loss can occur across a wide range of pressures. Indeed, 20-50% of diagnosed COAG patients typically have IOP in the normal range [3] while, conversely, not all individuals with elevated IOP go on to develop glaucoma. In short, there appears to be no ‘safe’ level of eye pressure when it comes to evaluating COAG risk and progression for a given patient.

“Alongside its evident involvement in COAG pathogenesis, the sclera’s accessibility and slow basal ECM turnover rate further mark it an appealing target for therapeutic intervention.”

In 2006 an editorial by Professor Ross Ethier, published in the Canadian Journal of Ophthalmology [4], elegantly crystallised an idea formed out of a recently burgeoning field of research – glaucoma biomechanics. Underpinning the complex ‘biomechanical theory’ of glaucoma, was the relatively simple hypothesis that IOP elevation causes deleterious stretching of the ONH tissues including, crucially, the lamina cribrosa (LC) – the tissue identified 25 years earlier in a landmark paper by Dr Harry Quigley [5] as the primary site of axonal damage. 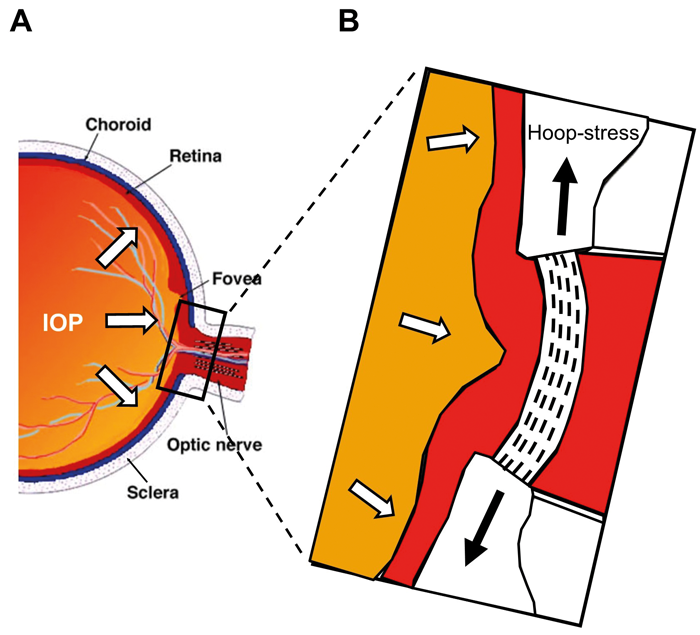 Figure 1: Biomechanical theory of COAG.
A) IOP forces (arrows) are transmitted to the ONH (black rectangle) via the eye-tunic (predominantly the sclera).
B) The resulting scleral ‘hoop-stress’ stretches the lamina cribrosa (broken lines)
– a primary site of glaucomatous axon damage.

At the centre of this idea was recognition that the sclera, by virtue of being much stiffer than the LC to which it is attached, plays the major role in transmitting forces created by IOP fluctuations directly to the ONH, thereby profoundly affecting the resulting deformation of the LC (Figure 1). As the tissues of the ONH are small and difficult to access and visualise, Ethier and others (notably including groups led by Claude Burgoyne and Crawford Downs [6]) relied heavily on finite element modelling, a computational engineering tool that enables prediction of an object’s deformation based on its geometry, material properties and the forces applied to it. Out of such work came the important result published by Sigal et al. [7] which predicted that, among the individual ONH material contributors to LC strain, the sclera is by far the most influential (Figure 2). 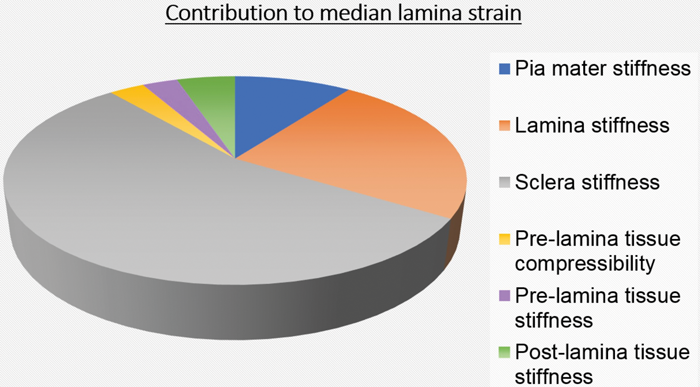 Figure 2: Individual contributions of the ONH tissue components to the IOP-induced
strain experienced by the lamina cribrosa, as predicted by computer modelling.
Note that by far the largest contribution comes from the sclera.
Figure drawn using data taken from Sigal et al. [7].

This finding leant further compelling support to the argument of the sclera having a significant role in the COAG pressure-damage pathway.

About 90% of the sclera’s dry weight is made up of the protein collagen (mostly type I), which forms a fibrous connective tissue stroma interspersed with smaller amounts of other collagens, elastic fibres and proteoglycans. The collagenous extracellular matrix (ECM) is populated by fibroblast cells that control ECM synthesis and degradation. Just as steel cables and girders provide mechanical reinforcement to buildings and bridges, so do collagen fibres determine the directional stiffness of connective tissues in the body, including the sclera.

It is not surprising, then, that the sclera appears mechanically well-adapted to the dynamic internal and external forces experienced by the eyeball, including those exerted by the extraocular muscles and the (continually fluctuating) IOP. Indeed, the sclera is both mechanically and structurally anisotropic. A feature of particular interest is located in the peripapillary region that immediately borders the scleral canal. Here the collagen is strongly oriented in a circular fashion [8], an arrangement which is predicted by numerical modelling to limit the expansion of the canal as IOP is increased [9].

It is conceivable that this may serve a neuroprotective function designed to shield RGC axons from excessive strains as they traverse the LC at the point where they are most vulnerable to pressure-induced damage. Given the influence of anisotropy on scleral and, by extension, ONH biomechanics, it follows that there is potential value in obtaining quantitative measurements of scleral collagen fibre structure with which to produce enhanced, micro-structurally accurate (and thus more clinically-relevant) numerical models. This has, accordingly, been the focus of a series of recent studies.

Pijanka et al. [8] used X-ray scattering to quantitatively map the collagen fibre organisation of the posterior sclera in seven non-COAG and five COAG post-mortem human sclerae, the latter with moderate to severe damage (>25% axon loss). They noted that in non-glaucoma sclerae the anisotropy degree of the peripapillary collagen ring varied markedly between quadrants according to the following pattern: Superior-Temporal > Inferior-Nasal > Inferior-Temporal > Superior-Nasal, and that this pattern was highly conserved across individuals. 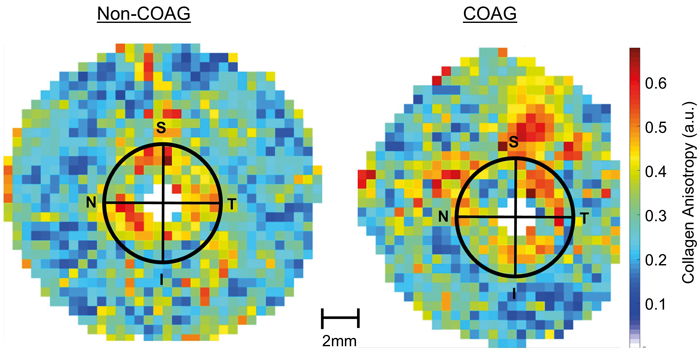 However, the COAG specimens displayed a marked deviation from this pattern (Figure 3) with far more inter-specimen variation. Coudrillier et al. [10] used the X-ray data from the Pijanka paper, combining it with in-vitro inflation / digital image capture, in an inverse finite element modelling study. They used it to examine the effects of collagen fibre structure on the mechanical response of the sclera and ONH in non-glaucoma eyes. The authors showed that, while the majority of the mid-posterior sclera could be described as isotropic without influencing the ONH, altering the regional anisotropic pattern of the peripapillary sclera had a significant influence on the ONH mechanical response – affecting in particular the amount of scleral canal expansion.

In a follow-up study [11], the same team used a similar approach to extract and compare the material properties and microstructure of sclerae from COAG and non-COAG human donors. Sectorial variations in both peripapillary collagen fibre alignment and scleral strain were significantly different in diagnosed glaucoma specimens compared to controls. While these studies and others supported a role for scleral microstructural and biomechanical changes in the pathophysiology of COAG, this kind of cross-sectional research in human samples cannot, of course, easily differentiate between cause and effect, i.e. whether the scleral changes observed in COAG represent some adaptive response to IOP change, or else baseline differences perhaps associated with increased glaucoma damage risk. Efforts to address this question have included recent scleral microstructural studies in animal COAG models. Pijanka et al. [12] used X-ray scattering to study the effect on scleral collagen organisation of bead-induced glaucoma in mice, reporting significant alterations in collagen anisotropy in the peripapillary sclera.

These alterations resembled changes observed earlier in COAG human eyes using the same technique [8] and may reflect pressure-driven dynamic remodelling of the ECM by scleral fibroblasts – an idea purported previously in other studies of animal COAG models, including mice [13] and monkeys [14]. More recently, Boote et al. [15] studied posterior scleral collagen microstructure in a canine glaucoma analogue, noting that collagen density was reduced in the peripapillary sclera of ADAMTS10-mutant dogs before the clinically detectable onset of glaucoma. This, along with findings in other animal models [14], raises the further possibility of baseline scleral properties having the potential to interact with IOP elevations to increase glaucoma damage risk and / or affect the course of disease progression. Despite findings such as these, uncoupling risk and progression in human COAG remains one of the major challenges in glaucoma biomechanics research.

Influence of age, ethnicity and diabetes

While IOP unequivocally has a central role in COAG, delineating the mechanistic pathway of such a complex, multi-factorial disease is inherently difficult. Other major risk factors for COAG include age and ethnicity, and the effect of these on scleral microstructure and biomechanics has also attracted the recent attention of researchers. Coudrillier et al. [16] used microstructure-based, inverse finite element modelling to compare collagen fibre structure and material properties in human sclerae aged between 53 and 91 years. Older age was associated with reduced collagen fibre alignment and mechanical anisotropy in the peripapillary sclera, while matrix stiffness was found to increase with age. In a follow-up paper [17], the same authors documented the effects on scleral stiffness and collagen fibre alignment of diabetes, a condition whose relationship to glaucoma remains disputed.

The study found that the previously reported [16] age-related stiffening of the sclera is accelerated in diabetes, with potential implications for COAG. Age-related scleral stiffening was also demonstrated by Grytz and co-workers [18], in an interesting study which also reported increased stiffness in human donors of African (as compared to European) ancestry. It is possible that this observation may have some bearing on the higher susceptibility of African ethnic groups to COAG. Collectively, these studies show that the influence of the various glaucoma risk factors on the sclera are not mutually independent, and further research is warranted to determine the exact nature of their interaction with respect to COAG progression.

The sclera as a therapeutic target

Alongside its evident involvement in COAG pathogenesis, the sclera’s accessibility and slow basal ECM turnover rate further mark it an appealing target for therapeutic intervention. Altering the mechanical response of the sclera, and thereby ONH, to pressure fluctuations could theoretically benefit glaucoma patients who do not respond well to IOP-reduction alone [19]. One approach considered by researchers has been to stiffen the posterior scleral ECM using collagen crosslinking. Photochemical crosslinking using riboflavin / UVA is already widely used to stiffen the cornea in keratoconus treatment.

However, concerns with retinal cytotoxicity make it problematic to adapt for scleral use. In-vitro stiffening of the sclera has been demonstrated using other, lower-toxicity chemical methods including glyceraldehyde and genepin. However, as noted by Strouthidis and Girard [19], safety concerns remain in terms of the potential of crosslinking to affect scleral permeability, while it has yet to be verified experimentally whether scleral ECM stiffening can actually offer any neuroprotective effect in-vivo. A possible alternative approach could be to target scleral mechanotransduction. Scleral fibroblasts have the potential to impact ocular biomechanics by two routes: (i) a slow, indirect route via their expression of ECM molecules (tissue remodelling), and (ii) a faster, direct route through force-transduction to ECM from intracellular cytoskeletal protein networks.

Human scleral fibroblasts have been shown to be sensitive to their mechanical environment. Applied load alters the expression levels of a multitude of ECM molecules, while increased levels of the contractile myofibroblast cell phenotype have been noted in the sclera of animal eyes with experimental glaucoma and myopia [20]. Further research is needed to ascertain whether these pathways could be targeted to impact tissue-level mechanics as a possible means to treat glaucoma. 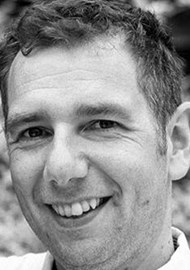