The incidence of Idiopathic intracranial hypertension (IIH) is increasing, likely in line with the worldwide epidemic of obesity. To date, there have been revisions in the terminology used and diagnostic criteria for IIH; these recognise the need to exclude secondary causes of increased intracranial pressure. Recently published randomised controlled trials have investigated effect of weight loss and use of acetazolamide in IIH.

Although various treatment options are currently used, the current Cochrane review highlighted a lack of randomised controlled studies to fully support medical treatment in IIH [1]. Currently in the UK there are trials exploring potential treatments for IIH including bariatric surgery. This ongoing research has the potential to increase our understanding of the aetiology of the disease and improve standards of care for our IIH patients. This article reviews the developments to date and their implication for current clinical practice.

IIH occurs predominantly in women and although the underlying pathogenesis is not fully understood, it has a prominent association with obesity [2]. The condition is well known to ophthalmologists as the majority of patients typically present from their opticians or directly to the eye casualty with headaches and papilloedema (Figures 1A and B). Other symptoms may include blurred vision, visual obscurations, pulsatile tinnitus and double vision: none of which are pathognomonic for IIH [3]. The papilloedema is investigated urgently with neuro-imaging (Figures 1C-F) and lumbar puncture (LP) [4]; where there is raised LP opening pressure and if no underlying cause is found the patient is diagnosed with IIH [5].

“The principles of management of IIH are to treat the underlying disease, protect the vision and reduce the headache morbidity.”

There have been recent developments in terminology used and diagnostic criteria for IIH, these recognise the need to exclude secondary causes of increased intracranial pressure (ICP) and have helped standardise the recruitment to clinical trials in IIH. Using the term ‘benign intracranial hypertension’ (BIH) has been suggested to be inappropriate as although some patients may follow a mild and self-limiting course, for others the morbidity from visual loss and persistent headache is far from benign. The term ‘pseudotumor cerebri’ (PTC) describes the clinical syndrome resulting from elevated ICP but includes those with a secondary cause that are therefore not ‘idiopathic’. IIH is characterised as patients with raised ICP of unknown aetiology fulfilling the criteria set out in the revised modified Dandy criteria [7]. 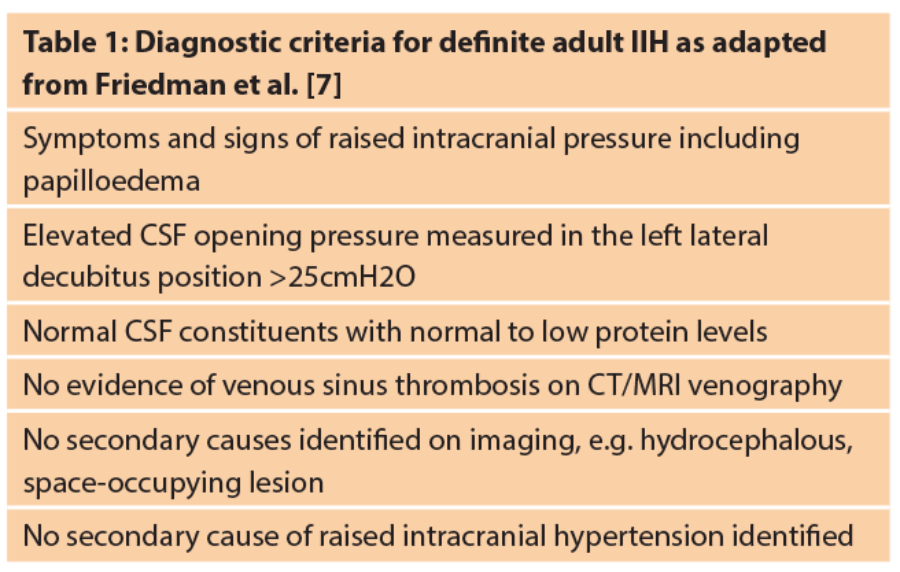 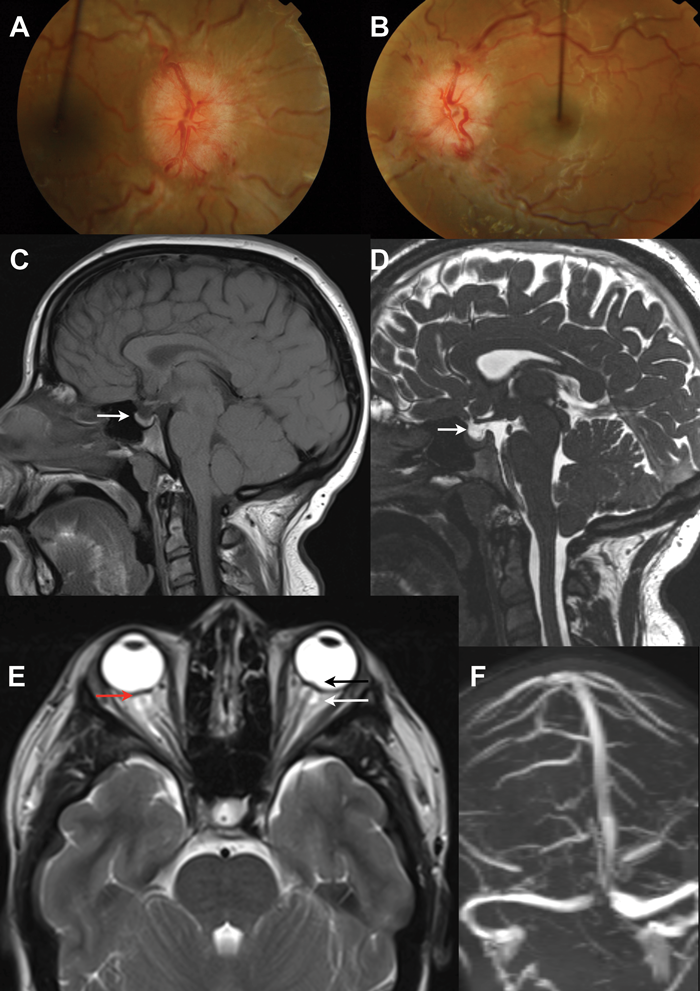 The diagnostic criteria for IIH have evolved but retain the framework of the original criteria proposed by Dandy in 1937, through the modified Dandy criteria, to the updated modified Dandy criteria (Table 1) [7]. These revised criteria emphasise the need to exclude secondary causes of elevated ICP and the need for reliable cerebrospinal fluid (CSF) pressure measurement. An accurate diagnosis of IIH is dependent on neuroimaging that excludes space occupation, hydrocephalus and cerebral venous sinus thrombosis. There are several neuroimaging changes that are associated with raised ICP including empty sella (Figures 1C and D), distension of optic nerve sheaths (Figure 1E, white arrow), vertical tortuosity of the optic nerves and flattening of the posterior globes (1E, red arrow) and protrusion of the optic nerve head (Figure 1E, black arrow), but all of these are non-specific and not diagnostic of IIH.

Evidence for disease modifying therapy in patients with IIH

The principles of management of IIH are to treat the underlying disease through weight management, protect the vision and reduce the headache morbidity. Due to the overwhelming association of IIH with obesity, weight loss is frequently recommended as a treatment for IIH. The first study to use diet to treat IIH was reported in 1975. In this uncontrolled prospective case series, nine patients were treated with a low calorie rice diet (with fluid and sodium restriction); the resultant weight loss (13-38%) was associated with improvement in IIH symptoms and subjective assessments of papilloedema [8]. Subsequently, a landmark study was published in the BMJ in 2010 which reported the disease modifying effects of weight loss in IIH. This two stage prospective cohort study evaluated 25 women with IIH and compared a baseline three month observation period with a three months low calorie diet (425kcal/day).

The study found significant improvement in ICP (mean 8cm CSF) associated with weight loss (mean 15.7kg). Significant reduction in headache impact score was reported along with improvement in papilloedema measures (optic disc elevation and optic nerve sheath diameter with ultrasound and peripapillary retinal thickness with optical coherence tomography); improvements were sustained at three months post diet. This study has established the first evidence that weight loss reduces ICP and was effective in improving headache disability, as well as reducing headache severity, frequency and analgesic use by at least 50% in 50% of patients [9]. Additionally, unlike other symptomatic treatment in IIH (analgesia, acetazolamide, CSF shunting) weight loss is the only treatment to modify the underlying disease process.

Long-term maintenance of weight loss is notoriously difficult and is typically as little as 2-4kg at two years, irrespective of the dietary regime followed [10]. In keeping with this, patients in the IIH weight loss study [9] were noted to regain weight in the year following discontinuation in the study and consequently their symptoms and signs of IIH relapsed, a documented phenomenon in IIH [11]. Consequently, alternative sustainable approaches to weight loss in IIH are likely to offer patients an effective, potentially curative treatment.

Recent evidence for symptomatic treatment in patients with IIH

The current Cochrane review on IIH management reported on the use of acetazolamide, a carbonic anhydrase inhibitor, in IIH [1]. To summarise, two trials were commented on:

Role of the cerebral venous sinuses in IIH

All patients with papilloedema should be investigated with MR or CT venography to exclude cerebral venous sinus thrombosis (Figure 1F). Improvements in venography imaging studies now detail that many, if not all, with IIH have anatomical abnormalities of the cerebral venous sinus system. These include stenosis of the dominant or transverse sinus. What is not fully known is whether the stenosis result from intrinsic dural sinus anatomy or extrinsic compression by the increased intracranial pressure. Importantly, reducing ICP can lead to resolution of stenosis in most. The degree of stenosis does not appear to uniformly correlate with ICP or visual loss [17]. Neurovascular stenting has been reported, in a number of series, to lead to an improvement in symptoms and signs of intracranial hypertension.

Complications of the procedure include a short-lived ipslateral headache in many, stent-adjacent stenosis that require retreatment in a third, and in rare cases vessel perforation leading to acute subdural haematoma, stent migration and thrombosis. The majority of patients who undergo neurovascular stenting require long-term antithrombotic therapy, typically for a minimum of six months following neurovascular stenting treatment. Due to the controversy in this therapy the role of neurovascular stenting in IIH is not yet established and there is, however, a current controlled clinical trial recruiting in the United States [ClinicalTrials.gov Identifier NCT01407809].

Where to next with IIH?

The patient charity IIHUK is active and engaging with patients and clinicians. It has a useful website to signpost patients and families to, and runs meetings throughout the year in all parts of the UK (www.iih.org.uk). IIHUK is currently funding the James Lind Alliance (JLA) Priority Setting Partnership (PSP) for Adult IIH. JLA PSPs enable clinicians, patients and carers to work together to identify and prioritise uncertainties about the diagnosis and effects of treatments that could be answered by research. The JLA PSP for IIH is currently active and we would invite ALL ophthalmologists of ALL grades to contribute at http://www.iih.org.uk/index.php?
option=com_content&view=article&id=88

This was a Medical Research Council funded, phase 2 RCT based in Birmingham assessing the therapeutic efficacy and safety of an 11β-hydroxysteroid dehydrogenase type 1 inhibitor (AZD4017) to reduce ICP and treat IIH. The main outcome measure was lumbar puncture opening pressure at 12 weeks. This has completed recruitment and will likely report this autumn [ClinicalTrials.gov Identifier: NCT02017444].

This UK-based randomised controlled trial, funded by the National Institute for Health Research, aims to compare two methods of weight loss, bariatric surgery and a community dietary program, to investigate which offers the most effective long-term treatment for IIH. Bariatric surgery is recommended by the NICE clinical guidelines for patients with a Body Mass Index (BMI) of over 40, or over 35 with a co-morbidity. Women suffering from IIH have a BMI on average around 38 and IIH is not currently recognised as a co-morbidity for bariatric surgery. Recruitment is in the final stages. The study is expected to report in the autumn of 2018 [ClinicalTrials.gov Identifier: NCT02124486].

The Neuro-Ophthalmology Research Disease Investigator Consortium (NORDIC) have announced that they are currently planning a Surgical IIH Trial (SIIHT) comparing optic nerve sheath fenestration and CSF diversion in those with moderate to severe visual loss, with an outcome measure of perimetric mean deviation at six months. More details will be released soon (https://www.nordicclinicaltrials.com).

IIH:Labs is a translational research program evalauating pathogenics mechanisms and novel therapeutic targets in IIH using in vitro CSF secretion assay and in vivo models of ICP monitoring. Current projects are evaluating the steroid metabolite profile in IIH patients as well as efficacy of existing drugs used therapeutically to lower ICP in IIH. 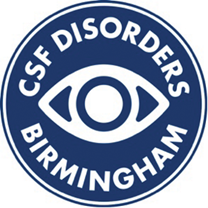 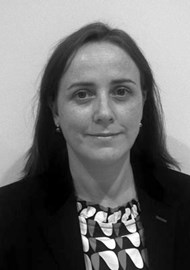 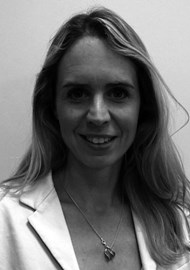