Advances and developments in medical retina
By Rod McNeil

The author provides an update on late breaking clinical trial results in neovascular age-related macular degeneration (nAMD) and presentations on diabetes management from the American Academy of Ophthalmology Retina Subspecialty Day, held during the Academy’s annual meeting in Chicago, October 2018.

In the HAWK and HARRIER phase 3 nAMD studies, the primary endpoint of non-inferiority of brolucizumab 6mg (Novartis) to aflibercept (Eylea®, Regeneron, Bayer) in mean change in best corrected visual acuity (BCVA) from baseline was met at week 48 [1]. The study design of both trials involved a matched loading phase up to week 16, followed by a maintenance phase of fixed brolucizumab dosing every 12 weeks with an option to adjust to fixed eight-weekly dosing based on masked disease activity assessment at defined visits (q12w/q8w) or aflibercept given every eight weeks (q8w) through 96 weeks.

Use of aflibercept treat-and-extend in ALTAIR: 96-week outcomes

The updated EU label for aflibercept permits treat-and-extend dosing beyond every eight weeks in the first year of treatment for nAMD, with flexibility to extend or adjust by four- or two-week increments, based on evidence of efficacy from the Japanese ALTAIR clinical trial [3].

The ALTAIR study assessed the efficacy and safety of aflibercept therapy using two different treat-and-extend regimens beyond every-eight-weeks (with either four- or two-week adjustment increments, minimum treatment interval of eight weeks and a maximum extension of 16 weeks) for treatment naive nAMD patients through 96 weeks. Mean BCVA gains from baseline (~55 letters) were 8.4 to 9.0 letters at week 52 and 6.1 to 7.6 letters at week 96 for the four-week and two-week adjustment groups, respectively [4-6]. There was a mean of 10.4 injections given overall, with a mean of 3.6 to 3.7 injections in the second year. At the week 52 study visit, 57% of study patients had a next intended injection interval of ≥12 weeks based on the next scheduled treatment, and almost 60% of the overall study population had a last injection interval ≥12 weeks at final study visit at week 96 [Figure 1]. Results demonstrate that extended dosing with aflibercept after an initial loading phase is effective in improving and maintaining vision through 96 weeks, with a reduced treatment burden in the second year and a majority extended to quarterly or longer dosing intervals. 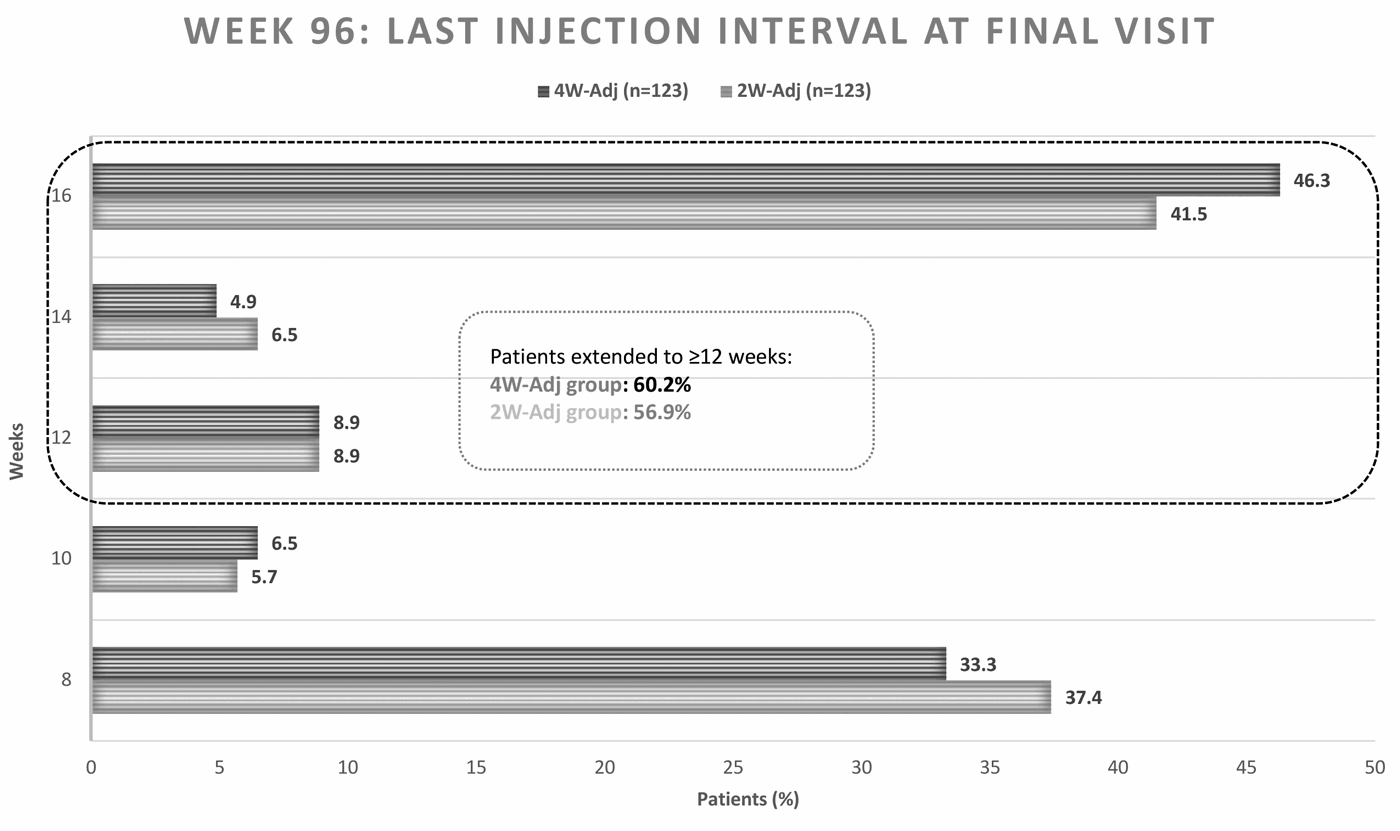 Safety and efficacy of abicipar in patients with nAMD

SEQUOIA and CEDAR are two randomised, double-masked, parallel-group phase 3 clinical trials designed to evaluate the safety and efficacy of intravitreal abicipar pegol (Allergan) compared with ranibizumab (Lucentis®, Novartis) in treatment-naive patients with nAMD. Both abicipar q8w and q12w regimens (after three loading doses at weeks one, four and 12) met the prespecified criteria for non-inferiority to monthly ranibizumab for stable vision (loss of <15 letters from baseline) at week 52 in both trials, with more than 91% of abicipar patients achieving stable vision [7]. The q8w and q12w regimens in SEQUOIA and the q8w regimen in CEDAR met the prespecified criteria for non-inferiority to ranibizumab for the key secondary efficacy endpoint mean BCVA change from baseline at week 52. Reductions from baseline in central retinal thickness (CRT) at week 52 were similar between abicipar treatment arms (six to eight injections) and the ranibizumab treatment arm (13 injections) in both SEQUOIA and CEDAR. BCVA and CRT improvements after the initial loading phase were maintained at week 52.

Simultaneous inhibition of Ang-2 and VEGF with faricimab in nAMD: STAIRWAY phase 2 results

Combined inhibition of angiopoietin-2 (Ang-2) and vascular endothelial growth factor (VEGF) can reduce vascular destabilisation and leakage, and shows potential for increased durability in nAMD. Faricimab (Roche) is a bispecific antibody designed specifically for intravitreal use to simultaneously bind to and neutralise both Ang-2 and VEGF-A with high potency and specificity.

Study results from the ongoing phase 2 LADDER study of the investigational Port Delivery System with ranibizumab (PDS, Roche) for nAMD were presented [9]. In the PDS ranibizumab 100mg/mL treatment arm (n=59), 80% of patients (previously responsive to anti-VEGF therapy) went ≥6 months until the first refill (primary analysis performed when last patient completed the month nine visit). Median time to first required refill was 15.0 months, and BCVA and anatomic outcomes between PDS with ranibizumab 100mg/mL and monthly intravitreal ranibizumab were comparable, with improved or maintained vision over nine months (from mean BCVA at baseline of ~70 letters, mean change of +4.3 letters in the PDS 100mg/mL arm and +3.3 letters in the monthly intravitreal ranibizumab arm at month nine). Subjects in the PDS 100mg/mL group (n=59) required a mean 2.4 ranibizumab treatments over 16.4 months compared with 16.8 injections in the monthly ranibizumab arm (n=41). Postoperative vitreous haemorrhage rate in the PDS arm was significantly reduced after a modified surgical technique was implemented in the course of the trial. The phase 3 Archway clinical trial, comparing fixed 24-week PDS refills vs. monthly ranibizumab injections, began enrolling in September 2018. 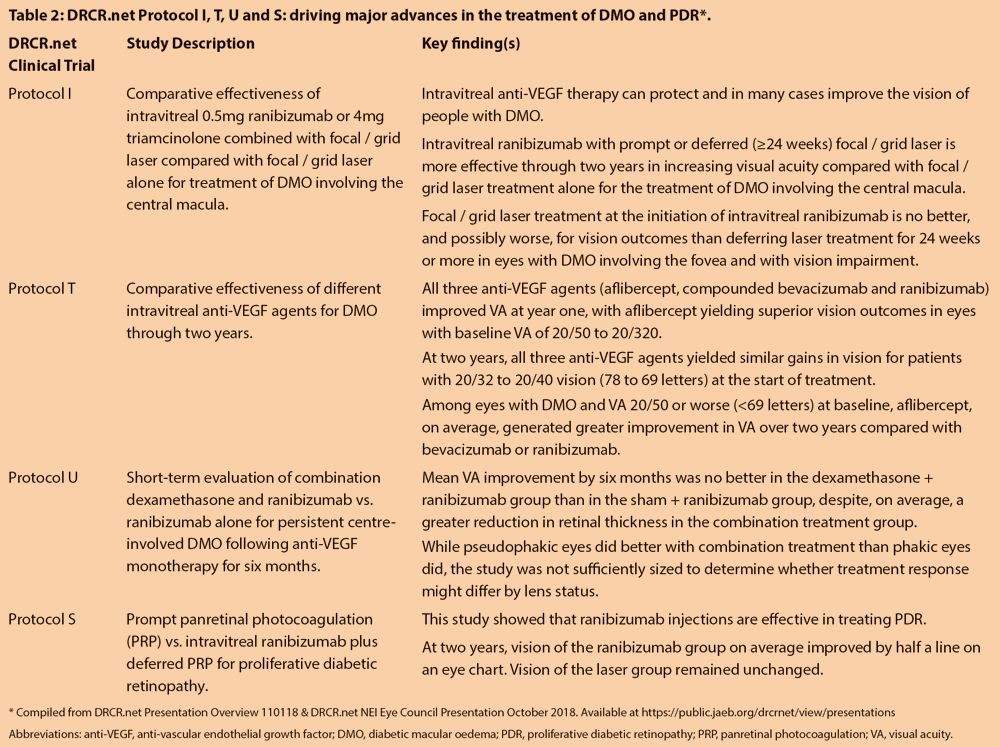 An analysis of outcomes from Protocol T showed that an early suboptimal VA response (<5-letter gain from baseline at 12 weeks) to anti-VEGF treatment did not preclude meaningful vision improvement (≥15 letter gain) at two years without switching therapies, with the same proportion of eyes achieving 20/40 vision or better at two years whether gaining <5 letters or gaining ≥10 letters after three initial injections [16].

With respect to initial anatomic response to treatment, an independent post hoc analysis of Protocol I data found that a strong anatomical response (≥20% reduction at 12 weeks) to ranibizumab was largely maintained during long-term treatment and was associated with greater long-term improvement in VA [17]. However, after controlling for potential confounders including baseline vision and CRT and prior DMO treatment, the association with long-term visual response lost statistical significance.

Changes in DR severity with anti-VEGF therapy for DMO

Anti-VEGF therapy can improve retinopathy severity in a substantial proportion of DMO patients and appears to significantly reduce the risk of retinopathy worsening. Dr Susan Bressler, Baltimore, MD, USA, discussed DRCR.net Protocol I five-year rates of retinopathy improvement or worsening among eyes assigned to ranibizumab in the context of progressive reduction in exposure to ranibizumab therapy [18]. Individuals managed with anti-VEGF therapy for DMO may have simultaneous favourable changes in diabetic retinopathy (DR) severity through five-year follow-up. In an exploratory analysis, improvement and worsening rates did not appear to be altered by the marked reduction in exposure to ranibizumab during the later years of follow-up. However, individual eyes may not maintain improvement, and worsening does occur, highlighting the need for continued surveillance of DR level. The cumulative probability of worsening through five years was 18% among non-proliferative DR eyes and 31% among PDR eyes [18].

Dr Quan Dong Nguyen, MD, Palo Alto, CA, USA, presented findings of a meta-analysis of regression of DR from four similar randomised clinical trials involving ranibizumab in eyes with DR and DMO [19]. Treatment of earlier stages of DR with intravitreal anti-VEGF inhibitors may be considered to prevent or decrease the risk of developing vision-threatening PDR, argued Dr Nguyen. In DRCR.net Protocol T, low rates of DR worsening were observed with all three anti-VEGF treatments. For those with PDR at baseline, significantly higher rates of improvement of DR severity over two years were observed with aflibercept treatment compared with bevacizumab or ranibizumab (improvement rate at one year of 75.9%, 31.4% and 55.2%, respectively, rates and treatment group differences maintained at two years) [20].

What happens to patients after they leave the DRCR network studies?

Diabetic patients underutilise eye care services and are prone to significant lapses in follow-up, due to unanticipated health issues, financial hardship or noncompliance, explained Dr Mark W Johnson, MD, Ann Arbor, MI, USA. For example, of 10 million diabetic patients evaluated in the emergency department annually in the United States, nearly six million are hospitalised [22]. Over 40% of patients with DMO have at least one loss to follow-up of >100 days [23], while Obeid et al. reported loss to follow-up after treatment for PDR occurred in 25.4% of patients over four years [24]. Eyes with PDR treated solely with anti-VEGF injections have worse anatomic and functional outcomes after losses to follow-up compared with eyes that receive PRP [25]. Practitioners were encouraged to carefully consider potentially severe consequences of interruptions in anti-VEGF therapy, and likely compliance with follow-up and treatment regimen, when making initial treatment decisions.