A missed intraocular telescope – an opportunity to re-focus the evidence
By Hani Hasan, Jennifer McMahon and Guy Smith

Intraocular telescopes allow magnification of the image so that it would be projected into a larger area of the macula, this makes the central defect caused by dry age-related macular degeneration (AMD) smaller.

The most common approach is a Galilean type telescope, it is used in the implantable miniature telescope (IMT) lenses and the Intraocular Lens for Visually Impaired Patients (IOL‑VIP) System. For the Galilean approach, two optical elements with high positive and negative power should be used in combination with the cornea. The IOL-VIP System requires implantation of the positive lens in the anterior chamber [1]. In this case report, we demonstrate how complications arising from an IOL-VIP system can result in difficulties in managing these patients. 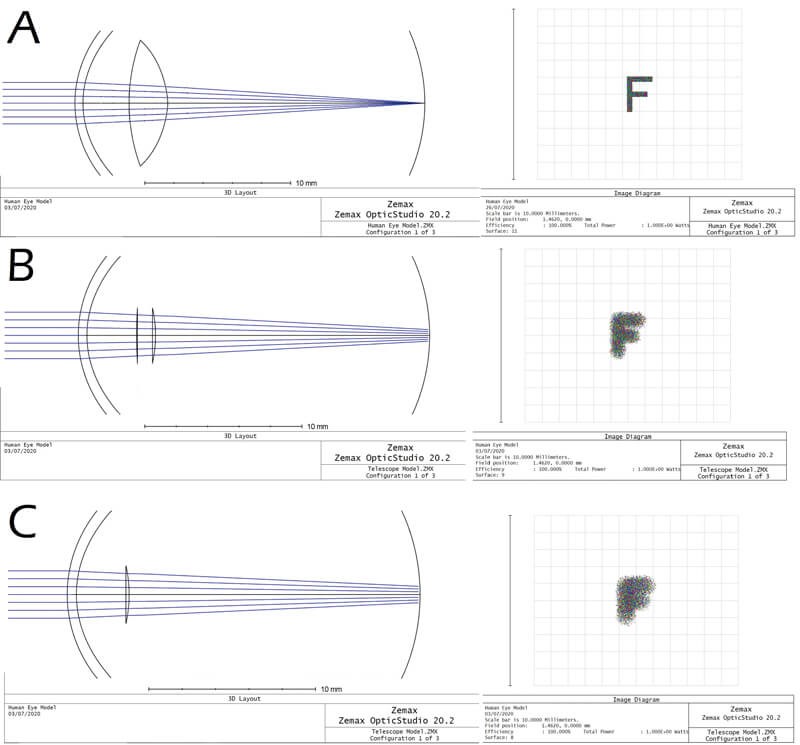 It is important to appreciate that implantable optical telescopes for AMD are complementary to all other available treatments. They are not intended to replace other treatments, but currently they are the only way to help dry AMD patients improve their visual performance. This is an unusual group of patients for any eye surgeon. Surgery is not difficult, but it is not a small incision surgery. Implantable telescopes do not cure the disease or even stop its progress, they enable the patient to function better with the disease. This treatment requires a long commitment, coordinated with a retinal specialist. The VIP-IOL system (Figure 1) consists of two intraocular lenses implanted inside an eye, one high minus (–64.00 D) in the posterior chamber (PC) and one high plus (+53.00 D) in the anterior chamber (AC) [3].

We report a case of an 88-year-old female patient who was seen at the Great Western Hospital in Swindon in January 2014 when she was referred to the Low Vision Aids (LVA) clinic by her optician. At the LVA clinic she was found to have a LogMAR visual acuity of 0.98 in the right and 1.58 in the left eye. The main diagnosis was bilateral dry AMD, but the LVA optometrist did not comment on the lens status. The patient was then seen in the eye casualty in March 2016 when she presented because of deterioration of vision in the right eye to 1.3 LogMAR, she was found to have right corneal decompensation with poor view of the structures behind the iris, the decompensation was attributed to the AC IOL in the right eye and the patient was treated with hypertonic saline drops and referred to the corneal specialist.

In the clinic, the cornea was found to be oedematous despite hypertonic saline. A decision was taken to remove the AC IOL. Unfortunately, there was no improvement of corneal oedema, structures posterior to the iris were not visible and the patient was then noted as being aphakic in the right eye. Removal of the right AC IOL resulted in an inferotemporal iridodyalisis of about two clock hours. The patient was continued on topical hypertonic saline drops for further 13 months until she had an endothelial corneal graft (Descemet’s stripping automated endothelial keratoplasty (DSAEK)) in Nov 2017. The cornea started clearing up by February 2018 but her visual acuity remained hand movement, it was then that the patient was found to have a posterior chamber IOL in that right eye with a refraction of +32.00/-1.00 X 1.

The optometrist was unable to prescribe the correction and the patient was referred back to the corneal consultant.

Further history taking revealed that the patient did actually have an operation in another hospital to have an intraocular telescope to help with her dry AMD. The patient then moved to the area of Swindon, but her notes were not sent through to the eye department. When she was seen for the first time, she had already developed corneal decompensation which resulted in poor visualisation of the posterior segment.

This case demonstrates the multidisciplinary interaction between retinal and anterior segment specialists in the optical management of macular degeneration, it also highlights the importance of communication between healthcare trusts in case of patient movement.

The implantation of two lenses requires a very precise positioning to avoid large refractive errors after surgery which could result from a small relative deviation from the nominal lens position (Figure 1B). Taking the negative lens closer to the positive lens generates hyperopic refractions while a distance larger than 1.7mm between the two intraocular lenses induces a myopic shift (displacement of 0.1mm generates a significant refractive shift of 0.5D [5]).

The timing of surgery should strike a balance between risking the dilution of anti-vascular endothelial growth factors and causing cataract wound dehiscence if the injection is performed too soon [6]. Although cataract surgery is commonly performed and has a good safety profile, surgeons need to have additional considerations when patients are also known to have AMD. Optimal management firstly requires recognition and responsiveness to the clinical complexity of the patients’ cataract and macular parameters, and secondly close attention to their specific current visual function limitations and realistic future aspirations. Maximising vision-related life quality will inevitably require a bespoke plan encompassing the elements of specialised optical, medical, surgical and low vision-rehabilitation care [6].

In addition to the position of the telescopic lenses positioning, the axial length of the eye is an important determinant factor for the choice of telescopic device because short eyes might be optically and anatomically unsuitable, and younger patients were found to have a better visual outcome compared to older ones [7].

In this case, the situation is atypical in the sense that these factors might have been considered before planning the initial surgery, but subsequent surgical intervention and removal of the high negative AC IOL resulted in the patient ending up with a high positive refractive outcome which is difficult to manage surgically or optically.

Surgical management by removal of the high positive posterior chamber intraocular lens (PC IOL) is likely to result in zonular damage, which makes further implantation of a PC IOL very difficult, and carries a high risk of vitreous loss and retinal tears or detachment. Leaving the eye aphakic is usually an undesirable option, but in this situation, it actually brings a 22 dioptre improvement of the patient’s refractive error.

Optical management is unlikely to be practical because a +32.0 lens is too thick to fit in a spectacle frame, the same applies for a contact lens which would also be too uncomfortable to be worn. Another conservative option would be to split the power between a spectacle lens and a contact lens but that doesn’t necessarily mean that the new correction will act as a telescopic lens. Sadly, the patient passed away before these options could be explored further. 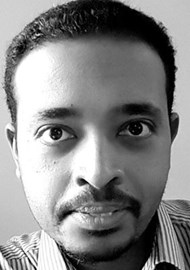