A look into the IOL space
By Rod McNeil

Advances in the design and performance of intraocular lenses (IOLs) continue to be driven by demand for better outcomes, presbyopia correction and spectacle independence, alongside a better understanding of the dynamics of the crystalline lens, newer theories of accommodation and improvements in surgical techniques.

Current IOLs give good unaided vision when the biometry is correct, explained one leading cataract surgeon. Toric IOLs correct astigmatism up to reasonably high levels with customised lenses but they require accurate placement to be effective. This is enhanced by new imaging and integrated devices.

Multifocal IOLs can provide spectacle independence but must necessarily compromise on how the available light is divided up between distance, near and more recently intermediate vision. This leads to some reduction of contrast sensitivity in low light. Simultaneous perception of near and distance images compromises particularly the quality of distance vision and requires neural adaptation by the patient to enable these lenses to work well. Trifocal IOLs, introduced over the past few years, provide a greater range of vision than traditional multifocal lenses.

“As there is no ideal IOL, the present situation is to optimise IOL selection to best suit the individual patient,” commented Professor Rajesh Aggarwal, Consultant Ophthalmic Surgeon, Southend University Hospital and President of the British Society for Refractive Surgery.

On the premium IOL front, the Tecnis Symfony Extended Range of Vision 1-piece IOL (Abbott Medical Optics) is a presbyopia-correcting IOL which received CE Marking (Conformite Europeenne) in Europe in June this year (Figure 1). It is designed to provide cataract patients with increased independence from spectacles with a continuous range of vision including far, intermediate and near distances, with a reduced incidence of undesired halo and glare comparable to a monofocal lens. The unique design of the IOL increases the distance over which an object appears in focus without sacrificing visual clarity or contrast. 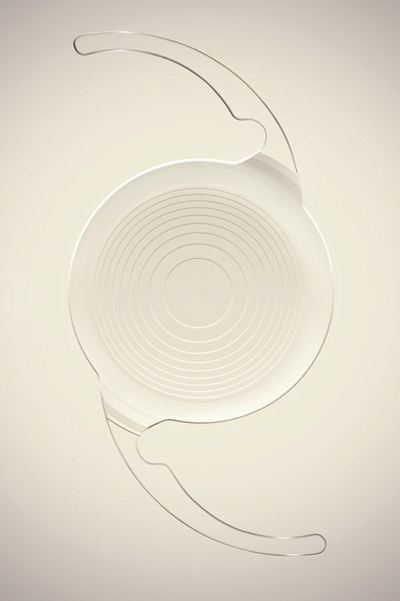 Supporting data comes from a three-month study involving 31 patients receiving the Tecnis Symfony IOL in both eyes compared to 10 patients implanted with Tecnis monofocal IOLs. At three months, visual acuity was significantly (p<0.05) better with Tecnis Symfony compared to the monofocal lens at intermediate (0.031 vs. 0.171 logMar) and near vision distances (0.195 vs. 0.396 logMar) (or 20/20 vs. 20/32). In addition, a two-line improvement in mean near and intermediate visual acuity was seen. The defocus curve for the Tecnis Symfony demonstrated a significant (p<0.05) increase in depth of focus, with a two-line visual acuity improvement through the range of defocus between -1.5 and -3.5D. Patients implanted with Tecnis Symfony IOLs experienced high spectacle independence at three months’ follow-up: 87% close at hand, 94% at arm’s length and 100% at a distance, respectively.

The trifocal IOL AT LISA tri839MP (Carl Zeiss Meditec) features an asymmetrical light distribution between the three different foci – 50% far, 20% intermediate and 30% near, and the light energy transmittance is increased for a maintained contrast sensitivity rate and lower visual disturbance (Table 1). The AT LISA tri can help provide enhanced intermediate vision performance with its intermediate addition of +1.66D compared to apodised bifocal or trifocal IOLs with convolution design, even under poor light conditions. The preloaded AT LISA tri can be implanted through a 1.8mm incision.

The AT LISA tri toric is the latest addition to Zeiss’ portfolio of multifocal lenses, allowing precise astigmatism correction and the prospect of spectacle-free vision for astigmatic patients (Figure 2). Its equiconvex bitoric optic improves optical performance, while clear axis marks on the posterior side of the tri toric, as well as the 4-haptic design and a non-sticky IOL surface enable an easy bi-directional alignment. The AT LISA tri IOLs improve visual acuity over the whole vision range, especially after binocular implantation. The optical zone provides a near addition of +3.33D for a comfortable reading distance and an intermediate addition of 1.66D to perform most daily activities. AT LISA tri range incorporates a square edge design and 360 degree anti-PCO (posterior capsular opacification) protection.

Results from a prospective case series comprising 60 eyes of 30 presybopic patients evaluating outcomes following multifocal diffractive IOL implantation with the AT LISA tri 839MP lens show improvements in near, intermediate and distance vision [1]. Postoperative refractive status at six months’ follow-up was within the range of +1.0 to -1.0D. Analysis of the defocus curve showed that the AT LISA trifocal lens can efficiently improve intermediate vision as well as near vision, the curve remaining almost constant in the interval from -1.5D to -0.5D, corresponding to distances from 67cm to 2cm. The mean change in visual acuity in this range was less than 0.1 logMAR unit (from 0.04 to -0.04 logMAR) (Figure 3). 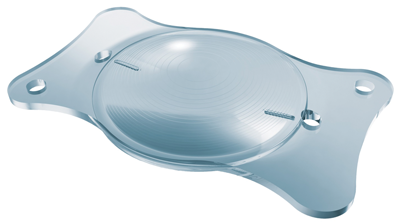 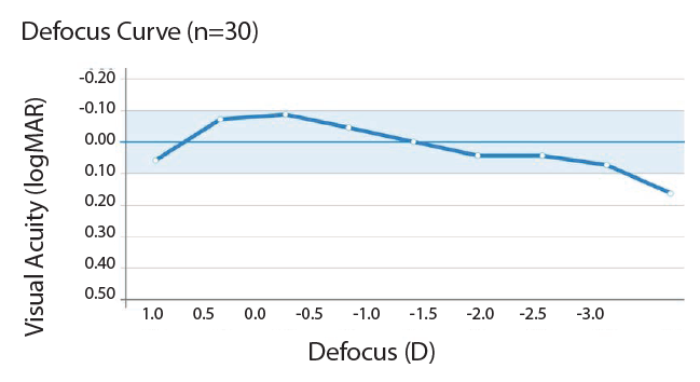 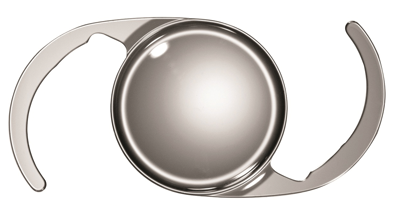 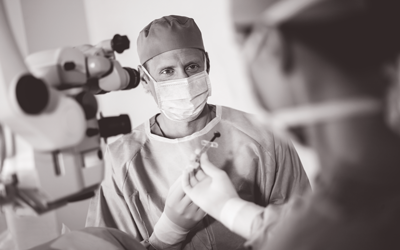 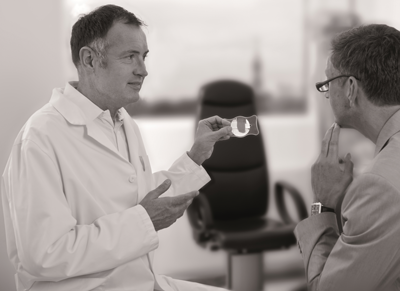 A study of prevalence rates of preoperative corneal astigmatism in cataract patients show more than 40% had >1.0D of astigmatism [2]. Toric IOLs allow surgeons to effectively correct pre-existing astigmatism, providing better uncorrected vision afterwards than a standard lens; they are generally indicated for ≥1.25D astigmatism and ≥0.75D if the meridian of lower k value is along axis of incision.

Rayner’s T-flex aspheric toric IOL was found in a prospective observational study of 27 eyes with preoperative corneal astigmatism ≥1.50D to provide an effective and reliable option to correct pre-existing astigmatism in cataract surgery [3]. At three months following surgery, 25 eyes (93%) had IOL rotation ≤10˚, all patients were ≤12˚, with an overall percentage cylinder reduction of 81%. The T-flex IOL has a wide range of toric corrections: sphere range -10 to +35.0 in 0.50D steps; cylinder range 1.0 to 11.0 in 0.50D steps.

Visser and colleagues reviewed clinical outcomes reported for currently available toric IOLs and multifocal toric IOLs [4]. The T-flex IOL shows equal and superior visual outcomes compared with other commercially available toric and multifocal toric IOLs. It is effective at correcting a wide range of astigmatism. It shows high rotational stability, is easy to implant and IOL power calculations are simplified with the Raytrace online calculator.

Appropriately selected patients can achieve spectacle independence and good visual outcomes at both near and distance with multifocal IOLs, but careful case selection and preoperative clinical evaluation is crucial to postoperative success (Table 2) [5]. Members of an American Society of Cataract and Refractive Surgery (ASCRS) Cataract Clinical Committee noted in a recent paper that the most common reasons for patient dissatisfaction after multifocal IOL implantation are blurred vision due to ametropica, dry-eye syndrome posterior capsule opacification (PCO) or photic phenomena due to IOL decentration, retained lens fragment, PCO, dry-eye syndrome and large pupil [5]. 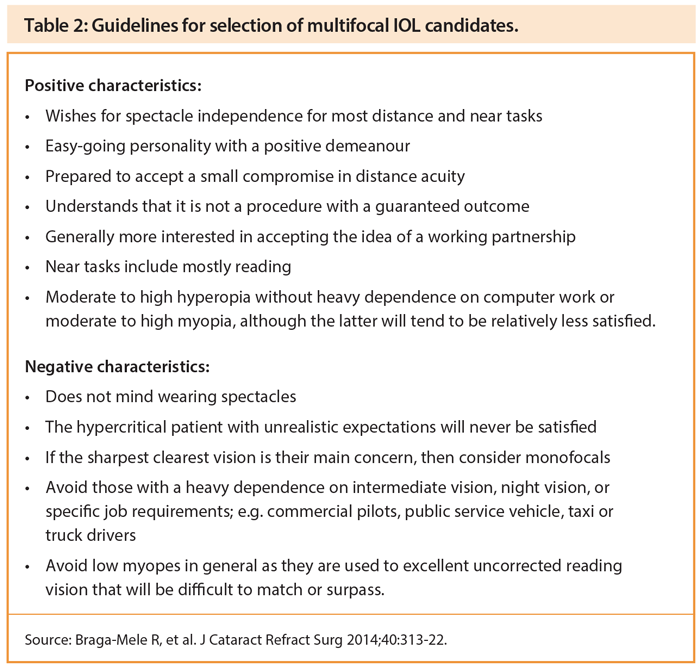 Beyond conventional ‘in the bag’ surgery, IOLs suitable for placement in the ciliary sulcus provide an important safety backup for unexpected or challenging cases such as posterior capsular rupture. An IOL with a larger haptic is needed for sulcus fixation and options include a range of three-piece IOLs with foldable optics and rounded anterior optic edges. The multifocal Lentis Mplus MF30 incorporates a four-footed haptic design and a total diameter of 13mm, making it suitable for sulcus and sulcus-sclera fixation in addition to capsular bag implantation. The Verisyse phakic IOL (AMO) is an iris fixated, anterior chamber design IOL, providing high quality vision for moderate to high myopes.

There’s an exciting range of novel IOL technologies that are now available or in development, most interest focused on power adjustable lenses and different approaches to accommodating IOL technology (Table 3) [6]. 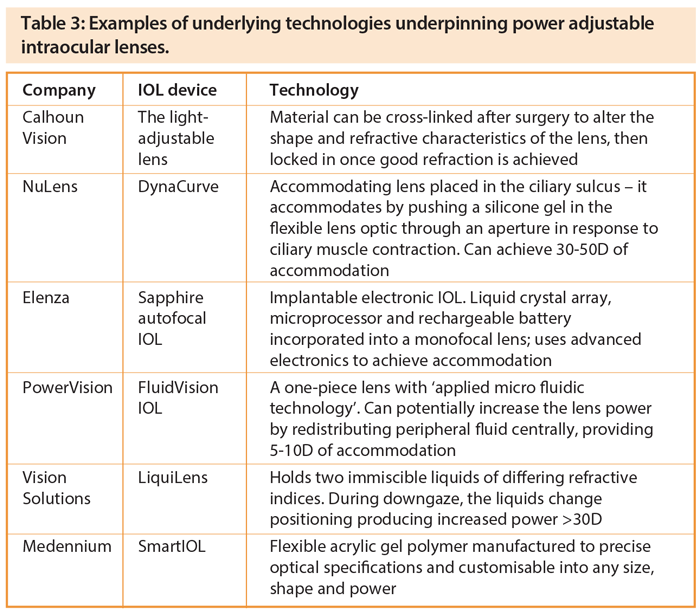 The FluidVision lens (PowerVision) is a fluid-based accommodating IOL designed to permanently restore clear vision at all distances for patients with cataracts and presbyopia. Natural accommodating forces within the eye displace fluid in the lens, the lens changing shape from thin (disaccommodated) to thick (accommodated) as fluid moves from the periphery of the lens through internal fluid channels to the centre. Accommodation forces fluid from the haptics into the optic, increasing the optic thickness and optical power; fluid flows back into the haptics and the power decreases during disaccommodation.

Results from a recent pilot study show that patients who received the FluidVision lens in one eye during cataract surgery had impressive results of 20/33, 20/25 and 20/20 respectively for near, intermediate and distance vision. PowerVision hopes to complete patient enrollment for its CE mark study by end 2014. Early results in sighted eyes confirm the FluidVision lens provides excellent VA and offers >5D of accommodative power. It mimics natural accommodation with shape change and ‘forward’ accommodation. No change in surgical technique is required.

The ultraviolet light-adjustable intraocular lens (LAL, Calhoun Vision) allows surgeons to correct postoperative residual refractive errors by adjusting or customising the power of the lens after implantation, enabling precise non-invasive adjustment of myopic, hyperopic and astigmatic errors up to 2D. Future possibilities include the potential for multifocal and wavefront adjustments, as well as readjustments.

Imran Rahman, Consultant Ophthalmologist at Blackpool Victoria Hospital, outlined results from an audit of 36 eyes of 22 patients implanted with a LAL, in a presentation at the 2014 Trends in Ophthalmology symposium in London. He noted that some 74% achieved refractive outcomes within 0.25D of planned outcome, 96% achieved a refractive outcome within 0.5D of planned outcome and all subjects remained stable after mean follow-up of 19 months (range: 13-24).

New IOL designs are also being introduced specifically for use with femtosecond laser-assisted cataract surgery. Oculentis has introduced a new concept of IOL fixation developed for femtosecond cataract surgery. The Lentis Laser Lens is CE approved and is expected to be commercially available in 2015. Following initial feasibility studies, Oculentis has initiated a large, international multicentre trial to gather more clinical experience and data utilising this IOL, led by the University of Heidelberg in Germany and involving four UK surgical centres. Video demonstration http://www.youtube.com/watch?v=EzTIi8IsbDw&feature=youtu.be shows how the lens works.

The Lentis Mplus High Add is an injectable IOL for patients with macular pathologies, first introduced by Oculentis in late 2013. It will now enter into a phase of controlled trials limited to three centres in Germany, designed to determine the inclusion criteria and the residual dependence on low vision aids for these patient groups. The early feasibility studies evaluating the Mplus High Add IOL carried out by the University of Heidelberg show considerable potential for improving quality of life for patients with age-related macular degeneration (AMD). This aspheric multifocal IOL has an 8.0D near addition, with 1.5 times magnifying power. According to Professor Auffarth, the Mplus High Add IOL is most suited to patients with stable macular disorders who have a minimum visual acuity of 1.0 logMAR and a maximum estimated visual acuity of 0.5 logMAR.

The OriLens (OptoLight) is a sulcus-implanted mirror telescopic IOL designed as an ‘add-on’ lens for pseudophakic patients, allowing AMD patients to gain central visual magnification. The IOL Revolution implant is an option for both dry and wet AMD, while the Implantable Miniature Telescope (VisionCare Ophthalmic Technologies) is designed to improve distance and near vision in patients who have lost central vision in both eyes due to end-stage AMD. London Eye Hospital Pharma’s iolAMD is a small incision IOL solution, providing an intraocular mini-telescope, for the surgical management of dry AMD and other forms of macular disease. It has a magnification effect of around 1.3x and can be implanted bilaterally.

“Prevention of the migration of lens epithelial cells is mandatory not only at the posterior optic edge, but also circumferentially, at the equator of the capsular bag,” added Prof Aggarwal. “New IOL designs are needed to help maintain capsular bag transparency and to better mimic the young natural crystalline lens (re - emmetropia, astigmatism correction, higher order aberration correction, accommodation 4D), without causing any unwanted side-effects.” Of interest is Novartis’ move to ‘in-license’ Google’s ‘smart lens’ technology for all ocular medical uses. The technology, centred on miniaturised electronics, has the potential, says Novartis, to provide accommodative vision correction in the form of an accommodative contact lens or IOL as part of the refractive cataract procedure. Restoration of accommodation remains the ultimate goal in presbyopia-correcting refractive surgery.