In conversation with Robert MacLaren
Professor of Ophthalmology, University of Oxford

Professor Robert MacLaren gave the Keeler Lecture at the Royal College of Ophthalmologists Annual Meeting in May 2019 on gene therapy for retinitis pigmentosa. We caught up with him afterwards to find out more. 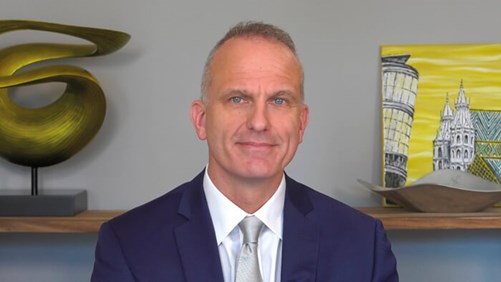 What are the key messages of your Keeler Lecture?

Gene therapy is now actually an approved treatment, so it is not just about research, but it’s actually something patients can have. However, this is only for one rare disease. What we are trying to do is to take the gene therapy concept and make it relevant to different genes so that we can treat more people.

Can you tell us about your current research in this area?

At the moment we are doing clinical trials testing products that we have developed in the lab through the company Nightstar Therapeutics, which is a spin-out company, but we are also looking at things in the lab that may be helpful for other diseases that we can’t treat. So we are looking at having the genes combined so that we can have larger genes delivered by the adeno-associated virus (AAV) vaccine, we are looking at a method where we actually switch genes off using a certain type of silencing approach in an AAV vaccine, and of course we, like others, are looking at CRISPR technology, gene editing, and how we can deliver that by the AAV technology. These are the three things that will hopefully be clinical trials in the future, but the research is both lab work and clinical trials which makes it much more interesting.

What will be the clinical implications?

We are trying to develop a treatment for retinitis pigmentosa (RP), which collectively, including all of the conditions that cause retinal degeneration, is the most common cause of untreatable blindness in young people in the developed world, since we now have treatments for diabetic retinopathy. There is a huge unmet need. We have also got one gene that has been approved so it is up to us to try and find other genes and get them through to clinical trials.

There was a lot of media attention earlier this year about gene therapy trials in age-related macular degeneration (AMD). How would this work?

The concept of gene therapy is to use a virus to deliver a gene under the retina to the retinal epithelium. We’ve demonstrated how we can do that quite efficiently and the choroideremia gene therapy vector has been developed. We know it is safe, we know how it is made, we know all sorts of things about it. It is relatively easy to take out the choroideremia gene and replace that with a gene that is going to be very important for AMD. That particular trial was funded and sponsored by Gyroscope Therapeutics, but some of that technology came out of the gene therapy work we had done previously in the lab in Oxford, so it wasn’t just a clinical trial, but was also something we could work on in the lab, which made it very exciting. I should point out that it is a very early trial. As in all Phase I trials the focus is on safety, we need to build things up and eventually look for signals of efficacy.

How close do you think we are to a gene therapy treatment for AMD?

AMD is a genetic disease, obviously several genes are involved, and we already have a gene therapy treatment for a different type of genetic eye disease, so if you put those two facts together, I think we’re probably not that far away.

Which eye disorders can currently be treated with gene therapy?

The only one is Leber congenital amaurosis, which is an early onset retinal degeneration, caused by mutations in the RPE65 gene. The treatment has been approved in Europe and in the US, and patients have been treated in the US, in France and, very soon, in Germany. I hope that the NHS looks favourably on it as well and we will have treatments available for our patients in the UK, but we’re not quite there yet.

What do you hope will be made possible through gene therapy in the future?

The ideal, of course, would be to prevent someone from going blind who would otherwise loose their sight from a genetic disease. Genetic mutations are occurring all the time, so when you have a baby, for instance, that child will have 70 mutations that are not in the DNA of either the mother or the father. Most of them are silent and do nothing. That’s what we call genetic drift, it is how evolution is driven by genetic change. But every now and then a mutation occurs in a gene that is important for photoreceptor cell function, which means that child is going to get RP, so it is increasing and increasing. We need to tackle it somehow and gene therapy is a really nice technology that is relevant to RP, but it is easy to see how it can also be translated to dealing with other neurodegenerative diseases like Parkinson’s or Alzheimer’s, so there’s a lot of potential. It is the same principle; the gene therapy is very effective in the non-dividing cells using the approach that we are doing and there may be other applications for it.

What do you feel should be the top priorities for research in ophthalmology today?

I think we need to find a better treatment for AMD. I see more and more of it. Obviously, the injectable treatments are effective, but they really only slow things down, there are a huge number of people affected and it is only going to increase.