A team of volunteers describe their experiences of working with the Khmer Sight Foundation in Cambodia.

Cambodia has a population of 15 million people, of whom an estimated 300,000 are blind. This figure is increasing by 10,000 each year. Three-quarters of these cases are due to cataract, with women twice as likely to be affected as men. Other leading causes of blindness include pterygium, glaucoma and corneal scarring. Ninety percent of these cases are either reversible or preventable.

Cambodia has been subject to a relatively recent tragic past – the installation of the Pol Pot regime in the 1970s led to the death of 25% of the population, with those in educated professions a specific target. As a result Cambodia has only 38 ophthalmologists in the entire country, of which only 23 are surgically trained. The country also lacks the health facilities and infrastructure to deal with the number of patients suffering from eye disease. There is currently an estimated backlog of 300,000 patients requiring cataract operations and faced with an ageing population, these figures are set to rise. In a developing country the effects of blindness dictate a future in poverty and the largely rural population lack access to basic eye care services. 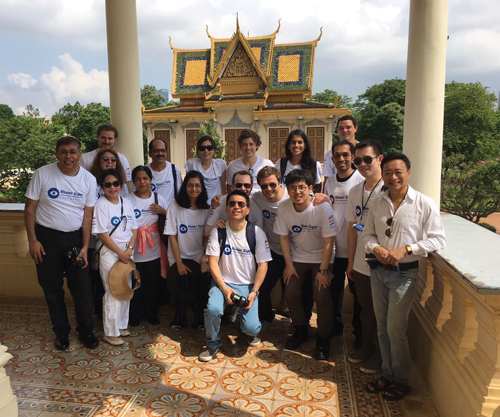 Private group tour of the Palace with HRH Prince Tesso Sisowath, a KSF Board Member.

The Khmer Sight Foundation (KSF) is an Non-governmental organisation (NGO) founded in 2015 by the late Australian Ophthalmologist Dr Kim Frumar, his partner Teresa De Leon and Cambodian Secretary of State Sean Ngu. KSF aims to tackle this issue of blindness by performing sight saving operations for those who cannot afford them, as well as investing in the country’s own ophthalmologists through teaching and training.

Over the next year, KSF plans to carry out a total of 10,000 cataract and pterygium surgeries. In October 2016, Professor Sunil Shah was appointed International Medical Chair of the KSF which began a successful recruitment drive. Since this time, 100 international surgeons have been recruited, 65 from the UK and the remainder from India, German, Singapore, Italy and Austria to volunteer in missions running for 14 weeks.

The first mission ran from 26 April until 2 May 2017 with a UK team that consisted of two consultant ophthalmologists, five ophthalmology fellows, an anaesthetist, a senior optometrist and two junior doctors.

I had never undertaken ophthalmic medical charity work before and prior to the mission had many questions on my mind. What sort of diseases would we see? Would we have enough equipment and supplies? Would the patients be receptive? How would we traverse the cultural boundaries?

“Overall I had a fantastic experience and would recommend this trip to mid level trainees. It is important to bear in mind what skills you can offer to the mission depending on your level of training. Flexibility is key, as each day brings different challenges and may require different ways of working. Being in the outpatient clinic is hard work, but extremely rewarding!”
Andrew Walkden, ST4 Trainee.

Prior to our arrival, KSF had arranged population screening of patients in six rural provinces with the help of local medical student volunteers. Patients qualified for treatment if they earned below 100 US dollars per month. The volunteers performed a brief assessment and those with potentially curative eye disease were identified. Over 3000 patients were screened. Each day of the mission, buses from the provinces with these patients would arrive at the hospital. 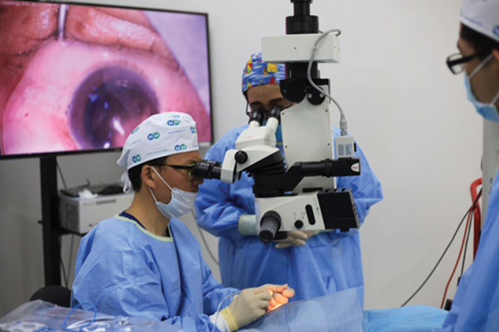 Mr Leon Au being observed by a local trainee whilst performing a cataract operation. 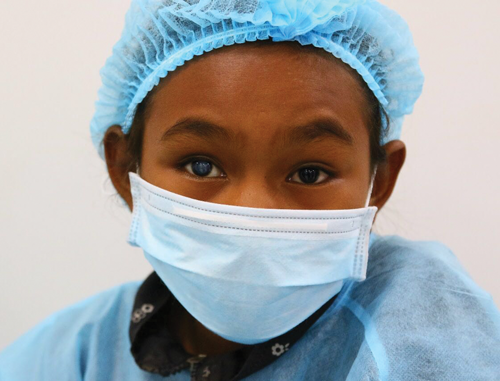 A young girl with a cataract.

The first day was spent setting up the department. The UK team arrived one by one, and with them a whole host of equipment that they had transported. Various hospitals and companies had donated the necessary phacoemulsification machines, medications and disposables. The mission was carried out at the Preah Ang Duong Hospital in the centre of Phnom Penh, a modern hospital donated by Korea. The team carted all the necessary equipment to the stockrooms and sterilised equipment. We were told that patients from the provinces had begun their journey to the local bus stand almost 24 hours earlier than required – sleeping outside, eager not to miss their opportunity for sight-restoring surgery.

We arrived at the hospital the next day at 8am, where the first bus full of patients from the provinces had already arrived. The patients registered with the local medical student volunteers who also took a brief medical history. Our optometrist, Patrick Gunn, taught the local volunteers how to measure visual acuity using the Snellen and illiterate E charts, which ensured a streamlined approach to clinic. The patient would then await review by our team in the clinic room.

The local volunteers were very flexible, acting as interpreters and scrub nurses, consenting patients, changing them for theatre, as well as ordering lunch for us. Once all the patients from the provinces had been seen, the clinic was opened up to the local population of Phnom Penh. 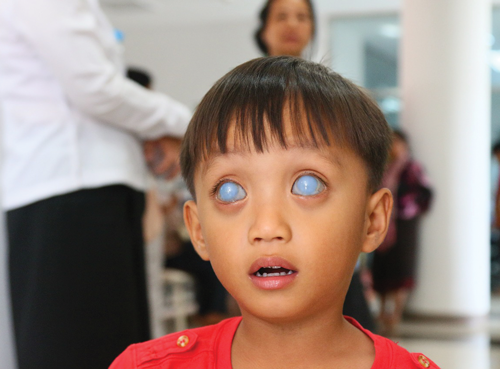 A young boy with congenital glaucoma.

A wide variety of conditions were seen. As would be expected, a large majority of patients had evidence of cataract. However, due to the sheer magnitude of patients, surgery was not offered if their overall vision was manageable. There were many patients presenting with mature, dense cataracts for whom surgery was indicated. Many patients presented with pterygium and if this was severe enough to interfere with their visual axis they too were offered an operation.

There were also some very unusual presentations. One patient presented with an extremely proptosed eye. Earlier in the year he had been diagnosed with an intracerebral brain tumour, however, was unable to afford the life-saving treatment required on his own. Several children with advanced congenital glaucoma resulting in buphthalmic eyes attended clinic, having never been seen by an ophthalmologist before. For these patients, KSF offered some hope although the presentation was very late. Though we did not have the facilities to manage these patients ourselves, we were able to refer them to specialist services as required and the visiting team will shortly include a paediatric glaucoma surgeon. 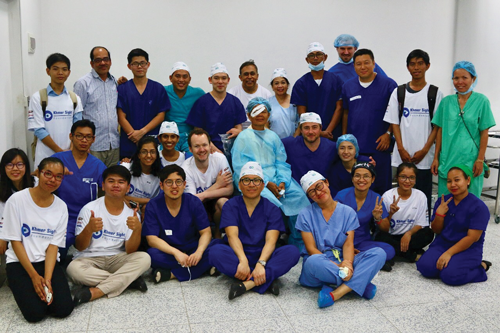 Team photo at the end of a long day.

In Cambodia, parents have been known to commit infanticide if a child is born with physical defects. A particularly difficult case was that of a mother who came with her newborn child, unaware that the baby had bilateral anophthalmia. Breaking bad news is difficult at the best of times, let alone when it requires the use of a third party interpreter. However, we also had to inform the mother of our own concerns regarding the safety of the child. In order to ensure the child remained unharmed, the local police were involved. They agreed to check up on the family on a regular basis.

The operating theatre in Preah Ang Duong hospital was a modern facility with good air-conditioning, four donated phacoemulsification machines and the potential to run up to six operating tables at once. Thanks to the aforementioned donations we had access to a full range of foldable, PMMA and AC lenses, as well as iris hooks, tension rings and vision blue. As this was the first week of the mission, theatre did not run at full capacity – manpower was initially required in set up and teaching. We ran four operating tables simultaneously, three for cataract and one for pterygium procedures. Due to the advanced stage of the cataracts encountered the most senior surgeons undertook the operations, with small incision cataract surgery (SICS) procedures carried out where required. SICS is a low-cost, small-incision form of extracapsular cataract extraction employed in resource poor settings that results in a self-sealing sutureless wound. 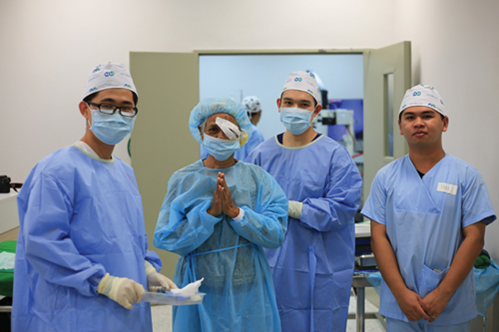 “From an optometrist’s perspective, I found the experience of working in the clinic really rewarding. I think this role will work well for optometrists with either independent prescribing qualifications and those working within acute services in the hospital eye service if working without an ophthalmologist. All optometrists could potentially be very useful; however, less experienced optometrists would likely require supervision from an ophthalmologist while working in the clinic pre / post-op. I worked almost exclusively in the outpatients clinic assessing patients for suitability for surgery, as well as diagnosing and treating any eye disease (where treatment was available) or identifying patients for referral if other subspecialty ophthalmologists attend on future missions.”
Patrick Gunn, Principal Optometrist.

At the end of each day the team would exit theatre together and wave goodbye to a room full of gratitude; the smiling, eye-patched, postoperative patients. These patients from the provinces then slept on the floor overnight in the hospital to await review in clinic the next morning.

Over the course of seven days, over 400 patients were seen in clinic and over 200 patients received either cataract or pterygium surgery.

Phnom Penh proved an excellent location to work in – safe and central, with access to local pharmacies and blood tests if required. I was struck by how receptive the patients were. Imagine the journey through their eyes: they are told they have a treatable eye condition, offered surgery and then operated upon, all within the space of a few hours. The patients were eager to be seen, to have a diagnosis and to be treated if at all possible. In clinic the next morning, it was very encouraging to see those patients with such poor prior vision on the road to recovery.

Sometimes, patients were told that nothing could be done to improve their vision. An 11-year-old girl underwent cataract extraction only to find a toxocara scar and tractional retinal detachment. Whilst she was disappointed, she was happy, grateful that even though she would never have normal vision she could still see slightly better than before. Other patients presented with eye disease that was likely secondary to another undiagnosed primary condition – a gentleman with bilateral exophthalmos highly suspicious of thyroid eye disease and another young girl with cataracts, cushingoid features and a diastolic blood pressure of 150 mmHg. Again, for these patients further investigation was warranted and thus we were unable to offer them treatment.

The days were long, energising and memorable. The learning experiences invaluable. Working closely in a small group for a shared goal proved to be an incredible bonding experience. The UK team lodged together in a comfortable, air-conditioned hotel and we regaled each other with tales of the day over dinner each night. We also developed a good working relationship with our Cambodian counterparts and will return with KSF to Cambodia in the future. 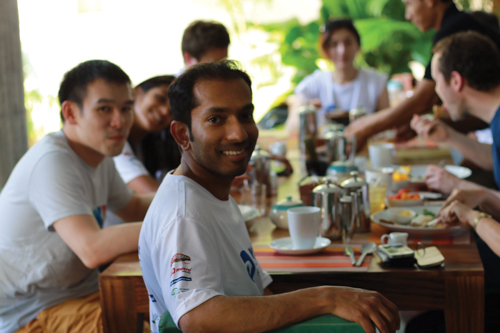 KSF aims to develop sustainable eye care. The Cambodian government has recently increased the number of training programs for ophthalmology specialisation in Cambodia. Alongside this, the government, in association with KSF, has begun work upon a new ophthalmology complex in Phnom Penh. This will create a one-stop centre for eye screening and operations. Free ophthalmic surgery will be undertaken here with KSF international volunteers as well as local Cambodian ophthalmologists. The complex will also house a new school of optometry and teaching facilities for local ophthalmologists. International ophthalmologists will train the current generation of local specialists to become self-reliant and ready to take on the challenge of eradicating avoidable blindness.

For more information please visit www.khmersight.com. If you would like to volunteer email sunil.shah@khmersight.com 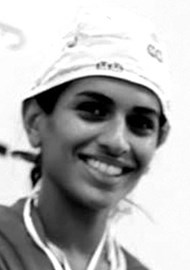 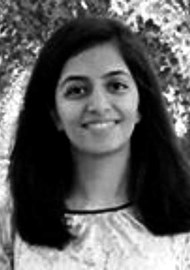 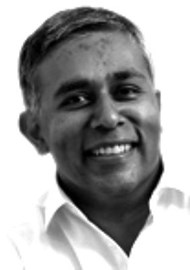