Making a life-changing difference in Bangladesh
By Sheik Rahman

It has always been a desire of mine to volunteer in a ‘vision aid’ type project abroad, but due to various factors I had not been able to fulfil this desire until very recently. A gentleman called Mizanur Rahman (founder and chairman of Just Help Foundation, a local Charity in Hyde and Just Help Eye Hospital, in Bangladesh) approached me wanting some help and advice for the final stages of his dream of building a charitable Eye Hospital in Bangladesh to help reduce reversible blindness due to cataracts. He needed advice on equipment and on the technical side of eye care services, and explained that until the hospital is fully built and operational, eye camps were being funded by the Foundation periodically.

In these camps patients would turn up, be checked / refracted etc. and about 40 patients would be selected for cataract surgery at VARD Eye Hospital (an hour away). To be honest I was bit wary at first, as this was just a small independent organisation, unlike the larger organisations that carry out such work. However, I was keen to take on the challenge and try to help out and make a difference. 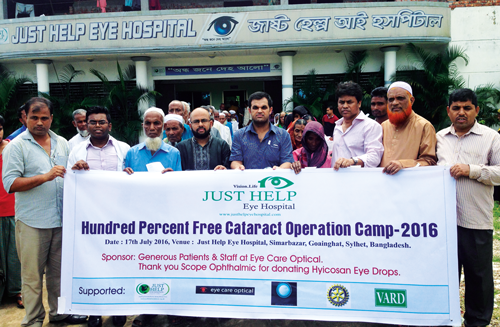 I decided to try and help fund a full eye camp, and approached Mr Imtiaz Ahmed, director of the one places where I work, Eyecare Optical Ltd (Oldham and Rochdale). With his approval and full support we placed charity collection tins at three of the practices. I was overwhelmed by the charitable response I got from the patients, as well as support from the staff. Within five weeks we were able to help raise the required total and beyond for the next eye camp, and the date was set for Sunday 17 July 2016. I flew out to Bangladesh to join the camp, help out (refractions and general eye examinations) and observe the work done by the rest of the team. Scope Ophthalmics had donated 50 bottles of their Hycosan Original eye drops to distribute to those who needed it too.

It was a real eye opener, the numbers of people that attended from far and beyond was phenomenal, all desperate and needy. Around about 220 people turned up and 47 had mature / hyper-mature lens opacities, and visions of hand motion / count fingers (HM/CF). Those that were willing to have the operation were then taken to VARD Eye Hospital, where they were all prepared for surgery. As they waited I could see they were nervous, yet I could tell they were so grateful for this chance to regain the gift of sight again, enabling them to carry basic day to day functions. I found out that a lady who was over 60-years-old had travelled about 35km to come for this free treatment.

Another lady (45-years -old) mentioned she was made redundant from the tea garden she worked at due to not being able to see, and said that she would be able to work again after the operation. One elder gentleman said that he was unable to see his grandchildren that had been born over the last few years. It was a heart-warming and humbling experience, knowing that these eye camps have such a major life-changing impact. It really put things into perspective when I thought about how lucky we are in the developing world, where we refer patients with 6/12 visual acuities (VAs), and it really reaffirmed how lucky we are in the UK to have the NHS. After surgery, the patients were fed and kept overnight and returned the next day back to Just Help Eye Hospital, Sylhet, after seeing the surgeon. They were then reviewed a week later by the team, who came back to Just Help Eye Hospital site. 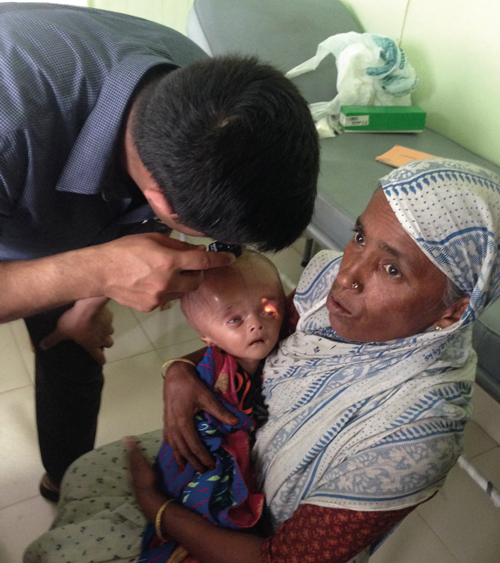 This was probably the most rewarding thing I have done in my life. I am very grateful to have had the opportunity to be involved and I hope to keep being involved in this project going forward. I would like to thank Mr Mohammed Baksh Mozomdar (Vhiru) who looked after me throughout the camp and puts in many voluntary hours towards Just Help Eye Hospital. I would urge other practitioners to get involved in such projects, large or small, as they can make a life-changing difference to so many lives.

Just Help Eye Hospital, is in its final phase of building work and in need of a final push to equip it and get it ready for functional operation, so that cataract operations and general eye examinations can take place on site. We have been lucky enough to have had some equipment (reconditioned: slit-lamp with table, keratometer, ophthalmoscope, trial lens set and frame) donated by Specsavers Opticians. Furthermore, Keeler UK has donated two new ophthalmoscope and ret sets. Haag-Streit have also donated a Perkins tonometer. There is still need for more help and donations of primary and secondary (particularly cataract related such as A-scanners etc)​ eye care equipment. Please contact me if you are able to help. 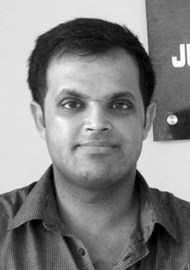