Guildford Rotary Eye Project (GREP) was conceived and implemented during the last 15 years with the sole aim to motivate and empower host Rotary clubs in India and Africa to resolve their problems with their own money. International partners in the West are only catalysts and have a minimal contribution.

Host Rotary clubs in Kolkata and the surrounding villages and towns have built their own hospitals with money raised locally, with support from international partners and The Rotary Foundation (TRF) grants to provide the necessary equipment. 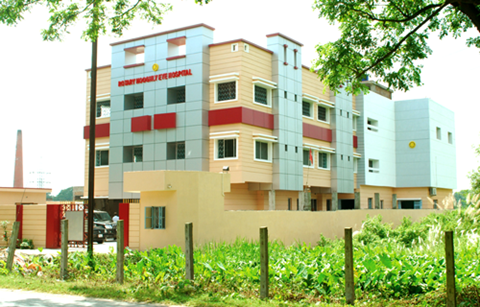 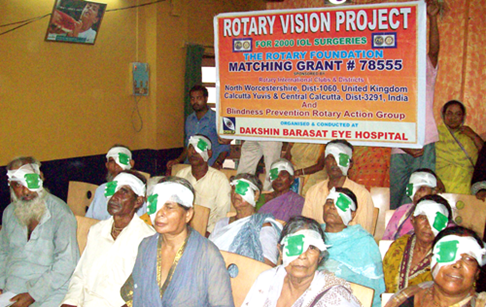 Qualified and experienced surgeons from India were brought to the UK in batches for six weeks’ training in 1999 and 2003 at the expense of TRF. Since returning home they are serving their own people, both privately and without fees for poor. They are also training other surgeons to perpetuate the benefit.

Hooghly Rotary (25 miles north-west from Kolkata but two hours journey each way) was due for closure by Rotary International owing to dwindling numbers of members (8/9) in 1998/99. They took the decision to build a Rotary Eye Hospital in Hooghly. Land and a dilapidated building were procured with money raised locally, assisted by Kolkata Rotary, at a pepper-corn rent on long lease, which they refurbished at their own expense with marble floors and walls. They also raised one-third of the cost of the required equipment (including microscopes and other operating equipment), which was a considerable sum of money. International Rotary led by Guildford contributed another third of the equipment costs, while TRF provided the rest of the funds. The hospital is owned and run by the Hooghly Rotary Welfare Trust; members include local dignitaries and Rotary members. The hospital opened at the dawn of the new millennium in June 2000. They now serve 35,000 patients in the clinics (including laser) and perform 3,500 operations annually.

A local man was so impressed with this Rotary ‘miracle’ where there was nothing before that he made an unsolicited donation of a large plot of land adjacent to the national highway, on which Hooghly Rotary has now built a new hospital (15,600 sq.ft) by raising approximately £150,000 from generous local donors and assisted by Kolkata Rotary. They have also obtained an additional microscope via TRF’s Matching Grant (MG) mechanism to increase the number of operations to 5,000 per annum this year and hoping to expand to 10,000 in the future.

Hooghly Rotary’s success has motivated clubs in the south, east and west of the Kolkata region (Dakshin barasat, Canning, Joynagar, Kakdwip, Lalpur, etc.) to build such hospitals at their own expense and utilise the MG mechanism to fund equipment. Each hospital is owned and run by the Local Rotary Welfare Trust with a self-financing scheme. 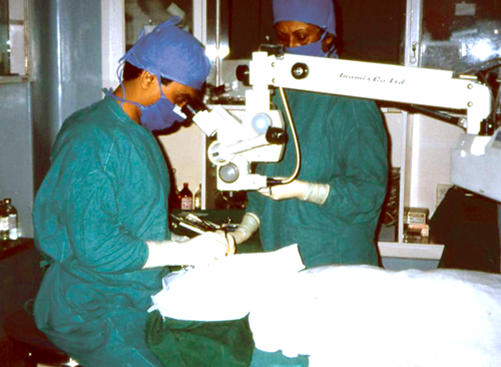 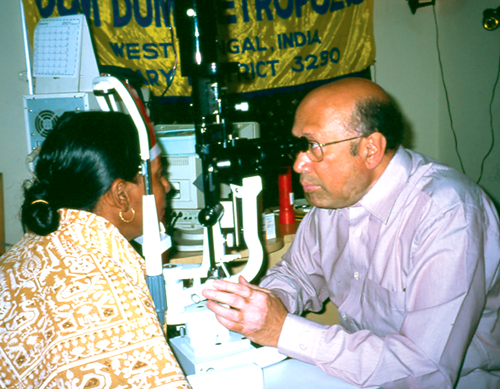 Rotary has now 18 such hospitals, which have performed 50,000 operations per annum between them and treated half a million people in their clinics. They also plan to build more hospitals and double their output.

Each hospital has the capacity to serve more poor people, using the MG mechanism for finance. Each cataract plus intraocular lens (IOL) operation costs the equivalent of £15, a cost which is shared equally between the host club, international club and TRF. Guildford Rotary collects all donations (in multiples of £5) from other Rotary clubs and private donors to add up to £5,000, which sponsors 1,000 operations. Every £100 given to Rotary provides 20 operations, compared with SightSavers (£27 per operation) and Orbis (£30 per operation) who are only able to provide three or four for the same amount. GREP is able to offer lower prices as it does not have to find funds to pay managers or office staff, or for advertising – all volunteers also cover their own travel expenses. In contrast, most Non-Government Organisations (NGOs) have to dedicate between 20 and 35% of the money they raise to covering expenses. Local surgeons are provided with training and initial financial support, but are then encouraged to be as self-sufficient as possible.

The scheme has also been implemented in Nigeria. Auchi Rotary club in Edo state, 1,000 miles north of Lagos, obtained space in a government hospital and opened a Rotary Eye Unit two years ago. Nigeria Rotary contributed $16,000, Guildford Rotary contributed just $4,000, but Kolkata Rotary came to the rescue with $10,000. TRF contributed $25,000, making a total of $55,000 to purchase the required equipment.

Nigerian surgeons were trained in India for several months to get them up to a good standard. The quality of care is so good that the governor of Edo state sends his own family and friends to the eye unit for private treatment. As in India, the profits from private treatment pay for free operations for the poor. Kolkata surgeons visit Edo for two to three weeks at least once a year. This is done voluntarily and mostly at their own expense, partially subsidised by TRF.

The GREP concept inspires the surgeons to serve and motivates locals to donate.

When Rotarians and other international donors visit these hospitals, they are always pleased to see the good use of their donations, as well as the enthusiasm and zeal of the local Rotary clubs to serve their communities. Such donations act as a catalyst in helping and inspiring host Rotary clubs to spend their own money, time and energy to create a legacy of curing avoidable blindness. The surgeons are inspired by their training and the provision of high quality equipment, as well as gaining satisfaction in providing free services to the poor.

TRF’s Matching Grant model has also been used in other areas where there is a need. Many schools have been provided with tube wells for drinking water and septic latrines have been built for pupils and staff. Where the girls were leaving school at the onset of puberty prior to the provision of these facilities, they are now being educated to higher school and college level. Education will transform the lives of these girls and wider society too.

Training centres are now equipped with sewing machines to allow girls to learn new skills and computers so that young people can gain qualifications to get a better job. Three-wheel cars are bought to distribute to the young unemployed, helping them to earn their living.

GREP has realised that it isn’t possible to resolve the problems of other countries with donations from abroad, but rather local groups must be given the motivation to spend their own money wisely and effectively.

About Rotary Rotary is a large organisation, consisting of 32,000 clubs in 200 countries. In the UK we have about 1,750 clubs with 57,000 approximately members. Rotary welcomes members from every profession in all countries, united by the aim of working together in their own communities, as well as internationally, for the benefit of others less able to survive or achieve their potential. Rotary supports educational and humanitarian projects everywhere. More details are available at www.rotary.org and www.RIBI.org

GREP is seeking volunteers / ambassadors up and down the UK to help us spread the word about the scheme. We will provide you with a DVD and leaflets (produced at our expense) to help you to spread the message. 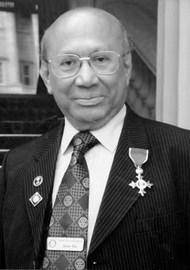