A comparison of light sources in retinal imaging
By Fabio Galli

Before starting to talk about the light sources present in retinal imaging, it is necessary to start from the base: the light. Light is an electromagnetic wave whose smallest part is the photon (or quantum of light). A high frequency corresponds to a short wavelength, which in turn corresponds to a ‘colour’ if within the range of the visible spectrum (the visible spectrum is the portion of the electromagnetic field perceivable by the human eye) [1].

Imaging techniques have evolved over the decades and more correctly, over the centuries, in relation to the innovations of technologies from which they are composed, and in particular, my attention is dedicated to retinal imaging techniques and technologies, such as the different methods of retinal photography.

It is also important to remember that as the frequency increases, the penetration capacity decreases. To offer a practical example, in retinal imaging, near-infrared (NIR) retinal imaging has a longer wavelength, greater penetration and lower frequency compared to a blue or green wavelength (for example, used for red-free imaging).

It was the last decade of the 1800s when the first fundus image named ‘Photographing the eye of the living human retina’ was published in Photographic News on 7 May 1886 and the second image named ‘On photographing the eye of the living human retina’ published in Philadelphia Photographers on 5 June 1886, both by Jackman and Webster and the technologies available were certainly not those of today. Nowadays, in fact, we mainly have four different light sources available in devices dedicated to retinal imaging; the oldest in use is retinography called ‘flash-based’ (developed in the 1930s) to date evolved to ‘integrated electronic flash’ (developed in the 1960s). 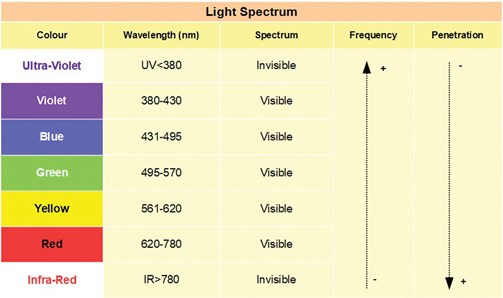 Flash-light sources are the oldest of the aforementioned (historically, the first flash source can be traced back to the year 1839, the year in which L. Ibbeston used artificial light in the photographic field) [2,3,4]. It offers a photographic result that can be considered as ‘natural’ as the colours are identifiable as ‘real’ and not mediated. However, this type of light source has disadvantages: first, it is dazzling for the patient. It is also affected by the conditions of the surrounding light environment and the reflectivity of the ocular structures.

Non-transparent ocular structures in the patient will partially or totally prevent reaching the retina.

LASER light sources offer the possibility of acquiring a monochromatic or, in some cases, polychromatic image (offered by several LASER sources in simultaneous acquisition, named ‘false colour’ or ‘pseudo colour’). The advantage of this type of acquisition is the possibility of observing the retinal image obtained at different depth levels in post-acquisition and in some cases with the most advanced retinal imaging devices even during acquisition. This is because compared to ‘flash-based’ source photography, LASER source photography has a much greater tissue penetration and can offer useful results even in the presence of ocular structures that are not perfectly transparent. Furthermore, this type of source does not create glare for patients.

SLD light sources offer a result that combines the technical characteristics of LASER and LED sources. Unlike the previous ones, however, they are not used in fundus photography, but we find these sources in use in OCTs for the acquisition of tomographic images.

Each light source has specific characteristics that offer different results [5]. After this brief introduction into the technical characteristics of each of these sources, we can better understand their differences. 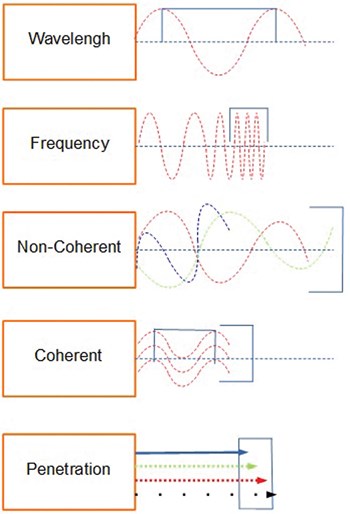 As anticipated, we find this type of light source mainly in cameras, and over the years it has been constantly modified thanks to various technological and engineering innovations. The light emitted by a flash is an artificial type of light, with characteristics similar to natural light. It is generally electronically powered (battery system); this type of light source thus offers natural colour details in retinal photography which powers the circuit consisting of transformer, amplifier and condenser. The condenser is charged; the charge of the condenser is amplified in voltage by a transformer on a Xenon tube (or lamp) which emits the flash of light. This type of light source offers a full-spectrum, phase-non-coherent, non-unidirectional electromagnetic wave [6,7]. 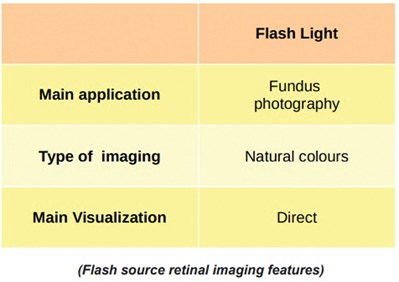 Differently, LASER, LED and SLD are three variants of the diode. That is a structure composed of two layers of material, one positively charged and the other negatively charged, and both doped. The electronic stimulation of these surfaces activates reactions which, through the exchange of electrons, create electromagnetic energy that produces what, once guided and channelled, is more commonly called a beam of light [8,9].

The LASER source is an optoelectronic device capable of emitting a laser beam emitted from the active area of the semiconductor with which the diode itself is made. Photons (particles of light) are excited by the current and release energy in the form of light; this light is directed into a beam that forms what we commonly call the ‘LASER beam’. Usually the LASER source consists of three components: an external source (pump), the active laser medium and the resonator (optical cavity). The type of light beam emitted by the LASER is coherent and monochromatic; this means that this beam will maintain its phase and its wavelength in space and time. The emissions of this type of source, as it is coherent and unidirectional, offers an extremely high power density (irradiance). In a very simple way, a LASER emits a ‘peak’ attributable to a ‘colour’ (frequency and wavelength): a LASER built to emit at 490 nm will be constant in space and time at 490 nm (one of the frequencies representing the spectrum of blue light) [10,11].

Many retinal photography instruments use laser sources to work with monochromatic imaging, obtaining the study of retinal structures at different depths and with different interactions between tissues and wavelengths. In post-acquisition, the image will generally be represented in grey scale or in ‘false-colours’. The main wavelengths used in retinal imaging are in the blue, green, red and near-infrared spectrum [5]. 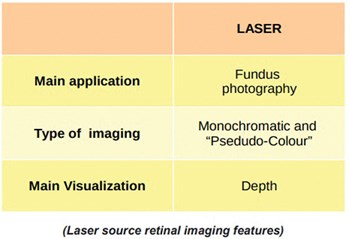 In this case, we are talking about an optoelectronic device that uses the property of some semiconductors to produce photons through a spontaneous emission when they are crossed by an electric current (this property is called electroluminescence); the emission of light through an LED source can be of the continuous or intermittent type. The beam of light emitted by an LED source is non-coherent and monochromatic; unlike the laser that emits a single wavelength, the LED source emits a light in a very narrow frequency range centred on a wavelength (e.g. blue light 460-480 nm, central peak 470 nm). The main retinographs that use LED sources work to recreate the image both in monochromatic function (using blue LED, green LED, red LED) and in the ‘real-colour or ‘true-colour’ function (using a white LED); this creates a colour image similar to the images acquired by flash-based retinography [12]. 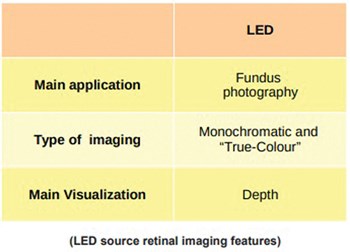 This light source is also based on the properties of semiconductor materials and is an optoelectronic device like LASER and LED. This source also generates a spontaneous and amplified photon emission; the wavelength and the emission peak of SLD devices depend on the semi-conductive material from which they are composed and on the level of activation electrical energy. SLD devices are designed to offer a high amplification in spontaneous emission but, unlike LASER sources, they show a reduced response to obtain the same functionalities of action and use; this feature is technically obtained through the use of an inclined wave guide and anti-reflective coated facets (ARC). SLD produces a non-coherent light beam with a variable bandwidth like LEDs and in some cases even wider bands [13,14]. 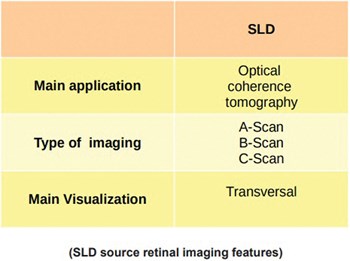 It is a hybrid of LASER and LED: combining the output power and brightness of the first with the broad optical spectrum of the second. These characteristics make the SLD source optimal in the acquisition of OCT imaging, as it allows us to obtain particularly accurate and high resolution measurements. In Figure 7, the main characteristics of these light sources have been summarised and simplified to appreciate their different properties.

In conclusion, we can affirm that the transversality of different scientific and technological fields has produced different light sources which, thanks to their peculiar characteristics, offer a wide range of solutions in retinal imaging instruments to obtain the most correct diagnosis possible. Without a doubt, every single light source also offers the best performance in combination with different optical systems, specifically built to increase functionality and reduce aberrations. Knowing the light sources used in the different retinal imaging technologies can help us to understand the limitations and advantages of the instruments we use.

Declaration of competing interests:
The author was previously employed by Miloftalmica, Italy, which managed the Heidelberg Engineering and Imagine Eyes brands, and was responsible for the provision of education / training related to ophthalmic instrumentation. 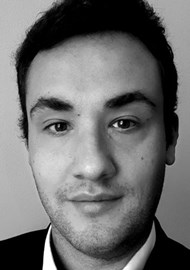