Performing a trabeculectomy is like giving birth to a baby. It may be traumatic and there is scope for devastating error but once the operation is completed only then does the real work begin. The bleb must be nurtured into life, coaxed into maturity and kept alive until adulthood and even then it is a living breathing entity with thoughts and feelings that must be respected if you and your patient are to retain a functioning bleb.

An algorithm for recognising and treating complications

Medicine is full of lists. What separates a competent diagnostician from an Internet website is a constant remodelling and reordering of mental lists in real-time based upon skilled history taking and physical examination. During the course of one’s medical career, experience grows and moulds our lists due to past cases, population prevalence and emerging trends. Ultimately, an experienced clinician will quickly narrow their focus on a few likely choices soon after taking on a case.

Nevertheless, it is important to know and remember a complete list of possible diagnoses when faced with a clinical problem for those rare instances when something unusual rears its head. One can spend endless hours trying to memorise unorganised lists. Not only does this waste time and mental energy, but also leaves one prone to forgetfulness and, moreover, results in a seemingly random and unsophisticated approach in rounds, ward presentations and examinations.

A better approach, therefore, is to have one in the first place. Two of the most successful are the classification and algorithm approaches. Either method allows one to remember a smaller number of items, and triggers one’s mind to ‘fill-in’ the blanks. Whether silently going through these approaches during a clinical encounter, or explicitly demonstrating your polished differential diagnosis to an examiner, these strategies will help you learn and remember medicine.

Classification approaches are used most commonly. These include anatomical and etiological varieties. The former, such as a ‘front-to-back’ anatomical approach of the eye for ocular disease and deafness, works well for certain differentials. The latter, likely the most popular and versatile, lends itself to the most diverse differentials. An example includes the vascular, inflammatory / infectious, neoplastic and iatrogenic causes of neovascular glaucoma. Ultimately, one’s own custom differential will be the most memorable.

The algorithm approach is less commonly used, but arguably the most satisfying, particularly for visual learners. Think back to your days learning about thrombocytopenia. Now list its causes. What initially seems like a daunting task is made less so when one immediately forms two descending paths: decreased production versus increased destruction. Even after many years, this simple first step allows previously practiced mental processes to reactivate and a few causes to be recalled. The ideal algorithm creates enough logical branches until each category contains a small number of conditions, now easily recalled and well-organised. Within ophthalmology, nowhere does the algorithm approach shine better than in the field of glaucoma. In this and my next article, my algorithm approaches to post-trabeculectomy complications and angle-closure glaucoma will be presented, respectively.

The algorithm in action

Postoperative trabeculectomy complications are a favourite written and oral examination topic, and also a clinically relevant area that most ophthalmologists will encounter. Diagnoses range from mild and easy to treat, to vision threatening where time is of the essence. An organised approach will save time and stress as one arrives at a diagnosis, from which point appropriate decisions can be made (Figure 1). Of note, blebitis and bleb-associated endophthalmitis are not included. 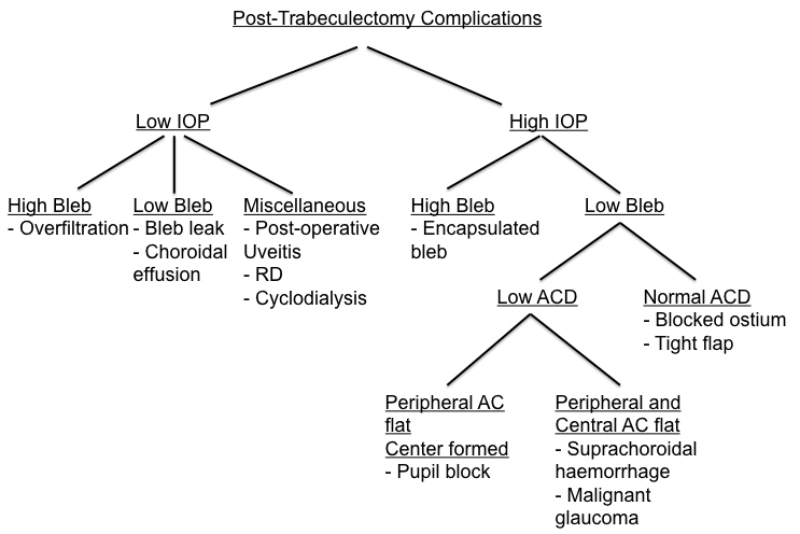 The first-order branch divides into high intraocular pressure (IOP) and low IOP. A critical point should be noted in this scenario: ‘high’ and ‘low’ are relative to your postoperative situation, and not to the typical IOP range learned from textbooks. The patient has just had filtering surgery, compounded by a minor element of postoperative inflammation and ciliary body inactivity. As such, an appropriate postoperative IOP should usually be less than 10, and IOP in the mid-teens is often enough to raise suspicion of our high IOP algorithm.

If presented with a high IOP scenario, the bleb should be examined next for the ensuing two second-order branches: high bleb and low / flat bleb. The former is likely due to an encapsulated bleb. Aqueous suppressants alone can sometimes be successful to lower IOP and allow bleb wall remodelling. If unsuccessful, further options include needling or surgical bleb revision.

If the bleb is flat, the depth of the anterior chamber (AC) should be determined for a further two third-order branches: normal AC and low AC. In the former scenario, there is an obstruction of flow between the AC and bleb, resulting in a flat bleb and elevated IOP. This is usually due to a blocked ostium or a tight flap. Gonioscopy can be performed to determine if a blockage exists and with what material, such as coagulated blood, iris tissue or vitreous. Occasionally ocular massage can be successful to clear a blockage; if not, YAG laser or needling can be used to reestablish flow. A laser suture lysis (LSL) can be used for a tight flap, usually within the first 21 days after surgery before complete healing has occurred. Some surgeons will use releasable sutures for the flap that can simply be pulled out at the slit-lamp if required. If unsuccessful, needling under the flap can also be attempted 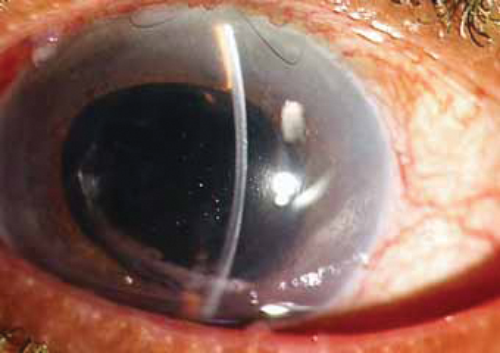 The flat-AC scenario is the most critical to remember in the high IOP branch of this algorithm. If an iris bombe appearance is present (flat peripheral AC, formed central AC), pupil block is likely present. Treatment involves cycloplegia, topical steroids and aqueous suppressants, and definitive management with laser or surgical peripheral iridectomy (PI). If the AC is completely flat (Figure 2), the two likely options include suprachoroidal haemorrhage and malignant glaucoma. Clinical clues differentiating the two include severe pain and acute presentation in the former. B-scan should be used to document the presence, size, and location of suprachoroidal haemorrhage and its coagulation status.

Indications for acute surgical drainage include ‘kissing’ choroidals (retina-retina touch), corneal decompensation, retinal detachment or uncontrollable and excessive pain or IOP. In lieu of these, surgical drainage is more successful upon clot liquefaction in seven to 14 days, with conservative management (cycloplegia, topical steroids and aqueous suppressants) in the meantime. If haemorrhage is not present, the diagnosis of malignant glaucoma must be considered, which usually requires the presence of a patent iridectomy to rule out a component of pupil block. Medical therapy is often successful, including strong cycloplegia, aqueous suppressants and topical steroids. Miotics are contraindicated. If medical therapy is unsuccessful, YAG laser can be used in pseudo- and aphakic patients to disrupt the anterior hyaloid face. If required, surgical management includes pars plana vitrectomy and / or irido-zonulo-hyaloidectomy (IZH) to create a unicameral eye. 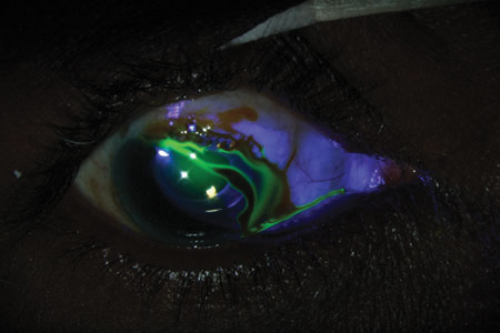 If upon initial examination the IOP is low, the bleb should again be examined next. If the bleb is low, examination should focus on detecting a bleb leak or choroidal effusion. A Seidel test using fluorescein can help detect a bleb leak (Figure 3), which requires topical antibiotic drops to help prevent intraocular infection. Further management is aimed at promoting healing and closure of the bleb. This can include decreasing or stopping topical steroids to disinhibit inflammation, and the use of ocular irritants such as topical gentamicin, trichloroacetic acid or autologous blood injection. Aqueous suppressants may decrease flow through the leak, thereby promoting closure. Glue, large diameter bandage contact lens, or careful pressure patches can also be used. If the AC is shallow, an ophthalmic viscosurgical device (OVD) can be used to reform it, and / or topical atropine can be used. If the attempted medical therapies are unsuccessful after a short period, there should be a low threshold for surgical repair of the bleb. Choroidal effusions are common with hypotonous states post-trabeculectomy surgery. These will often resolve once the IOP rises, and can be treated with topical cycloplegia, topical and occasionally systemic steroids, and AC reformation with an OVD if collapsed.

If the bleb is high with a low IOP, the most likely scenario is overfiltration. Similar to a bleb leak, management goals include promoting healing and flap closure. Strategies again include decreasing or stopping topical steroids, using aqueous suppressants, gentamicin, autologous blood, pressure patch, cycloplegia or AC reformation with an OVD if required. If medical therapy is unsuccessful, surgical revision is indicated.

Finally, three miscellaneous causes should always be considered in the low IOP algorithm regardless of bleb height: postoperative uveitis, retinal detachment and cyclodialysis cleft. These can be ruled out with careful examination.

Figure 1 depicts the algorithm to post-trabeculectomy complications and is a useful figure to commit to memory. It offers a simple approach that concludes with one to three diagnostic options based on careful examination techniques. Not only will this prove useful at the slit-lamp, but will also provide a clear and elegant approach to a stressful case in the examination scenario.

Trabeculectomies are common operations performed around the world for one of the commonest causes of blindness, primary open angle glaucoma, and being able to deal effectively with the potential complications of this condition is essential for any trainee. As a result of this it is a common subject for the fellowship exam and a good easy to understand approach is vital for both clinical practice and exam success. 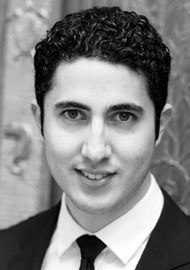