Evolution of refractive surgery stays true to the quote of Theodore Roosevelt: “The more you know about the past, the better prepared you are for the future.”  Refractive surgery is an evolving field, which thanks modern technologies for refining ideas by Jose Ignacio Barraquer, a father of corneal refractive surgery.

The idea of altering corneal shape to influence refraction was started with work by Jose Ignacio Barraquer Moner in 1948 [1]. Barraquer used to perform a procedure known as ‘keratomileusis’, meaning ‘sculpting of the cornea’ [2]. The procedure involved resection of a button of anterior cornea with a microkeratome, freezing it in liquid nitrogen to allow for modification of its shape on specially designed lathe, before it could be transplanted back into the recipient. Barraquer used trigonometric calculations to work out the volume of tissue which had to be removed to correct a particular refractive error (the same calculations are employed in today’s laser refractive surgery). In 1964 his thesis on ‘Laws of Thicknesses’ defined the principles of corneal refractive surgery; cornea flattens when tissue is removed from the centre (used in myopic laser corrections) and it steepens when tissue is removed from periphery (used in hyperopic laser corrections) [2].

During the 1960s two other surgeons were experimenting with ideas of how to correct refractive error by altering corneal shape. In Poland, Krwawicz described a procedure termed ‘stromectomy’, which he used to treat three highly myopic eyes [3]. Manual incisions at different corneal depths allowed a thin layer of stroma to be removed in order to correct refractive error (principle employed in today’s small incision lenticule extraction). In Russia, Pureskin described a concept of creating an anterior corneal hinge (first flap) to allow for easy access to underlying stroma for further treatment (principle used in laser assisted in situ keratomileusis) [1].

It was not till 1986 that freezing of the resected corneal disc was abandoned and resected corneal disc rather than moulded was treated with a second pass of a microkeratome-known as Barraquer-Krumeich-Swinger (BKS) technique. Luis Ruiz further revolutionised corneal surgery and was the father of ‘in- situ keratomileusis’ [4]. Whilst performing BKS technique, he made the first keratome pass too thin to carry it out. To ‘save the day’ he performed a second deeper microkeratome pass on a patient’s eye rather than on resected disc; and ‘in situ keratomileusis’ was born.

Between 1980 and the 1990s corneal refractive surgery was combined with excimer laser, which was then the emerging new technology capable of precise cleaving of tissues without thermal damage to surrounding structures. Marshall and Trokel were the first to test quality of laser cuts on animal and human corneas with different wavelengths of excimer lasers [5]. In 1986 Marshall described that large areas of cornea can be ablated safely using excimer laser at wavelength of 193nm, and termed this photorefractive keratectomy (PRK). In 1985, Seiler treated first human with large area ablation to remove scarring using excimer laser [6]. McDonald treated the first sighted human eye in a refractive procedure in 1988 [7]. Others followed suit and surgeons around the world began using excimer laser to treat refractive errors in a procedure known as PRK today. 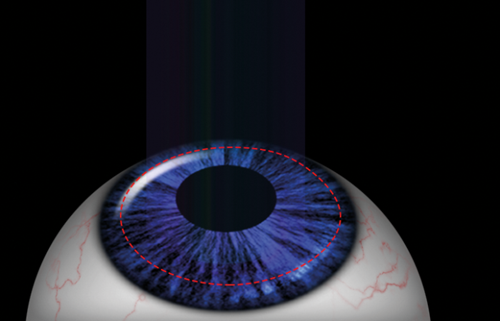 Figure 1: PRK: involves excimer laser ablation through epithelium,
Bowman’s layer and stroma (when transepithelial PRK) or after
epithelium is removed mechanically or with aid of alcohol.

PRK can be used for treatment of refractive errors from +3D to -10D and up to 4D of astigmatism. It can be performed through intact epithelium (transepithelial PRK) or following removal of the epithelium, either mechanically or with the aid of alcohol, to treat underlying cornea (Figure 1). Complications include development of haze, which is thought to result from healing processes after laser breaches the Bowman’s layer. Remodelling of epithelium following PRK is thought to be responsible for regression of refractive error. These challenges with PRK drove further innovations in surgical techniques [8].

The idea of using laser to treat cornea under a flap first started with creation of complete thin anterior caps and treating stroma underneath, followed by cap replacement [1]. Pallikaris is considered a father of laser assisted in situ keratomileusis (LASIK). He first used this term to describe a procedure of producing a hinged flap using microkeratome, rather than a free anterior cap, to allow for underlying stroma excimer laser treatment. LASIK (Figure 2) allowed for faster and painless visual rehabilitation compared to PRK, gaining instant popularity [9,10]. 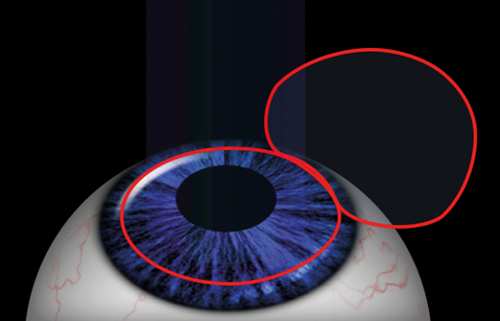 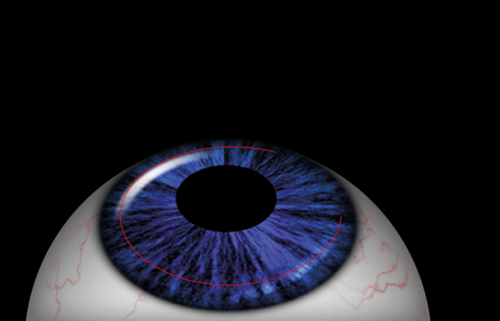 Figure 2 (Top and bottom): LASIK: Excimer laser applied on the stroma
after an anterior flap is created with a microkeratome or femtosecond laser.

Risk of postoperative haze with LASIK is lower than post-PRK. LASIK can treat higher degrees of spherical refractive error compared to PRK;(+6D to -12 D). However, LASIK introduced a host of new challenges related to flap creation like flap folds, risk of flap dislocation, epithelial ingrowth, and diffuse lamellar keratitis [11]. Further innovation in laser refractive surgery came with use of femtosecond laser, first designed for ophthalmic use by Dr Juhasz and Dr Kurtz at the University of Michigan [12]. In the 1990s femtosecond laser was used to create LASIK flaps, resulting in a procedure known as femto-LASIK. The advantages of femto-LASIK over LASIK were related to better flap adherence and less flap related complications [13]. But both procedures carry a risk of inducing post laser ectasia, a complication, which in pre-crosslinking days required corneal grafting in progressive cases. A lot of research has gone into risk stratification strategies of how to avoid post-lasikectasia, coupled with development of better imaging techniques.

“General ophthalmologists should be familiar with a myriad of available laser refractive techniques, as they are amongst the most commonly performed ophthalmic procedures.”

Realisation that LASIK reduces the biomechanical strength of treated corneas more than PRK, as well as resulting in more symptoms of dry eyes, has led to further modification of the two main techniques to combine the best of the two procedures and minimise their prospective risks.

Both laser epithelial keratomileusis (LASEK) and epi-LASIK offer advantages over their ancestral techniques; PRK and LASIK. In LASEK, epithelium is detached with the aid of alcohol, as an epithelial flap, and replaced after the procedure.

It is thought to reduce the incidence of haze and amount of postoperative pain compared to PRK, however, there is no universal agreement about these benefits. Advantages over LASIK include no flap related complications and lower risk of inducing postoperative ectasia. Epi-LASIK is essentially a superficial LASIK, where an epithelial flap is created with a microkeratome, offering the same advantages as LASEK [14]. The precision of femtosecond laser during LASIK flap creation has further allowed this technology to surpass the use of microkeratome and even excimer laser. In 2007 femtosecond lenticule extraction (FLEx) was introduced.

The principles of the procedure are the same as in LASIK, with the exception that femtosecond laser is doing all the work. It is used to create the flap and cut out stromal lenticule without the need for microkeratome or excimer laser. This technique was later modified into small incision lenticule extraction (SMILE), during which a stromal lenticule is created with femtosecond laser along a small incision side cut, through which it is removed (Figure 3). 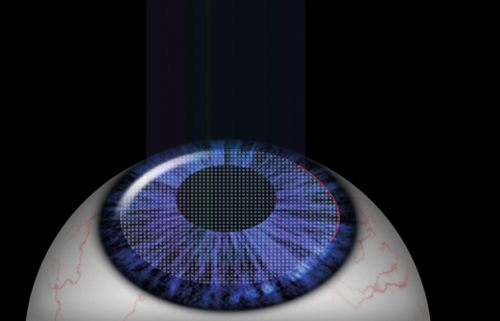 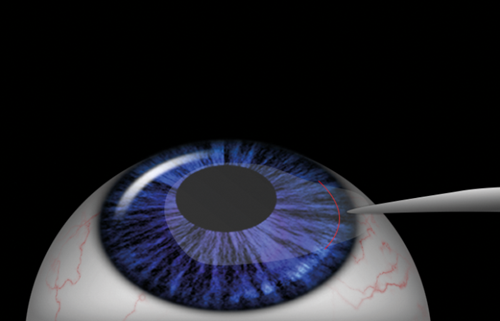 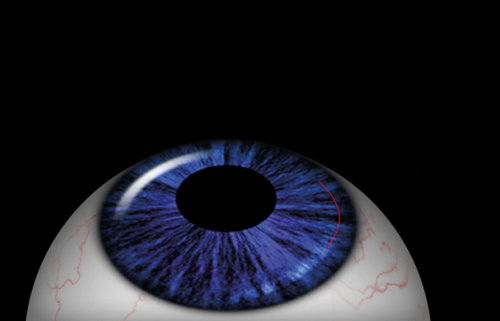 It offers advantages over both LASIK and PRK. It allows flapless surgery, has lesser effect on biomechanical strength of treated corneas, causes fewer symptoms of dry eyes, and induces less higher order aberrations compared to LASIK. It is also painless. Currently SMILE is approved for treatment of myopia up to -10D and astigmatism of up to 6D, trials are on-going to establish algorithms for hyperopia treatment [15].

Corneal refractive surgery is an evolving field, which has altered over the decades. Ideas explored almost 70 years ago by early pioneers have been made possible with the introduction of new technologies, constant re-evaluation of old and current techniques, as well as strive for perfection. Currently, refractive surgeons are spoilt for choice, given the myriad of available refractive corneal procedures. However, each treatment necessitates careful considerations of its risks and benefits, which should be customised to each patient’s characteristics. 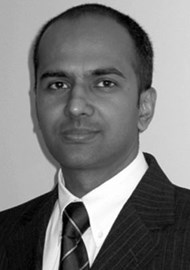