Don’t ignore the black lesion! It might be mucormycosis
By Tina Parmar

Keeping mucormycosis infection in the foreground of your differential diagnosis, especially in those more vulnerable patients, will help save their lives if recognised and managed appropriately.

Mucormycosis is a fulminant infection caused by the fungi of the family Mucoraceae. It usually affects people in an acidotic state (poorly controlled diabetics in diabetic ketoacidosis or renal failure), and the immunocompromised such as those with cancers like lymphoma or leukaemia, long-term steroid use or other immunosuppressants or a history of organ or stem cell transplant. Iron overload has also been implicated in the increased susceptibility to the disease, as there is a greater availability of micronutrients to the fungi. It is extremely uncommon in an immunocompetent individual. The fungal spores are found throughout the environment, usually within dead or decaying organic matter such as leaves, rotten wood or compost heaps, and are mostly transmitted via inhalation of the spores, but they can also be ingested or transmitted through broken skin.

The biological classification of mucormycosis is often poorly understood. Traditionally zycormycosis and mucormycosis were used interchangeably, and was defined to include any infection caused by the Order Mucorales and Entomophorales. Now, with further study on molecular phylogeny, the whole classification of the Kingdom fungi has been remodeled, and it has been found that both Mucorales and Entomophorales are profoundly dissimilar in ecologic, epidemiologic, morphologic and clinicopathologic characteristics. The pathogenic species of Mucorales cause an acute angioinvasive infection primarily in immunocompromised individuals, whereas those of Entomophorales produce a chronic subcutaneous infection mostly in immunocompetent individuals. Therefore it is incorrect to term these diseases within the umbrella name zycormycosis. Further confusion may arise by the belief that mucormycosis is an infection caused by the genus Mucor, however this is not the case, it is the infection caused by the order Mucorales. It has therefore been suggested to rename the condition ‘mucoralomycosis’ [1].

Rhinocerebral Mucormycosis is the most prolific type, and is the commonest encountered by ophthalmologists. Other forms that exist are pulmonary, gastrointestinal, cutaneous and disseminated. Rhinocerebral is the type that often affects poorly controlled diabetics, and the type that will be discussed in the remainder of this article. It usually begins in the nose and the paranasal sinuses, but can rapidly spread to nearby tissues (i.e. into the cranial and orbital cavity) via angio-invasion.

Patients with poorly controlled diabetes mellitus have reduced granulocyte phagocytic ability with an altered polymorphonuclear leukocyte response, rendering the host more susceptible to opportunistic infections. This is further complicated by peripheral vascular disease secondary to microangiopathy and atherosclerosis which leads to necrosis of local tissues. Pulmonary Mucormycosis primarily affects those with cancer or with a history of organ or stem cell transplant. Gastrointestinal Mucormycosis is a result of ingestion of the fungal spores, and is more common amongst children, particularly infants of the age of less than one month, particularly in low birth-weight or premature babies. Cutaneous Mucormycosis enters the body via broken skin secondary to trauma, surgery or burns in the immune deficient.

Disseminated Mucormycosis is widespread infection via haematogenous spread that can affect the brain, heart, spleen and skin. The Mucorales fungi might be of the Mucor species, the Rhizopus type or Lichtheimia. The Mucorales are ubiquitous in nature, but their precise ecology remains to be determined; they are thermotolerant and are usually found in decaying organic matter [1,2].

Due to the rarity of the disease, its incidence varies from between 0.43-1.7 cases per million population, but remains extremely uncommon in developed countries [2,3]. Mucormycosis is the third most invasive mycosis after candidiasis and aspergillosis, and is 10-50 times less common than the more invasive two types. Nevertheless, it does account for 8.3-13% of all fungal infections found at autopsy, and one to five cases per 10,000 autopsies performed [1,2].

As mentioned above, although occurring most frequently in immunocompromised patients or poorly controlled diabetics, HIV infection does not inherently predispose to mucormycosis unless associated with illicit intravenous drug use, neutropenia, diabetes mellitus or corticosteroids [2]. Do keep an open mind, primary cutaneous mucormycosis has been described in patients after skin trauma and burns.

Early signs and symptoms include headache and facial pain, sinusitis, nasal discharge and early ‘bruising’ or early necrosis. This can rapidly progress onto reduced vision, ophthalmoplegia, proptosis and chemosis (caused by a cavernous sinus thrombosis which complicates up to 11% of cases), endophthalmitis, serous retinal detachments, necrosis and eschar formation, as well as cerebral signs. Eschar is necrotic tissue and is distinguishable from, and must not be confused as a scab. Although not pathognomonic of the condition, black lesions of the hard palate, nasal turbinates or within the orbits must be examined for. The patient will usually be systemically unwell. 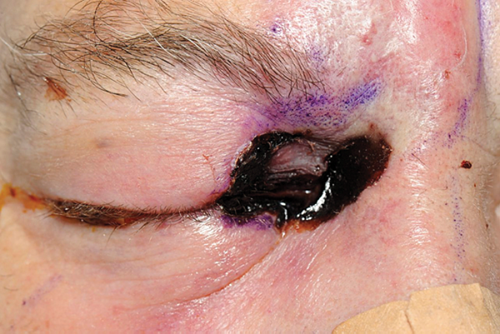 The patient presented with headaches and pain initially thought to be giant cell arteritis. He had poor diabetic control. He had a temporal artery biopsy organised and was started on high dose steroids. He returned to the medical team with worsening of symptoms. He had by this point developed diabetic ketoacidosis, he required critical care ward admission. Within a few hours he was noted to have the black lid lesion in Figure 1. He also had a relative afferent pupillary defect (RAPD) and reduced vision. Figure 2 shows his CT scan showing sinus disease. Treatment with iv Amphotericin was immediate and debridement was organised. 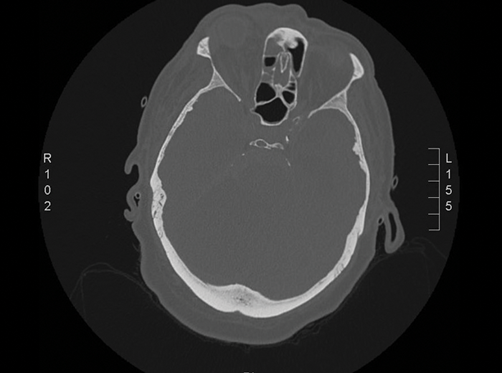 Figure 2: Axial CT head of the patient above. The CT shows opacification of
the sinuses with mucosal thickening within the right maxillary antrum.
Although not evident on this slice, the frontal sinuses were also involved.

A bedside skin biopsy was arranged, it was requested microscopy and gram stain should be carried out, this confirmed hyphae. Exenteration and debridment was carried out under joint care of the following teams: neurosurgery, maxillofacial, oculoplastic and ENT. The patient deteriorated, an urgent CT scan showed he had developed thrombosis of numerous cerebral vasculature and a subarachnoid haemorrhage. The patient did not survive this unfortunate sequelae of mucormycosis. 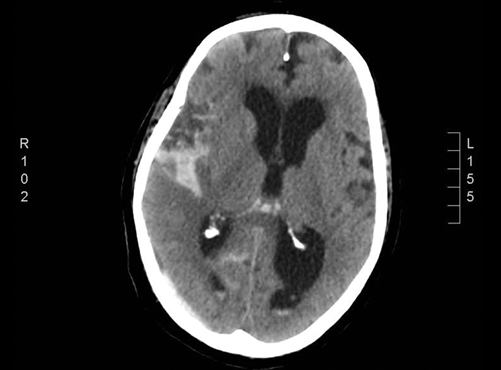 Figure 3: Axial CT head. The patient later developed subarachnoid haemorrhage
with haemorrhage in the basal cisterns, the right sylvian fissure extending to the sulci
of the right parietal lobe and the lateral ventricles.

Diagnosis is made by a tissue biopsy using either Haematoxylin and Eosin (H&E) stain or Grocott’s methenamine silver stain. The hyphae of mucormycosis are broad (5-20μm), irregularly contoured, pleomorphic, typically branch at right angles, and they cause thrombus formation within the blood vessels and ultimately necrosis. The hyphae are pauciseptate (not nonseptate, as often described), but septa are only rarely seen in tissue sections and may be simulated by folds in the hyphae. Hyphal walls are thin and usually basophilic in H&E stained sections.

The hyphae are often twisted, folded and collapsed due to their thin walls. Many hyphae have absent cytoplasm and appear clear. Grocotts’s methenamine silver stain highlights the cell walls, but H&E staining is often adequate for diagnosis.

Neuroimaging with contrast will also be very useful, not only in the diagnosis, but for the future management of the patient. Although not a rule, sinus disease should be viewed with suspicion when a black lesion is noted on the skin. Bloods, in particular inflammatory markers, may help with monitoring the progression of the disease.

A multidisciplinary approach must be taken from the offset. Involvement of the neurosurgical, neurology, maxillofacial, ENT, ophthalmology, neuroradiology, intensive care, microbiology and infectious diseases teams should all be considered.

Firstly, if any underlying risk factors can be reversed, they must be reversed immediately. Failure to correct a diabetic ketoacidosis results in an extremely poor prognosis. First line anti-fungal therapy is intravenous liposomal Amphotericin B, given at a dose of 0.8mg/kg/day infused over four to six hours. It is usually administered for four to six weeks following initial treatment to ensure complete eradication of the infection. Urea and creatinine levels should be monitored as the drug can cause renal toxicity. Posaconazole has also been shown to be an effective agent against mucormycosis, perhaps more so than Amphotericin B, but Amhpotericin is still currently the main treatment of choice. Isavuconazole has also been used.

“If you see a black lesion, or what looks like an unexplained bruise (early necrosis), DO NOT ignore it.”

Surgical debridement of the skin, orbit and sinus tissues involved should also be performed, including irrigating with Amphoteric B. Delay in debridement leads to rapid progression, and therefore any suspicion of mucormycosis infection should be explored immediately. If the globe is involved then exenteration should also be performed. Mucormycosis is known to spread haematogenously and cause infarction and thrombosis in the cerebral and other tissues, hence early debridement is important.

Hyperbaric oxygen has been said to play a role in the treatment as higher oxygen pressure increases the ability of neutrophils to kill the organisms.

Although a rapidly progressive, life-threatening fungal infection, if diagnosed and treated both medically and surgically within a timely manner, survival rates have been thought to exceed 80%. Unfortunately, patients with AIDS have a mortality of up to 100% [2,3]. Keeping mucormycosis infection in the foreground of your differential diagnosis, especially in those more vulnerable patients, will help save their lives if recognised and managed appropriately. Moreover, if you see a black lesion, or what looks like an unexplained bruise (early necrosis), DO NOT ignore it.

In the scenario of a high risk patient (diabetic ketoacidosis, immunosuppressed, immunocompromised) patient with what looks like a preseptal cellulitis / orbital pathology, always have mucormycosis as a possibility and remember to look for black lesions on the hard palate. Importantly, the differential for a black lesion also includes the serious necrotising fasciitis. 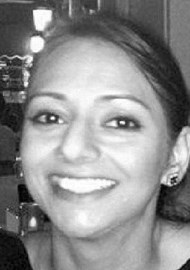