A brief history of colour vision
By Andrew Want

Andrew Want takes a look at how colour vision has evolved in humans and animals and how it differs across species.

Colour vision is something that we often take for granted, but it has become so intrinsic to the way we perceive the world that it has permeated our culture and language. We describe people as feeling blue, seeing red or being green with envy. From an evolutionary perspective, the benefits of colour vision are substantial. It can help you find food and see when fruit is ripe to eat, and it can help warn you of danger by spotting predators.

Colour vision can also help with communication by detecting flushing of skin that can be linked with certain emotions. The range of colours and wavelengths of light that humans can detect is from 400–700nm and often referred to as the visible spectrum. But it is important to remember that this is only our visible spectrum. And many other animals are able to see wavelengths of light in the ultraviolet and UV range. This allows them to see entire worlds that are invisible to us.

The beginning of colour

There is a huge variety in the structure of eyes across different animals, however, there are some common elements. PAX genes, in particular PAX6 is essential for eye formation. Similarly the photoreceptors of all eyes are made up of some combination of retinal (vitamin A) and an opsin. Both PAX genes and opsins appear to pre-date the development of vision [1-3], and were then modified and incorporated for this new purpose.

In order to progress from the simple image forming eyes of early life to those that can produce colour vision, an animal must be able to have a visual system that can discriminate between different wavelengths of light. This requires the development of a range of photoreceptors. Subtle variations in the opsins of these photoreceptors can cause differences in peak sensitivity, allowing different ranges of colour vision between species.

Analysis of photoreceptor opsin genes from multiple species suggests that opsin genes belonging to five families specify all vertebrate photopigments. One of these is linked to rod pigments, whereas the other four are linked to cone pigments. All four of the cone opsin genes are thought to have emerged some time early in vertebrate evolution around 540 million years ago (Mya) [4,5].

The first image forming eyes are thought to have developed somewhere around 520 Mya. However colour vision seems to have developed slightly later. It is difficult to determine exactly when this development happened because, apart from some parts of the optical system such as the calcified lenses of trilobites, other soft tissue components of the visual system decay rapidly after death and are therefore not preserved in fossils.

However, in certain rare circumstances, it can be possible. The earliest evidence of colour vision was found in a fossil of Acanthodes bridgei [6]. This was a fish belonging to a group known as Acanthodii, meaning ‘spiny sharks’, that was widespread around 400 to 280 million years ago. A particular fossil from the Upper Carboniferous formation (around 300 Mya) was found in Kansas, USA and was remarkably well preserved. The fossil showed skin, articulated cartilages and well preserved eyes.

Close examination of the eyes discovered the presence of rod and cone cells, suggesting that A. bridgei had colour vision. The ratio of rod and cone cells, as well as the presence of a retinal pigment epithelium also suggests that this was a diurnal system, with cone-dominant vision during the day, and rod-dominant vision during dim light. This can be inferred from the structural similarities with other animals alive today. Since this first breakthrough into the world of colour, eyes have continued to develop to become more complex and form more detailed images. And the ability to use colour vision has also evolved.

In animals today, birds, reptiles and fish typically have four types of cone photoreceptors [7]. Most mammals typically have two, with the exception of some primates, including humans, who have three. A closer look at the different cones seen in animals can give some insight into how these different arrangements have developed.

The first true mammals evolved during the Early Jurassic period around 200 Mya. From fossils around this time, it is thought that these early mammals were small and likely nocturnal. Being active at night meant there was more of an advantage in developing a visual system that could function in low light, that did not rely on colour vision, so mammals eventually lost two of their cone cell photoreceptors [1].

Modern birds and reptiles, however, are thought to have evolved along a different branch of the evolutionary tree and therefore retained their complex colour vision. Humans and other catarrhines (Old World primates) are trichromats with three cone photoreceptors. These receptors are often referred to as Short (S, blue), Medium (M, green) or Long (L, red), referring to the respective wavelengths of their peak sensitivities. However, the sensitivities of these receptors are noticeably different from those found in reptiles and birds. The M and L cone pigments in humans have absorption peaks that are relatively close together at 534nm and 564nm. The S pigment has a peak sensitivity as a notably shorter wavelength of 420nm [8] (Figure 1). 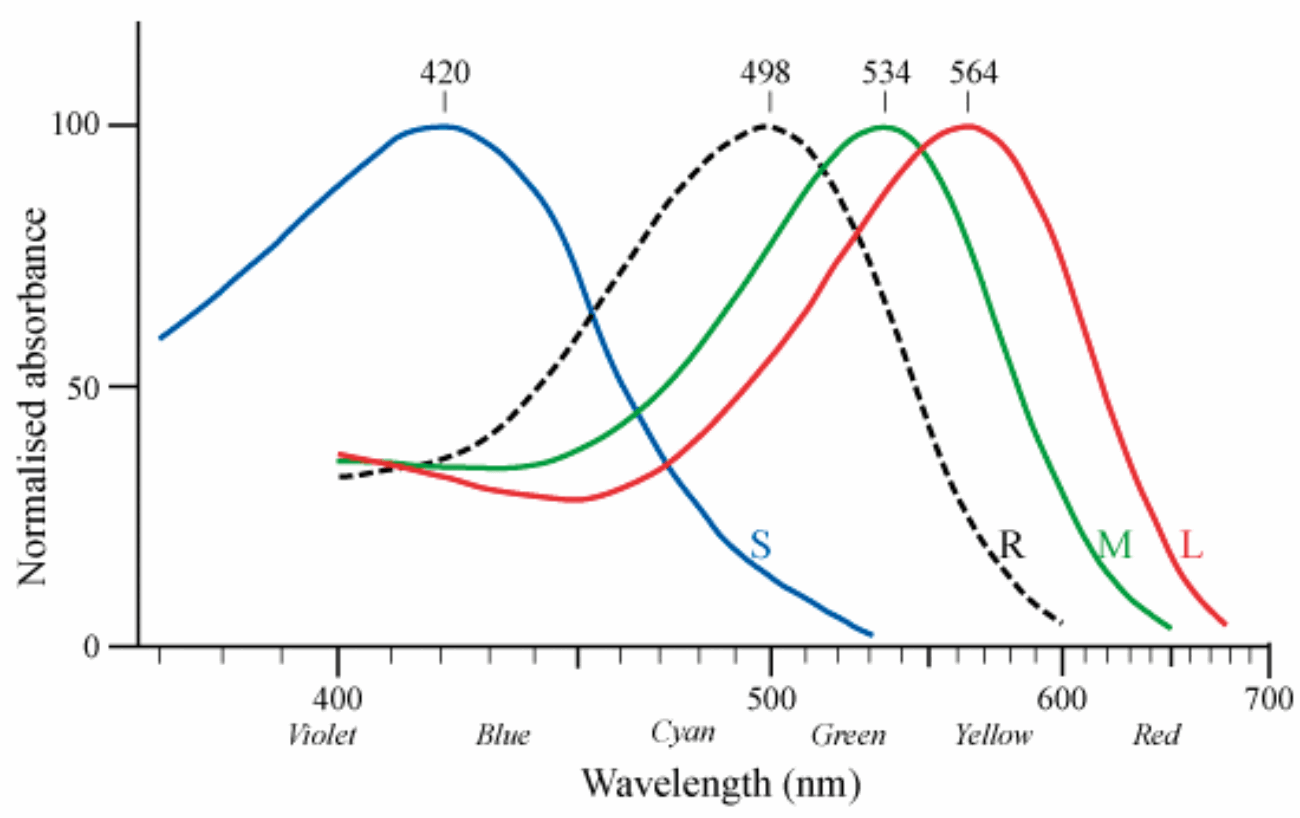 In contrast, the distribution of cone absorption peaks in birds and reptiles is far more evenly spread across their visible spectrum often with an additional photoreceptor sensitive to ultraviolet light [9] (Figure 2). 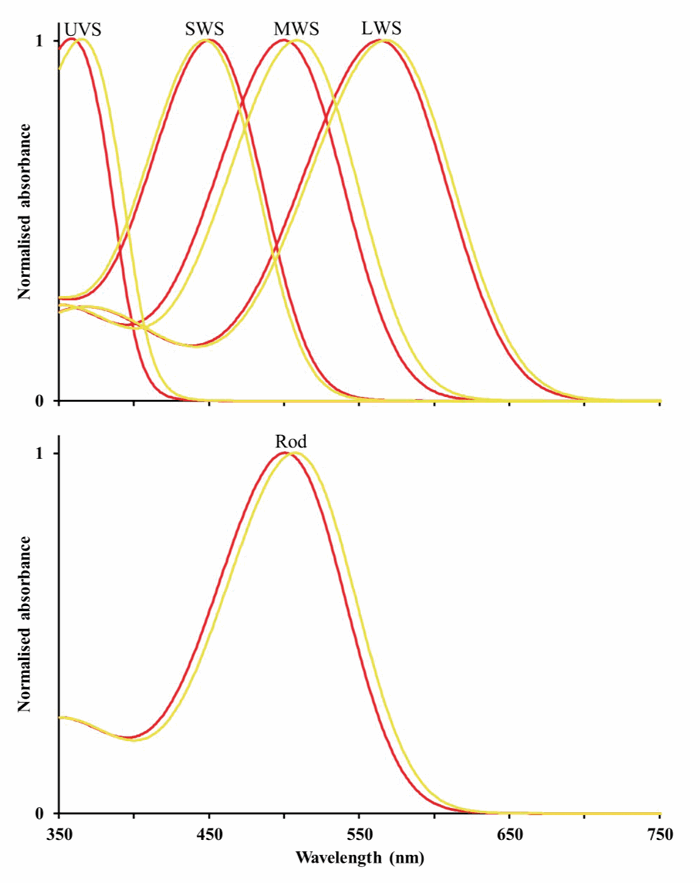 The location of the M and L cone pigment genes may help to give some clues into the reason behind this. Both M and L genes are found on the X chromosome, relatively close together. The gene for the S cone pigment is from the SWS1 gene family, located on chromosome 7. It is thought that, as with the earlier mammals, our evolutionary ancestors were dichromat with only two cones. At some point around 30-40 Mya a duplication of the X-chromosome opsin gene occurred [10], as well as a subsequent change in the wavelength of peak absorption of one of these copies. The combination of these changes allowed for the formation of a new group of cone cells, sufficiently different from the others to allow colour vision. This arrangement is common to all catarrhines, in contrast to platyrrhine monkeys or New World monkeys that are mostly dichromat [11]. However, in several species this seems to be changing.

Platyrrhine monkeys includes spider monkeys and marmosets. They have wide and more varied arrangement of opsins and colour vision. Several species have only two types of cone photoreceptor giving them dichromatic vision, or in some cases only one type. However, many Platyrrhine monkeys have polymorphic colour vision. There are multiple alleles of the M/L-cone pigments seen in different individuals, each of which has slightly different peak sensitivity.

As this opsin-gene is located on the X-chromosome, this polymorphism has an interesting effect. All males and homozygous females have dichromat vision, expressing two types of cone photoreceptor. However, the heterozygous females, with any pair of the M/L alleles are able to have three types and therefore achieve trichromatic colour vision [11]. This creates a fascinating situation where there are not only differences between individuals regarding whether they have dichromatic or trichromatic vision, but there are variations of the type of trichromatic colour vision between the different heterozygous females. Behavioural studies have demonstrated that there is a predictable phenotype of colour vision based on the type of pigment array [12]. Similar to humans, howler monkeys have two different X-chromosome opsin genes, with cones expressing S, M and L pigments. They are thought to be the only Platyrrhine monkeys to have achieved species-wide trichromatic colour vision.

More than just the cones

While most birds and reptiles have four different cones, humans have three. Other mammals often have two or fewer, especially in those who are nocturnal and evolution has steered them towards developing vision in the low light of night, rather than colour. 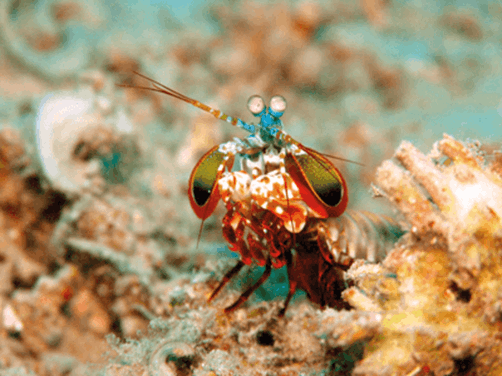 The peacock mantis shrimp (Odontodactylus scyllarus) (Figure 3) has some of the most complex eyes in nature. It has two compound eyes on stalks, and a central band across each eye means that each one has trinocular vision independently, by focusing incoming light with three separate regions. This central band is also the area that allows the mantis shrimp to see in colour, and can contain around 12 types of photoreceptor [13]. This includes vision in the UV range and is thought to be valuable to the shrimps as they can communicate using ultraviolet patterns reflecting off their bodies.

For most animals, it is variations in the opsins that create the different types. The mantis shrimp is able to achieve the great variation by combining a smaller number of opsins with UV-blocking substances called mycosporine-like amino acids (MAA). The different types of MAAs block slightly different wavelengths of UV light and so combining these with different opsins can create a huge range of receptors [14].

In theory this may help the mantis shrimp to have high quality vision with minimal processing time, which may be of benefit as an ambush hunter. The mantis shrimp not only has the most complex eyes known in the animal kingdom, but also boasts the world’s fasted punch that can hit with the force of a bullet [16], which is uses to break the shells of its targets, and even aquarium glass on some occasions.

The reasons for the complexity of the mantis shrimp’s eyes and how it processes the information to form images are far from understood. However, it does demonstrate that forming complex colour images is not just down to the number of photoreceptors an animal possesses. Humans, like other animals, have also developed complex circuitry to help process the input they receive from the photoreceptors.

There is some overlap in the wavelengths of the light that different photoreceptors can detect. Therefore, it is more efficient to detect differences between respective receptors than to process the individual responses. This is how we are able to see such a wide variety of colours with only three different types of cone photoreceptors. It was initially proposed by Thomas Young (1802) and then further refined by Hermann von Helmholtz (1866) and known as the Young-Helmholtz theory of trichromacy [17]. There are several different configurations of S, M and L receptors that combine in this way. It is achieved by the complex network of interactions between photoreceptors, bipolar and horizontal cells, as well as processing in the lateral geniculate nucleus and the visual cortex [17,18].

The German physiologist Ewald Hering who described the opponent-process theory (1878) furthered our understanding of this process [19]. He proposed that perception of colour by comparison between sets of colours. Red versus green, blue versus yellow, and dark versus light, with the colours in each pair being antagonistic to each other (yellow stimulus is achieved by the relative stimulation of red and green photoreceptors) [20].

With this arrangement, exposure to red wavelengths would cause an excitatory response in red receptors, and an inhibitory response in the green. This can help to explain the formation of negative afterimages, when a stimulus of one colour is presented, the opponent colour is seen when the stimulus is removed.

Further investigations into the circuitry of the retina and the pathways involved throughout the visual pathway are continuing to reveal how beautifully complex and intricate the systems behind our interpretation of colour vision are. Not only does this ability help us to navigate the world around us, but by uncovering the underlying mechanisms, we can get an insight into our history as a species, and the connections we have to others. 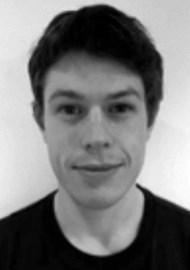