The stress multiplies when a walk-in or referred case is suspected of underlying neurological pathology. Often, panic motivates on-duty clinicians to investigate the patient using all modalities available with little to show for it.

Potentially grave conditions are missed due to the variability of their presentation rather than complexity of these cases. Neuro-ophthalmic emergencies exhibit signs that range from subtle and non-specific headaches, to dramatic, such as total blindness. Though such symptoms may appear random, there are clues and characteristic signals which may help in devising a guided pathway based on clinical suspicion.

Pupil reaction:
Involved in cases of secondary AION or asymmetric

Optic disc:
Bilateral but could be asymmetrical optic disc swelling

Visual acuity:
Unilateral, could be profound with mild pain on ocular motility

Optic disc:
Papilloedema, asymmetrical, with or without pre-papillary haemorrhages

Targeted investigations carry higher probability of a positive result than generic testing (like looking for a needle in a haystack). Once nudged towards the correct diagnosis, the following imaging and haematological investigations may be applied for confirmation of the working diagnosis.

C-reactive protein (CRP) and erythrocyte sedimentation rate (ESR) elevation (in absence of steroid / immune suppressive therapy) with thrombocytosis, normocytic anaemia and leukocytosis carry high level of sensitivity. Temporal artery biopsy (TAB) is the accepted universal standard. A negative TAB generally rules out giant cell arteritis (GCA). However, GCA is a clinical diagnosis and if clinical suspicion is high then patients can be treated with the support of rheumatology colleagues’ opinion. ESR and CRP might be normal in up to 14% of TAB positive cases. Colour Doppler imaging is an emerging noninvasive diagnostic tool that can provide some help in diagnosis [1].

Most patients have a history of known pituitary lesion but some present acutely with the apoplexy. Magnetic resonance imaging (MRI) is the investigative tool of choice though occasionally in cases of pituitary haemorrhage it may fail to delineate the lesion. If clinical suspicion index is high, MR angiogram should be performed [2].

For infectious cases such as rhino-orbital mucormycosis (ROM), diabetes is a major driving factor with, ketoacidosis recorded in half of the cases. Computed tomography (CT) scan and MRI (fat suppression) carry high sensitivity. Rarely imaging may be negative and diagnosis requires paranasal sinus biopsy as the condition seldom occurs without ethmoidal sinusitis [3].

Headaches are usually a feature and most patients will have papilloedema in CSVT. High-resolution contrast-enhanced CT and / or MRI are ideal investigations. Serial imaging may be required as initial scans are generally normal. Haematological parameters are useful in diagnosis of septic cases.

Digital subtraction angiography (DSA) is the gold standard diagnostic test, especially for aneurysms below 3mm, although it carries risk of neurologic morbidity.

Current neuro-ophthalmic opinion is to investigate all III CN palsies as posterior communicating aneurysm (PCA) unless proven otherwise. MR angiography and CTA are still the most widely used tests, carrying sensitivity of up to 95% [5].

MRI (indicative of white matter plaques) is the gold standard for diagnosis. Additional evidence may be garnered by cerebrospinal fluid (CSF) analysis (oligoclonal bands on protein electrophoresis; sensitivity 95%). Neuro-myelitis optica spectrum disorders (NMOSD) exhibit antibody response against Aquaporin-4 and myelin oligodendrocyte glycoprotein (MOG). It is really key to identify cases of NMOSD early as they carry worse prognosis and they are usually steroid responsive, hence the need for urgent evaluation and treatment [6].

It is really important to recognise these cases urgently and refer to neuro-surgery for CSF shunting procedures if there is evidence of visual function loss or rapid deterioration. Milder cases of IIH can present with subtle optic nerve swelling and in these cases further investigations such as ultrasound B-scan (Crescent sign, optic nerve sheath extension) and MRI (tortuosity of optic nerve with sheath extension) can be useful [7].

These are some cases seen in our emergency department with uncharacteristic presentations or investigative profiles where it was important to recongnise the variability in presenting features in order to reach the correct diagnosis: 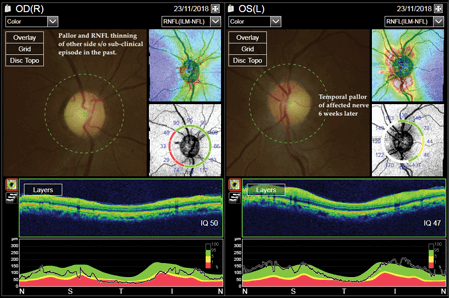 Figure 1: OCT scan of patient at six weeks follow-up indicating bilateral optic discs with temporal pallor.
Surprisingly RNFL thinning is observed on the right side (rather than the affected eye)
suggestive of a possible sub-clinical episode in the past. 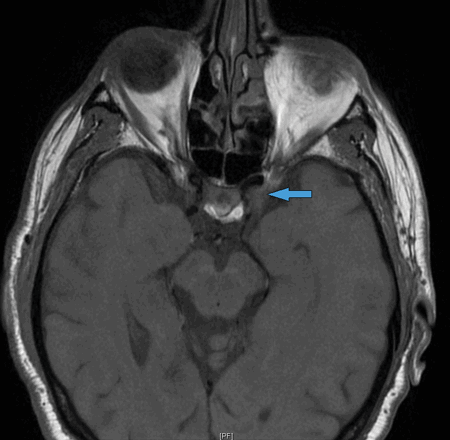 Figure 3: OCT scan of patient at presentation indicated mild swelling of
non-crowded right optic disc with normal appearance on the left side.

Neuro-ophthalmic disorders may not always display textbook features but the basic underlying defect leaves a trail of recognisable bread crumbs.

Exhaustive history and thorough clinical work-up are required to formulate a clinical suspicion rather than indiscriminate and often unnecessary investigations which may blind-side the true diagnosis.