Central retinal artery occlusion (CRAO) is a rare but devastating vascular episode that can have severe impact on vision. Treatment is very time-limited and needs to be initiated very quickly to salvage any vision.

Time is crucial in these cases and the visual outcome depends on how quickly the cause of vision loss is identified and the treatment is initiated from the time of the start of the symptoms. Furthermore, it is important to identify the risk factors or the cause of the retinal artery occlusion and promptly refer the patient to the stroke team to minimise any other vascular events [1]. 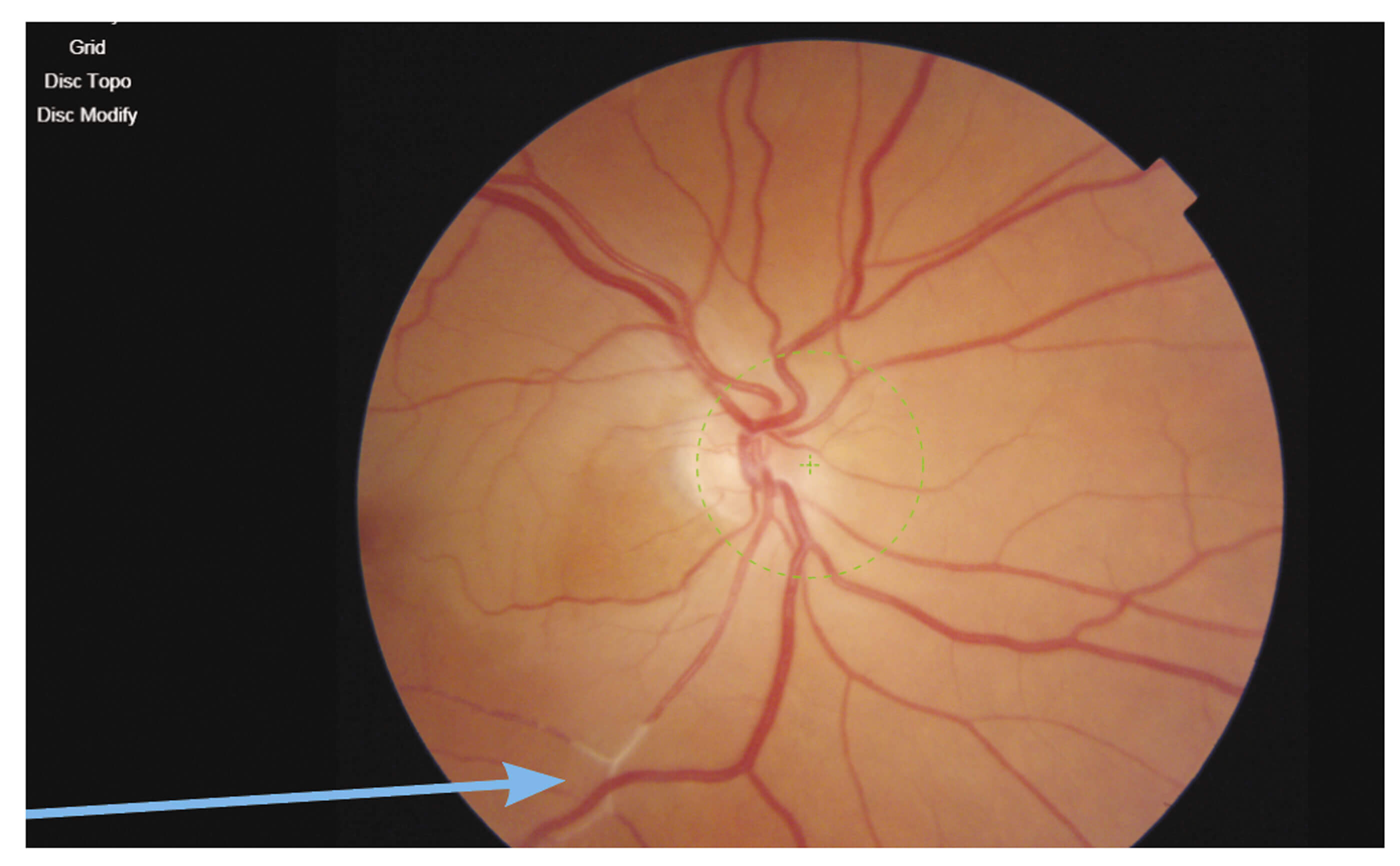 A 75-year-old gentleman attended the emergency eye department complaining of sudden painless loss of vision in the right eye for approximately two hours. He presented very early following the onset of his symptoms as he had a similar episode to his left eye few weeks ago and on that episode he was told that if this affects his right eye, he needs to present to the emergency eye clinic as soon as possible. At the emergency clinic, he was immediately triaged and identified as being at risk of CRAO. As such, he had bloods to exclude giant cell arteritis (full blood count, erythrocyte sedimentation rate and C-reactive protein) and was prioritised to be seen. On examination Right eye visual acuity was 1.46(LogMar). On fundoscopy he was found to have a pale ischaemic retina, confirmed on OCT scanning. He was also noted to have a thrombus as shown in Figure 1, which confirmed the diagnosis of CRAO. He was immediately treated with intravenous acetazolamide 500mg, oral acetazolamide 500mg, topical Cosopt, Iopidine and Xalatan, oral aspirin 300mg, ocular massage and rebreathing in a bag. 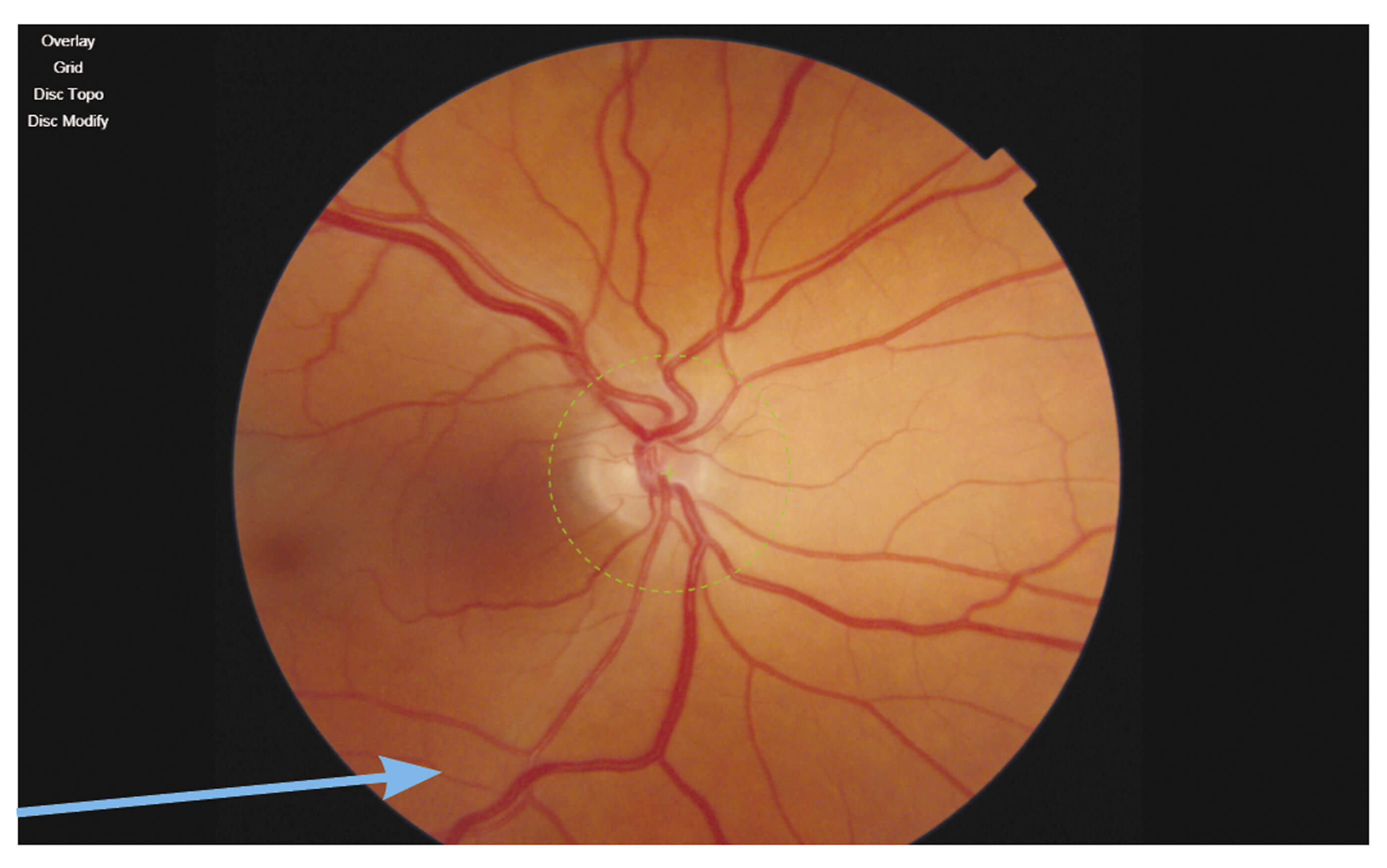 An hour after treatment the patient felt improvement of his visual acuity and reduction of the size of the scotoma he presented with. He had repeated fundoscopic examination and clinical imaging to check the position of the thrombus. The thrombus had dislodged as shown in Figure 2, and the retina had re-perfused (Figures 3 and 4). Visual acuity was rechecked as LogMAR 1.06 (6 metres). Blood tests were found to be normal and after discussion with the stroke team the patient was referred urgently to the stroke team and follow-up was planned in the medical retina clinic. 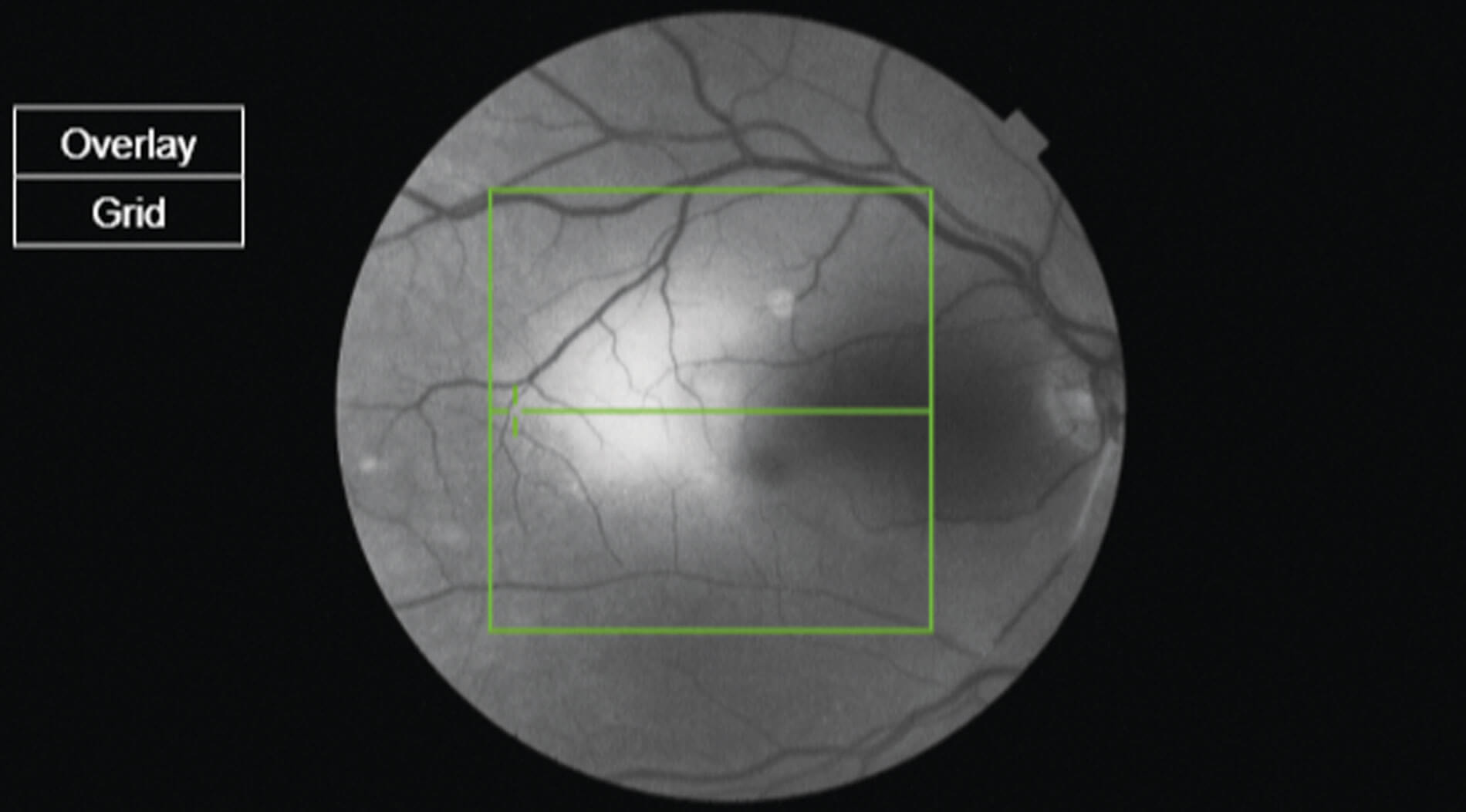 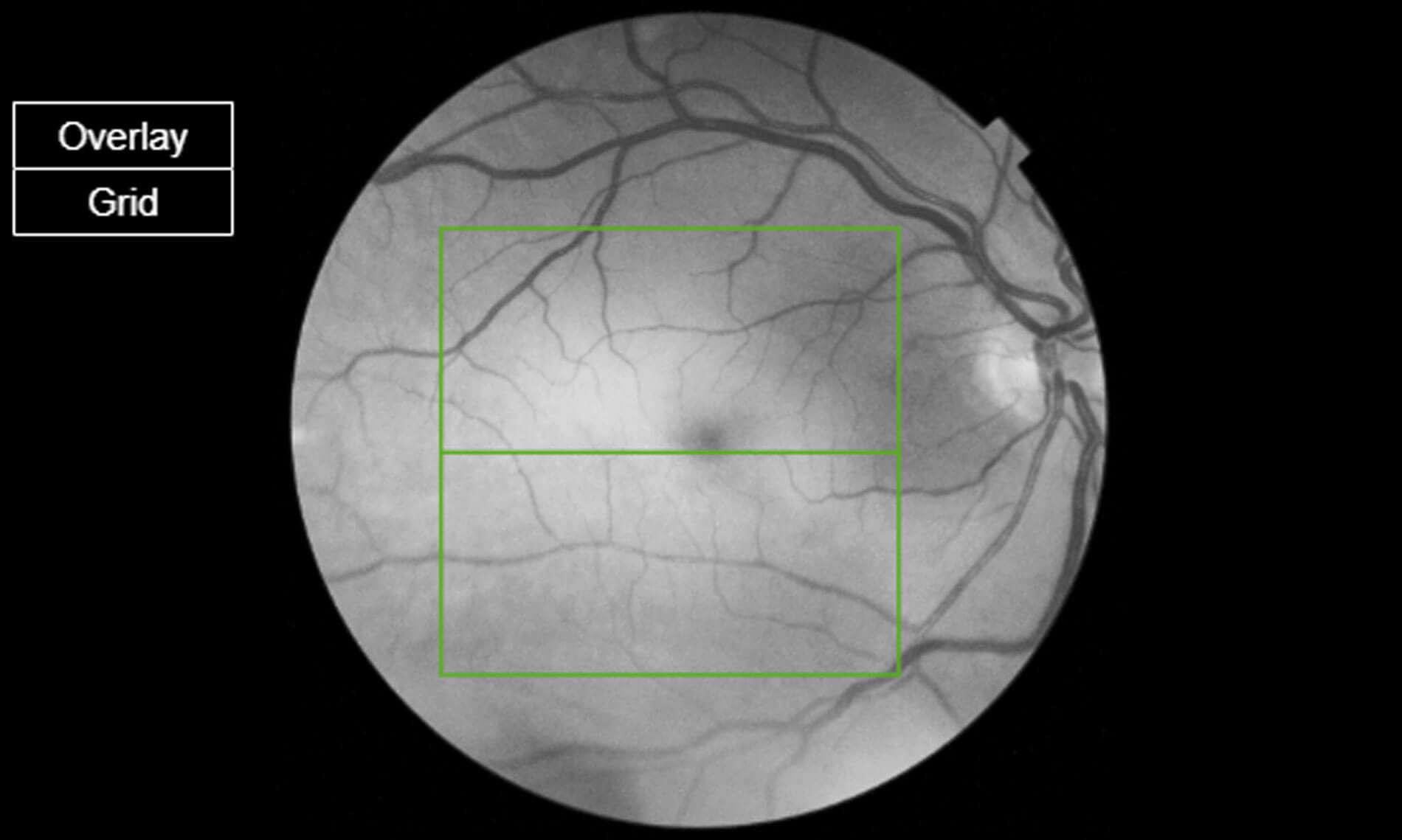 Figure 4: Red free image of the right macula following reperfusion showing improvement
of the oedema and reduction of the abnormal signal.

CRAO is an ocular and medical emergency. Patients present with a sudden onset of painless, monocular loss of vision [2]. The incidence of CRAO is approximately 1 to 2 in 100,000, with a male predominance and mean age of 60-65 years [3].

The retina receives its blood supply from two sources, the inner retina is supplied by the central retinal artery and the outer retina is nurtured by the choriocapillaris [2]. Both these circulations originate from the ophthalmic artery and they both need to be intact to maintain the full function of the retina [3].

A cilioretinal artery is present in 15-30% of the population and this can spare some vision at the macular area, however, peripheral vision is affected [3].

The major risk factors of CRAO can be divided into non arteritic and arteritic [2]. Carotid artery atherosclerosis is the most common cause of non arteritic CRAO, which is frequently associated with hypertension, diabetes, or both [3]. Other causes of non arteritic retinal artery occlusion include cardiogenic embolism, haematological conditions, and other vascular diseases. CRAO of arteritic aetiology is mostly caused by giant cell arteritis, where an embolism can arise from an inflamed proximal vessel [2].

A careful history taking with emphasis on systemic conditions and identification of the risk factors is vital for the diagnosis and long-term management. Patients who are less than 40 years of age with no known systemic risk factors should be investigated for systemic vasculitis, sickle cell haemoglobinopathy and other hypercoagulable diseases [3].

In our patient, the very early presentation to the emergency eye clinic due to a similar episode in the other eye, along with quick assessment and examination, the presence of a positive relative afferent pupillary defect and the whitish, oedematous retina, which is most obvious at the posterior pole giving rise to the characteristic cherry-red spot at the fovea, helped in the confirmation of the diagnosis of CRAO.

As highlighted in our patient’s case, a retinal embolus may be visible in 40% of patients.

CRAO is the ocular analogue of a cerebral stroke and the clinical approach and management are relatively similar to the management of stroke if the patient has presented within four hours [4]. Initially, the acute event is treated, the site of vascular occlusion is identified and measures are taken to prevent further occurrences [1]. Hence a multidisciplinary team approach is crucial for a good prognosis of visual outcome and general health.

In our patient a good outcome was achieved because he presented to the emergency eye clinic within two hours of initial symptoms and the examination, investigations, diagnosis and immediate treatment was commenced within four hours. For any treatment to be potentially effective in CRAO, it must be initiated as quickly as possible but ideally within four to six hours of onset. None of the therapies used in our case have been shown to be effective if there is delay in patient presentation or treatment. However, in some cases partial recovery may be possible if ischaemia is reversed within four to six hours. Therefore, despite the grim prognosis for CRAO, efforts to restore vision should be instituted, preferably within the first 24 hours of symptoms.

Another important aspect of managing retinal artery occlusion is to identify and manage risk factors that may lead to other vascular conditions [5]. Hence, patients with CRAO must be evaluated promptly for stroke to minimise secondary ischaemic events [4]. When patients present within the first four hours of symptoms, it is advisable to discuss individual cases with the local stroke team to check if it is possible to perform thrombolysis depending on the local guidelines and availability of services.

I read with great interest the article Time is vision in central retinal artery occlusion by Jiney Edward which rightfully highlights the importance of early diagnosis and management of central retinal artery occlusion (CRAO). The patient was lucky at this instance as he presented to the eye casualty within two hours of onset of symptoms as “he had a similar episode to his left eye few weeks ago and on that episode he was told that if this affects his right eye, he needs to present to the emergency eye clinic as soon as possible”. The author has refrained from commenting much about the other eye like the diagnosis for the other eye, current vision and why he wasn’t already on aspirin and under Neurology after his last visit.

The article includes the patient’s fundus picture which shows a large embolus (not “thrombus” as stated) along the inferotemporal vascular arcade. Embolism originating from atherosclerotic plaques within the carotid artery or heart is the commonest cause of CRAO.1 Studies show that the most common location of occlusion of central retinal artery is more proximal, at the site of piercing the dural sheath of optic nerve or at the lamina cribrosa.2  The embolus in the fundus picture is more likely to cause a Branch Retinal Artery Occlusion (BRAO) than a CRAO. Lastly, a Fundus Fluorescein Angiogram would have shone a lot of light on the diagnosis and extent of ischaemia in both eyes. 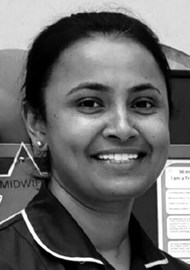