Thyroid eye disease (TED) is an auto-immune condition, in the initial phase there is lymphocytic infiltration and oedema of the extraocular muscles with deposition of glycosaminoglycans and hyaluronic acid and adipogenesis, which can lead to an increase in the volume of the contents of the orbit with resultant proptosis and raised intra-orbital pressure. After the inflammation has subsided there may be fibrotic change in the orbit with tightness and restriction of movement of the extraocular muscles. The inferior rectus is most commonly affected followed by the medial and superior rectus. Involvement of extraocular muscles may be bilateral or unilateral. Sometimes only one muscle is affected. It is not known why some muscles are more commonly involved than others.

The presence of lid-lag or lid retraction in an adult presenting with a recent onset of strabismus is highly suggestive of TED. Thyroid function tests are usually diagnostic, but a small proportion of patients with TED have normal thyroid function tests. Patients with TED are assessed for disease severity and activity and treatment in the form of immunosuppression is given depending on the degree of disease activity according to a clinical scoring system. MRI scan of the orbits, particularly short tau inversion recovery (STIR) sequence is useful in gauging disease activity and demonstrating muscle involvement and optic nerve compression. Patients should be advised to stop smoking since smokers with TED are twice as likely to need strabismus surgery. Systemic steroids are prescribed with or without additional immunosuppression in the form of Azathiaprine or Cyclosporin or low-dose radiotherapy. It is widely observed that strabismus surgery is now carried out less frequently over recent years in TED patients as a result of better medical management.

Surgery for strabismus in TED should not be carried out until the condition has become inactive and any orbital decompression has been performed. Patients who have already had a prolonged course of treatment and who are disabled by diplopia are understandably keen to have their strabismus corrected as soon as possible. However, measurements of the strabismus should be stable for at least six months prior to surgery. Eyelid surgery should be delayed until after strabismus surgery. Some authors advocate the use of Botox in the acute phase and prisms can be helpful if there is a small deviation.

At surgery the affected extraocular muscles are usually tight and fibrotic. Gaining access to the muscles can be challenging. Following decompression muscles may be incarcerated in bone. Where a deviation has increased significantly following decompression it is advisable to repeat the MRI scan of the orbits.

Surgery is carried out with the patient paralysed under general anaesthetic and an experienced assistant is helpful. A forced duction test should be carried out in order to assess the tightness of all the muscles. A Fison’s retractor may help to expose the muscle. Sometimes when the muscle is very tight it may be necessary to divide it using a scalpel while protecting the globe with the squint hook. The position of the muscle insertion should be measured prior to dividing it and again after division. The insertion of a very tight muscle may move up to 2mm anteriorly after division of the muscle and unless this is recognised the muscle may be under-recessed. Surgery amounts to recession of the tight muscles so as to maximise the area of binocular single vision; resection is rarely carried out. Some authors advocate fixing the recessed muscle in the ‘relaxed muscle position’; this is where the muscle lies during surgery with the eye centrally placed [1].

This technique also has the advantage of reducing the amount of surgery on each of the vertical muscles, thus limiting the amount of surgically induced upper and lower lid retraction. There are no published randomised controlled trials comparing adjustable and non-adjustable sutures. Recession of an inferior rectus muscle usually results in 3-4 prism dioptres of effect per mm of surgery. When recessing a vertical muscle, it should be sagittalised, that is moved in a nasal direction by half an insertion width in order to reduce the ‘A’ or ‘V’ pattern induced by weakening its adducting power. Recession of a vertical muscle carries the risk of exacerbating lid retraction since there are fibrous connections between the superior rectus and the levator complex in the upper lid and the inferior rectus and the lower lid retractors.

At the time of strabismus surgery it is advisable to divide these fibres as far posteriorly as possible. Conversely, recessing a tight inferior rectus may reduce the extent of ipsilateral upper lid retraction where this is due to Hering’s law and secondary to increased tone in the superior rectus. Several authors advise aiming to under-correct a vertical deviation to allow for a late over-correction. The aim should be to achieve single vision with both eyes in about 10 degrees of downgaze. This facilitates reading and walking down steps while requiring only a minimal chin-up head position for distance vision. Despite aiming for under-correction and avoiding the use of adjustable sutures late over-correction can still occur and patients must be warned that it may require more than one operation to achieve an acceptable result. The presence of incyclotortion may be indicative of a tight superior oblique which can be confirmed by a traction test at surgery. Where there is no excyclotortion in the presence of a tight inferior rectus muscle a tight superior oblique should be suspected and if present it will be tight on traction testing following division of the inferior rectus and per-operative measurement will show incyclotortion. The tight superior oblique should be recessed [3].

Patients’ expectations have to carefully managed: it is usually possible to achieve single vision in the primary position with or without the aid of prisms in one operation, however, the patient may have to get used to moving their head in order to have single vision in other directions. Fortunately many patients develop an impressively large fusion range which helps to reduce their diplopia. Patients need to be warned that their proptosis and lid retraction may become more noticeable after strabismus surgery: recession of two tight rectus muscles may lead an increase in proptosis of 2-3mm.

Strabismus surgery in TED should be carried out once the disease is inactive and after any orbital decompression. Measurements should be stable for at least six months. Recession of those muscles that are tight on forced duction test using adjustable sutures brings about the best results. The use of adjustable sutures on the inferior rectus is probably best avoided. Patients should be encouraged to have realistic expectations since binocular single vision may not be achievable in all directions of gaze and lid retraction may be made worse by surgery. 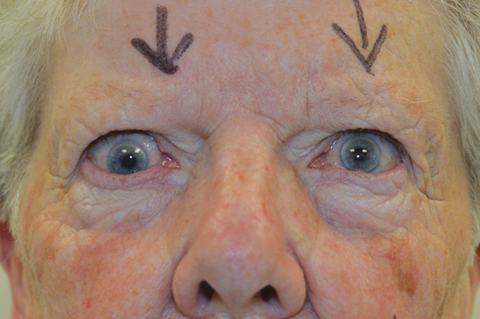 There was also moderate limitation of right upgaze. The strabismus remained stable and nine months later she had surgery. Forced ductions showed a very tight right inferior rectus. Surgery comprised recession of the right inferior rectus by 6mm and recession of the left superior rectus by 3mm using adjustable sutures. Following surgery, there was no diplopia and the right hypotropia had reduced to 10 prism dioptres. No adjustment was made. Three months later the right hypotropia had reduced further to 1 prism dioptre. There was some increase in the left upper lid retraction but this was not troublesome. She was symptom-free, there was no diplopia for near or distance and she was very pleased with the outcome (Figure 2). 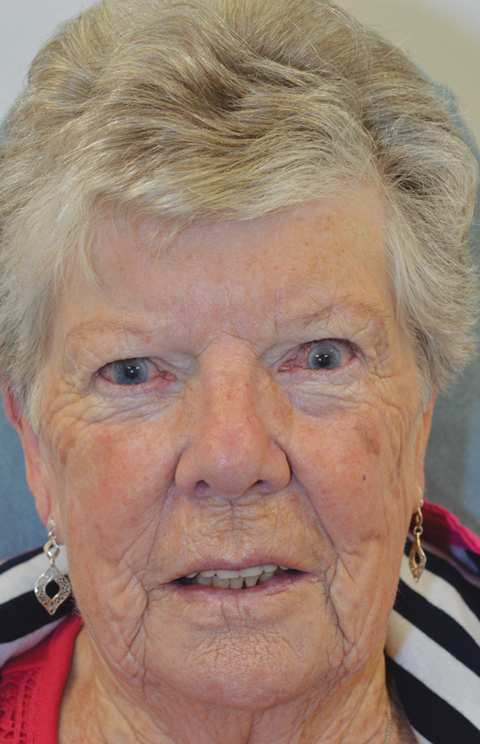