Take this waltz
By Tim Bracey

My last weekend on-call was the busiest I can remember for a very long time. We were just completely swamped with patients. The weather was not too good that Saturday and it felt like every second inhabitant of our ocean city and surrounding areas thought “let’s go and see the eye specialist for a change.” However, as it turned out, my very last patient on that long day was one of the more serious cases, being referred for a right-sided visual decline over the last few days.

He was a gentleman in his early 40’s accompanied by his wife and two lovely children, who were excited that finally after hours of waiting something was happening. He seemed very relaxed if not a little lethargic, complaining of a two to three day history of reduced vision to the right eye, which I measured to be 1/24. He also complained of a headache with nausea and vomiting since that morning. He was started on antibiotic treatment for chronic sinusitis four months ago and it was around this time he noticed that his right eyeball seemed a little prominent. 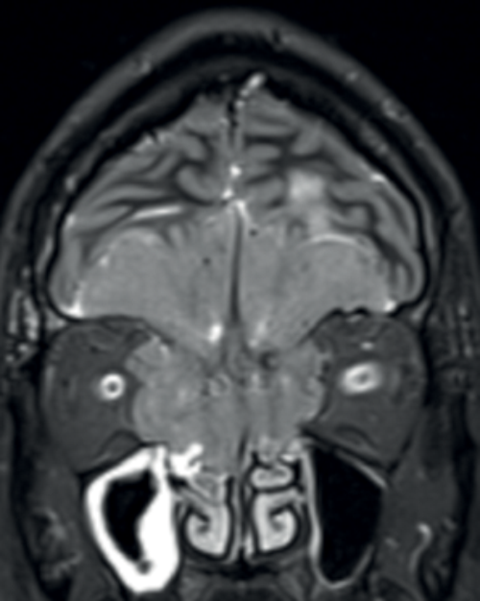 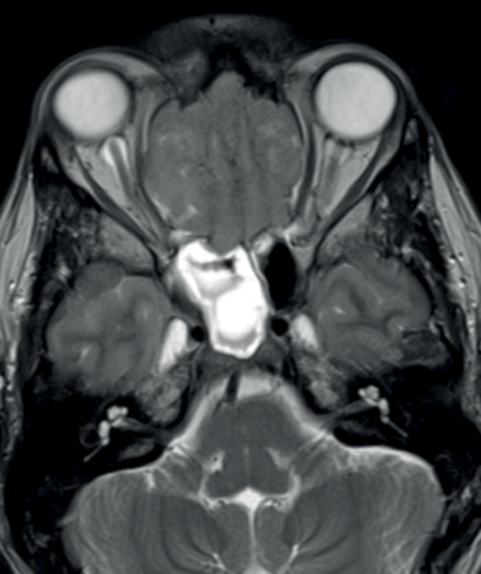 Figure 1 (top and above): MRI orbit with contrast in the (A) coronal plane and (B) transverse plane shows a large enhancing lesion centred on the cribriform plate extending up into the anterior cranial fossa. It is intimately related to the orbital apices and the canalicular portions of the optic nerves, which show prominent nerve sheaths bilaterally. The lesion is displacing the orbital contents laterally without invading the extraocular muscles. There is, however, loss of the fat plane between the tumour and the medial recti anteriorly suggesting that there has been breach of the lamina papyracea. 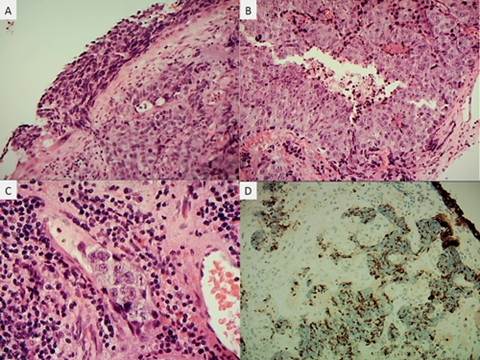 Figure 2: Histological sections from a biopsy of the right nasal cavity showing high grade malignant epithelioid neoplasm arising from dysplastic transitional epithelium (A), with necrosis (B), vascular invasion (C) and cytokeratin immunoreactivity (D). There was no neural or neuroendocrine differentiation or squamous marker positivity, effectively excluding the other main histological differential diagnoses.

On examination, the right eye was indeed proptosed by 3mm as compared to the left side. He reported vertical diplopia on looking up, more so when looking to either side. Slit-lamp examination of the anterior and posterior examination was entirely normal to both eyes and no disc abnormalities were seen. An emergency CT scan and subsequent MRI head with contrast showed a large tumour centred on the cribriform plate extending up into the anterior cranial fossa and orbits (Figure 1). An urgent biopsy from the right nasal cavity roof revealed high grade malignant cohesive epithelioid neoplasm with necrosis consistent with sinonasal undifferentiated carcinoma (SNUC) (Figure 2). At the following multidisciplinary team meeting it was decided to urgently re-admit the patient to the acute oncology ward to initiate combined chemo- and radiotherapy. So far no metastases were found.

SNUC was first described in 1986 and is a rare entity with fewer than 100 reported cases by 2005 [3]. It is defined as a highly aggressive and distinctive carcinoma of uncertain histogenesis that needs to be differentiated from lymphoepithelial carcinoma and olfactory neuroblastoma. There is a male predominance and a possible link with previous radiation therapy may exist [3]. Interestingly, when corresponding with the consultant pathologist about the depicted histology, he told me about an apparent local mini-epidemic of SNUC cases in recent years. While this may be a statistical anomaly or that SNUC has been under-diagnosed in the past he wonders if the increased local background radiation (perhaps related to radon gas) in the region may be in part responsible. Metastases can occur in cervical lymph nodes and distant sites (like liver, lung and bone) [3] but SNUC more commonly shows local destructive growth (most commonly into the anterior cranial fossa) at presentation without distant spread. Despite aggressive management with combined chemoradiation and radical resection, the prognosis is poor, with median survival of less than 18 months and five-year survival of less than 20% [3].

“It may be a good idea to investigate a unilateral proptosis sooner rather than later.”

This case shows that, in the hospital setting, we ophthalmologists may be once again the first port of call for patients with not only serious sight- but also life-threatening conditions. On reviewing the literature it seems not too uncommon that SNUC patients first present to our speciality as some published cases demonstrate [4-7]. In conclusion, it may be a good idea to investigate a unilateral proptosis sooner rather than later, not waiting four months as in this case.

The most peculiar thing happened when I was examining the patient in this large, sterile and draughty examination theatre in the A&E department. To the background noise of barked intercom messages, my patient’s wife started dancing a waltz with both their children, to the father’s and my great amusement. I sincerely hope this was one of many more waltzes that this father and husband will enjoy.

The authors would like to thank the patient for allowing the publication of his case and Mr Kwabena Frimpong-Ansah (Consultant Ophthalmologist) and Mr Nicholas Haden (Consultant Neurosurgeon) for helping with this report. 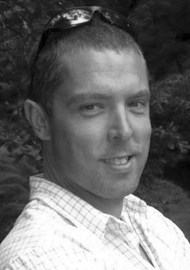