A 68-year-old Caucasian gentleman was urgently referred to eye casualty by his optometrist after seeing an unusual incidental finding of protruding lesions from the retina, suspecting choroidal melanoma. He was asymptomatic and this was his first eye test in 30 years.

His visual acuity was 6/9 in both eyes. The intraocular pressure was 8mmHg in the right and 9mmHg in the left eye and he had mild nucleosclerotic cataracts. Fundal examination revealed coalescing multifocal yellow-white raised irregular lesions in the superotemporal retina asymmetrically in both eyes (see Figures 1 and 2). 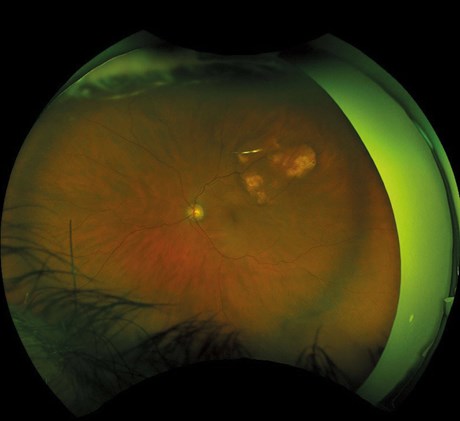 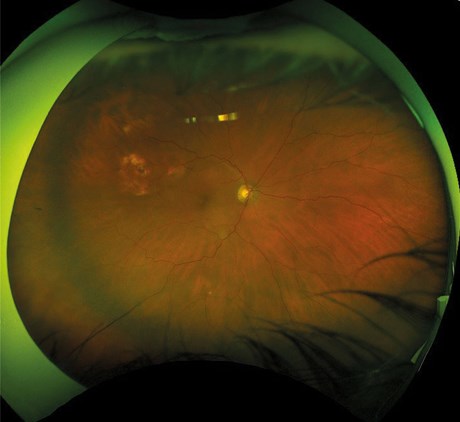 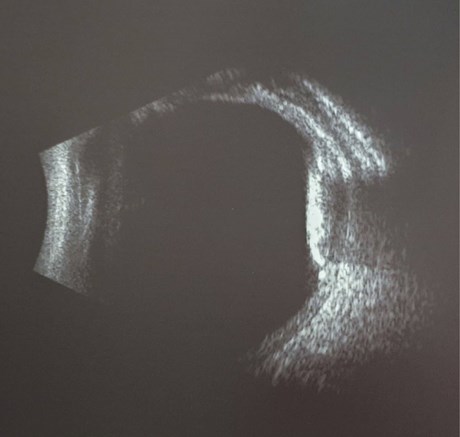 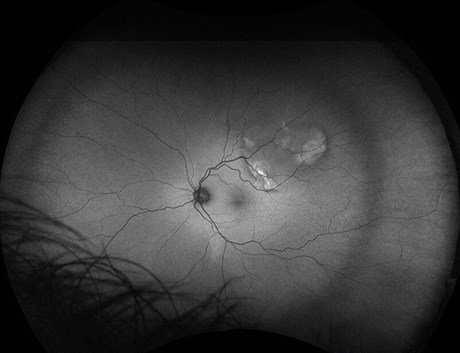 My differential diagnoses at this stage included choroidal metastasis and amelanotic choroidal melanoma (less likely as this condition was bilateral), however the appearance was unlike anything I had seen before. Ultrasound B-scan revealed highly hyperechoic lesions with high reflectivity at the sclerochoroidal interface and acoustic shadowing (see Figure 3). The thickness of the lesion in the right eye was 9.44mm in diameter by 2.24mm in thickness and 7.22mm by 2.07mm respectively in the left eye. The lesions showed autofluorescence with the red-free filter. The ultrasound findings did not fit with my initial thoughts, and a subsequent discussion with our medical retinal consultant clinched the diagnosis.

An 82-year-old Caucasian lady was found to have an incidental finding of bilateral superotemporal pale retinal masses, noted during a pre-op ward round for cataract surgery. Her past medical history included parathyroidectomy for hyperparathyroidism and osteoporosis. She had a visual acuity of 6/6 in both eyes (postoperative). Optical coherence tomography (OCT) showed a dense mass arising from behind the retina with some thinning of the retinal pigment epithelium (RPE) (Figure 5). B scan ultrasonography showed a choroidal mass with high reflectivity on the left and also a smaller lesion on the right. It was initially thought to be a choroidal osteoma.

Sclerochoroidal calcification is a rare ocular condition most commonly affecting older white individuals. It usually manifests as multiple irregular yellow-white subretinal lesions classically located in the superotemporal midperipheral fundus [1]. It can be unilateral or bilateral. The differential diagnoses include choroidal osteoma, choroidal metastases, choroidal amelanotic naevus or melanoma, lymphoma and granuloma. Despite its name, observation of enhanced depth imaging optical coherence tomography (EDI-OCT) over the lesions have shown that the calcium deposition originates from the sclera with thinning of the overlying choroid [2]. This is a key feature that differentiates it from the differential diagnoses that arise from the choroid.

Most cases are idiopathic, however, it can be associated with conditions affecting calcium metabolism. Shields et al. published a case series of 179 eyes with sclerochoroidal calcification, a proportion of which were associated with systemic conditions including hyperparathyroidism (27%), parathyroid adenoma (15%), Gitelman syndrome (11%) and Bartter syndrome (2%) [3]. Therefore, blood tests should be requested including calcium, parathyroid hormone level, and urea and electrolytes. The prognosis is good with no associated vision loss, lesion enlargement, subretinal fluid / haemorrhage, choroidal neovascularisation found at four-year follow-up [3]. Unlike choroidal osteoma, it has minimal risk of loss of vision.

Sclerochoroidal calcification is a stable deposition of calcium in the sclera. This rare condition is important to be aware of as without the correct diagnosis, patients with sclerochoroidal calcification may easily be subjected to various investigations in line with a suspected ocular malignancy. B scan ultrasonography and OCT over the lesion can assist diagnosis. Although usually idiopathic, it is important to arrange blood tests check for secondary systemic disorders affecting calcium metabolism. 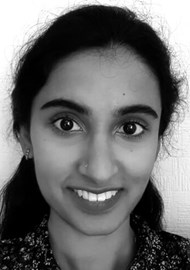