On becoming a man
By Jan Huelle

It was at the height of the gender debate, with Donald Trump banning transsexuals from serving in the US army and parts of the first world indulging in controversies on whether separate transgender toilets are needed, that a 40-year-old lady, or should I better say gentleman, walked through the office door and asked whether we could help to restore their vision.

The reason I cannot decide whether the patient is a he or a she is that s/he is in the end stages of preparing for her gender reassignment surgery from woman to man, and for that purpose was already having Testosterone 1000mg gluteal injections every three months. Shortly after the injection treatment was initiated around two years ago, the eye symptoms started with reduced vision (being 6/12 to both eyes when I saw her) and metamophorpsias. For comorbid ankylosing spondylitis and schizophrenia the patient was also on Pregabalin and Quetiapin. Prior to referring to us, the endocrinologist had arranged for an MRI scan, which returned entirely normal findings.

Figure 1: Optical coherence tomography showing right (a) < left (b) macular defects at the level of
the retinal pigment epithelium and above, and additional right intraretinal hyperreflectivity (a).

On the slit-lamp we saw macular dystrophies more to the left than the right eye, which seemed to be located at the level of the retinal pigment epithelium (RPE) and above as the optical coherence tomography (OCT) scans revealed (Figure 1). In addition, the right eye showed some unusual findings with intraretinal hyperreflectivity in the OCT scan, and increased background fluorescence in the angiography (Figure 2). The left, by contrast, demonstrated early hyperfluorescence during the angiography (Figure 2). 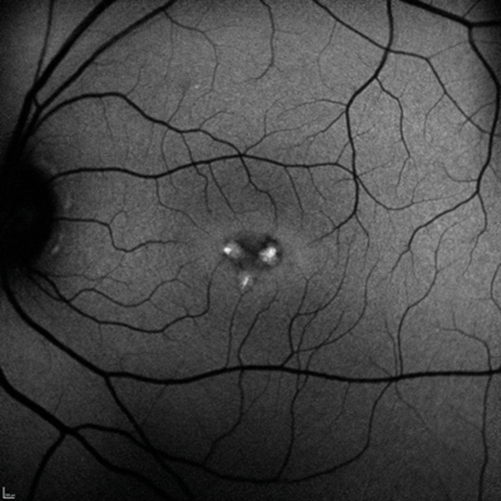 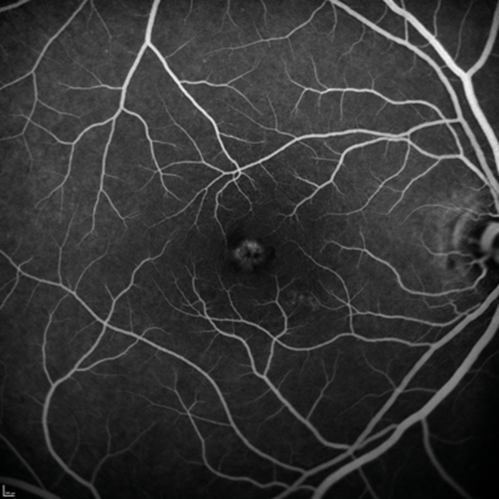 Hereditary fundus dystrophies like Stargardt’s or the spectrum of pattern dystrophy of the retinal pigment epithelium are unlikely to act as differential diagnoses because of the differing clinical presentation and the late onset in our patient. This leaves a possible toxic cause. Quetiapin has not yet been reported to have ocular side-effects and Pregabalin, although sometimes causing visual field defects or diplopia, has not been mentioned in the context of maculopathies [1].

It therefore seems most likely that the intramuscular Testosterone therapy is the culprit in this game. Testosterone, being the primary male sex hormone, is used in female-born transsexual persons for its desired virilising effects of promoting secondary sexual characteristics such as increased muscle mass, growth of body hair and deepening of the voice [2]. As an interesting side note, it was the neurologist Charles-Édouard Brown-Séquard (1817–1894), famous for his first description of spinal hemiparaplegia, who first found out about these effects when self-injecting a ‘rejuvenating elixir’ consisting of an extract of dog and guinea pig testicle, which restored his vigour and feeling of well-being [3].

The only retinal condition Testosterone replacement therapy has been associated with so far is central serous chorioretinopathy (CSR), when it was applied systemically for hypogonadotropic hypogonadism in a man and for fatigue in a woman [4,5], respectively. A case series, collected at two tertiary vitreoretinal care centres in the US, presented nine further cases of CSR in men being treated with exogenous, mostly topical, Testosterone [6]. The authors speculate that Testosterone may increase the choroidal blood flow and, secondarily, permeability, which in turn may damage the RPE resulting thus in CSR [6].

In conclusion, this report may be the first to describe a bilateral maculopathy of the RPE, which has probably been caused by Testosterone injections. But we shall never find out whether it is reversible because the patient understandably does not wish to stop the life-long injections, accepting the visual side-effects for the sake of living his true sexual identity as a man.

Acknowledgments:
The author would like to thank Prof Maya Müller and Mrs Silvia Bopp, Consultant Vitreoretinal Surgeons at Pallas Kliniken Zürich and MVZ Universitätsallee Bremen, respectively, for helping with this report, and the patient for allowing the publication of their story after having given formal approval and consent.