This is exactly the call you don’t want to receive at 11 at night. The A&E colleague phoned to inform me about a young man who was kicked several times in the face and could not see out of one of his eyes anymore. I asked for a fine CT orbit and brain and jumped into the car to go and see the patient.

The examination situation was quite remarkable, not only because it was in the middle of the night but also because the patient kept constantly swearing at us as soon as we came near to his eye. When we tried to examine it, he would repeatedly exclaim the above words in the title followed by various alternating verbal abuses to ourselves.

He was not (anymore?) under the influence of alcohol when he arrived at the hospital but still agitated, probably because of the fight that led to his injury. He presented with left upper and lower lid haematoma with some blood surrounding the lids and periorbital soft tissue swelling. He seemed to be in the greatest pain as soon as we tried to open his eye. Other than a low intraocular pressure (IOP) of 6mmHg the findings were entirely normal with prompt direct and indirect pupil reactions. There was no relative afferent pupillary defect (RAPD). Examination of the posterior segment was also normal with no vitreous, retinal or disc involvement. His visual acuity in that eye, however, was nulla lux. The CT scan did not show any bony fractures and the globe was intact with no hints of an intraocular foreign body, haemorrhage, gas or perforation. No retro-bulbar haemorrhage was seen and the optic nerve as well as the neurocranium showed no pathology (Figure 1). 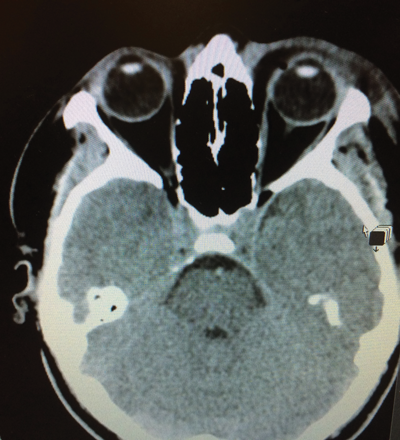 Figure 1: CT brain scan in the transverse plane shows left periorbital soft tissue swelling
with intact globe, no intraocular gas and no evidence of retro-orbital haematoma.
Both optical nerves appeared intact and no cause for left visual loss could be identified.

Apart from the lid haematomas and a marked low IOP this young man did not show any pathological signs that would have explained his total loss of vision in the left eye. Ocular hypotony has been defined as an IOP of 5mmHg or lower [1]. It is not uncommon to find very low IOPs after ocular trauma, which is thought to be secondary to ciliary body shock, which in turn causes a temporary decrease in production of the aqueous [1]. Indeed, our patient’s pressure reading was back to normal (as was his repeated fundus examination and the OCT scan) at his next visit the following day. Still, his visual acuity remained nulla lux and this did not change when he was seen again a week later. We therefore arranged electrodiagnostic testing but the patient did not attend this appointment.

You would think that this patient should have had an RAPD if he could not see any light. The usual causes of an RAPD are optic tract disease, chiasmal damage, pregeniculate lesions and unilateral optic neuropathies [2]. Indeed, a traumatic optic neuropathy can sometimes account for true visual loss without any evidence of globe injury. This can either result from direct or indirect optic nerve injury or from a disruption of its blood supply due to a compartment syndrome [3]. However, as this patient did not have an RAPD, these differential diagnoses seem unlikely. Could this patient, therefore, just have staged his sudden total visual loss?

There are various strategies to check for malingering and a brilliant video tutorial is provided on Timothy Root’s webpage [4]. For instance, you can try provoking a reflexive blink by flicking your fingers near the eye. One of the most successful techniques is to test for mirror-induced ocular pursuit movements. You hold a mirror in front of the eye (occlude the seeing eye) and gently rocking it will result in unconscious synchronous ocular movement if the eye can actually see (Figure 2). 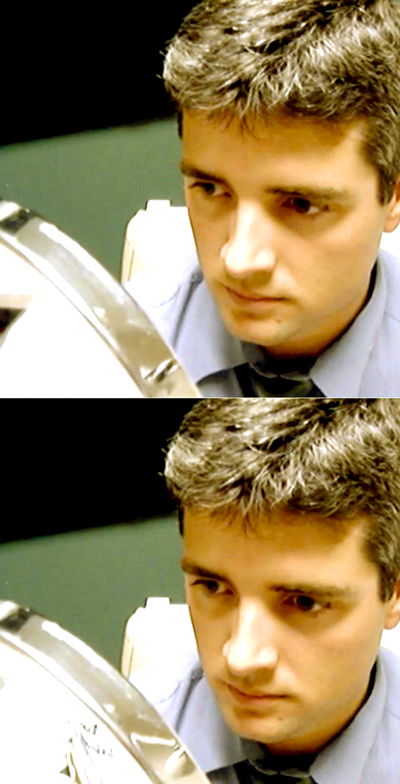 Figure 2: The mirror test. You turn a mirror horizontally in front of your patient’s eyes which you observe closely. It is almost impossible for a seeing eye not to pursue the reflections of the near and distant objects in the examination room that appear to be moving at the same angular velocity in the mirror. Make sure your malingerer is not fixating on a static target outside of the mirror. Use a large mirror to overcome this problem. Screenshots from [4] featuring its director Timothy Root.

Or, we can deceive the deceiver ourselves! If you ask your patient if he can bring both of his index fingers together until they touch, malingerers often fail on this because they think it tests their visual function, when, in fact, it queries proprioception, which should not be affected by the eyes. Indeed, organically blind persons have a robust sense of proprioception and perform usually very well on this task [2].

In conclusion, this case highlights that we should always consider the possibility that our patient may be a malingerer, which I feel is not too easy as you normally meet your patient with trust, trying to build a good relationship with him or her. However, when I think back to this patient’s repeated exclamations in the title, it does not take a linguist to deduce that, actually, he was not far from telling the very truth that he can see!