“Herr Doktor, I can’t see but I am driving”
By Anne Brueggemann

This 56-year-old lady was quite puzzling. With her own glasses and the pinhole she merely managed to see the 1.3 and 1.0 logMAR lines with her right and left eye, respectively (I am currently working in Germany again, so goodbye to snellen acuities for the time being). She was quite a vague historian and only noticed that her glasses didn’t seem to work that well anymore but told me that she was driving nevertheless! After asking her several times, she recalled that she possibly wore contact lenses once in the past but did not cope too well with them. Her optic discs caught our eyes a bit as through her small pupils they seemed glaucomatous.

Things became even more puzzling when we refracted her and she achieved 0.4 logMAR in the right with a -9.75/-4.50/160 correction and 0.2 with -6.25/-0.50/135 in the left eye, while her glasses only corrected roughly for -2.5D spherical equivalent with less than 1.0D of cyl in each eye. The contact lens history, a suspicious k-value of 48.0D in the left eye’s keratometry and the odd change in refraction let us think of a possible corneal problem and we arranged for a topography, which returned more or less normal (Figure 1). 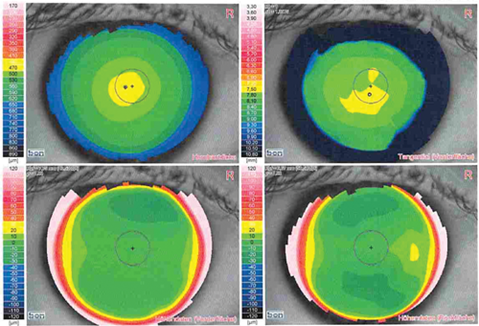 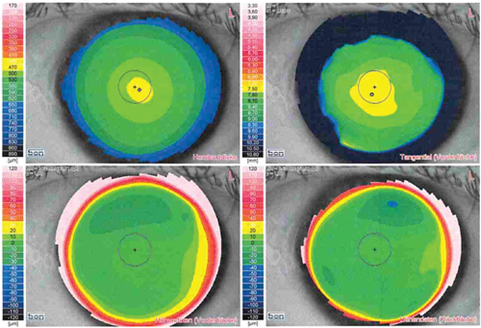 Figure 1: Corneal topography of the right (a) and left (b) eye excluding the initial differential diagnosis of a corneal ectasia.

It then crossed our minds to have a better look at the fundus and dilated funduscopy revealed indeed a possible macular hole in the right eye. The discs, with a better view now, did not look too cupped, though still with a possible temporal notch in the right eye (IOPs measured 12mmHg). The OCT of the macula then brought clarity, demonstrating right-sided myopic foveoschisis with epiretinal membrane and a lamellar hole (or early foveoschisis) in the left (Figure 2). Subsequently, the patient was listed for vitrectomy plus membrane peel and gas and is currently awaiting her operation. Her axial lengths in the preoperative assessment measured 27.31 and 25.01mm in the right and left eye respectively.

Figure 2: Optical coherence tomography of the macula demonstrating right myopic foveoschisis and
epiretinal membrane (a) and left either early foveoschisis again or a lamellar macular hole (b).

Myopic foveoschisis has first been described by Phillips in 1958 and has been rebranded more recently as ‘foveal retinoschisis’ by Takano and Kishi [1,2]. They define it as an intraretinal separation of the retina into a thinner outer layer and a thicker inner layer, most commonly between Henle’s fibre layer and the photoreceptor layer. Its reported prevalence ranges from 6% to 34% in patients with high myopia depending on varying geographic and population characteristics [3,4]. It almost always occurs in the presence of a posterior staphyloma [5], which makes our case appear as a bit of a rarity in that we observed foveoschisis in the absence of a posterior staphyloma.

As in our patient’s fovea (Figure 2a) the split retinal layers are usually joined by axially oriented columns bridging the space in between. Possibly, they also act as the last bridges of retinal signal transduction and this may well be the reason that we sometimes notice quite good vision in some of these patients. This differentiates foveal retinoschisis from its (unrelated!) cousins juvenile (X-linked) retinoschisis and degenerative senile retinoschisis, where function is lost due to complete anatomical separation. Despite a few case reports of spontaneous improvement [6], foveoschisis, if left untreated, tends to lead to macular hole formation with resulting severe central visual loss [5].

Common practice is now to consider surgical intervention for myopic foveoschisis when there is progressive visual decline. The standard treatment is vitrectomy and gas tamponade with or without peeling of the internal limiting membrane (ILM), with reported anatomical success rates of over 80% [5]. Some interesting technical refinements of leaving a bit of residual ILM behind around the fovea have recently been described with good success rates [7,8]. The rationale being to reduce the risk of subsequent iatrogenic macular hole formation, because remaining fine processes of the Müller cells can thus help to maintain intact photoreceptor cells in the foveolar area.

This rare case of foveal retinoschisis without posterior staphyloma shows again how important it is not to get side-tracked (as we did) when several findings point to different pathologies. Getting excited about a possible corneal problem seduced us to investigate this further instead of first completing a proper basic slit-lamp examination with dilated funduscopy. It also reminds us to ask our poorest seeing patients whether they actually stopped driving, when we may falsely assume otherwise. Our lady agreed to stop driving until after her operation, when a new pair of glasses will hopefully help her to meet the driving standards.

The authors would like to thank the patient for allowing the publication of her case and Mr Erik Domeier, Consultant Ophthalmologist (specialising in surgical retina) at Augenpraxisklinik Lübeck, Germany, for helping with this article. 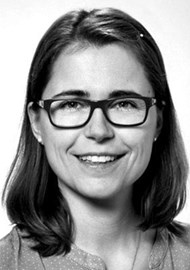