An 89-year-old lady with dementia was referred to me out of hours by her GP with a few days history of an angry looking left eye for suspected elevated intraocular pressure (IOP). I discovered that this lady first presented to us six days before, with a week history of counting finger vision and an IOP of 55mmHg. She was treated for acute angle closure with intravenous acetazolamide, topical anti-inflammatories, anti-hypertensives, Pilocarpine 2% and bilateral peripheral Yag-laser iridotomies (PIs) the day after initial presentation.

The eye looked indeed inflamed with mixed conjunctival injection, a staining superficial corneal infiltrate of 1mm diameter, 2+ of fibrin in the anterior chamber and a brunescent cataract behind an ischaemic looking iris. To my surprise, I could also see a 1.1mm hypopyon. Due to stromal oedema and descemet folds, an assessment of the angle, fundus and optic disc was not possible. Her IOPs were 13 and 16mmHg in the right and left eye respectively and she was still using Pilocarpine 2% TDS (alongside three IOP lowering agents) and Prednisolone 1% QDS (which was added after the PIs). 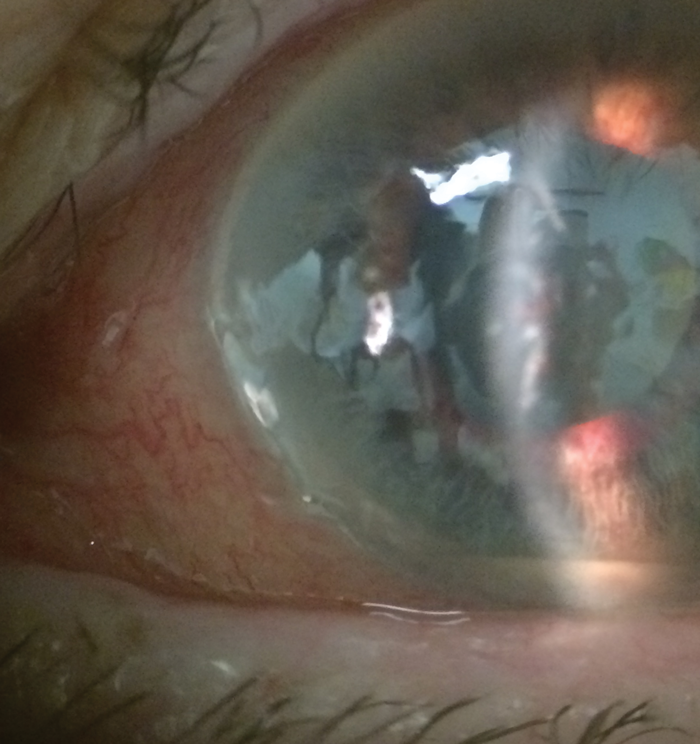 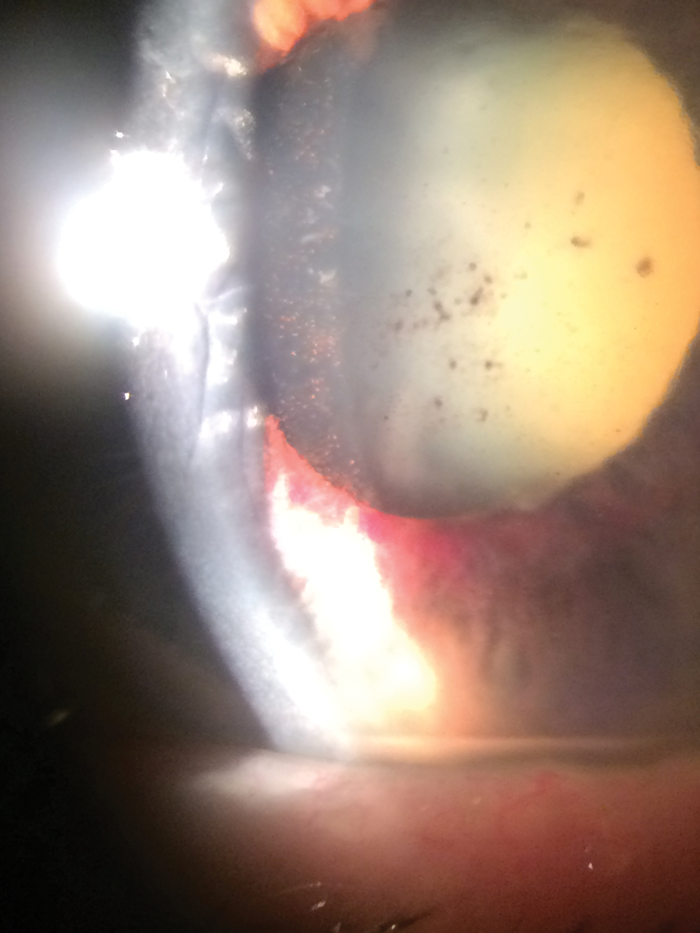 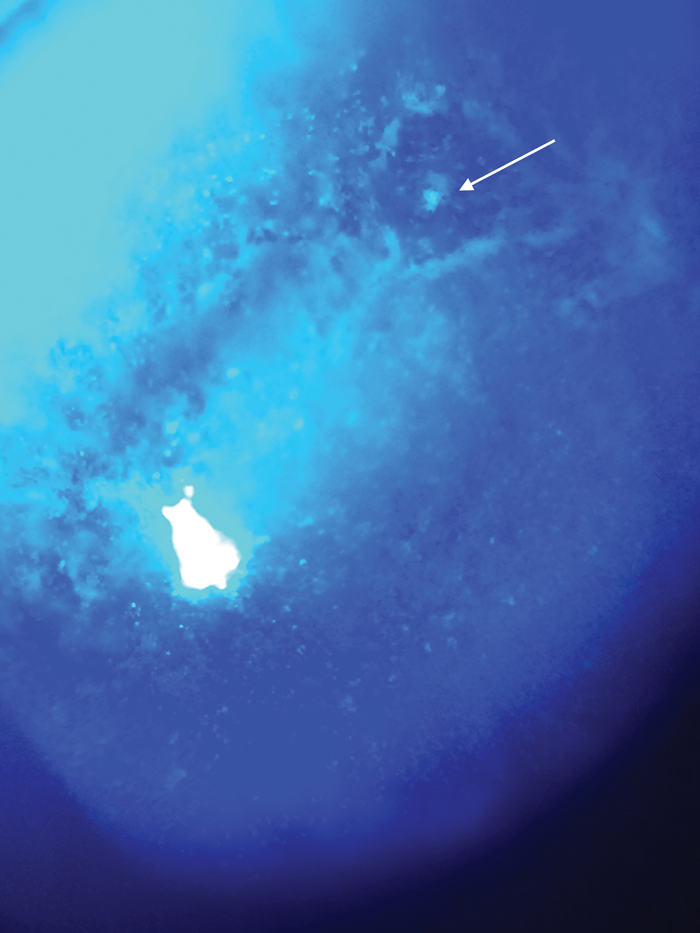 Figure 1: a) Left eye presenting with a 1.1mm hypopyon on day six after Nd:YAG peripheral iridotomy for angle closure. b) Retro-illumination highlights descemet folds, iris hyperaemia / rubeosis on the pupillary margin and signs of the previous attack with iris pigment and Glaukomflecken on the brunescent lens’ anterior capsule.
Figure 2: Slit-lamp picture with blue illumination filter demonstrating an area of minimimal residual corneal staining with fluorescein in a previously suspected area of corneal infiltration and mild thinning (white arrow).

We started her on additional hourly Ofloxacin 0.3% for a presumed comorbid keratitis. The next day, the fibrin had gone but the hypopyon could still be seen (Figure 1). The corneal lesion looked much improved and was hardly visible anymore (Figure 2). The Ofloxacin was then stopped and the Prednisolone increased to hourly intervals following a subconjunctival injection of Dexamethasone. Pilocarpine was discontinued. The eye continued to settle following this treatment. At her review a week later, the left angle showed synechial angle closure despite a patent PI, whereas the right eye’s angle was open. She was listed for left cyclodiode laser and right cataract surgery with lens implant under general anaesthetic.

Glaucoma is the world’s leading cause of irreversible blindness and angle-closure accounts for 50% of all those cases, making it probably the most visually destructive form of glaucoma [1]. Previous publications on angle-closure are difficult to compare with each other as there was no uniform definition and specific diagnostic criteria. For this reason the EGS has recently adopted a new classification in their latest guidelines (Table 1). The role of laser PI as first-line treatment of angle closure has recently been challenged by the EAGLE trial, which found that clear-lens extraction was associated with better clinical and patient-reported outcomes than PI, highlighting the fact that age-related growth of the lens plays a major part in the pathophysiology [2].

The presentation of a patient with hypopyon in an eye with angle closure is an extremely uncommon finding and only four cases have been reported so far [3-5], in one of which, interestingly, keratitis was also suspected early in diagnosis [4]. The authors suggest post-ischaemic vascular leakage of leukocytes into the anterior chamber as the cause of the hypopyon [3-5]. Three additional cases have been reported where a transient hypopyon was seen after argon laser iridotomy, two of which showed rubeosis iridis so that ischaemia may have played a role in those cases as well [6,7].

Two factors may have contributed to the formation of the hypopyon in our patient.

First, our patient was continued on Pilocarpine even after the PIs had been performed. As Pilocarpine has been found to increase inflammation by breakdown of the blood-aqueous barrier, it should be avoided in conditions where it is already compromised, such as in uveitis or after surgery [8].

Secondly, there is also the possibility of leakage of lens protein, either as a direct result during the PI with the laser damaging the capsular bag complex and / or by the cataract having progressed into a phacolytic stage. However, the latter tends to be associated with an open angle and a hypermature cataract, which were not present in our patient.

To our knowledge this is the first report of such a case occurring after Nd:YAG laser PIs. It offers three learning points. First, because of its rarity, the finding of a hypopyon and possible corneal infiltrate in acute angle closure may present diagnostic and hence therapeutic difficulties. Secondly, it may be prudent to stop Pilocarpine in cases where its efficacy is questionable, for example, in a case where there is established iris ischaemia in chronic angle closure and following laser iridotomies. Thirdly, it may add support to the practice of some ophthalmologists, who prescribe more frequent steroids after PIs, e.g. two-hourly Prednisolone 1% instead of the commonly advocated QDS dosage [9].

Acknowledgments:
The authors would like to thank the patient for allowing the publication of her case and Mr Jonathan Rossiter, Consultant Ophthalmologist at Musgrove Park Hospital, Taunton, for helping with this article. 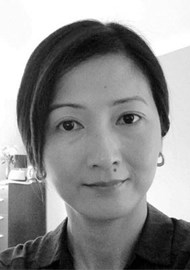